Is Love Enough? Sir explores the nearly invisible area of class distinctions which is taken as a “given” and therefore, is presumed to be absent in our sharply defined class-based society.

The tagline “Is Love Enough?” underscores the significance of the term “Sir” that suffices to point out to a relationship that is limited by severely restricted social limitations. It is a relationship between a young housemaid and her employer.

The film, that marks the directorial debut of Rohena Gera was screened at the Cannes Film Festival 2018, in the section La Semaine de la Critique. The film is supported by the Gan Foundation for Cinema, whose Broadcast Award supports the first works of young filmmakers.

Ratna (Tillotama Shome) comes from her village home to work as a housemaid in Mumbai at the home of Ashwin (Vivek Gomber), the son of a successful and affluent businessman who lives away from his parents in a spacious apartment on a high-rise in the city.

Ashwin’s driver tries to persuade Ratna to leave her present job because “people will talk” obviously referring to the rather awkward sharing of a young man and a young woman the same roof for whatever reason. But Ratna declines and insists she will stay on and is not bothered about gossip.

Lakshmi (Geetanjali Kulkarni), a maid in the same complex, becomes her close friend. They go to the market together and those are the only outdoor scenes in this very ‘indoors’ film.

Over time however, despite the purely professional behaviour of Ratna, Ashwin feels attracted to her for her sense of dignity, self-respect and ambition – she wants to become a fashion designer. Ratna tells him that she was widowed at 19 but is determined to move on and keep her widowhood behind.

This comes across when in the bus that carries her to Mumbai, she takes colourful glass bangles out of her purse and wears them. On her way back to attend her sister’s wedding, Ratna takes off the bangles and puts them in her bag. She does not believe in widowhood but has to stick to the rules in the village.

The finer nuances of the boss-maid relationship are fleshed out very realistically without any pomp or show of any kind. Ashwin likes her and tries to interact with her at a more personal level. But Ratna knows where exactly to draw the line which she does, and reminding Ashwin again and again about the limits of their relationship through her withdrawn body language, walking with a slight slouch, correcting the pallu of her sari when needed, talking softly and waiting at a distance while he eats.

She also joins tailoring classes to fulfill her dream of becoming a fashion designer. The first physical suggestion that she reveals, unwittingly, is when she stitches a colourful shirt for Ashwin and gifts it to him on his birthday. She is both surprised and shy when Ashwin wears the shirt at his workplace and she shyly reminds him that he should not tell anyone about the source of the shirt. It is a lovely scene handled with wonderful restraint by director Gera.

Ashwin grows impatient about controlling his growing feelings for her. The class distinction he says, does not bother him but she tells him flatly that it does bother her. She takes a few days leave to attend her sister’s wedding who she was paying the school fees for and Ashwin keeps calling her which reminds her that this has to end.

Does it end? One has no clue except that soon after her return from her leave, Ratna decides to quit and live with her sister while she looks for another job. This is a film where the director and the script could have gone any which way to unfold sexual layers even through suggestion, or harp on some clue on sexual harassment at work, or, Ashwin’s parents cutting in. But none of this happens because the director never allows them to.

Gera allows the scenario to evolve a rhythm of its own, matching the slow and silent spaces that the film defines. There is a beautiful quietude that envelops the film from all sides with frequent forays into the terrace from where “you get a view of the entire city” she tells Ashwin who has no clue about this terrace space of his own apartment. When Ashwin gifts her with a sewing machine, Ratna caresses it as a mother would caress her child but is very uncomfortable with the gift.

The lighting orchestrated by the cinematographer moves fluidly from dark shades to lighter ones, sometimes, a slice of light falling on Ashwin as he has his tea, keeping Ratna in the shadows.

The performances are outstanding by the two protagonists – Tilottama who is one of the most versatile but underutilised performers in Indian cinema as Ratna and Vivek Gomber as Ashwin.

Even the two-minute roles such as the fashion designer portrayed by Anupriya Goenka who insults Ratna at the party and later praises her work and employs her, are very good and are kept in the background as much as possible.

The film also brings out the insulated, isolated and alienated lifestyles of the multi-storeyed housing complexes in Mumbai where the neighbours probably have never met and it is only the supporting staff such as the security man, the driver and maids interact in their small world within the larger one.

The music is low-key and good but the two songs on the sound track could have been done away with. Ratna’s back story in instalments coming from her evoke surprise in Ashwin who is completely ignorant of the society she comes from.

It is sad that the film got its theatrical and OTT release two long years after it was made in 2018 but though the film is absolutely without any cliches whatever, one must say that it is better late than never.

What a soothing, fell-good film but a brilliant one too with an outstanding closure that keeps you guessing. 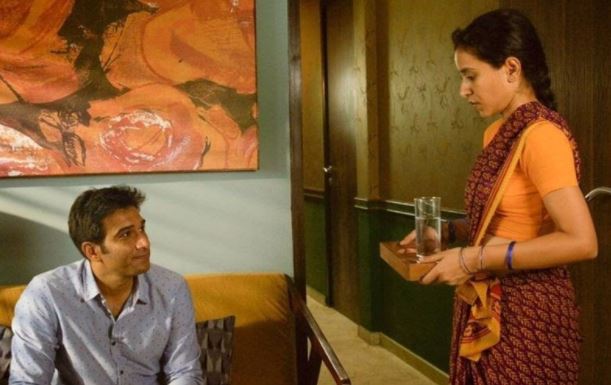