The 26th KIFF that concluded recently is perhaps the first International Film Festival to have been held in concrete and real terms at the Nandan complex after and during the pandemic and the scare of Covid 19. Thus, the ambience was different from what it has been like in previous years.

The festival was stripped of delegates beyond Kolkata shores – from other parts of the country and from beyond Indian shores. Posters of old film classics from Bengali, Hindi and International cinema had digitally covered the lower half of the actors’ faces with face masks. They looked strange but one learnt to live with them through the seven-day festival. The crowds on the complex were much thinner than it is in other years. The complex grounds did not pride themselves with food stalls and tea stalls as it is in other years. There was just a single snack stall and a couple of tea stalls for the public.

At each entry point, the security staff checked the temperature of the delegates and guests and entry to everyone was declared to be free to anyone who could register at entry point or had registered online. In other years, delegates have to stand in long queues, fill up forms and pay a handsome entry fee to obtain a card for the festival screenings.

This was followed by the sanitation exercise and as one stepped into each theatre, one witnessed every alternate seat tied up and glued to its back to maintain social distancing. Not a single person was permitted entry without a mask.

Some films drew a full house with viewers who could not get seats forced to sit on the floors waiving all rules of “social distancing.” This was most common in the Retrospective and Tribute sections than in the main screenings. It was physically not possible for the security men and the ushers to physically remove these film-crazy men and women. This is a regular feature but this year being an exception, one would have expected things to be different. But the film-crazy Bengali can never be expected to act differently.

This year, the number of entries was less than half of what happens in regular years. The screening programme listed 82 feature films, 50 short and documentary films with entries from 45 countries topped with tributes to Soumitra Chatterjee alongside and exhibition on the life and works of the multi-talented actor, an exhibition on the life and works of the noted Italian master Federico Fellini who was given a centenary tribute which was very popular among the film buffs, and another exhibition on the famous French filmmaker Eric Rohmer who was also a screenwriter and a film critic.

Among Indian tributes can be counted the screening of Basu Chatterjee’s Chhoti Si Baat, and centenary tributes to Pandit Ravi Shankar, Hemanta Mukherjee and Bhanu Bandopadhyay with the screening of one film each in which these personalities were involved. These exhibitions were held at the Gaganendra Pradarshashala including the Fellini exhibition. 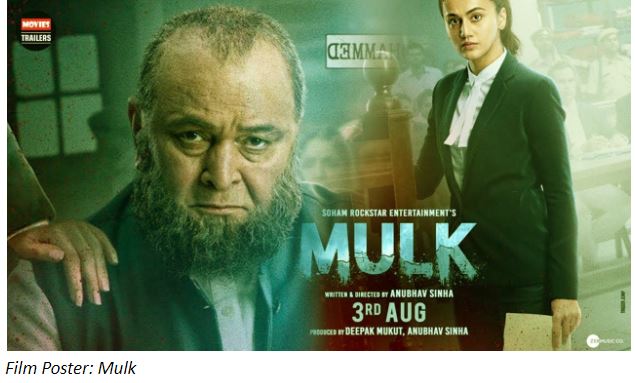 As a special initiative, a celluloid tribute was paid to the memory of Swami Vivekananda under the special category “Youth Day Celebrations.” This covered four films namely You are the Creator of Your Own Destiny (1978) directed by Nityanand Datta, Swami Viveknanada (1964) directed by Nirmal Dey, Bireswar Vivekananda (1964) by Madhu Bose and Biler Diary (2017) directed by Biswarup Biswas.

The Satyajit Ray Memorial Lecture was this year delivered by Anubhav Sinha whose Mulk was screened at the fest. The topic given to him was Social Responsibility and Mainstream Indian Cinema. However, he approached the subject by dissecting each word in the topic separately instead of approaching it as a holistic concept which it is. This revealed a lack of homework and the end result was disappointing.

Of the ten feature films screened in Indian Language Competition section, the one that pulled a full house at both the screenings of the film was Avijatrik – The Wanserlust of Apu in Bengali directed by Subhrajit Mitra. The director has taken a very bold step by picking up from where Satyajit Ray signed off his third Apu Trilogy – namely – Apur Sansar. In the original novel by Bibhuti Bhushan Bandopadhyay, the novel was called Aparajito and Mitra picks the second half of the novel with Ray did not touch. Shot in Black-and-White, with brilliant cinematography, Avijatrik follows the widowed Apu (Arjun Chakraborty) journeying with his little son Kajol, and trying to establish himself as a writer through his journeys. 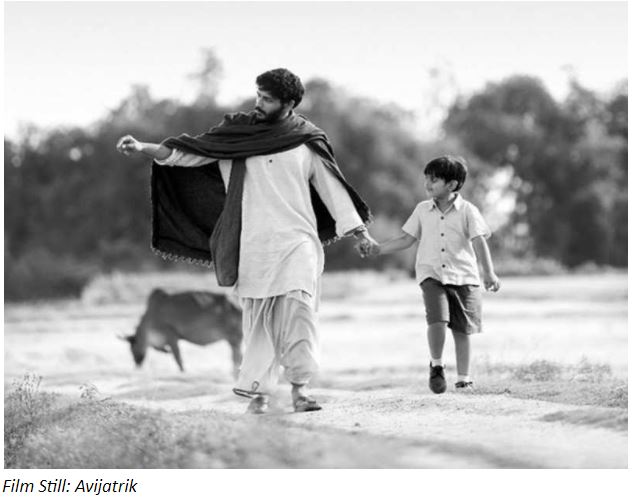 Kosa (Hindi) directed by debutant Mohit Priyadarshi is a very hard-hitting and no-holds barred film that unfolds the story of a 17-year-old Dalit boy Kosa Muchaki, an innocent victim of the political, anti-Dalit and casteist political and police structure who is finally killed by the powers-that-be only because they mistake him for being a Maoist which he is not. With dim lit cinematography throughout the film, the film captures the entire socio-cultural and politico-economical space of the area, where people are steeped in poverty, and a young boy loses his life only because of mistaken identity.

Biswajeet Bora’s Assamese language feature God On the Balcony inspired from real life incidents of death and the struggle of the family to perform her last rites is a reflection on the state of health care and human rights in India. It is the story of a husband’s long struggle to take his badly injured wife to a faraway hospital along with his daughter by tying her body to his bicycle and walking to the hospital. But when they tell him that the wife is dead, they lament the lack of an ambulance and he has to carry the body right back to give her a decent burial.

By then, two journalists smelling a hot story in this human drama, spread the news attracting local politicians to use this story as a political platform for electoral motives. But the bereaved man takes a different route and cremates his wife with the quiet dignity she deserves. Biswajit Bhora won the Best Director Award in the Indian Film category at the Festival. 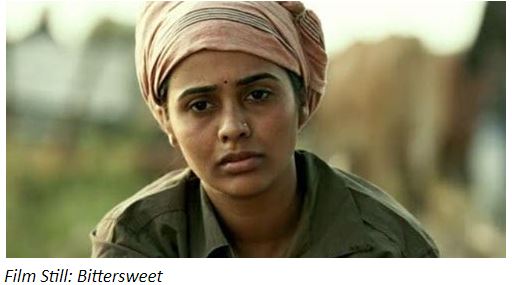 Ananth Mahadevan’s new film Bittersweet in Marathi, explores through the eyes of a very young girl, Suguna, the tragic lives of young and biologically productive women working in the sugar farms of Beed in Maharashtra. Lakhs of cane cutters migrate to western Maharashtra from October to March, the cane cutting season in the sugar belt. As the drought in the region intensifies, the migration also doubles. Contractors have a problem with the menstrual cycle of the women because it hinders the course of work. To get rid of this, Beed women find it better to remove their uterus instead of going through the threatening consequences. The contractors draw up contracts with the husband and wife counted as one unit.

False Eye in Malayalam directed by Rahul Riji Nair won the Best Film Prize in the Indian cinema category. This offers a unique perspective on the use of the videocam and its difference when handled by small boys and when handled by a manipulative adult. The videocam is a character in the film.

The NETPAC Jury for Asian Cinema handed its prestigious award to the Bangla film The Salt in the Water (Bangladesh) directed by Rezwan Shahriar Sumit. The film explores the lives and struggles of a little-known fishing community in Bangladesh.

Bander Band an outstanding film from Iran directed by Manijeh Hekmat ran away with the Best Film Prize in the section Innovation in Moving Images. The story has been shot right across Iran during the terrible floods. It revolves around a three-member band which comprises a married couple where the wife is heavily pregnant. They have to travel to Tehran to deliver their first performance. But there are severe blocks along the way with the flood waters, the road blocks, a broken bridge and a favourite guitar floating on the flood waters, and in the end, looking at their empty van, we are left wondering whether it was just a dream of a journey all of us want to make but do not. It overwhelmed the audience which responded with pin drop silence. The prize amount was Rs.51,00.000.

Shambala from Kyrgystan is about a myth believed by a little-known tribe in the country who consider a deer to be their “earth mother.” A little boy glimpses this deer and asks his father about it. The deer forms the fulcrum of the story and the film. The way the little boy perceives the deer – which may be real or imaginary or just a myth – and the way its story goes around, impacting on the lives of the community for generations together evolves into one of the most beautiful films in the festival. It rightly bagged the Best Director Award in the Cinema of Moving Images section for Artykpai Suiundukov.