The title is supposed to be symbolic of the protagonist Anuradha, a famous star-turned-Odissi dancer who cannot utter a sentence without using cuss words much to the shock of those around her. Kajol, who cannot dance to save her life, portrays Anuradha, a dancer who, throughout the film, is never seen actually performing on stage or rehearsing at home except for a few steps in one performance.

This reveals the intelligence of the director Renuka Shahane to capitalise on the brilliant acting talent of Kajol and subsume the dance within that acting.

If characters are taken to symbolise the three women, then Naina (Tanvi Azmi), who plays Anuradha’s mother, symbolises abhanga a mudra in the Odissi style of dance, because she shifts her focus from her family to writing and never turns away from her writing though her children turn away and also pay a price for their mother’s casual indifference.

Anuradha herself tells Milan (Kunal Roy Kapoor) who is videographing Naina’s autobiography without pride or embarrassment, that she is tribhanga as her life and lifestyle go in different directions and adds that her daughter Masha (Mithila Palkar) is the epitome of balance so she represents samabhanga.

This, however, does not resolve the dilemma of the two women, a mother in coma almost right through the film and appearing only in flashbacks, and her daughter who has cut off all ties with her mother as her expression of revenge for destroying her girlhood either by not noticing or not taking action against an abusive step-father who regularly abused the growing girl.

Tribhanga unspools the story of a mother and daughter who are pitted against each other but continue to live life on their own terms. Naina is so obsessed with her writing, a passion with her, that she does not blink an eye to leave her very considerate and understanding husband when she realises that wifehood is a block in her dreams of becoming a successful writer.

She leaves her marital home with her two small children in tow and the faithful maid to become a famous writer indifferent to what happens to her husband and his mother afterwards. Anuradha, the daughter, pays a very heavy price for her mother’s indifference and as a result, the boy too, grows up to turn to spiritualism but sustains a deep bonding with his sister.

The pace of the film is dynamic and as filled with action as it is with dialogue with the artificial respirators in the room where Naina lies in coma points out the real world everyone is living in.

Anuradha becomes a famous actress and then a noted Odissi dancer who is equally negligent of her daughter who is the victim of severe insults a school because of her mother’s openly promiscuous relationships with different men when her foreigner and abusive husband is forcibly shooed out of her life. She has more relationships with other men but none of them last for long.

Her entire anger for everything that happens to her is vented on her mother she addresses by her first name Naina and cuts off so finally that she is unaware that her mother cannot write as her hands are crippled with arthritis and that is why her autobiography is being recorded.

The dramatic turning point of the film comes soon after the film sets off, when Naina, during dictating to Milan, a researcher recording her autobiography on video, with a glass of whisky or some such drink in her hand, suffers a massive cerebral attack and goes into coma. Anuradha rushes in with her pregnant daughter Masha and son-in-law in tow but does not seem nervous or anxious about Naina’s critical state of health. She holds a cigarette in one hand and the packet in another and screams at her daughter that she will not light up as she knows she should not smoke when Masha is pregnant. She throws cuss words right, left and centre and even rebukes the very sober and serious Milan for talking in pure Hindi and wincing at her vulgarities.

Anuradha’s saintly brother Robindro (Vaibhav Tattwavadi) as the spiritual minded young man, is another balancing factor in Anuradha’s life. Slowly, Milan gets to understand Anuradha and they begin to share a rare bond where their languages merge into each other’s in the end, symbolising perhaps, the final maturing of Anuradha who does not seem to have come out of a prolonged adolescence.

It remains for her daughter Masha to point out that Anuradha is just like the mother she hated all her life. Masha visits her grandfather for the first time only to find out that he is struck down with Alzheimers and does not recognize anyone. So, it is for Masha to pay the price for her grandmother’s and mother’s decision to live life entirely on their own terms.

The questions that arise are – why did Naina agree to marry at all if she found family responsibilities a big hurdle? Why did she go to court to give her children her maiden surname? Why did she not pay attention to the kids once she took them along with her though her husband pleaded with her to keep them with him? She got the Sahitya Akademi award for her first novel which was turned into a National award-winning film but she failed miserably as a single mother. How and why could she not see that her daughter was being regularly abused by her second husband?

Anuradha, instead of learning from her mother’s experience that bore down on her growing years, follows almost the same routine such as attending Masha’s PTMs with a different boyfriend each time. Or, using cuss words liberally to vent her anger and behaving as rudely and as arrogantly as possible with everyone she comes across, mainly Milan who is videographing Naina’s autobiography.

Is it because he is close to Naina? Neither of them is a “man -hater” as Anuradha insists but she fails to hold a relationship with a man much like the mother she hates so much. The only man Anuradha jells with is Raghav (Manav Gohil) her assistant/secretary who accepts her for whatever she is, cuss words and all.

Masha, as if to “compensate” for all her mother and grandmother have done and also, to set a different example, defines her life as a very traditional daughter-in-law who loves to cover her head even when she is talking to her in-laws over the ‘phone and she tries to persuade her mother that she actually finds her life very fulfilling.

Though Tribhanga is a story that goes deep into the finer nuances of a rather radical mother-daughter relationship, it is also a strong, character-driven narrative which seems to have been picked with care to fit Kajol, one of the most talented actresses we have had in Indian cinema, to pour herself into the mould of Anuradha. Kajol lives up to the challenge as only she can. Her body language, her gait, her dialogue delivery, her ever mobile face that crinkles up in a smile and the next minute, flares up in anger when the media chases her in the hospital compound, throws up an award-worthy performance. Memories of her childhood abuse haunt her like an unceasing nightmare throughout her life.

The very underutilised Tanvi Azmi as Naina shows once again what wonderful histrionics she is capable of by embellishing the character with a palette of emotions rushing into one another. She wants to be a good mother but by the time she realises it, it is too late. “Is there some living left to live?” She asks Milan and answers it herself. “No” she says, “There is a lot of dying to do” to which Milan says that talking about death does not suit her. A touching scene among many in the film.

Pleasantly however, the men except the stepfather of Anuradha and her Russian husband/boyfriend, the men in the story are vested with positive and responsible shades and values. Masha who chooses to tread the regular line of life, is fleshed out very well by Mithila Palkar who ought to have been given more footage than she has. Shweta Mehendale as the younger Naina fleshes out her character with just the right blend of anger, rebellion and obsession for writing that makes her blind to her worldly responsibilities.

There is a moving scene of a party in the young Naina’s home to celebrate her success as a writer and we see her husband waiting like a wallflower with a drink in his hand. Kunaal Roy Kapoor in an out-of-the-box role as Milan is very good. His obvious discomfort at the strange relationship between and among three generations of women is clear in every scene which he teaches himself to get used to. Vaibhav Tattwavadi is also very good as Naina’s son who too, has never forgiven his mother for snatching their childhood and their father from them which makes Tribhanga a truly performance-backed film.

Baba Azmi’s cinematography captures the different moods, colours, setting and ambience of the shifting moods of the film moving from the very middle-class working household of the younger Naina’s family to the well-lit interiors of the make-up room at Anuradha’s aborted dance performance, the starkly lit interiors of the hospital, the lavish apartment of Anuradha and so on beautifully. There is very little of outdoors in the film.

However, one wonders what Renuka Shahane who has written and directed the film wants to say. Does it point out to the grim reality of how women, till today, have to pay a very heavy price for living life on their own terms violating the usual norms patriarchy has underlined for them?

Or, does it state without fumbling around, that patriarchy or no patriarchy, women cannot really afford to break social taboos never mind Anuradha insisting that marriage is social terrorism because, the children also are made to pay the price for their mothers’ choices though they have no part in this social rebellion. Fathers behaving similarly are not indicted because they simply walk away, never to return. 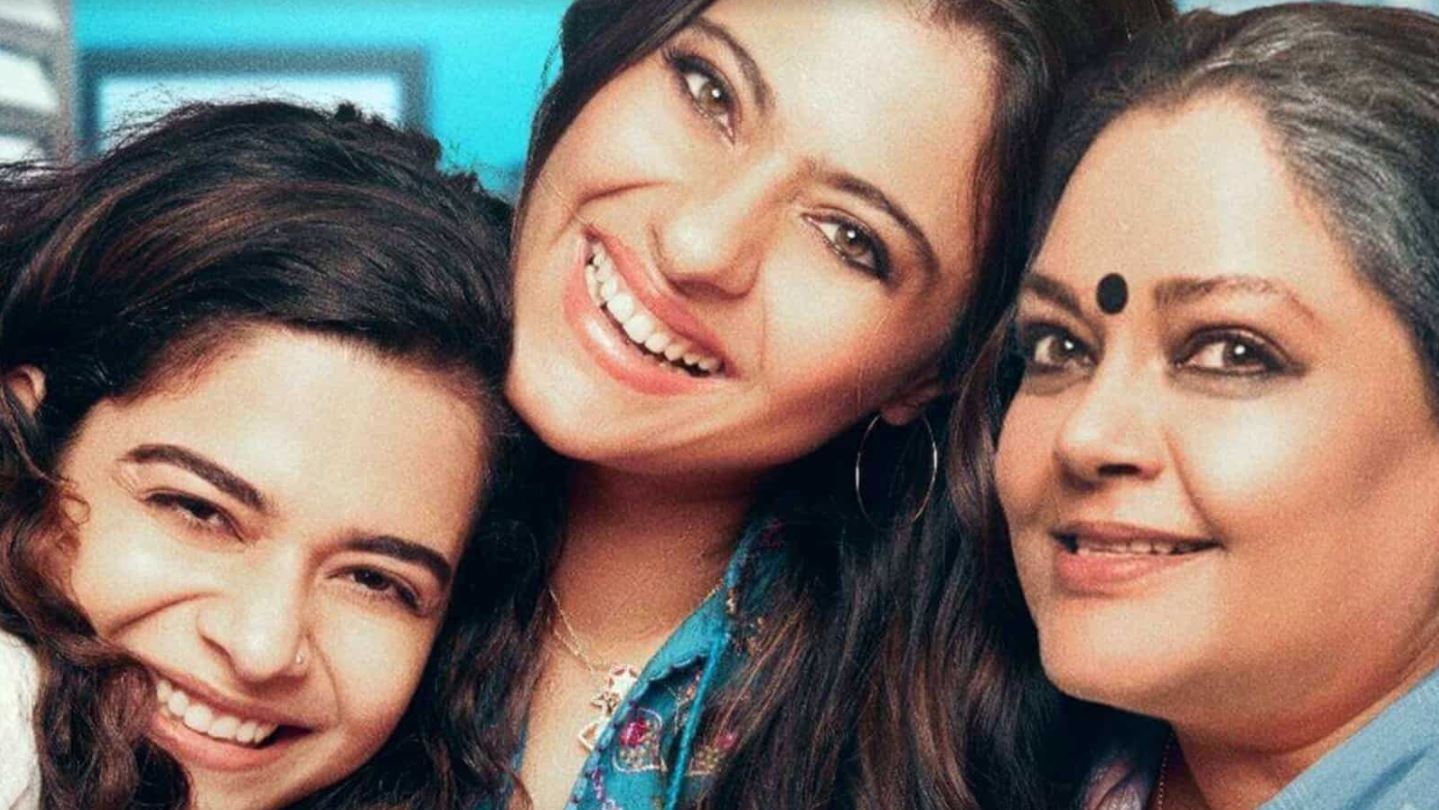