Love and Longing in the Poetry of Iftikhar Arif

Arif does not live in Lucknow any more but his verses do. Over decades, the poet’s words have returned to where they were born to inspire a host of contemporary poets here. Mumbai based Faridoon Shahryar, poet and entertainment journalist paid his tribute by singing a three decade old poem by Arif, while others plan to call the 77 year old poet on the phone today.

“I love his poetry but I also spend hours listening to Iftikhar Arif saheb talk about life,” says Shahryar who watches Arif’s interviews online over and over again and learns a lot on what to say in public, and how to address audiences without being aggressive.

Abhishek Shukla is an attractive voice heard in Lucknow today. The 1984 born poet sometimes talks to Arif on the phone. Abhishek told me that listening to Arif is like flipping through the pages of a beautiful book on life. Every word that the older poet says to him is a lesson.

Himanshu Bajpai, 34, writer and storyteller admits that Arif may have countless fans around the world but he feels like the poet’s most ardent fan.

The soul of Urdu poetry is love. And Bajpai finds the intensity in the way Arif expresses love, very attractive.

Bajpai lives in a Lucknow neighbourhood close to where Arif had lived more than five decades ago. It is easy for Bajpai to identify with the beauty, intensity and sobriety in the poetry of Arif. He admires the poet’s recitation of verses in classical Urdu, still spoken in the older part of the city.

“Not one word out of place not one unnecessary thought in any line,” gushes Bajpai who says that Arif’s poetry transports him to a Lucknow he loves, and awakens different layers of Lucknow that lie asleep in his soul.

These youngsters feel very close to Arif today, as if Arif never left Lucknow. As if hijrat and migration is deception, only illusion. As if there was no going away by anyone, any where.

After all the idea of Lucknow does not leave Arif, and his poetry has made a home in Lucknow, inspiring generation next to continue writing the way connoisseurs here like their verses to be.

Born in a narrow lane in the old part of the city in 1944, Arif may no longer live in Lucknow but his demeanor and his writing remains quintessentially lakhnawi.

Reading his verses or listening to him speak evokes the flavour of a certain period in Lucknow of untold refinement and etiquette.

In 1965 when Arif left Lucknow he took with him all the wealth that he could take from here.

He took a double master’s degree from the Lucknow University. He took all the knowledge he had earned from spending long hours in the many libraries that dot the city. Whatever goodness was still left from the last phase of an oriental culture that had mesmerised the world throughout the 19th century, also went with him. He stepped into the world armed with an inimitable Lakhnavi accent, charming manners and unbelievable sophistication.

Before leaving, he also remembered to map all the lanes and by-lanes of the city of his birth upon his heart. Then he took to the road, reciting poetry as he travelled around the globe, never forgetting where he came from.

Today he is celebrated as one of the most philosophical and romantic Urdu poets in contemporary times. His very first collection of poetry in classical style but studded with modern expressions won him instant recognition three decades ago. After that he decided to do nothing else in life except write poetry. He compares his compulsion to compose verse to that of the nightingale’s obsession to sing till it drops dead.

Arif learnt to love poetry while in Lucknow. Everyone in Lucknow loves Urdu poetry. At a particular time in history the whole city was engaged in poetic pursuit. Those citizens who did not write poetry were enthusiasts. Poetry was in the air, and in the water here.

Arif does not tire of repeating that when he lived in Lucknow he had inhaled Urdu poetry with every breath.

The evenings in Lucknow had made him breathless as he listened to Bekal Utsahi recite poetry in the local dialect of Avadhi. Arif remembers walking along the River Gomti mesmerised each day by the skyline of the city metamorphosed by the sun in purple, and pink. Once in a while he would take a boat ride on the river and inspired by the breeze he would burst into song even in his unmelodious voice.

In Lucknow he was addicted to watching the sun disappear every evening behind the many domes and minarets of mosques, temples and shrines. He had waited with great anticipation for the night, darker than kohl to be illuminated, lamp by lamp.

This ritual by the rich and the poor alike took place regularly at every sunset to the sound of temple bells, bhajans, and hymns sung publicly in praise of Muhammad, the Prophet. The jingle of the ghungroo, and many a beat slapped upon the tabla were essential notes of the orchestra heard every evening in Lucknow. It still thrills him to recall the daily preparations that had taken place for a night long congregation of poets, in excitement of a rendezvous between beauty and love.

It was not unusual for people even on the street to converse with each other in rhyme.

However in the midst of this exceptional cultural ebullience, poverty had plagued Arif. In Lucknow Arif was tired of being poor so he left in search of prosperity. His dream was to teach in a university. Instead, he found employment as a broadcaster. For a while he made a career as a media person and wrote poetry when he could, frequently lamenting his separation from the city of his birth.

Professionally the migration to Pakistan did him good, but the loneliness that he suffers even today often makes him want to die.

Arif continues to write mostly about love, longing, loneliness and learning, and his fans in Lucknow want little more from him. 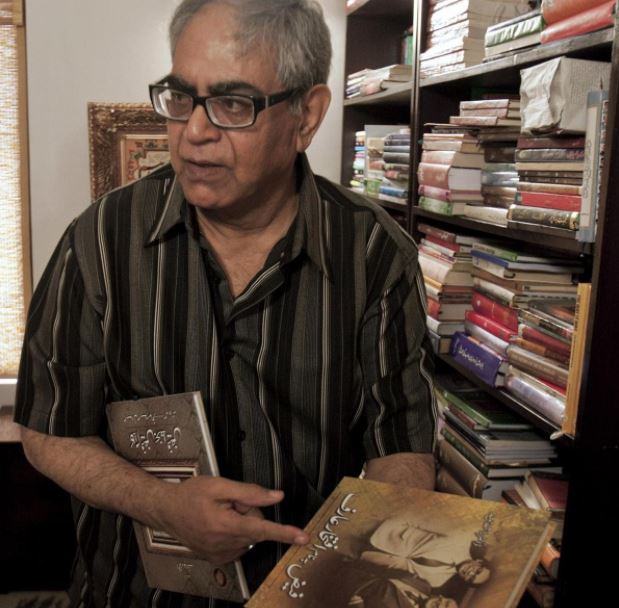 Published by Aleph Book Company, A Shadow of its Past: A Short Biography of Lucknow is Mehru Jaffer's forthcoming book