The Falcon and The Winter Soldier – Review

This is the way to do it

Marvel’s newest entry in the Captain America series is a six part TV series streaming on Disney Hotstar – and it comes with all the large scale action, laughs and heart we have come to expect from this comic book movie behemoth.

What is unexpected however, is the nuanced and essential social commentary this series provides. It does that by asking a very simple question: can a Black man ever be ‘Captain America’?

The story takes off after the events of End Game where Steve Roger’s Captain America passed the mantle to his close friend and co-Avenger, Lt Sam Wilson – brave, honourable, and among other things, Black.

At the start of The Falcon and The Winter Soldier, Sam foregoes the honour and responsibility of being Captain America. We are not quite sure why, but are led to believe that he doesn’t think anyone can fill the boots of the great Steve Rogers. Unbeknownst to Sam, in doing so, he gives up the opportunity to right a historical wrong.

The series continues with Sam teaming with Bucky Barnes’ Winter Soldier to thwart an international rebel group named the Flag smashers. What follows is a series of highly entertaining action scenes, as we have come to expect from Marvel, smeared with dollops of some of the best ‘bromance’ we have seen on screen in recent years between Bucky and Sam. Their chemistry and comic timing leave the viewer in splits in even the most intense of situations, like say psyche evaluations for these troubled heroes.

If there is one notable flaw in this series created by Malcolm Spellman and directed by Kari Scogland of The Handmaid’s Tale fame, it is its tendency to paint some things with broad strokes and fall back all too obviously on some age-old American storytelling tropes.

Take for example take the fact that Sam’s family was in the fishing boat business down south in Louisiana. Or that the newly christened government-approved Captain America, John Walker, was the most popular kid and football captain from his high school and even has a Black sidekick (yup!) named Lamar.

Fortunately, the series soon moves in a more nuanced direction starting with John Walker’s Captain America who, unlike Steve Rogers, is a flawed character who wants to do good but maybe for the wrong reasons – for glory, for power, for fame. It is heartening to see the creatives behind this project take such a complex trajectory, largely unexpected in a tentpole like Marvel series.

But the series only truly reaches its full potential with the introduction of Isaiah Bradley, an aged Black super soldier who was given the same superpowers as Steve Rogers by the American government, but kept secret simply because he was Black, and the powers that be decided America was not ready for a Black superhero.

This bitter old man’s journey is really the story’s heart and soul – it forces Sam to reconsider his decision to give up the shield when history has given him the once in a lifetime opportunity to become Captain America and finally be recognised for building the country on behalf of all Black people.

But does that mean non-Black Americans are ready for a Black Captain America? No, of course not. Yet Sam realises, as do we, that someone sooner or later will have to push the mantle, and make people face uncomfortable realities, and that moment is now. So he finally decides to don the star-spangled banner, knowing full well that a large section of the fellow Americans he is pledging to protect might hate him simply because he is Black, and became Captain America despite it.

The series is important primarily because issues like racism which are deep seated and have far reaching effects on society need to be dealt with in the mainstream, and this is the way to do it. Package it with big franchises, big stars, and unending entertainment so it reaches the masses – which the documentaries, indie films, and Palme d’Or winners simply don’t.

And to the series creators’ credit, they manage to deal with it in a nuanced manner and without resorting to any easy answers. In fact the series goes a step ahead and lays out some pretty complex and nuanced revelations of its own on the matter of the historical injustice of racism that permeates every sphere of life to this day.

It doesn’t stop there. The series also deals with its so-called villains in a heartening way. This one though is no surprise coming from Marvel, who in Thanos created one of the best fictional villains in recent memory. The main villain here, however, is no alien superpower but a twenty-year-old refugee girl, who attains super powers the same way Steve Rogers did and is now fighting for justice for her people who have been stung by oppressive world governments.

This track is a clear response to the political and moral refugee crisis faced by Western countries over the last decade or so. In the end, Karli Morgenthau, the leader of the flag smashers is presented as an empathetic, passionate if misguided character who truly believes she is on the right side.

That Sam and Bucky manage to stop the international terrorists, take on the mantle of Captain America, and charm a few ladies along the way is a foregone conclusion. But what’s refreshing and special about this series is that it also manages to push forward a social conversation which can go a long way in healing a country divided.

There are many reasons to watch The Falcon and the Winter Soldier. Witty humour, unending twists and turns, ample Marvel nostalgia, layered and extremely fun characters, powerful performances by Anthony Mackie as Sam Wilson/the Falcon, Sebastian Stan as Bucky Barnes/the Winter Soldier, and some of the most pulsating action sequences on the small screen are obviously some of them. You can add nuanced social commentary which needs to reach the masses and the children who watch this series to the list as well. Thank you Marvel. 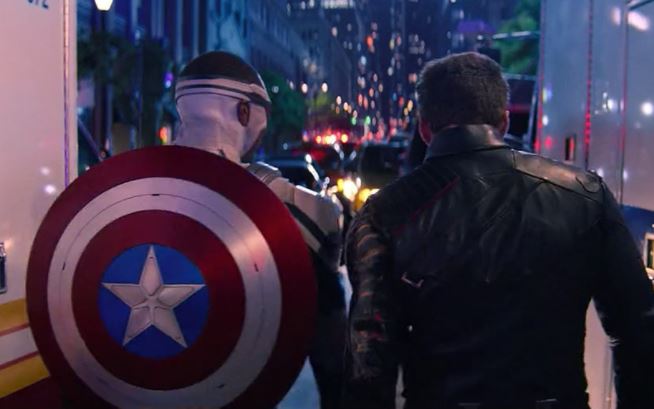