‘Theatre is a live show, cinema is not.’

In his book On Theatre, Badal Sircar, India’s most influential dramatist and playwright, wrote about the importance of communication in all art forms, especially in theatre.

He said that an artist communicates to people through his art, through literature, music, painting, or acting. But all these methods of communication differ from one another.

The Covid19 pandemic has, in a way, coerced everything, whether successfully or not, towards the online. Not just education or work, but recreation, meetings, dates and even last rites have shifted from a physical space to tiny, little boxes on a teleconferencing app.

In the midst of all of this, theatre has also been trying to create a space for itself in the online sphere. With a few leading theatre companies turning out digital theatre festivals, watching theatre live has taken a new meaning of its own.

To understand what goes behind taking a live theatre play online, who gets left behind, and is a digital play worthy of being called theatre, The Citizen spoke to a few theatre artists who are at the frontline of this scene.

Raveesh Jaiswal of the Bombay Theatre Company was about to stage his first theatre production in Mumbai in April 2020, when the pandemic hit. Being a small and new theatre house on the block, they had to think on their feet to survive.

“I thought of putting my plays on Instagram. As I thought that no one would watch an hour or more on Zoom, YouTube, I decided to use the Instagram feature of going live to do shorter plays,” Raveesh told The Citizen.

To him, going live on the app gives one a feeling of actually going live and his first couple of shows were watched by around 2,000-3,000 people. This gave him the confidence to come up with an online theatre festival called The Theatre Project, which staged 10 plays online from October to December 2020.

None of the actors was paid in the show as the company did not earn any money from Instagram themselves.

“We told all the actors upfront that we are doing a theatre live and there is no monetary involvement here because we are not doing a ticketed event. We are doing this for fun and creativity during these tough times,” he said.

When she saw the hardships people faced during the first lockdown, Dipti Mahadev, a theatre artist, was perplexed whether she would be able to get back on stage or not. Before the pandemic, she was touring the country, staging her solo act play, ‘Kabutar Ja Ja Ja’. The pandemic pitched them back financially.

Slowly, she was approached by theatre directors for online plays and the artist in her couldn’t say no.

“As a team, we were sceptical about the whole medium initially, but soon the process of discovery led by the director went on to be as enriching as any stage play I had done,” she told The Citizen.

At the end of a good performance though, she seeks the presence of her teammates. In one play, The Last Poet, that was staged online, she played five characters back to back based on audience polling.

“I had to change costumes, setups, and do my light operations in front of the audience. The most delightful part was that all the team members worked from different cities, yet we felt truly connected over our zoom rehearsals. Although, each day after the performance, after ending the zoom meeting, I would find myself sitting alone in the room with my scattered set-up, desperately seeking the physical presence of my teammates,” she said.

She declined to comment on any earning capabilities from the online medium.

Deepti Dandekar, a theatre performer runs her own YouTube channel by the name of Pramodini: Ek Kavita and is trying to make her project economically viable.

Unable to channel her creative outlets on stage, she turned to YouTube. “It is a platform where you can take your art to every corner of the world without leaving the house and create opportunities for yourself by constantly delivering good work, thoughts to society,” she told The Citizen.

Over time she realized that what people consider “entertainment” on social media is very different.

“Unfortunately, the content out there is more inclined towards obscene subjects, abusive jokes (of course, some channels are exceptions but comparatively few), so initially I gathered my audience through mouth publicity and social media. Even after presenting the poems written by the audience, I did not get a satisfying response. So, I am now doing comedy content with meaningful subjects where my acting will also be noticed,” she explained.

Currently, she is unable to make any money from the platform as she is relatively new to the medium.

Veterans who are trying to raise money through online theatre are not successful.

Samyuktha, head of programming at Ranga Shankara, run by theatre veteran Arundhati Nag in Bangalore, said they had not even thought of going online till the pandemic hit. Unsure of what to do next, they took a while to stage a big production online.

In October 2020 they organized their annual theatre festival online, a ticketed event, and the response to the program was “disappointing”.

“We honestly expected more. We touched around 1,500 people for our event which ran for about seven days, as each film was showcased for seven days. The so-called global audience too was negligible,” she told The Citizen.

Running and maintaining theatre spaces is a challenge for established theatre companies presently. Gopal Sharman, a renowned playwright and a theatre and television director, founded the Akhara theatre in 1972, with his wife, the actress Jalabala Vaidya and his daughter Anasuya Vaidya-Shetty.

Now, his daughter is trying her best to keep this place afloat.

“Finance is a big issue, it has been an extremely difficult time for us. We have sold things, taken loans, applied to grants which have not gone through yet,” she said.

They are planning to curate an original theatre program that will suit the online audience and are hoping to raise some revenue from it.

“When theatre goes online, they will not be the same as they have been for thousands of years. The essence of theatre is in the interaction of the people, which is missing online. But if you are to go online, you have to do it well,” she told The Citizen.

This way, she felt, it won’t be similar to a film nor would it remain pure theatre. “By merging two platforms, we are creating a third art form, a new medium to tell stories. It is an exciting opportunity and for now, one can work with that,” she said.

Abhijeet Choudhary, the founder of Swatantra Theatre of Pune, agrees with this point of view and goes a step further to ask what benchmark have we created for the coming generation?

“We can pick different forms of literature, like short plays for monologues, that can serve as inspiration for the people. People would remember that during the coronavirus pandemic in 2020-21, people did these stories online. We have to set an example. The next generation will ask what you did during this time, did you only do plays that you did on stage,” he asked.

The only source of income for his theatre company for the past one and half years has been theatre workshops, that are sufficient for the survival of the core two to three people. The rest, light and stage workers, have opted for different means of livelihood.

“There are technical glitches during the workshops. Here, the human, interpersonal relationships are missing. However, there have been some advantages as well. While doing theatre online the entire household becomes part of the play. We can focus on things beyond acting, for example, mask making, makeup, lighting, etc,” she said.

To sustain himself during the pandemic, Vijay Srivastava, a theatre director based out of Delhi was also advised to take online workshops.

Vijay laughs that he would have to take classes himself first in order to teach theatre online.

“It is the same to say that we do an interview in signs, rather than words. It is not possible. Maybe, we would be able to communicate better. But we would be changing the language. In online, the camera has an altogether different language, we would have to learn that. If someone has to learn that, there are many experts on films, other than us,” he told The Citizen.

Vijay complains that during the pandemic no government body or person spoke about art or culture. “We were the first ones to be shut and the last ones to be opened,” he said.

Even if the online plays are made to be successful, Vijay added, we will encourage a social hierarchy.

“In Delhi, you can think about it. What will happen in smaller towns?” he asked.

For the past one and half years, his company has not received an offer to stage a street play.

“Post Corona, the first condition is that you cannot assemble people in groups. And for us, our first condition is that people should be present. The situation is very bad. Many people from my group are running rickshaws, working in shops or selling vegetables. What can the government do also, for them their first priority is Corona,” he told The Citizen.

Speaking about taking theatre online in smaller towns, Yoby said it is not possible for smaller towns as they lack resources and technology.

The truth is, Yoby said, artists are not required to run a country.

“If tomorrow, doctors or nurses, police, workers or even vegetable sellers stop working, the country will be affected. As artists, we have not held up our duty towards society. So, society also has not given us anything back. If your cable connection had gone during the lockdown, everyone would have panicked. We did not become a need for society. We are also to be blamed,” he said. 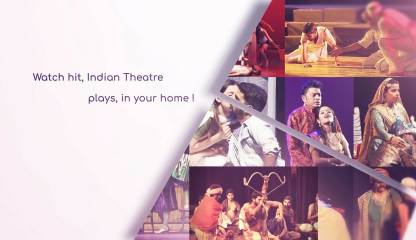