NEW DELHI: “ABVP go back”, “dilli police sharam karo”, “gundagardi nahi chalegi” slogans rent the air as thousands marched in Delhi Univeristy against the ABVP and its mentors. Students walked singing songs, and shouting slogans to protest against the attack by the ABVP cadres and the Delhi police on peaceful students, demanding justice and upholding the right to dissent.

The entire road was tightly packed with police everywhere ready to take action. After the march ended the students settled down and people from different organizations, political parties and students from various colleges came forward to express their support.

Delhi University Teachers Association’s president Nandita Narain said, “this is not the first attack on our students and on us. Earlier these ABVP physically assaulted a teacher of SRCC University and all the teachers of SRCC went to police station to file a complaint but police did nothing. Then once we were having a peaceful march for some reason and they filed a false complaint against us that we were making ‘Pakistan Zindabad’ slogans. These students are not worse but the politicians like Arun Jaitely and Rijju who are provoking them are.”

Yogendra Yadav, former member of Aam Adami Party was also present and said, “The mobility we are seeing here against the injustice is appreciative. You people should be proud of yourselves as the people who never respected the national flag, in the march that happened yesterday (referring to the ABVP march in the campus day before) were raising our national flag. We need to tell them that if they want to spread this fascism then they should go to Germany or now days even America.”

He further added, “This is a similar situation which Indira Gandhi created before imposing the emergency in 1975 and at that time like how this country retaliated we have to do this again. We are not afraid of them and they should know this.”

Many students from Ramjas College were also there who spoke about their experience on that fateful day. They said, “Teachers were hit, girls were given rape threats and stones were pelted and all this happened in front of Delhi Police which did nothing. We have to stand up against these goons but in a non – violent manner which is the biggest weapon we have.”

Many students from various colleges spoke their minds and declared that “we don’t need to learn nationalism from these goons. They want to spread Hindutva but our ancestors like Bhagat Singh, Gandhi or Bose have taught us patriotism.” Students referred the killing of an Indian in America recently and said that in India everyone criticized it even the politicians, but no one should speak of Najeeb or Rohith, that cannot be criticised.

Gurmehar Kaur, (Kargil martyr’s daughter) who took a stand against ABVP and was threatened with rape was also applauded here by many who all said that more support was needed for her.

There were many Politicians from the Janata Dal(U) and CPI(M) who also supported the students against the barbaric attack to suppress their democratic rights.

After the protest ended a student named Utkarsh, while going back was beaten up by a member of ABVP named Prashant Mishra. He was arrested by the police present there and an FIR has been lodged against him.

During the protest it was announced that on 4th of March, there is going to be another protest march from Mandi House to parliament in which more number of students are requested to participate. Looking at the number of students who participated in today’s march this agitation is going to be large day by day until some solution is found and their demands are accepted. 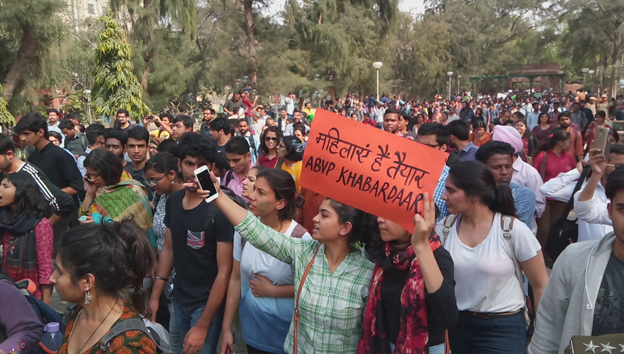 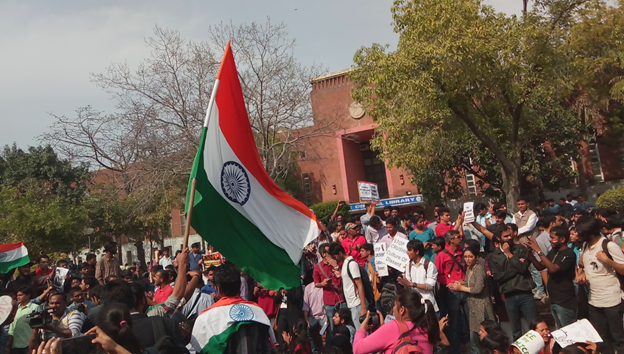