Why The U.P. Exit Poll Predictions Are Meaningless

NEW DELHI: Opinion polls and exit polls make for front page news and hours of live TV coverage, with analysts and viewers alike placing a huge amount of faith in these numbers that aim to predict election results. Two days ahead of the Uttar Pradesh assembly election results, all eyes are on the exit polls that have been delayed to March 9 on orders of the Election Commission. Exit polls for Goa, Manipur, Punjab, Uttarakhand and Uttar Pradesh are all expected March 9 following the EC order. The question, however, is -- should opinion and exit polls even count as news?

In a famous case gone wrong, Outlook magazine in 2004 ran a bold cover story headline based on an opinion poll, declaring that “NDA leads with 276.” The NDA, as we all know, went to lose that election, with the Congress coming to power. Outlook vowed never to use opinion polls to predict elections ever again, and although the publication has stuck to that decision, the business of opinion polls has continued to surge in popularity. TV channels, especially, insist on relying on opinion and exit polls.

While Delhi, Bihar and Tamil Nadu are recent examples, opinion and exit polls are largely inaccurate and have been so forever. In fact, “of the 82 electoral surveys that surveyed more than 1.25 million voters for 13 Lok Sabha and State Assembly elections since 1996 that we analysed, zero (yes, zero) have been fully accurate and 15 have been partially accurate,” as pointed out by Praveen Chakravarthy. “We define “fully accurate” as being within a +/-5 per cent range in terms of seats predicted vis-à-vis actual results for both the winner and the runner-up. The 5 per cent test is a fairly standard statistical norm to determine if a certain outcome is purely by chance or by design. We classify partial accuracy as those that predicted either the winner or the runner-up but not both, within the range of 5 per cent. If we relax the +/-5 per cent accuracy levels to 10 per cent, then 9 out of 82 surveys have been fully accurate and 27, partially accurate.”

Further, “accuracy levels of these surveys show no signs of an improving trend since 1996 though sample sizes and number of surveys have increased substantially. Similarly, there is no evidence of these surveys being able to predict a State Assembly election better than a Lok Sabha election or vice-versa. Neither is there proof of any specific survey organisation(s) getting their predictions consistently right vis-à-vis others. Accuracy levels of these poll surveys are understandably as random as electoral outcomes. Thus, at best, one in three poll surveys over the last two decades have been partially accurate and at worst, zero has been fully accurate.” 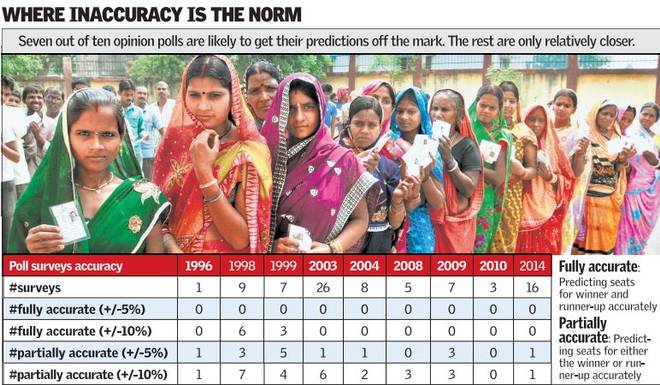 Of course, being inaccurate hasn’t impacted the business of opinion and exit polls, which is booming. While exit polls employ some sort of vague methodology (most pollsters haven’t revealed their exact research methodology), analysts in the business of predicting election results have even less credibility. News pages have been dominated by self-processed political pundits giving their predictions of the upcoming elections, down to the last seat. Astrologers too are often referred to when it comes to election results.

This is not to say that exit and opinion polls, political analysts and astrologers will invariably be wrong. Instead, let’s just say Paul The Octopus has a far, far more accurate record in predicting football games than any of the above pollsters or analysts have in predicting election results. Yet, the cephalopod’s predictions didn’t make for hours and hours of live TV coverage and analysis.