Why Did Mulayam Singh Whisper Into PM Modi's Ear?

LUCKNOW: A Photograph speaks a 1000 words and this cover picture here, clicked by almost all photographers present at the oath taking ceremony of Yogi Adityanath as Chief Minister of Uttar Pradesh has sent Lucknow abuzz. Everyone has his or her own version of the intimate gesture, with Samajwadi party chief Mulayam Singh holding Prime Minister Narendra Modi’s hands as he leans over to whisper in his ear, while Akhilesh Yadav looks on.

The political wags insist that the SP chief was asking PM Modi to look after Akhilesh. “Akhilesh ka khyal rakhiye ga” is one version that has found its way into English dailies as well citing BJP “sources.” Others are equally categorical that the whisper was an assurance, “I am with you” to the PM. A third rumour making its way through the political corridors has Mulayam Singh telling the PM that he should “teach Akhilesh politics” although this seems to be far fetched even to the narrators.

The whispered words in this case are not important, and as SP leaders put it, the gesture itself with the country watching was eloquent and said it all. An old party socialist said, that the hands linked together, the quiet connect, was a clear message to the party and the state that the Samajwadi party’s now fading war horse was reaching out to the BJP and its top leadership. And that was keen on establishing, and projecting, an intimacy that should be read by all that he was a ‘friend’ of PM Modi, and hence should not be targeted by the new dispensation in the state.

Mulayam Singh was clearly at the swearing in of Adityanath for a ‘charm offensive’. Bahujan Samaj party chief Mayawati had decided not to attend as had many others in the opposition. Hence the presence of both father and son together on the dais created considerable interest, particularly as first Mulayam Singh insisted Akhilesh greet and shake hands with the Prime Minister. While a visibly reticent Akhilesh moved forward to do his fathers bidding, Mulayam Singh closely watched PM Modi for his response. 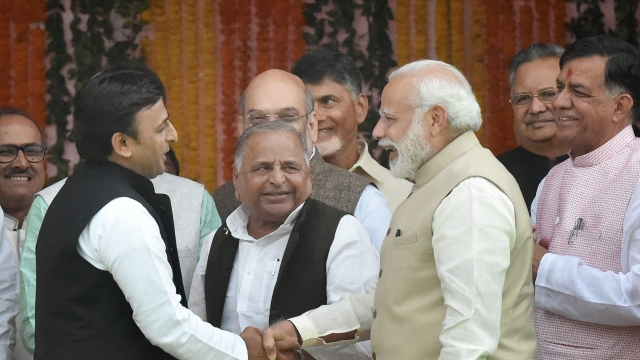 Cleary the intention of this little exercise that had the light bulbs exploding was to bury ill feelings of the campaign, and thereby buy the space to survive without being targeted by Adityanath and others in his party. Mulayam Singh is currently a favourite opposition leader with a section of the local BJP members, as he is seen to have worked hard against Akhilesh Yadav during the campaign for the just concluded Assembly elections. Akhilesh Yadav who had quietly sidelined his father and uncle Shivpal Yadav to gain control of the Samajwadi party was also shown by Mulayam Singh as being back under his control after the defeat at the hustings. Akhilesh Yadav quietly followed his fathers bidding, and did as he was told, again in full public view. A statement that made it clear to the onlookers that Mulayam Singh was back at the helm of affairs.

The smile on Mulayam Singhs face at the function replaced the scowl he had been carrying for several months now, and was noticed by his cronies and opponents alike. He had worked actively against Akhilesh Yadav by one, criticising him through out the campaign; two, not campaigning for the Samajwadi candidates except a few of his own’ and three, campaigning for Ajit Singh’s candidates and not the SP’s in a couple of constituencies in western UP. His brother Shivpal Yadav, according to sources in the party, had worked harder in the areas he had support to convince people not to vote for the SP.

The defeat of the Alliance brings Mulayam Singh back into the driving seat, with Akhilesh Yadav sliding back into his ‘yes Netaji’ role as he tries to cope with the new politics that has driven him from the government where he started his career, into the Opposition. The shell shocked Samajwadi party has still to take stock, with many who had supported the young former CM now turning against him.