NEW DELHI: For the past few months, I have repeatedly come across a video posted by BJP supporters on social media in which a young girl is beaten up by a mob and then set to fire. The text with this speaks of a Marwadi girl, married to a Muslim guy in Andhra Pradesh, being beaten and burnt because she refused to wear a Burkha.

The following piece of text accompanies almost every instance of the video that is posted either on Facebook or WhatsApp.

A screenshot of one such instance of the video can be seen below: 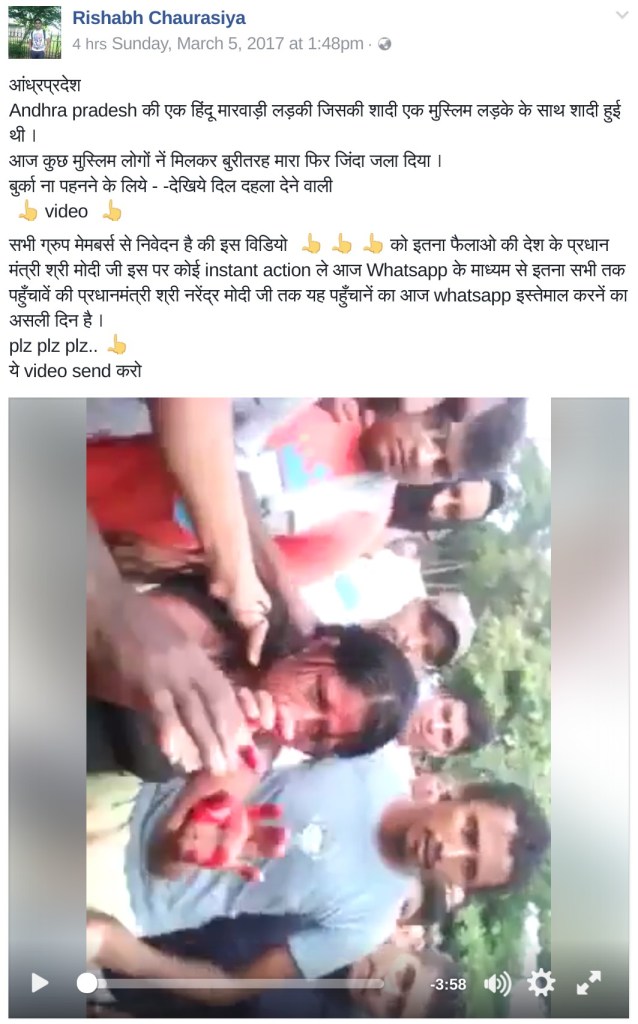 An approximate English translation of the Hindi text would be as follows:

A Hindu Marwardi girl Andhra Pradesh was married to a Muslim guy.

Today, a few people belonging to the Muslim community beat her up and then burnt her alive.

Because she refused to wear the Burkha – Please watch this heart-cuddling video.

All group members are requested that this video should be shared so extensively via WhatsApp that the video reaches Prime Minister Shri Narendra Modi so that he can take some instant action regarding this issue and today’s the day when WhatsApp needs to be used effectively for this purpose.

Do send this video

The below collage shows a sampling of these posts. 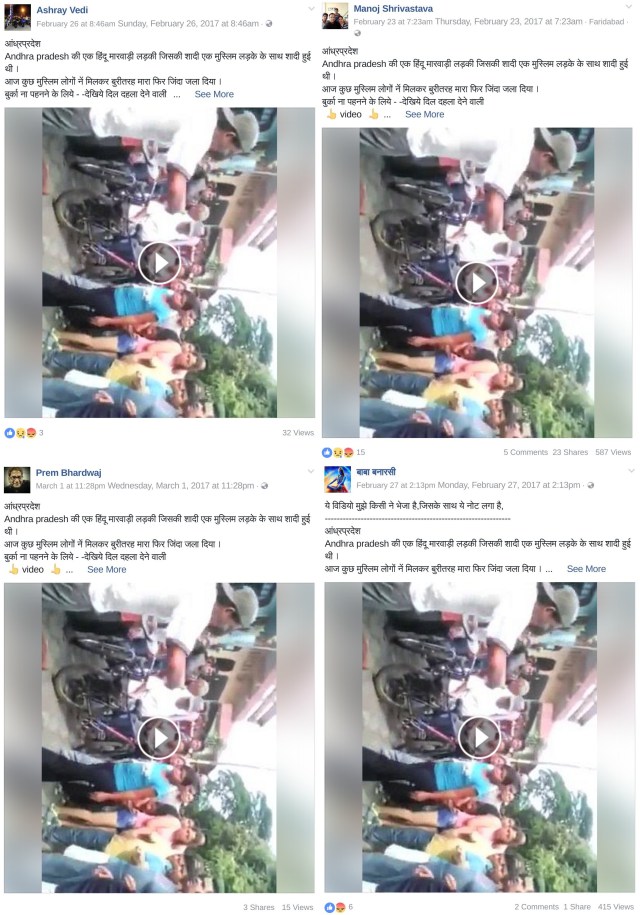 So, what’s the truth? The truth is that this video is from Guetemala and is that of a girl who’s accused of having murdered a Taxi Driver along with two other guys. She is being beaten up and burnt alive by a lynch mob while the the two other guys managed to escape. This was covered extensively in international media in May 2015 when the incident occured. 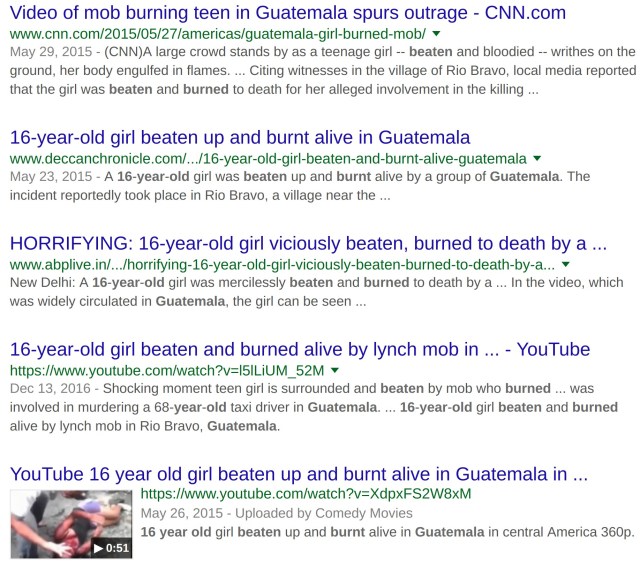 You can click on the following Google Search link to view the news articles which covered this issue in May 2015 and the youtube links to the video. I should warn you that the video is extremely barbaric and difficult to stomach, so avoid seeing the video if you can.””

Indian media outlets also covered this issue. The following is a snapshot from the website of Daily Bhaskar. 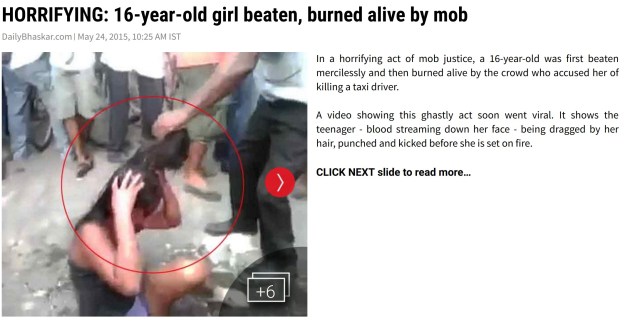 So, that’s that. A fake video to invoke extreme hatred is being shared exensively by the Bhakt ecosystem. But how effective is it? To guage that, I tried backtracking in order to find the earliest instance of this video. The one that I found was posted by a page with called ‘?????? ?????? (Facebook Media)’ with a username @HinduRashtraSena on February 22nd, 2016. 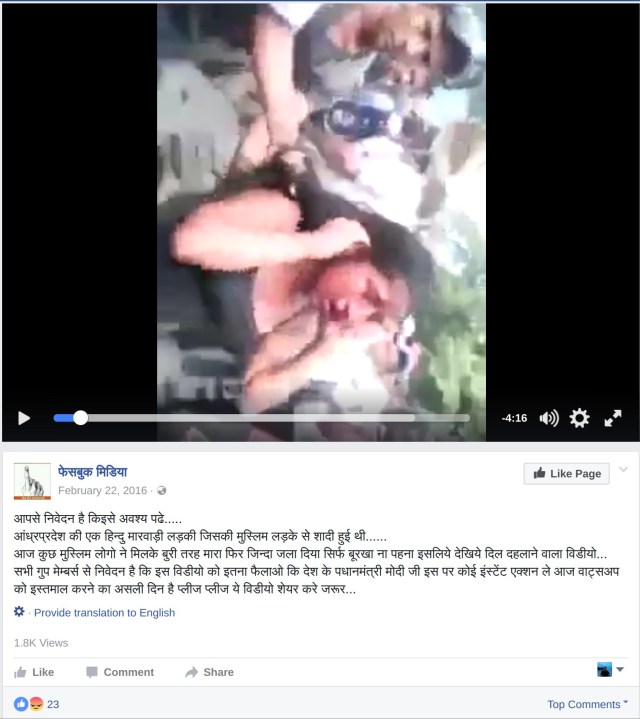 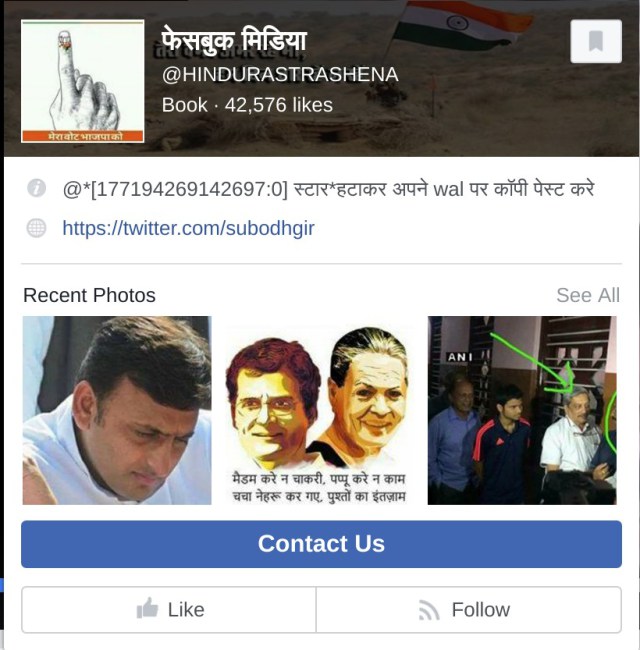 This factoid would suggest that this video has been viral on social media for over a year now and it continues to be viral. This video with an identical piece of text has been circulated tens of thousands of times and has reached the WhatsApp account of lakhs of people.

There’s so much hatred against Muslims within BJP supporters that a video which screams fake is accepted as truth and shared so many times. All a person sitting in BJP IT cell has to do is say “Muslim attacked Hindu” and post any video and it goes viral. That is how even the Muzaffarnagar riots were partly triggered. 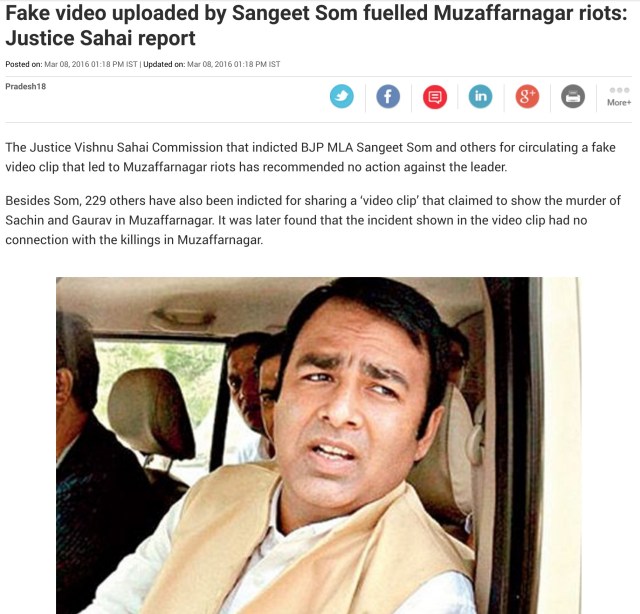 (The Citizen commends PRATIK SINHA for this extensive work to try and scotch the rumours and warn Indian citizens of this dangerous use of the social media. We request all readers to share this article, video and research by the young writer widely)