NEW DELHI: The African missions, after several days of discussions with each other and more importantly with officials in the Ministry of External Affairs, have issued a strong statement accusing the Indian government of not sufficiently condemning the xenophobic and racial attacks against African students.

In a statement issued by the office of the Dean of the African Group of Missions here. after a special meeting, the African missions said that they expected the strongest condemnation from the government of India at both the central and state levels, as well as expediting of the legal cases against the perpetrators.

The missions made it clear that they would be taking further action on this that will include a call to the Human Rights Bodies and an independent investigation by the Human Rights Council.The issue would also be reported comprehensively by the embassies here to the African Union Commission. 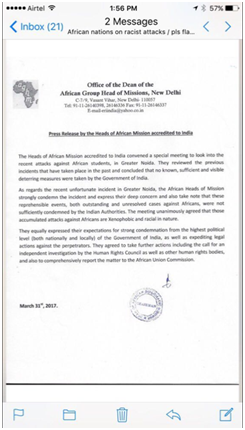 The attack on Nigerian students by a mob has triggered off a virtual face off between the African missions and the Ministry of External Affairs, after several attempts by the former for a strong condemnation by the Indian government failed. The government has continued to insist that the attack on the Nigerians ---being provoked by rumours that they were cannibals---was an aberration, whereas according to the diplomatic community it follows a pattern of continued attacks and harassment of Indian students here.

The African nations, have through their missions here in New Delhi, been urging action at different levels to ensure the security of the African students living and studying in different parts of India. In fact, many threatened to boycott the special Africa Day events organised by the Modi governments in 2016, but were persuaded to do so with assurances of action and justice. As the diplomats here have been saying, the situation has instead gone from bad to worse with the recent attack on the Nigerian students far more intense and vicious in nature.

The Nigerian government summoned the Indian envoy to register protest, but New Delhi has continued to maintain that the incident was not racist in nature. This is clearly unacceptable to the African missions here, that see in the attacks a racist, and s they have now added, a xenophobic pattern. And are approaching the Human Rights bodies for full investigation, that now brings India the scanner on racial abuse as well.

Listing law and order steps taken to enquire into the attack on the Nigerian students, MEA has again stated that in its view, “strong Indian institutions are adequate to deal with aberrations that represent act of a few criminals.” The statement, issued after the African missions letter, again seeks to emphasise that this is not a racist attack, and that a police level enquiry and action has been initiated.

The attacks on the African students have increased over the past two years, with relations between India and Africa with no exception as the joint statement now reflects, reaching a new low on this issue. Clearly the African countries have come together and the statement suggests that India will now be brought under the scanner of international enquiries for racism and zxenophobia. That the expectation of a section of the establishment that the Africans will not push the issue given their economic ties with India, has clearly not born fruit, with racism a factor that the missions here now no longer prepared to ignore.

African students have complained repeatedly of harassment on the streets, of being driven out of homes, of not getting places to rent, and continuous taunts, apart from the incidents of violence that have taken lives, injured many, and left them terrorised and insecure. Several students said that they are terrified now of living in India, and would “never” return.

This is a major shift from the years when India was a preferred destination for the African students, with India reaching out as part of its anti-aoartheid policy, to encourage this. In just a few years relations have deteriorated to a point where the African countries have come together against India, that is now being seen as racist not just on the streets, but in the insistence of the government to describe the violence as just as an “aberration” and not part of a pattern that needs to be addressed immediately.