"Black" India Hits Out At Tarun Vijay: Anger Rises In the South

NEW DELHI: “If we were racist, why would we have all the entire South (India) which is… you know Tamil Nadu, you know Karnataka and Andhra… why do we live with them? We have black people all around us.”

This racist comment by former BJP MP Tarun Vijay who happens to be the President of the India-Africa Parliamentary Friendship Group has kicked up a storm with the social media leading the charge. He tried to apologise for the comments made during a discussion on Al Jazeera television, but from all accounts the damage has been done.

DMK’ s MP Kanimozhi called it an “anti-national statement”. She added, “.I hope that BJP takes strict action against him.”

DMK MP and spokesperson TKS Elangovan said, “Racism is not in colour, Racism is in culture. This is funny that people living in Tamil Nadu or Kerala are black. He has chosen a wrong word to define South Indians". He added that Vijay’s comments reflected the divide between south and north India.

Congress leader Mallikarjun Kharge told ANI, "I condemn such statements. This is the reason we have been maintaining that it is the tendency and philosophy of the BJP leaders that they even discriminate between Indians. They create hurdles in our bilateral relations with those countries with which we want to have cordial relations."

The social media of course took the lead:

Thank you Sri Tarun Vijay. Us South Indians are proud to be black. Also, much thanks for your compassion.

The responses hit out at Vijay for not just the colour comments but also on what many from the South Indian states felt was indicative of a patron-client relationship between the north and the south: 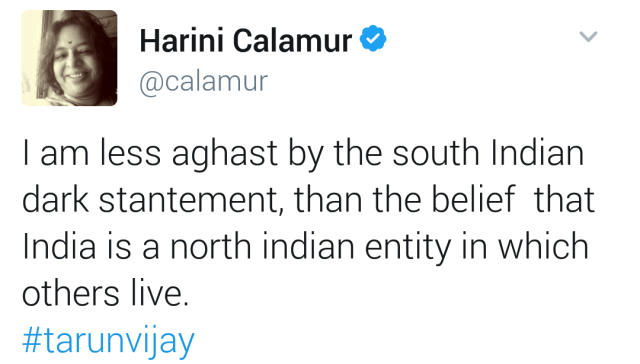 Vijay took to Twitter to retract and apologise but no one was in a mood to accept the ‘second thought’. What is the point of an apology after letting the cat out of the bag, was the consensus. And the progress that the BJP was trying to make in the South has been checked by this one remark, that has renwed fears of north Hindi -belt hegemony. More so as Vijay is not an insignificant member of the party, and projects himself as an ideologue. He was the editor of the RSS mouthpiece Organiser for several years as well.

The reactions were strong and are still pouring in thick and fast. A comment from one Roby Mani who works at State Bank of India said, “you should leave India, the black people from south India are the original inhabitants. ”

“Tarun Vijayji, please, leave india and go and live in some country where only fair live, as the black people from the South are the true orginal inhavbitants of the country all you fair and handsome/pretty persons you claim yourself to be are outsiders who have come and forcefully inhabited this land of urs. It is we the blacks who are doing you a favour by letting you live peacefully in this land of ours,and you are not in any way favouring us by living amongst us.

It is a real pity that jokers like these are being selected as MP by the illiterate people of the North whose values and aspirations are low This man is fit for doing only some manual work rather than offering his comments in international forums and disgracing the nation as a whole”.

Vijay’s comment basically feeds into the wider perception of ‘racism’ with Indians being colour conscious, discriminatory, and as the advertisements and matrimonial columns show on a daily basis obsessed with being ‘fair.’ The South has felt this discrimination and the remarks have generated deep anger , besides feeding into the long held suspicion and resentment of North Indian hegemonic aspirations.

Tarun Vijay had been trying, as per the official agenda, to popularise Tamil in the North and is set to be a speaker at an international conference for World Peace in Nagarcoil, Tamil Nadu next month. Given the controversy he can prepare himself for an adverse local response during the visit.

Vijay’s comments feed into widespread coverage of the attack on the Nigerian students, accused by a mob of cannibalising an Indian who had gone missing. New Delhi’s refusal to accept the violence that has indeed shocked the world as racist, has led to a sharp deterioration in relations with African nations. Their missions here put out a statement accusing India of being xenophobic and racist. More so as the assaults on African students have increased, with all who came to India to study, now living in insecurity, with almost daily harassment as many told The Citizen. The African countries have, in the statement, made it clear that they would be approaching international human rights bodies on this issue.