NEW DELHI: Police barricades outline an area where the consciousness of democracy thrives as a collective of protesting voices. Jantar Mantar is sometimes referred to as Delhi’s Hyde Park; the unofficial, but somehow ‘designated’ place of protest in the city. In this short street, surrounded by security forces carrying out state surveillance as much as state security, the country’s dwindling democratic spirit seems to remain alive. 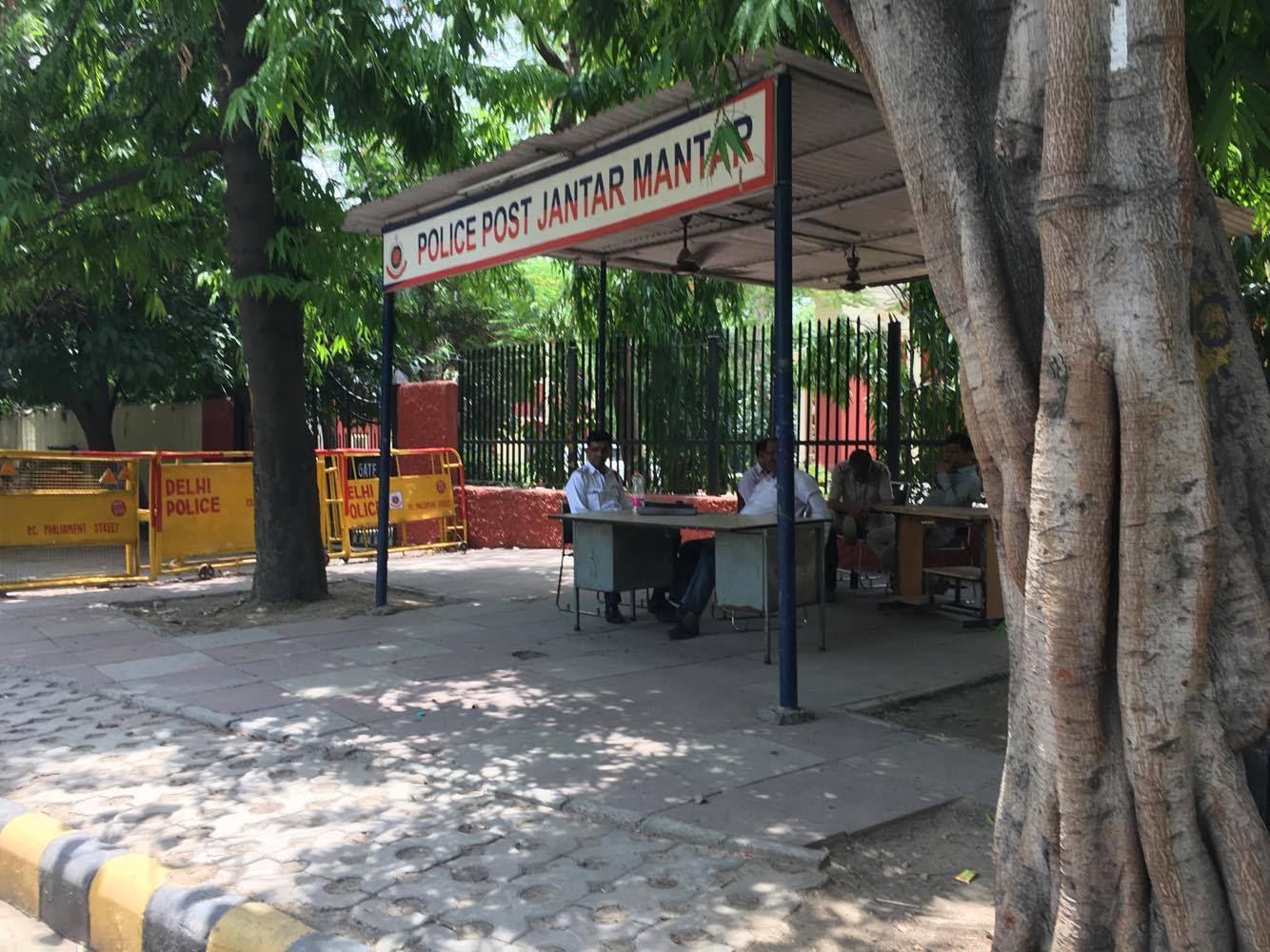 Police stationed outside the barricaded entrance

It is a relatively quiet day at Jantar Mantar. Two days have passed since Chandrashekhar from the Bhim Sena adressed a throng of Dalit supporters who protested here against the recent communal clashes in Saharanpur. This day however, the loudest noise are protest chants blaring from a loudspeaker at the other end of the street. While attempting to locate the source of the chanting, a man holding a ‘Pakistan Murdabad’ placard immediately catches our attention.

“I have studied Islam at a madrassa. I know what is about, and it is not about violence. It has never been!”, says Abdul Gafoor Toofani, sitting alone and at a distance from a swarm of protestors to his left. Abdul removes his narrow black sunglasses as he hands over a photocopy of the letter that he had written to the Prime Minister on May 11, 2017, outlining his vision for curbing Pakistan sponsored terrorism in Kashmir, and voicing his absolute loyalty to the Indian Government. Abdul has come from his hometown in Bihar and has been protesting at the same spot in Delhi’s blistering heat since May 4, in order to challenge the conception that terrorism is inherently linked to Islam. “You will have to help me raise my voice further”, he says, as we take our leave to walk further down the road. 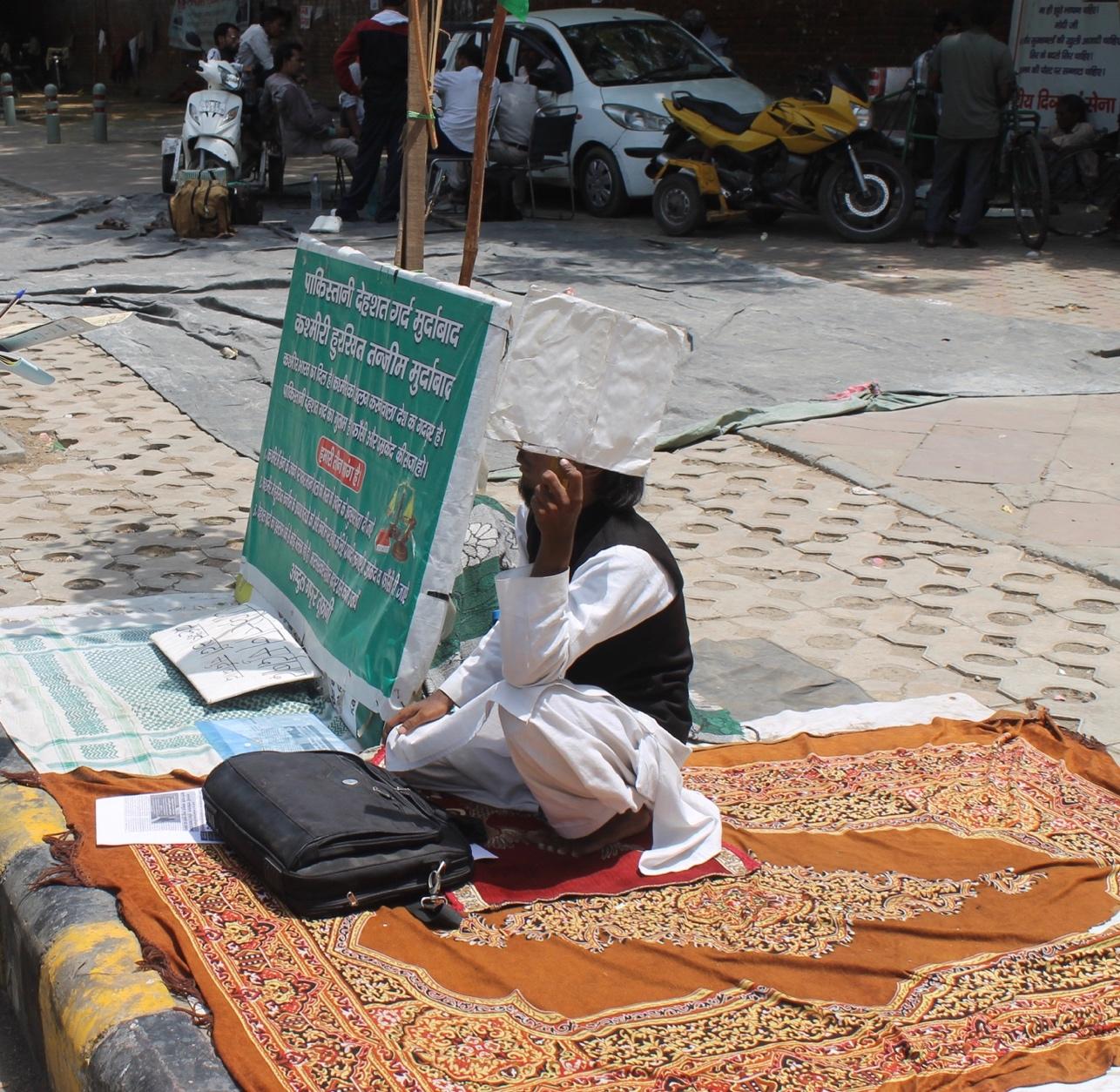 The protestors range from individuals sitting alone on small carpets, mercilessly exposed to the sun, to large groups huddled under giant banners, spilling out of compartmentalised tents that serve water and refreshments. Two young men walk by with a bucket full of water and stacks of plastic glasses. Water spills over as they rock the heavy bucket with their long energetic strides, punctuated by sudden pauses made to offer water. The supply appears to come from a huge water tank placed outside the biggest company of protestors present that day. Women are huddled on one side, while men are congregated to their left and even across the street. Children innocuously cut through this binary as they chase each other, wielding protest flags taller than their own height. 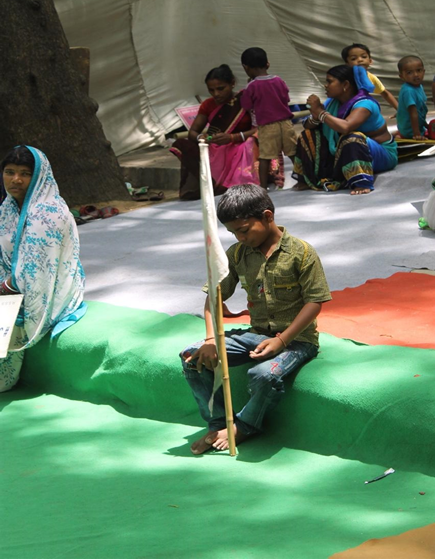 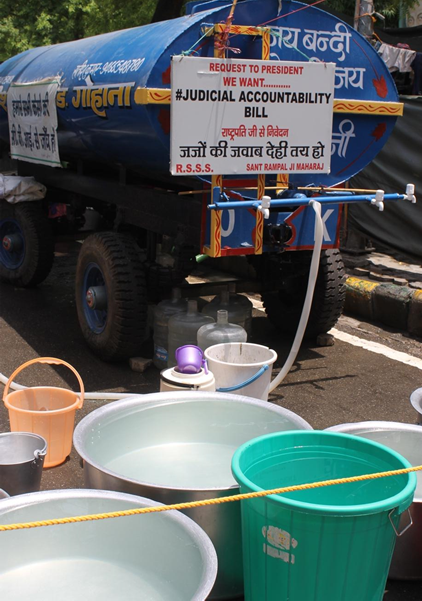 These are the followers of god-man Sant Rampal, alleging that the the court cases against their Sant are fake, and that a CBI investigation should be conducted immediately to verify the same. “We have been coming here for 615 days and no response has come from the government.” says Guddi, a follower from Rewari, Haryana. 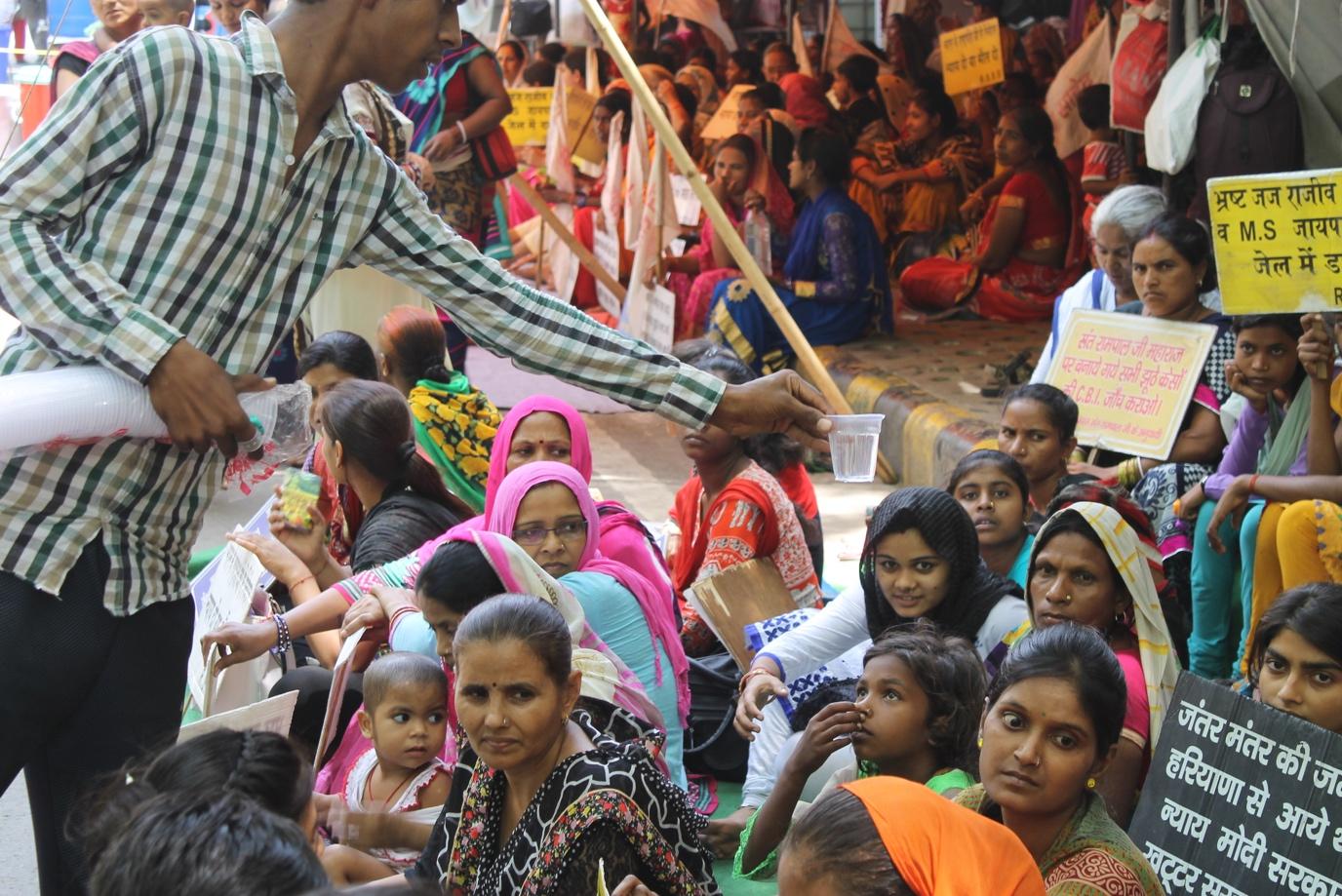 A man approaches us, giving us a pamphlet from a bundle of other such pamphlets. “You should read this. This is what our god (read Sant Rampal) has done. He cures everything. There are people who have come with throat cancer and even lung cancer. He cured them all.” I thank him for the pamphlet as he insists that we come over to the tent to buy a book on Sant Rampal’s philosophy and help ourselves to some refreshments. I assure him that we will come back in a while. As for refreshments, we spot an ingenious attempt at capitalising on the idea of mass mobilisation on a bright red food truck called Jan Aahaar (people’s food). 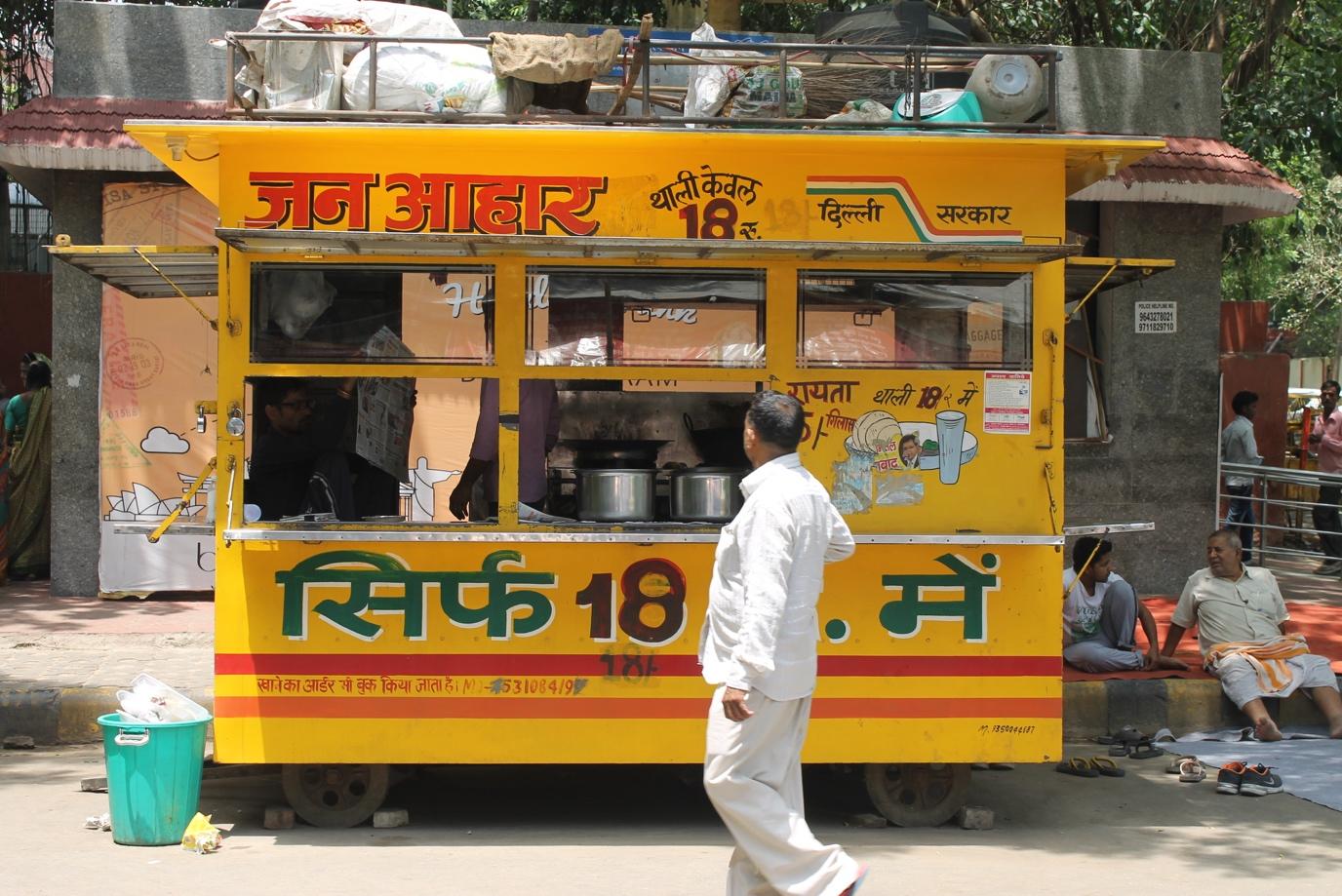 As we near the end of the row of protestors, a woman with impassive eyes hands us a news clipping. “Scan it if you need to. It is about my brother. His daughters and wife have been kidnapped and missing since 2012. Come and take his interview.” She turns away without waiting for an answer. Bewildered, we follow her to a man sitting next to an unused police post, behind which garbage accumulates. 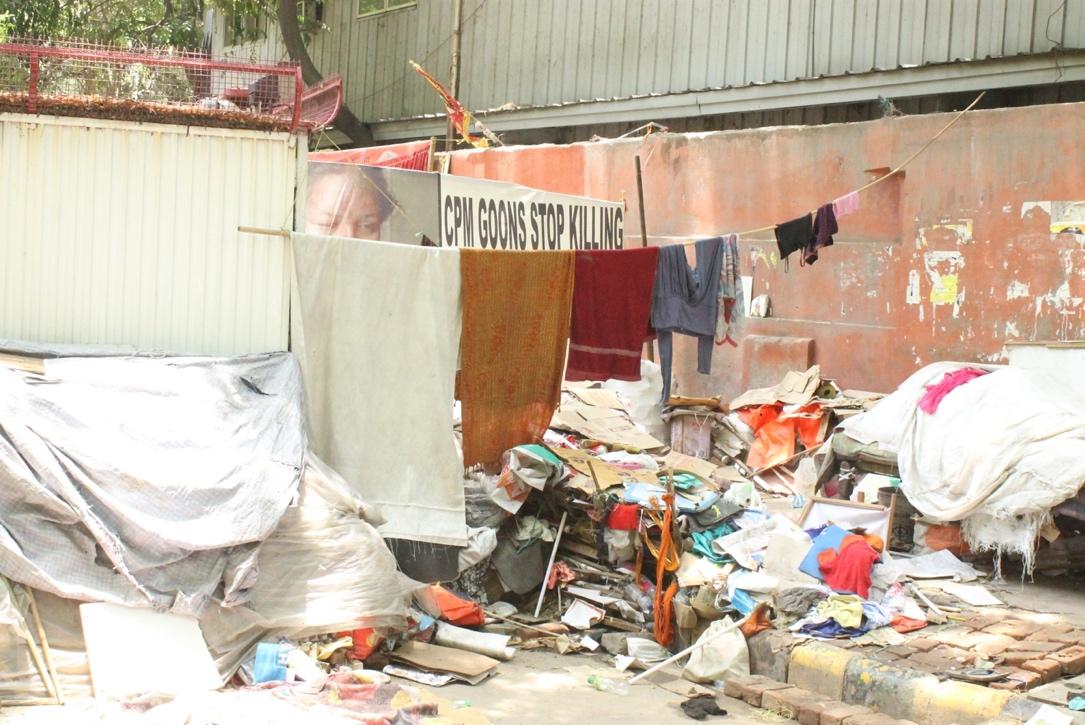 SK Pandit sports a bandaged arm. “That is not the only thing they attempted to break. Can you see my broken teeth? The goons who took away my family did this. The police refuse to file an FIR. I have been protesting here since 2012.”, he claims. I ask him how he earns his livelihood if he comes here regularly. The sister interjects: “I dry pieces of card board and sell them for a living.” Pointing at the dump behind the police post, she says: “We have been living here. There is no place else to go.” 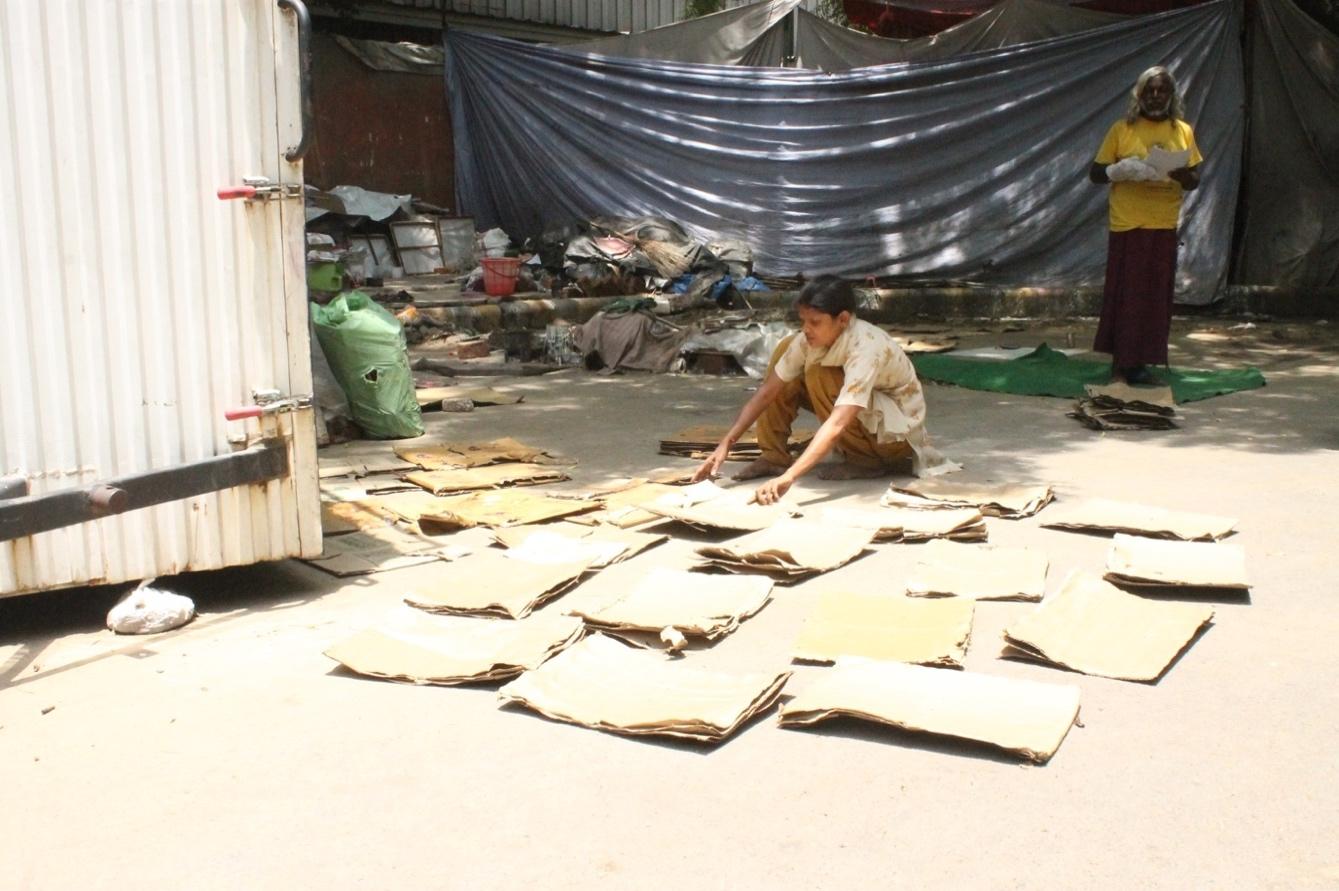 Indeed, there is nowhere else to go. Another row of police barricades marks the end of the street. This is where free speech ends. Rows of men in green camouflage uniforms watch us wearily from their plastic chairs. The state seems to have successfully contained the voices of protest. But for all those who are losing faith in the spirit of democracy, the voices of collective dissent congregate on this street. One need only make the effort to listen.