BJP And Its Spokespersons: Aggressively 'Fake'

NEW DELHI: It has become a huge event on the social media, with the trolls silenced by the abundance of jokes and laughs on Facebook and Twitter as the BJP infamous for generating fake news and morphed videos, finds its spokespersons falling prey to the same. But this has not stopped the spread of fake news by the BJP and its affiliates that continues to create mayhem across India over and over again.

This time Sambit Patra, of NDTV fame, rushed to continue his attack on the television channels with a re-tweet and a comment “Hmmm...agenda” along with a supposed story by ‘The Times of Islamabad’ website that quoted NDTV to support its criticism of Prime Minister Narendra Modi’s Make in India programme.NDTV issued an immediate denial, and clearly the story cited by Patra is fake. 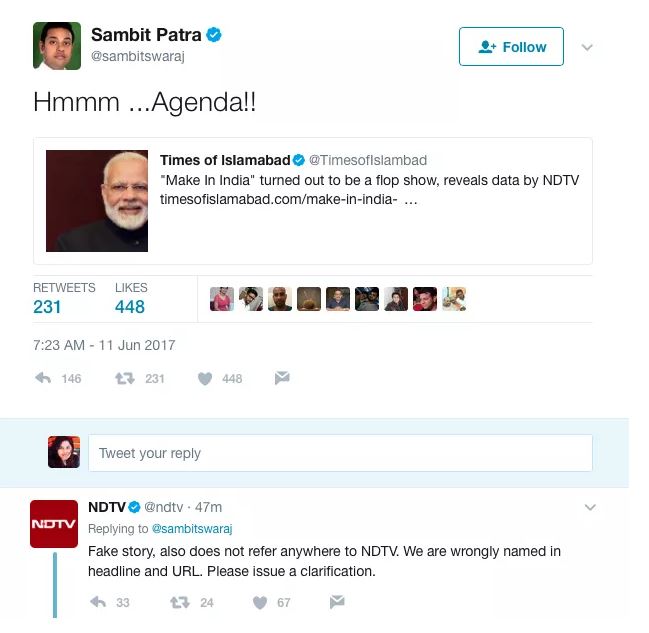 BJP leaders have been using fake video and stories to generate divisiveness. The first incident noted, and exposed by independent media and fact finding teams of eminent citizens at the time, was of a morphed video used by the party legislator Sangeet Singh So, This followed the aggressive mahapanchayats and the video showed a mob of Muslims beating up a man, that the video circulators here insisted was of the majority community, thereby inciting retaliation. The video, as was found out, was from Pakistan of a Muslim mob attacking a Muslim at some unspecified date in time.

The second major incident with a huge impact was of the morphed videos, shown this time by mainstream television channels, of Jawaharal Nehru University students allegedly shouting anti-India slogans. This led to the arrests of young students many of whom were jailed on the charge of sedition, and the deployment of police across the campus.

The fake news industry continues to thrive with BJP leaders using false images to propagate false news, and incite passions. Unlike Patra’s mistaken dissemination, this fake news is calculated and not as easily countered.

Krishanu Mitra, former spokesperson of BJP’s Bengal State Unit, posted a video on his Twitter and Facebook timeline in which he states, “Those criticizing the Indian Army and Maj. Nitin Gogoi should see how other sovereign powers deals with secessionists. The following video is an insight into how the Chinese army deals with stone-peltors“. Following is the video of his Facebook post.

The same video has also been uploaded to Youtube multiple times with a similar description. 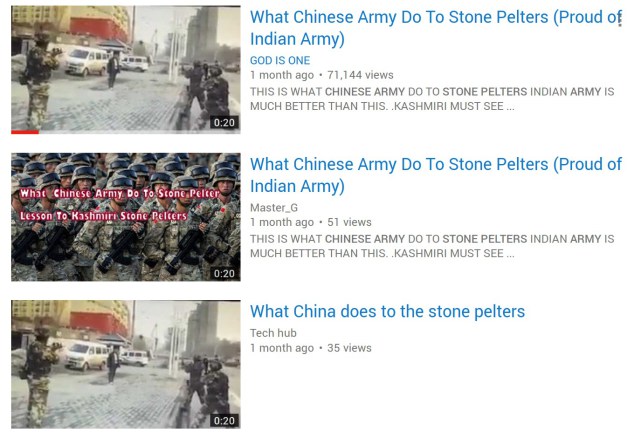 This video of the Chinese Armed Forces shooting a man has been making the rounds of various right-wing Facebook pages ever since the incident in Kashmir where a civilian was tied to the bonnet of a jeep and was paraded around as a human shield across several villages for many hours. Army Major Leetul Gogoi who reportedly took this decision claims that he was forced to do so to escape an angry stone pelting mob.

However, the man who was shot down by the Chinese Armed Forces wasn’t a stone pelter. In fact, he was armed with an axe and a knife. This video first surfaced on the Internet around January 13, 2016 and one of the first websites to report this incident was Tomonews. A higher resolution version of the video that was posted on YouTube on Jan 15, 2016, shows how the armed personnel first asked the man to surrender and a warning shot was fired in the air. At this point time, the man initially pretends to surrender by dropping the knife in his left hand (8 seconds into the video). However, seconds later, he tries throwing the axe in his right hand at the armed personnel at which point he’s shot down. 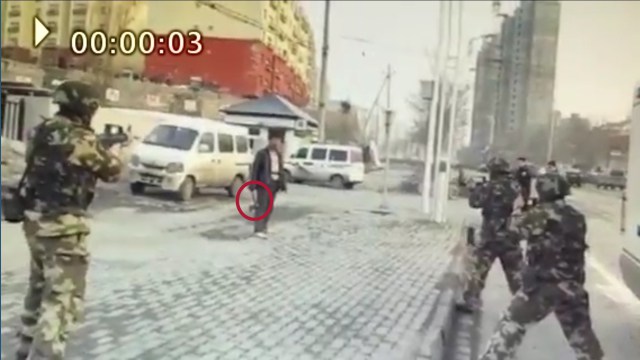 Axe in the right hand

In the following screenshots, one can see the axe that the man was holding in his right hand which is later found near the soldier’s feet who narrowly dodged the axe.

Axe in the right hand 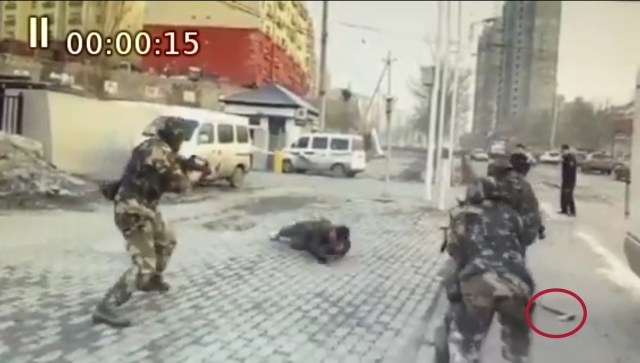 Again it was left to Sinha who is doing great work in exposing such fake news used often with disastrous consequences, to point out :

“When Pehlu Khan was murdered by Gau Rakshaks in Alwar, Rajasthan, a Bangladeshi video of killing of one Abu Syed in Coomilla district of Bangladesh was passed off as a Muslim mob killing a Hindu man. The text accompanying the post stated, “If a Muslim is killed in Rajasthan, it is “Hindu terrorism”, if a Hindu is killed in West Bengal, it is not even covered?”

When a Delhi University Student Gurmehar Kaur was in controversy recently regarding her appeal for peace between India and Pakistan, a fake video was circulated in which a woman was drinking with her friends in a moving car and it was claimed that the woman was Gurmehar. While, there’s absolutely nothing wrong even if it were Gurmehar herself in the aforesaid video, this misleading video was circulated since large sections of Indian society still look down at women who drink.

Recently, during the ongoing conflict between the Left and the RSS in Kerala, a video from Mexico was passed off as a RSS karyakarta being killed in Kerala.

It remains to be seen whether the Patra incident will take some of the steam out of the BJP spokespersons engines. As political sources said, BJP spokespersons have been primed to be aggressive, loud, rude and not even observe the basic courtesy of allowing others to speak. There is a clear cut style of functioning, that radiates from across television screens regardless of the channel. It was apparent in Patra’s behaviour on NDTV that was singled out only because the anchor protested and asked him to leave the show, but is a daily fixture on all channels when there is a debate that the BJP likes to look upon as its own.

Often the anchors themselves encourage the BJP on issues to do with militarisation, and ‘nationalism’ that centres these days around Pakistan and Kashmir. But most spokespersons do not need this support as they are well able to shout down the opponents, using the not so subtle ploy of grabbing the space and speaking incessantly so that others get drowned out. For the weaker guests there is intimidation, and often charges of not being nationalists, that now some of the political guests are confronting directly but it has taken at least over two years for this to even start happening.