14 Banks Set to Lose Rs,4,300 crore on Loans Given to Mallya's Kingfisher Airlines

NEW DELHI: Fourteen banks, 13 of which are public sector banks, stand to lose nearly ?4,300 crore on account of the loans they have advanced to the grounded Kingfisher Airlines (KFA).

Of this amount, the State Bank of India (SBI), India's largest bank and the biggest lender to the KFA, expects to make a loss of over ?900 crore.

This was revealed in an internal assessment prepared by a senior SBI official in December 2016. The assessment, which was not put out in the public domain, was recently shared with the Economic and Political Weekly by a whistle-blower.

The assessment of loss was prepared on December 7, 2016 by Govind Subbanna, chief general manager of the SBI's Mumbai-based "mid corporate group" and submitted as a memorandum to the bank's "Special Committee of the Board for Monitoring Large Value Frauds (?5 crore and above)" for its meeting that was scheduled and held nearly two months later on 17 February 2017.

Analysing various assets pledged by the KFA as security against loans, the memorandum concludes that not only does the market value of these assets amount to just ?1,565 crore, but the recoverable value works out to only ?1,071.64 crore against an exposure of around ?4,457 crore.

The total loss to the SBI and the other banks is calculated as the difference between their individual exposures and their share in this recoverable value. SBI, which has the largest exposure to the KFA amounting to ?1,202 crore, declared the loan as a non-performing asset in 2011 and classified it as a "fraud" in September 2016.

The memorandum pegs the bank's recoverables at arund ?200 crore. This assessment offers a first peek into the losses that Indian banks stand to incur on loans disbursed to the beleaguered airline, which was grounded in 2012 by India's aviation regulator, the Directorate General of Civil Aviation.

A detailed questionnaire was sent to the SBI chairperson Arundhati Bhattacharya by email and also by regular post on 17 May 2017. On 8 June, a spokesperson of the SBI responded to the questionnaire sent by the EPW through email stating that, "It is a policy of the Bank not to comment upon Individual accounts and it's treatment [sic]."

As many as 17 banks had extended term loans to KFA between 2009 and 2012, a period when the airline's business steadily deteriorated and it found itself unable to repay its dues.

In 2010, 14 of these banks formed a consortium to pursue these loans together. On 21 December that year, the consortium of banks signed a Master Debt Recast Agreement (MDRA) with KFA. The MDRA merged all the loans into a single term loan. Various assets that KFA had pledged to the banks as security were also pooled together. To this the MDRA added a personal guarantee offered by Vijay Mallya and a corporate guarantee by United Breweries (UB) (Holdings), a listed company which is a parent to the KFA.

In the case of a recovery, banks agreed to share the proceeds proportionate to their respective share in the total exposure. The SBI memorandum in the possession of the EPW uses the total outstanding exposure as on 31 January 2014 to calculate banks' respective shares. As on that date, the airline owed ?6,955 crore to the banks, including interest. 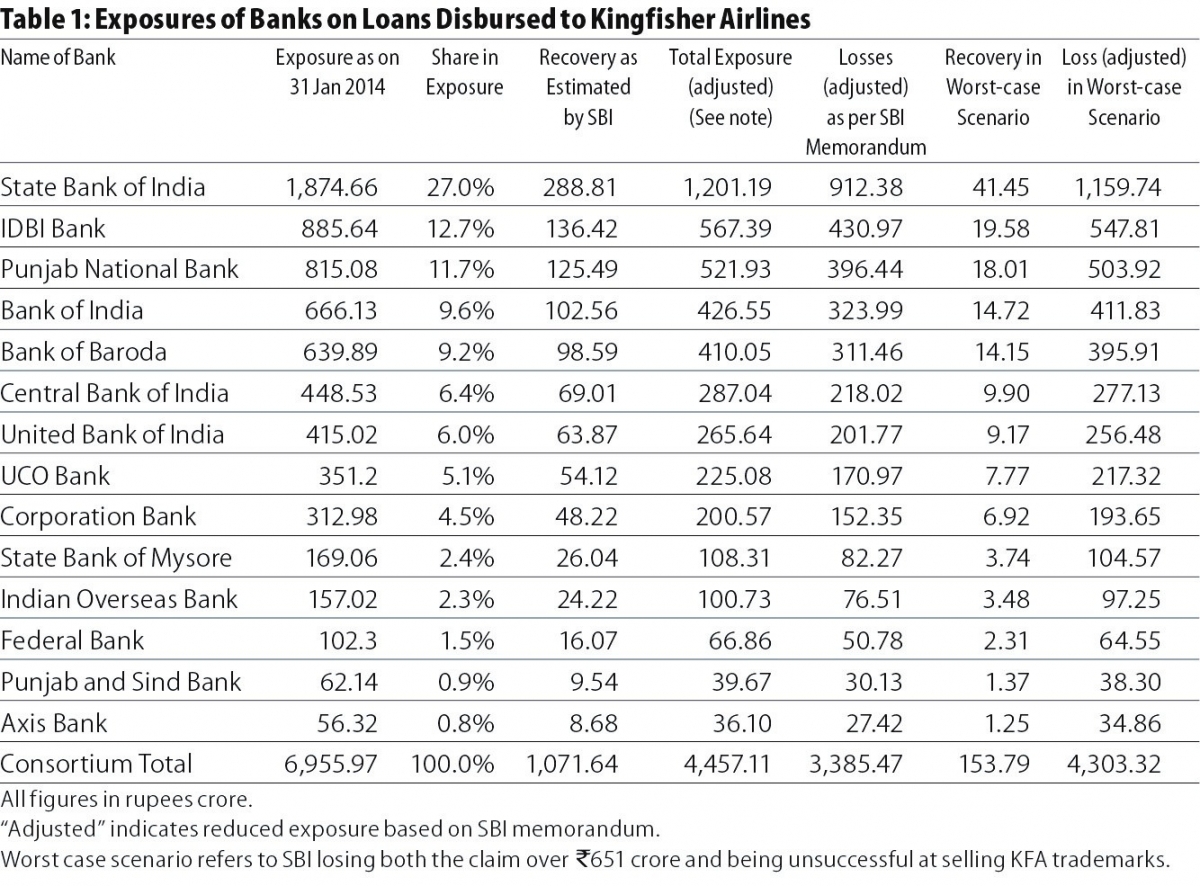 For the purpose of loss calculation, the memorandum considers SBI's exposure to be ?1,201.19 crore and not ?1,874.66 crore due on 31 January 2014. The SBI spokesperson did not clarify how and why this reduction came to be.

Assuming that this was on account of some recoveries the banks made in the intervening period, and further assuming that these recoveries were shared with other banks in terms of the MDRA, we have adjusted the consortium's total exposure based on the fall in SBI's exposure. Accordingly, the total exposure is assumed to have reduced from ?6,955.97 crore to ?4,457.11 crore.

The memorandum's calculation of losses is based on its analysis of how much value can be recovered from KFA's assets that were pooled under the MDRA. Interestingly, it does not consider recoverable value of the guarantees made by Mallya and UB (Holdings), even though these were also a part of the MDRA. We will come to that later.

The total market value of all current and fixed assets of KFA are shown to have a write-down value (WDV) of ?395 crore as on 31 March 2013. But this entire asset base is worthless, according to the memorandum. While the WDV of current assets of the company, including spares, consumables and book debts, was ?186.12 crore on 31 March 2013, their realisable value is considered zero.

According to the memorandum, this is because "the spares are spread across various airports and the value, quantity and quality of the same is unascertainable as on date."

Similarly, while the WDV of KFA's fixed assets, such as ground support equipment, was ?131.09 crore as on 31 March 2013, the memorandum finds them worthless because "these are not easily identifiable and spread over at various airports, as the company is defunct since December 2012."

The third set of assets deemed worthless are two helicopters owned by the airline, whose WDV was ?78 crore on 31 March 2013. The "DGCA ... informed that these two helicopters are stationed at Juhu Aerodrome, Mumbai. These are in unserviceable condition. Hence realisable value is considered 'nil,'" the memorandum states.

Two real estate properties of the airline were pledged to the banks: Kingfisher House, the airline's erstwhile headquarters near the Mumbai airport, and the Kingfisher Villa in Goa. The Goa villa was sold in March 2017 to Sachiin Joshi, a businessman, for ?73 crore, after three auctions failed to find buyers (PTI 2017b). These were held in October 2016, December 2016 and March 2017 at reserve prices of ?85.29 crore, ?81 crore and ?73.1 crore respectively.

Joshi's purchase, which has been described as a "private transaction," was not reflected in the memorandum since it was prepared three months earlier, in December 2016. The price Joshi paid is slightly higher than the memorandum's recovery estimate of ?68.23 crore, but lower than the true market value of ?85.29 crore, which it attributed to a July 2016 valuation by P C Gupta, a valuer.

Kingfisher House in Mumbai still has no takers. The memorandum states that its market value is ?106.95 crore based on a June 2016 report by Bhide Associates, a consultancy firm. It estimates the recovery value to be ?85.56 crore. In the last auction held in March 2017, the House failed to find bidders for a reserve price of ?103.5 crore (PTI 2017a).

Despite its pessimism about KFA's physical assets, the SBI memorandum is strangely upbeat about the airline's brand value.

KFA owns nine trademarks such as the 'KFA's trademark, logo, and taglines like "Fly Kingfisher" and "Fly the good times." Their patent registration restricts their use to the airlines business only, and not to beer or water. The SBI memorandum reports that the market value of these nine trademarks is between ?6.37 crore and ?313.8 crore based on valuation conducted in 15 different business scenarios by RBSA Valuation Advisors LLP, which submitted its report on 28 February 2015. The memorandum states a very wide range of the recoverable value of these trademarks: between ?5.4 crore and ?266.7 crore.

This is surprising. The realisable value of these trademarks is what a buyer would be expected to pay to use these trademarks on another airline. Obviously, the buyer would expect to recover this expenditure by gaining advantage of the "Kingfisher Airlines" brand. This seems improbable, as has been evident from the consortium's failure to sell these trademarks.

In April 2014, the consortium of banks led by SBI invited expressions of interest from the public for purchasing the nine trademarks. "The response to the public notice was not evident," according to the SBI memorandum.

Then, the consortium tried to sell the trademarks at two auctions: the first, held on 30 April 2016, had a reserve price of ?366.7 crore, while the second was held on 25 August 2016 at a reserve price of ?330.03 crore. Both failed. After the first auction failed, a Press Trust of India (PTI) report quoted an anonymous banker saying, "It is better to start a new airline company than to buy this brand and revive it."

After the second auction failed, an anonymous intellectual property rights expert told the PTI: "[The] value of trademark [sic] of the entire group has gone down to almost nothing and nobody will like to buy it."

Yet, the SBI memorandum seems upbeat about selling the trademarks, and proposes now to value and auction the nine trademarks separately. It is not clear if this excercise has begun.

The SBI does not seem to have learnt from banks' earlier encounters with Kingfisher's brand values.

In 2011, a year before it was grounded, the KFA brand was valued at nearly ?4,100 crore by consultancy firm Grant Thornton. This valuation, which the consultancy had said was only for "internal purposes" and not an investment advice, was nevertheless used by the airline as collateral to borrow more money from banks such as IDBI Bank, which, as a charge-sheet prepared by the Central Bureau of Investigation (CBI) has revealed, preferred the brand valuation as a collateral over tangible assets such as shares of United Spirits, a well-to-do sister concern which is under the UB Group. The CBI later arrested former IDBI Bank chairperson and other senior officers.

In 2016, the Serious Fraud Investigation Office of the Ministry of Corporate Affairs sent a notice to Grant Thornton for its brand valuation, according to a report in Mint newspaper (Sanjai and Upadhyay 2016). The consultancy clarified to the publication that it stood by its valuation which was "appropriate in the context of when it was done and the purpose for which it was done" (Upadhyay 2016).

Going by this, the question arises as to whether the SBI should be pinning hopes on a brand valuation of KFA prepared in 2015. After all, between then and when the memorandum was signed, the airline and its founder have arguably become national icons of corporate defaulters to public sector banks (even though they are nowhere the largest).

Several warrants have been served on Mallya, who has since resigned his membership of the Rajya Sabha or the upper house of Parliament and moved to the United Kingdom in an apparent self-exile, and from where he now faces extradition.

(Nihar Gokhale is an independent journalist. This aticle is courtesy Econonic and Political Weekly)