From Pawar to Chidambaram to Jaitley, the Farmers Have No Respite

NEW DELHI: In his recent column in the Indian Express, former Finance Minister in the UPA government P Chidambaram asks the reader the following question: ‘How many of you can name Mr. Sharad Pawar’s successor?’

The answer is most of us, and that is because when farmers were agitating in different parts of the country, Radha Mohan Singh, the successor to Pawar was practising yoga in Bihar. The criminal neglect of Indian agriculture is not the monopoly of the Indian National Congress; all the political parties are equally responsible for the plight of Indian farmers.

The table below shows the Prime Ministers, Finance Ministers, and Agriculture Ministers who were/are in office from 1995 till date. Members from all the political parties, from left to the right, at one point or another, occupied one or more of these offices. 1995 was the first year since data on farmers in being collected. 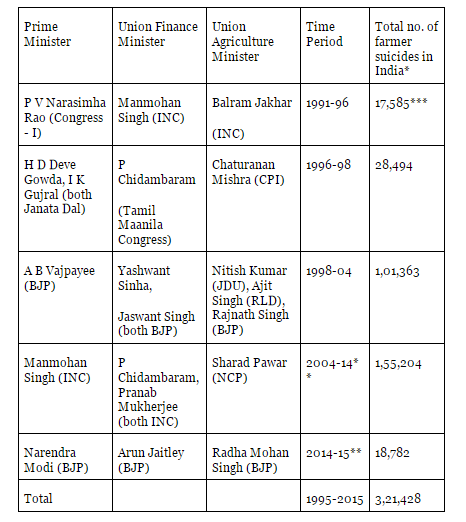 Note: If the Prime Minister held the portfolio of either finance or agriculture, or if any portfolio was held for 3 months or less, then it has not been mentioned in the above table.)

**The data for the year 2014 and 2015 is not exactly comparable with the previous years’ data, but can be used for establishing broad trends. For more details, see article by P Sainath (‘The slaughter of suicide data’ in Frontline, 32, 16, 2015).

*** This number is only for two years. I have added only half the number of farmer suicides in 1996 to the figure of 1995; this has been done in order to make it roughly correspond with the tenure of the government. Needless to add, suicides cannot be uniformly distributed throughout the year. The same process has been followed for rest of the years as well. For the year 1995, the breakup of suicides according to the profession is not available for Tamil Nadu, and hence figures of the state are not included in the above table.

Chidambaram also needs to be reminded that the final report of National Commission of farmers led by M S Swaminathan was submitted in the October 2006, and one of the recommendations of this Commission was the Minimum Support Price (MSP) for agricultural produce should be fixed at ‘cost+50 percent’. The then Congress government at the centre had approximately eight years to implement the recommendation, but that report was quietly buried by the government.

According to the report published in the newspaper Mint, the incumbent BJP government has promised to double the real income of the farmers by 2022, with the base year 2016-17. The same was confirmed by BJP National Spokesperson Gopal Krishna Agarwal on a programme (Inside Story: Why is the plight of Indian farmers’ being ignored?) on Aljazeera (aired on June 17, 2017).

It remains to be seen whether the BJP will fulfil the promise made to the farmers in its 2014 election manifesto (MSP = cost+50 percent), and whether the real income of farmers will be doubled by 2022 or not. Can the impotent opposition parties and subservient media force this government? At the present juncture, it seems to be a remote possibility. The only ray of hope is the agitation by the farmers. But is anyone listening?

The author is a pre-doctoral researcher in the Research Centre for Historical Studies, Faculty of Arts, University of Groningen, Netherlands.