Social Media and the Vocabulary of Hate

NEW DELHI: Considered the father of linguistics, Ferdinand De Saussure stressed on language’s power to shape reality. In a time where fake news is increasingly circulated and even utilised by major news outlets and individual agents to substantiate jingoistic assertions, language does not only shape reality, but seems to creates it.

On May 22, The Republic, a popular Indian news channel created by Arnab Goswami, aired an hour long debate solely to discuss and condemn the ‘anti-national’ sentiments presented by Indian novelist and activist Arundhati Roy. The debate came as a reaction to a fake news article circulated by a Pakistani site called ‘The Times of Islamabad’ which is known for its various fake news articles. The article stated that Roy visited Srinagar to give an interview where she allegedly berated the Indian Army’s actions in Kashmir. As it turns out, this never really happened. However, this source was credible enough for Goswami to somberly state on national television that “Roy went to Kashmir a few days back and abused the indian Nation and came back.” Later, to a panelist who attempts to defend Roy, Goswami quickly retorted- “Are you questioning a fact?”

Beyond the bizarre inaccuracy of these completely fabricated ‘facts’, lies an even more grievous issue - i.e. a vocabulary of generalisation, sweeping labels and hate generated by the increasing use of social media as a platform of expression. This is a vocabulary that enables people like the actor Paresh Rawal to tweet “Instead of tying stone pelter on the army jeep tie Arundhati Roy!”, as a reaction to the same fake news that duped The Republic.

The intimate codependency between language and reality could be seen in the vocabulary of peace and love during the anti war activism in the USA triggered by the Vietnam war. This era went hand-in-hand with a certain imagery. Think of the seventies, and you mind will conjure images of long haired, ‘groovy’ hippies in bootcut jeans, flower crowns and peace pendants. This was the vocabulary of the seventies.

The vocabulary of contemporary India is not so laid back. Instead, it consists of catchy hashtags in the form of neologisms that aim to generalise and label those who question the status quo. A generalisation which is perhaps a product of a fast paced world and 140 character limit that inhibits any exploration of complexity or nuance in our opinions and beliefs. This vocabulary includes terms such as sickulars, libertards, anti-nationals, the most recently and ingeniously coined liberandu, and of course the highly misogynistic presstitute.

The term presstitute is a portmanteau of press and prostitute and according to urban dictionary, which is the reference site for all new slang, the word has been created by AMerican trend forecaster Gerald Celente to refer to journalists that have a clear bias in their reportage. The idea is that these journalists have sold themselves to a particular ideology just as a prostitute sells his or her body. The Indian social media has increasingly used it to target women journalists, to make sexually derogatory remarks about them, and to demean and threaten them with assault.

These trolls include big Bollywood names with a great fan following, along with people posting from anonymous public accounts. In May, bollywood singer Abhijeet made a sexually profane remark on Snehla Rashid, an activist and student from JNU. Responding to a tweet wherein she shared an article exposing a BJP sex racket, the singer tweeted that “there is a rumour [Snehla] took money in advance for 2 hrs and didn’t satisfy the client..big racket”, ironically slandering her with the same sexual profanity that the article reported. 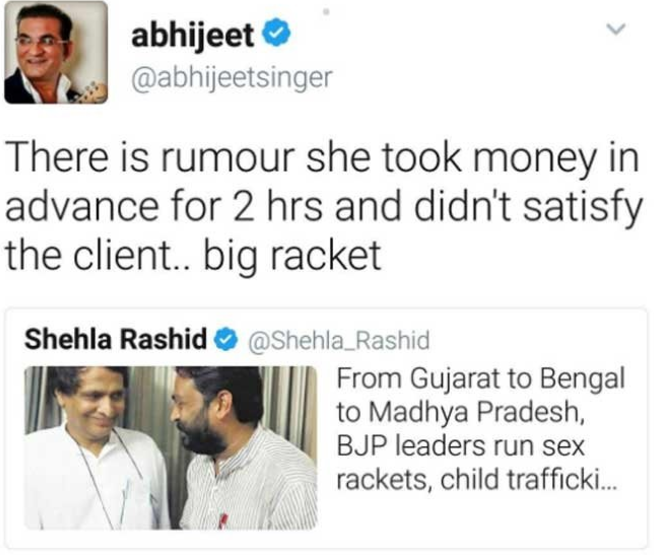 Rashid of course in not the only woman attacked with such slander. If you type in the presstitute hashtag on twitter, there will be at least five public tweets from anonymous accounts labelling Barkha Dutt, a presstitude (sic) who has ‘sold herself to Pakistan’ and produced ‘anti-national’ opinions.

This generalised labelling is not limited to the pro-government trolls on twitter, but extend to the anti- too, who have frequently used terms such as ‘bhakts’, ‘saffronites’ and even ‘bhaktimaan’ to refer to the right wing.

Even so, the crux of the problem remains to be the hate mongering and polarisation that the brevity and anonymity of social media platforms guarantee. The platform does not allow for dialogue between the two sides or for the production of nuanced arguments that suggest a solution beyond profanity and hatred. The vocabulary of the present is increasingly that of misdirected hatred and generalisations, or maybe the vocabulary merely reflects the current state of affairs.