PM Modi Invoked Gandhi, Even As Cow Vigilantes Lynched Another Innocent in Jharkhand

NEW DELHI: Not In My Name Protests across the country compelled Prime Minister Narendra Modi to break his silence on the spate of lynchings, the last being of 15 year old Junaid in a train compartment. But even as he was speaking, or just after that, cow vigilantes struck again, this time in Jharkhand.

Again on the basis of rumours that a particular van was carrying beef, a mob pulled out the driver, beat him mercilessly as a video of the attack shows clearly. And burnt the vehicle down.

The driver was left unconscious and at the time when The Citizen received the news, he was still alive. Even as the editorial team was trying to verify the news, the driver Alimuddin alia Asgar Ansari was lynched by the mob that did not stop threashing him even though he was barely conscious. 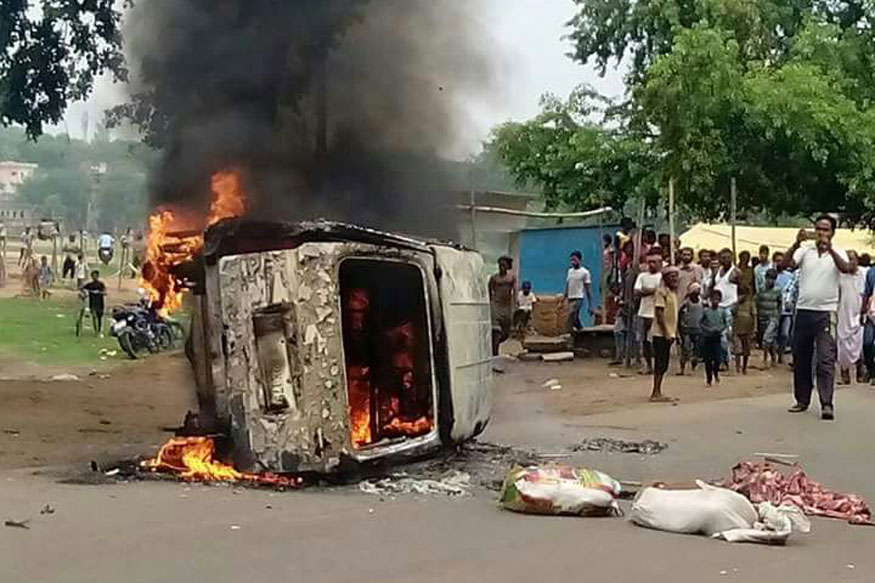 Speaking at the centenary celebrations of the Sabarmati ashram in Ahmedabad PM Modi said that “no person in this nation has the right to take the law in his or her own hands.” He said, “Mahatma Gandhi would have us what a true gau rakshak is and he would never have approved of cow vigilantism.”

And in an unprecedented second reference to Gandhi in the same speech, the PM said, "Let's all work together. Let's create the India of Mahatma Gandhi's dreams. Let's create an India our freedom fighters would be proud of." He said that violence will not provide solutions to a problem, and was “unacceptable.”

This comes after the heinous attack that killed Junaid and left his brothers injured in a train compartment just before Eid. Spontaneous protests were held all over the country and in London and Boston as well to protest against this and other lynchings that have traumatised the minorities in particular. After several days of inaction the Haryana police moved to arrest four---bringing the total to five---of men alleged to have attacked Junaid and the others.

PM Modi, clearly responding to the protests last evening, came out with a warning. Incidentally almost a year ago, in August 2016, the Prime Minister had issued a similar warning to cow vigilantes after the brutal attack on Dalit youth who were stripped and beaten. And a video of the act posted on the social media. This had led to outrage and protests all across Gujarat at the time.

“I feel really angry at the way some people have opened shops in the name of cow protection. I have seen that some people commit anti-social activities through the night, but act as cow protectors by day”, the PM had said. After the PMs speech warning the cow mobs that no one should take law into their own hands, the Ministry of Home Affairs had also issued warnings to the states denouncing cow vigilantism, and urging the state governments to take strong action against this kind of violence.

The PM had expressed concern about the death of cows from consuming plastic and urged the people to ensure that this did not happen.

However between August 2016 till June 2017 the cow lynchings have not stopped. Muslims in particular have remained the targets and numerous incidents of beatings have been reported from different states. This picked up with the lynching of Pehlu Khan on April 1, 2017 where he and his relatives were stopped on the national highway and badly beaten by a mob for carrying milch cows for which they had the documents. Khan died.

As in 2016 , again this year, the Prime Minister did not call on the states to ensure that the vigilantes responsible for such incidents should be arrested, prosecuted and punished. He did not mention the Una incident last year, and kept silent about the terrible attack that left Junaid dead inside a train compartment.

After the horrific lynchings that had thousands on the streets, it was expected that the Prime Minister of India would:

Reach out to the families of those who had died at the hands of the cow mobs;

Assure the people that the government would look after the marginalised sections of society, and take measures to ensure that the cow mobs would not prevail;

Direct state governments where such lynchings and attacks have taken place to immediately compensate the impacted families for their loss;

Warn violators of stern action, arrests and prosecution if they resorted to such acts.

PM Modi stopped short of specifics and kept his remarks today, as in August last year, confined to general comments. Not a single Minister or leader from the government in UP, Rajasthan, Madhya Pradesh and nw Haryana has visited affected families, to ensure that those injured received proper medical treatment and assure them of security and action.

A Prime Minister feared by his own minister as a “taskmaster’ had urged state governments last August to repare dossiers of these cow protectors. This year he did not report what the response has been, and judging from the police inability to make arrests in most incidents, clearly there has been little progress on this front.

Not In My Name protests not just in India but also London and Boston attracted a diverse crowd with people sitting in silent vigil in some cities, singing songs, and raising slogans in others to make it clear to the government that these attacks will not be tolerate any more.