Gujarat Dalit Stir Preparations On In Full Swing, After Adityanath Cracks Down on Lucknow Meet

NEW DELHI: One protest by Dalits for rights and justice in Uttar Pradesh was stopped by the Yogi Adityanath government with arrests and detaining travelling activists at railway stations enroute to Lucknow, even as the preparations for another in Gujarat on July 11 are in full swing. The first was in protest against soaps given to Dalits last month by the Kushinagar authorities to bathe themselves for Adityanaths visit, the second is a two day meeting and march to observe the first anniversary of the stripping and flogging of Dalit youth at Una.

75 year old former Inspector General of Police S.R.Darapuri who was arrested, along with a few others, by the Uttar Pradesh police for a few hours from the Lucknow Press Club on Monday is unfazed. “By arresting me they wanted to send out a message to the Dalits and other weaker sections of society that no one is safe, it was just an effort to spread terror that if this can happen to a retired police officer no one can take their freedom for granted,” he told The Citizen in a brief conversation.

Interestingly, although the media spotlights focused briefly, if at all, on Darapuri’s arrest where he along with a host of other individuals and organisations had organised a seminar on “Dalit Atrocities and Remedies” the crackdown on the Dalit activists travelling from Gujarat and Bundelkhand for the meeting went largely unreported.

At least 43 Gujarat representatives were pulled out of a train by the cops at Jhansi railway station, detained for the night, and forced into a train back to where they had come from on July 2. They were carrying a 125 Kilogram soap cake for Yogi Adityanath, Chief Minister of UP, with inscription of Buddha and BR Ambedkar on it. The Dalits planned to gift the soap to the CM as a mark of protest against the soaps handed out to Dalits of Kushinagar before Adityanath’s arrival there last month, with instructions from the local authorities to bathe and clean themselves before meeting him. Needless to say the police confiscated the huge soap cake.

Recounting the details Darapuri also said that a group of Dalit activists from Bundelkhand who were to travel to Lucknow as well for the meeting were stopped by the police. He said that when he and the few with him arrived at the Lucknow Press Club for the seminar that was to start from 12 noon they found the place swarming with cops who had taken over the venue. “We sat down to discuss what we could possibly do but then we were arrested under charge of breaching the peace and violating Section 144 (inside a closed space!)” the former IG said.

Darapuri has been consistent in raising a voice against the attacks on Dalits, and more recently has been speaking of unity of all sections of society as necessary to preserve democratic India. He is a quiet, soft spoken individual, frail and yet not one to mince his words. After the few hours detention, he said that everyone was now deliberating the next course of action and how this could be taken forward. He regretted that the CM had decided not to allow any opposition, but was enthused by the outpouring of “solidarity and support” on the social media.

Darapuri himself will not be joining the Gujarat protests but said “we are in full support.” Young leader Jignesh Mevani and others are in charge, with large crowds expected for the two day program that includes a “massive” conference in Ahmedabad. Mewani told The Citizen that this protest will be all inclusive, with farmers, minorities, Dalits and all sections of society participating. He said that while the focus will be on Una as it will be the first anniversary, the agenda will encompass all the issues from lynchings to farmers distress. He said very categorically, “attacks on Dalits and Muslims have gone up, gau-rakshaks are enjoying protection from the government. Therefore, on July 11, we will tell the government to keep the cows and give us what we have been promised.”

A key demand of Mevani’s larger Rashtriya Dalit Adhikar Manch is for the government to stop manual scavenging and the use of Dalits to pick up dead carcasses of animals, and to start allocating land to the landless Dalits and Other backwards. He said that the Dalits will give a call to vote against the BJP if these demands are not implemented. Mevani emerged as the face of the Una resistance last year, organising and leading a huge march through this belt of Gujarat after the video of the Dalit youth being flogged created shock waves across the country.

Mevani’s has set his profile picture on Facebook evocatively as: 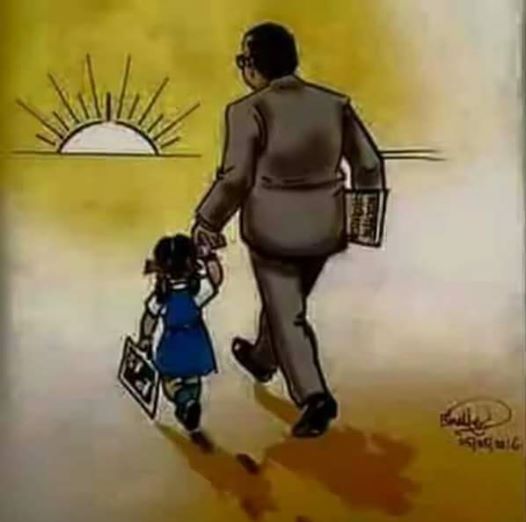