Dalits Challenge Adityanath's Writ in UP

NEW DELHI: Uttar Pradesh Chief Minister Yogi Adityanath has resorted to strong arm measures to curb what he clearly perceives as resistance from sections of the Dalits in the state, but interestingly the arrests of targeted leaders have failed to break the spirit of the most marginalised community that seems determined to get its rights.

In a strange situation, where the major Opposition parties in the state---namely the Samajwadi party, the Bahujan Samaj party and the Congress---have fallen silent like weak-kneed bystanders, Dalits themselves under a new fiery leadership have taken the bull of justice by the horns. This despite, sustained effort by Adityanath to cripple the movement by disrupting scheduled meetings, and arrests of key leaders.

Saharanpur started the confrontation, with the Dalits bursting on to the scene just as Adityanath and his Hindu Yuva Vahini were reportedly having a merry time hounding the minorities across the state in reported, and mostly unreported incidents that were filmed and circulated with the idea of striking terror. However, matters went awry in Saharanpur with the Bhim Army under young leaders like Chandrashekhar being seen on the national scene for the first time through a strong, and unexpected assertion.

The Adityanath government lost little time in hitting out, although for several days it was unable to trace Chandrashekhar who emerged at a huge rally in the heart of Delhi to make a passionate speech, and let it be known that he was quite prepared to surrender to the cops. No one dared at the time for fear of reaction, but picked the young man up from Himachal Pradesh later, slapped countless cases against him and locked up in jail with at least another 35 of his party comrades.

Since then, despite the strong arm tactics, the Dalits have been pouring into Delhi with two huge protests in less than a month. This second protest now at Jantar Mantar demanding Chandrashekhar and the others release was attended by Chandrashekhar’s mother Kamlesh Devi and interestingly, Bahujan Samaj Party founder, late Kanshi Ram’s sister Swarn Kaur as well. The gathering was largely of youth from all neighbouring states with slogans of Jai Bheem renting the air.

“I will protest, sit on dharna and also stage indefinite fast till my son is not released. We will fight. I have no expectation from the Narendra Modi government or the Uttar Pradesh government, especially since the violence has been triggered by the very rise of Yogi Adityanath,” Kamlesh Devi told PTI.

Interestingly Kaur added, “(BSP leader) Mayawati built her entire career on my brother’s work. This is a new movement spearheaded by the youth. Whenever there’s injustice, the youth will rise.” The youth collected donations for their leaders and colleagues in jail. Judging from the enthusiasm and the support the protests will only continue more so as the second and third rank leaders, according to local activists, are filling the vacuum created by the arrest of the top leadership of the organisation.

In an environment of impunity, a young Dalit leader of the CPI(ML) in Mirzapur district Jeera Bharti was stripped and assaulted by a local landlord Chatru Patel on July 3. When her 14 year old son rushed to her rescue, according to the party, he was also beaten up. The police reportedly reached the spot after 90 minutes. When Bharti tried to register an FIR the next day at the local police station, the BJP MP from Marihan Rama Shankar Patel also from the same community arrived along with a large number of supporters and the police refused to invoke relevant sections from the law against violence on women and the Scheduled Castes and Scheduled Tribes (Prevention of Atrocities) Act. 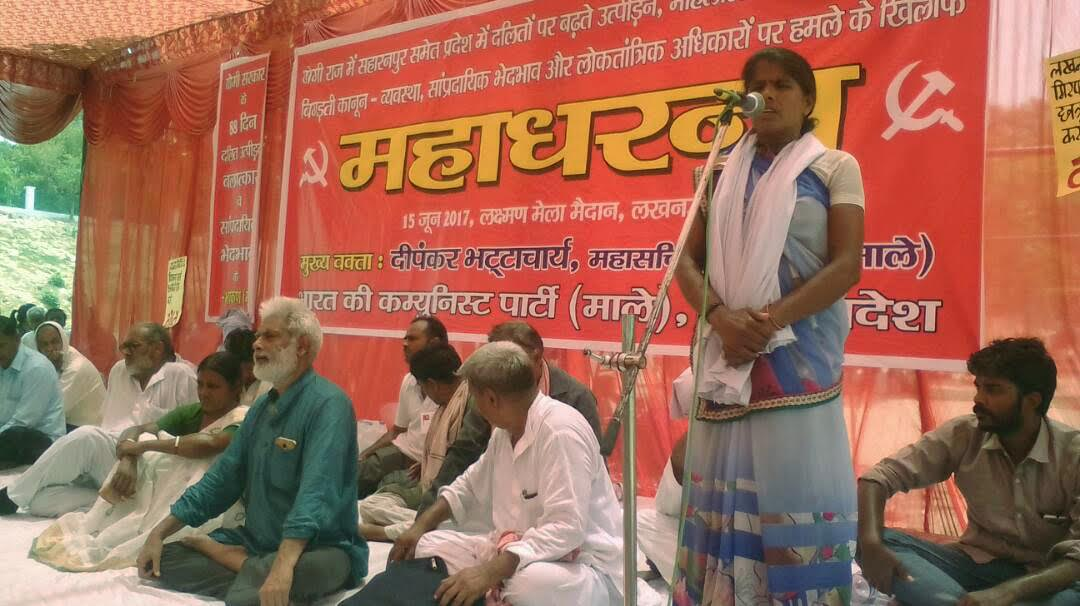 Bharti’s crime: she enraged the local landlords because of a recent campaign through which the work wages of agricultural wagers were increased to a Rs 100 per day.

The CPI(M-L) has now announced a national protest on July 6-7 to ensure that a case is registered by the police under the relevant sections of the SC/ST Act.

As reported by The Citizen, Adityanath also spared no effort to crush a second effort, this time a seminar at the Lucknow Press Club being organised by individuals and Dalit organisations along with others. The Chief Minister rushed his police to Jhansi where they pulled out a group of Gujarat Dalits travelling for the meeting in Lucknow with a 125 Kg cake of soap for him. The soap cake was taken away, and the group sent back to Gujarat. Another posse of UP police went to detain a group of Dalits from Bundelkhand, preventing them from going till Lucknow for the meet.

Getting no resistance from the Lucknow Press Club, the cops went in and occupied the premises, and arrested their own former Inspector General of police SR Darapuri and others to ensure that no one was left to address the scheduled meeting. As Darapuri said, “it seems I was arrested to terrorise all others to shut up.”

Have they succeeded? It seems not, as the groups are meeting again to discuss the way forward. Darapuri said that the arrests would not kill the spirit, and the determination for rights and justice. The 75 year old former police officer told The Citizen that he was not part of any one group, and while “they keep linking me to one or the other they also know I am with no one, but justice.”

Adityanath’s writ , despite the strong arm action, is being challenged and despite the hard measures he has not been able to subdue the Dalits in his state. Interestingly, the resistance is coming from the Ambedkarites, about 60 per cent of the Dalits in the state, more educated, more political, and more aware of their rights than many other sections of the community.