This Is How Hate and Violence is Being Generated: From Muzaffarnagar to Basirhat

NEW DELHI: The scourge of fake news and photoshop is upon us. A morphed image started a riot and now more morphed images are being used to fuel it. We saw tempers flare over a photoshopped image of Kaaba leading to Basirhat riots. Barely had the situation settled down that there is an attempt to fan tensions using a new set of fake images. How did we get here? Where do we go from here?

We are caught in a vicious cycle of fake news, manufactured outrage and increased polarisation that is now spilling out of social media into the real world in the form of violence. Let us take a look at some attempts to fan communal tensions post the Baduria riots.

This Facebook post by person named Bhabatosh Chatterjee is going viral. He has posted it twice. The translation of two accompanying messages read as follows:

“In Baduria, Hindu women are getting molested. Hindus, who are still supporting TMC, are you Hindu? If you are born of a Hindu father, then you will roar against these radicals. All Hindus of West Bengal must unite.”

“Aparna Sen, where are you now? Peaceful people (read Muslims) are stripping Hindu women at Baduria” 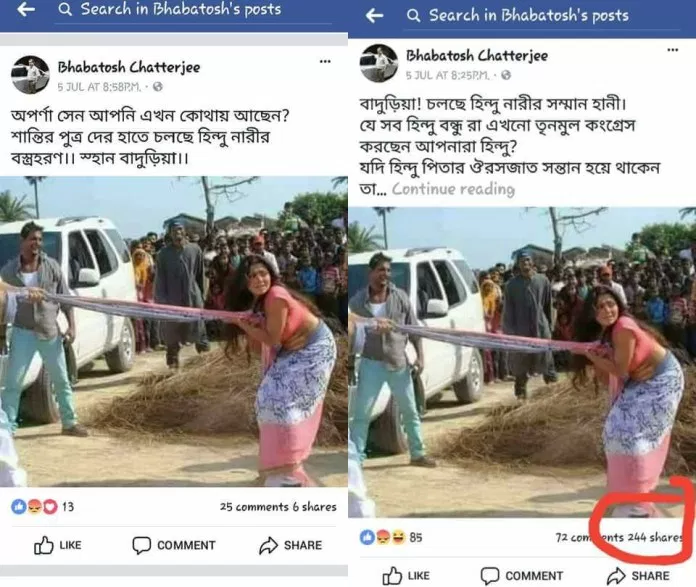 The same claim was also shared on Instagram by Vijeta Malik, who according to her Facebook profile is a State Executive member of BJP Haryana. She shared the image with a message about Hindus being under attack in West Bengal. 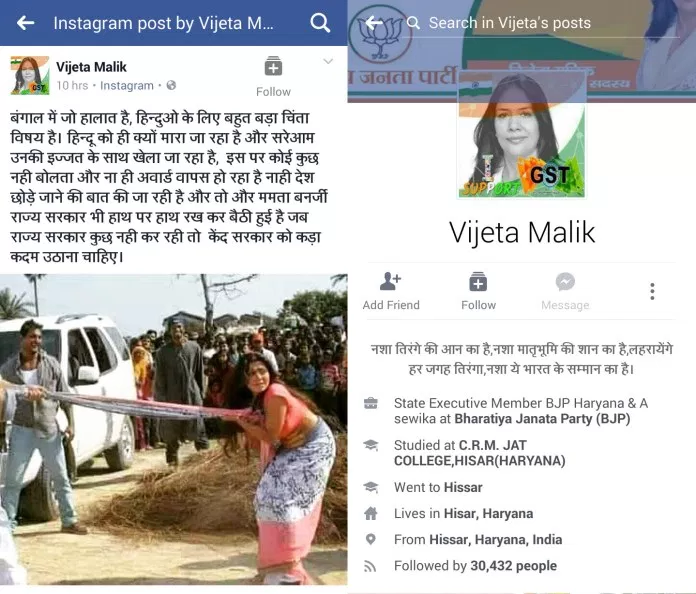 Reality: The image is a scene from a Bhojpuri movie titled “Aurat Khilona Nahin”, released in 2014. The image has been taken from a blog post. 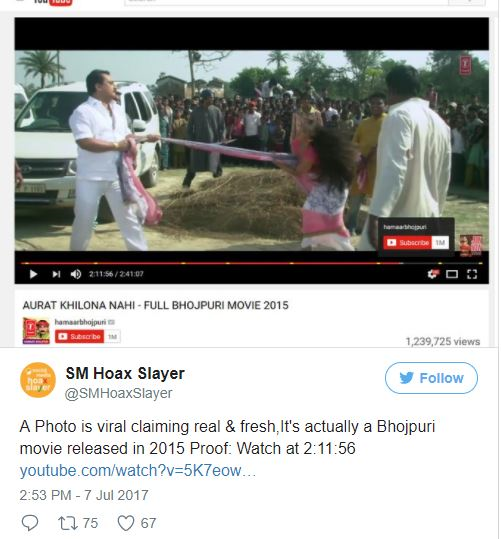 The image has been deliberately picked from the Internet to fuel tensions and incite violence. Chatterjee did not delete it after people pointed it out to him that it is fake. He shared it a second time with another inflammatory message. Vijeta Malik on the other hand has quietly deleted her inflammatory post. As expected, there is no explanation or apology from her end for misleading her followers.

Twitter user Gita S. Kapoor, one of the select few followed on Twitter by Prime Minister Modi has shared an image saying, “Souvik’s parents. Attacked with no fault of their’s. But they do not fall under the #NotInMyName narrative. #HinduLivesMatter”. 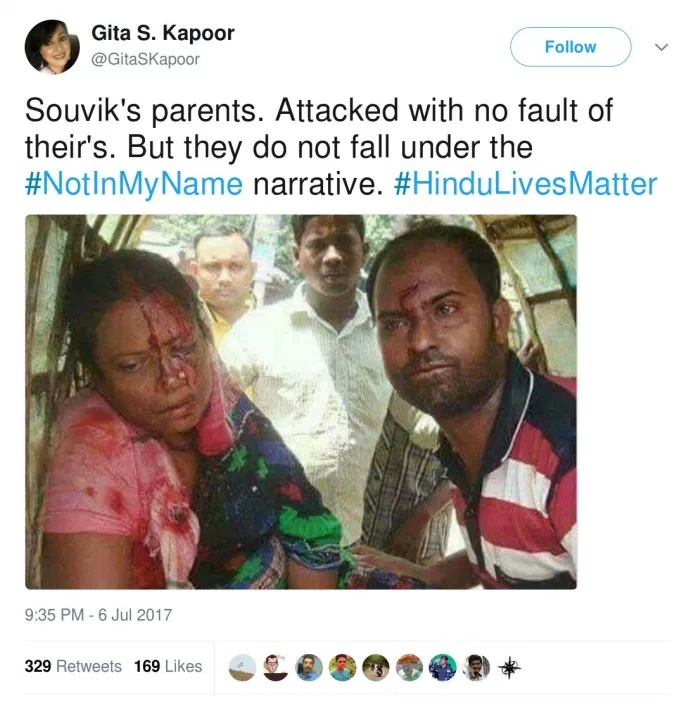 Reality: This same image was circulated during 2016 Dhulagarh riots as well as that of a Hindu family being attacked. The image is originally from Bangladesh where a Hindu family was attacked. Read about it in this 2016 Lallantop article. 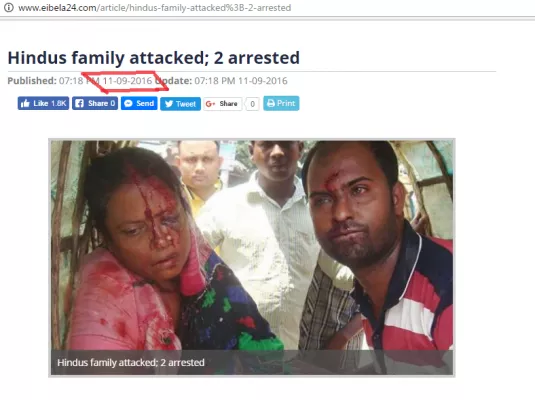 Kapoor’s profile mentions that she is a VP of a BJP Mahila Morcha and a psychological counsellor by profession. Perhaps in a case of confirmation bias, she too has fallen for an image that she must have received on WhatsApp or seen on one of the many sites that routinely peddle fake news.

A Twitter user, @Sunil_Kashmir, who describes himself as a “Modi Bhakt” who wears his religion on his sleeve, shared this image of a man called Karthik Gosh, lunched (sic) by Muslims in Basirhat. The image is in form of a poster created for ease of sharing on social media. 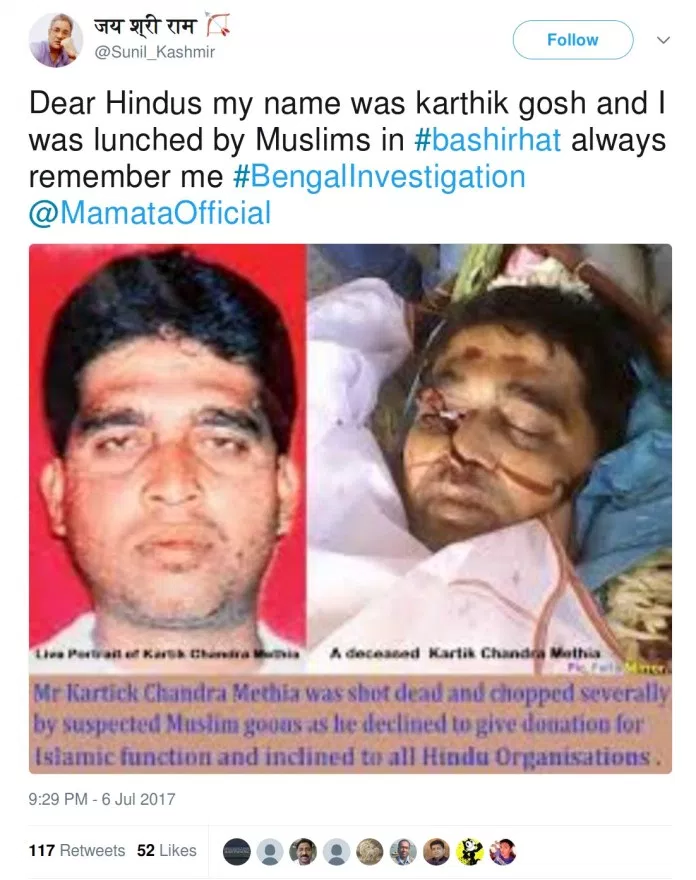 Reality: This is an unrelated image of a person by the name of Kartik Chandra Methia, shared by Hindu Samhati and our Hindutva websites in 2014. The blogpost reports his murder and subsequent protests in Falta, South 24 Parganas. An article in the Times of India, reported that murder was solved in 2014 with the arrest of five people.

The first casualty in Baduria was a 65 year old man called Kartik Ghosh. Seeing the similarity in names, Hindutva handles seized this opportunity to circulate an old picture to fan an already tense situation.

In an already volatile situation, media could play a responsible role to stop the spread of rumours and calm tensions. It could help to bust the fake news and rumours that are doing rounds. What does it do instead?

Here are a few examples: Times Now featured polarising hashtags, #HindusOnHateList and #HindusDontCount. Zee News ran a show and posted a video on YouTube titled, “West Bengal is not safe for Indians but heaven for Muslims?” The special guest for the show was Tarek Fatah, the Canadian of Pakistani origin, who is particularly interested in Indian affairs and is known for his rabble-rousing views. 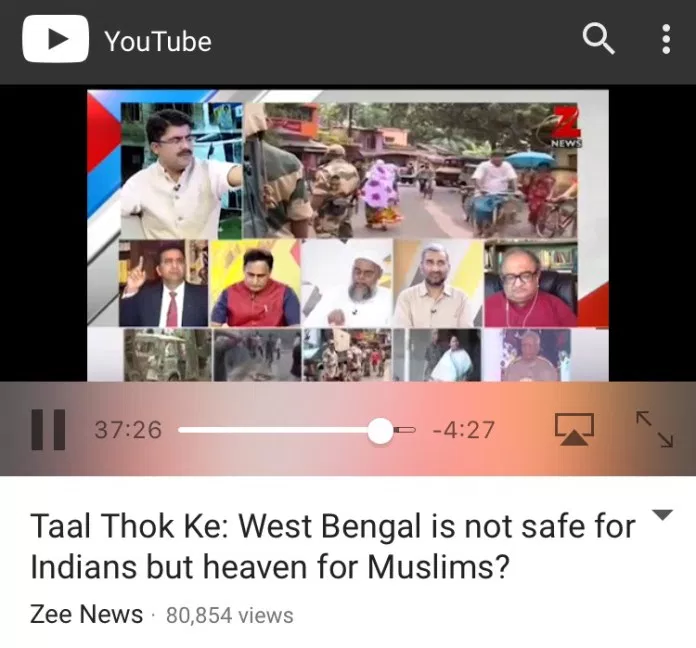 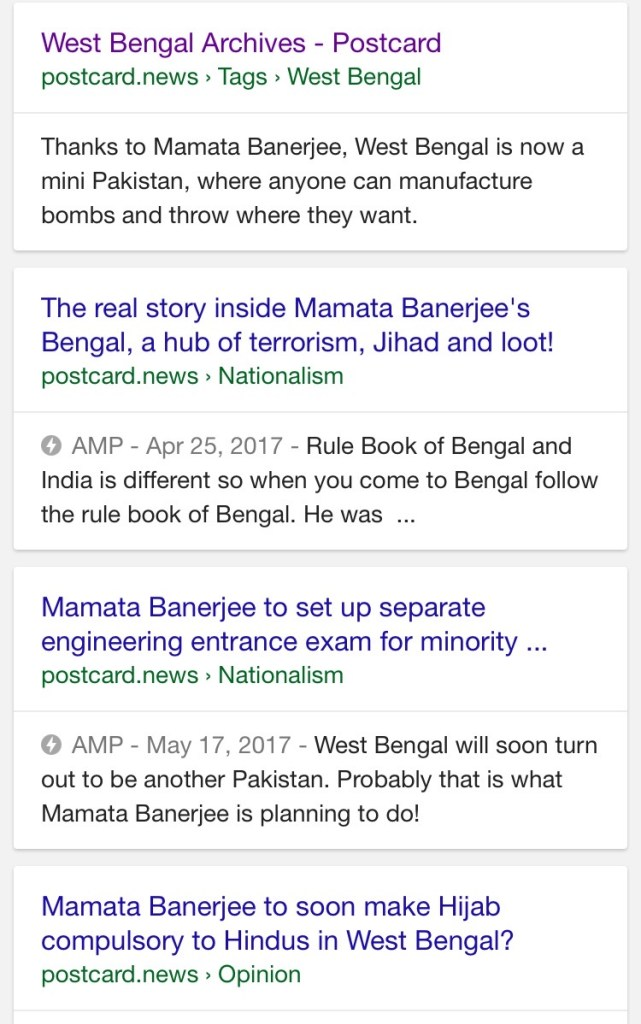 Idealogical differences aside, it is worthwhile for people from all walks of life to reflect on who is really benefiting by spreading these rumours that destroy the social fabric of the country.

Circulation of fake news, morphed images and doctored videos has reached alarming levels. Repeated exposure only to a certain perspective leads to social conditioning at a young age. The 17 year old boy was perhaps not the one who photoshopped the offensive image yet he shared it without a second thought probably because of this social conditioning.

There is absolutely no doubt that violence over a mere image is reprehensible. Growth in religious-mindedness has led to a growth in general intolerance all around us. People take offence over photoshopped images, paintings, depiction of characters in movies, you name it and there is someone somewhere who is upset. There are no winners in this race to offend and take offence.

The situation with fake news and photoshopped images is clearly getting out of hand. There is an urgent need for a multi pronged approach with efforts from online platforms and the government to control this epidemic of fake news. Morphed images are a dangerous tool in the hands of those who have a single-minded agenda to polarise and incite violence. It is not just irresponsible, it is criminal.

It is also very important for social media users to be alert. Alt News has a simple advisory regarding fake news: Do not believe everything you read on social media particularly if it’s without a source. Know the sites that routinely spread fake news. Every quote with a picture is not authentic. Research before you share as sometimes a simple google search can reveal the truth. Most importantly, remember, it is a vicious cycle, and the more the fake news is shared, the more it propagates itself. Do not circulate what you are unsure of. Be the one that breaks this cycle of fake news.

(The Citizen is carrying this article courtesy AltNews as its extremely important in the current environment where fake news is being exploited to generate hate, anger, suspicion and large scale violence.The West Bengal government has declared the video to be fake and arrested one person with appeals to the public not to get carried away by the sinister use of the social media for violence, in which lives and livelihood of all are lost)