NEW DELHI: Patidar leader Hardik Patel, in a series of tweets starting with condolences for the seven Amarnath yatris killed and 16 injured in the attack in Kashmir, has asked the BJP to stop crying about the terror attack and start speaking of what is going to be done now, and also hinted at a possible ‘conspiracy’ against the background of Assembly elections due in December this year. 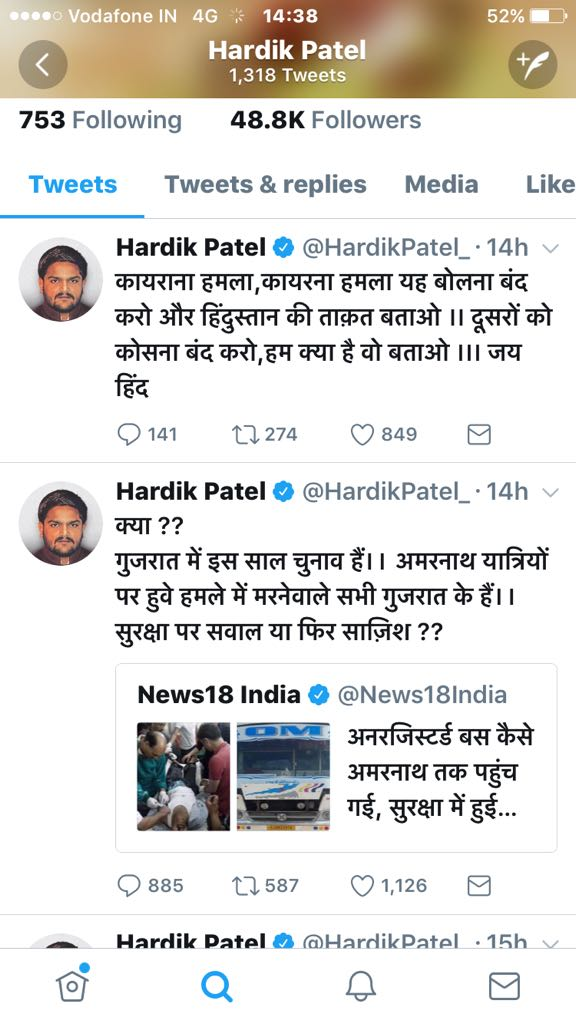 The state government,on the other hand is, busy preparing to receive the bodies of Amarnath yatra pilgrims and the injured---mostly from Gujarat--- and plans to organise a state wide yatra or as local leaders said, perhaps even a bandh. However, it is almost certain that the BJP will use the terror attack to whip up pre-election frenzy, with the attack, terrorism, Kashmir, Muslims all again becoming part of what the party members themselves expect now to be a high voltage campaign.

A Muslim activist said, “well they will use this to further polarise the vote, and of course the minorities are again feeling insecure. We are worried, as in the recent history of Gujarat we are worst impacted by all this.” Hardik Patel, however, was not particularly reticent in his tweets stating, “there are elections in Gujarat this year. Amanrnath yatris who weere attacked were mostly from Gujarat. Is this an issue of security or conspiracy?’

The Congress party has for once decided to take up the issue as well with candelight demonstrations at the district levels for the yatris, but with several questions for the BJP: your government is in Delhi and in Jammu and Kashmir, now who is responsible for the security of the yatris? Why were you not able to ensure their safety?” Local Gujarat leaders said that effigies of the Prime Minister and Chief Minister will be burnt as well. AICC leader Digivijay Singh in fact had set the ball rolling shortly after the attack, using the social media to raise similar questions, and criticise the BJP government for failing to protect the yatris. The Congress meetings will speak of unity as well.

Efforts to polarise the communities are not meeting with the same success currently as in 2002 and after when Narendra Modi was the Chief Minister. There has been some erosion in the Dalit base after the Una floggings with Muslims, Dalits, farmers, activists, youth organisations participating from all over the country in the first anniversary of the Una atrocity in Ahmedabad today. The message from this meeting, according to Dalit activist Jignesh Mevani will be for unity of all the marginalised sections cutting into what is now being increasingly defined as divisive politics being propagated at different levels by the BJP.

The slate to rally around the voters in the name of terror politics is not that clean now, given the opposition from the younger leaders who have been more vocal than the somnabulent Congress party on this issue. Interestingly Gujarat just saw widespread protests against the Goods and Sales Tax with the textile workers in the lead, but being joined by various industries and businesses across the state. These protests--particularly in Surat yesterday---have worried the state government as this has come from “within’ the BJP support base.

The state government, faced with considerable opposition, is determined to use the Kashmir terror attack to the hilt, and rally around the constituents from straying to the protest fields that are becoming fairly active in Gujarat. However, as a civil rights activist in Ahmedabad said, “this time the response seems to be more lukewarm, but let us see, the BJP seems to always be able to pull the rabbit out of the hat even as the Congress watches stupefied.”

The attack was horrific and eyewitness accounts speak of the bus coming under fire from all sides. The bus driver Sheikh Salim Gafoor Bhai kept driving the bus for about a kilometre, and later told reporters, “"God gave me strength to keep moving, and I just did not stop. The firing went on and on, so I didn't stop. I kept driving.” The injured, many of them in Anantnag hospital, were all of the view that had he panicked many more would have died. Salim Ghafoor has emerged as the silent hero of this terrible tragedy, driving the vehicle through and eventually past the hail of bullets.

Kashmiris, individually and in organisations, have come out in strong condemnation of the attack. Many have demanded a probe into the attack by an impartial agency.