KOLKATA: The Bharatiya Janata Party, on an extremely low ebb in West Bengal after its role in West Bengal’s communal violence was exposed, is now drowning in the vortex of the Amartya Sen controversy. More so as the film The Argumentative Indian on Bengal’s own was to have been screened in Kolkata before it was stopped by the Censor Board asking for cow, Hindutva way of life, and Gujarat to be bleeped.

The BJP that had clearly hoped to gain ground in the state after the Badurai-Basirhat violence seems to have instead been pushed to the margins, as the politically savvy people of the state came together along with a responsive media to curb the violence, and restore Hindu-Muslim unity.

So much so that an Other Backward rally organised by the BJP in Kolkata on Tuesday was hardly a grand show with local journalists estimating a crowd of less than 2000. This was even more shoddy in comparison with a Left Front rally where the crowds were huge, and the attendance again according to locals “impressive.”

The Amartya Sen controversy might not be the last nail in the BJP coffin in West Bengal, but has done the party incalculable harm in the state. More so as the film director Suman Ghosh made it very clear that he would not agree to cut one single word, and hence the documentary would not be aired. The Censor Board is currently under Pahlaj Nihalani who has described himself as a Modi bhakt on a previous occasion.

But more commendable has been the manner in which the people of West Bengal came together to not just stop the communal violence, but to work to expose the role of the Hindutva brigade in spreading rumours and false news to provoke the communities, and ensure that the violence did not spread. Sources on the ground said that both Hindus and Muslims came out almost immediately to form peace committees without political goading, and urge the agitated populace not to fall into the political trap.

The local media, including the powerful Anand Bazaar group, played a commendable role in puncturing the falsehoods and directing the people towards amity and harmony. In the process journalists said, the violence did not spread and after a week peace is also returning to the affected areas. “Do not give the credit to the Left Front or the state government,” a CPI activist said, “it is all because of the people of West Bengal.” According to him the BJP has lost even more ground in the state now.

Ysterday the West Bengal government arrested secretary of the BJP IT Cell, Asansol, Tarun Sengupta for spreading a fake video that had created communal disharmony. Alt News that has been doing commendable service in exposing the vast use of such false propaganda by the BJP had on April 23 this year reported that the video in question was old and had been deliberately used by Sengupta to foment violence. The BJP leader had claimed that this was of Muslim IPS officers beating up a supposed Hanuman bhakt, and posted it on his Facebook wall. 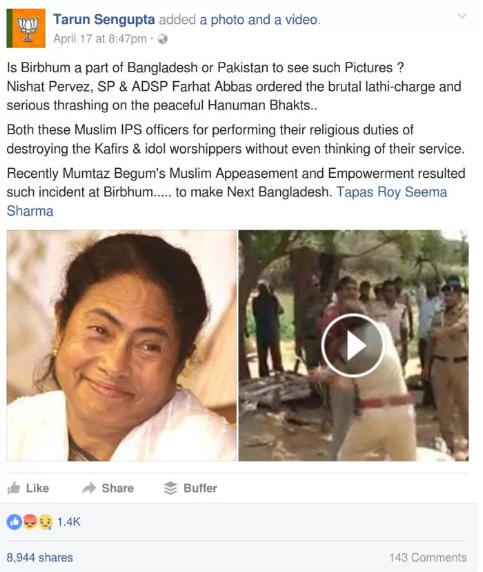