BENGALURU: An old controversy is likely to become central to the forthcoming Assembly elections in Karnataka, with the ruling Congress government setting up a committee to look into the demand for a state Kannada flag. This is an emotive issue in the state, symbolising all that is associated with Kannada culture, language and above all unity.

The red and yellow Kannada flag has been an emotive symbol with the courts hearing petitions for it to be declared a state flag in the past. This time around, however, it is not a fringe organisation but the state government itself that has taken the issue up with the appointment of a nine member committee to design a state flag and submit a report on giving it legal sanctity. If this does pass the courts scrutiny at any stage, Karnataka will be the second state in India to have its own flag after Jammu and Kashmir that comes under the purview of Article 370.

Karnataka Chief Minister Siddaramaiah has taken up the issue before the forthcoming Assembly elections in the state. And it comes along with increasing Kannada hostility to attempts by New Delhi to impose Hindi on the state. Former Karnataka chief minister and Union minister D V Sadananda Gowda dismissed the move when questioned by reporters, saying, "India is one nation and there cannot be two flags in one country."

However, the issue has the potential to sweep across the state as currently the anti-north sentiment in the state has spiked. As has the demand for a separate flag with the glimmerings of a new campaign again seen around this. More so as the Kannada flag has been in use across the state by Kannada centric organisations and first emerged in the 1960’s Kannada movement. Ma Ramamurthy, a Bangalore based journalist and activist is credited with this, and designed a yellow flag which later was further redesigned. It is on full display on November 1 every year when the state observes Karnataka Formation Day, Karnataka Rajyotsava. It is used by any number of organisations in the state as an ‘official flag’ and the Congress has clearly decided to capitalise on this issue before the elections.

Congress Rajya Sabha MP Rehman Khan, however told The Citizen that this was clearly something that the CM wanted, and had not been discussed in the party as yet.

Politically various Chief Ministers of the state have played ping pong with the issue. In 2009 B.S.Yeddyruppa issued a notification restricting the use of the flag on government offices. Later D.V.Sadananda Gowda said that the Kannada flag will be made compulsory in all government offices and educational institutions on November 1. The courts were also brought into play, and now the current government has appointed a nine member committee to look at the use of the state flag afresh.

The Karnataka Rakshana Vedike that has been one of the major organisations promoting the separate flag for the state just held a round table conference for linguistic equality and opposing the imposition of Hindi. The circular reproduced below is self explanatory: 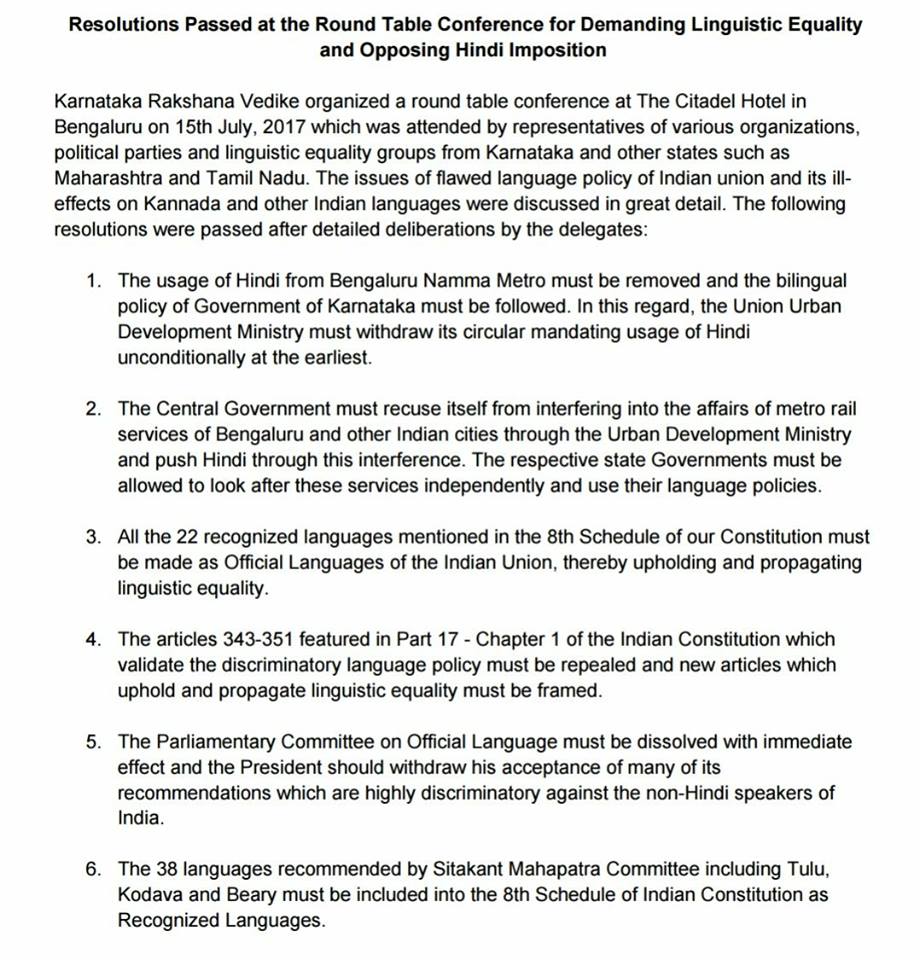 Sources said that CM Siddaramaiah has seized upon a highly emotive issue, and one that is placing the Kannadas at direct loggerheads with the BJP that is now increasingly perceived as a north-Indian, pro-Hindi party. The formation of the committee is a political move in this direction.