Maa Narmada Has Been Betrayed, Planting Trees Will Not Save the Displaced People

NEW DELHI: I just could not believe it when I saw the pictures of a procession of women with the usual traditional worship mode- small thalis, with flowers and a lamp, mobilized to walk together to worship Maa Narmada – posters giving publicity to government programs like beti bachao. 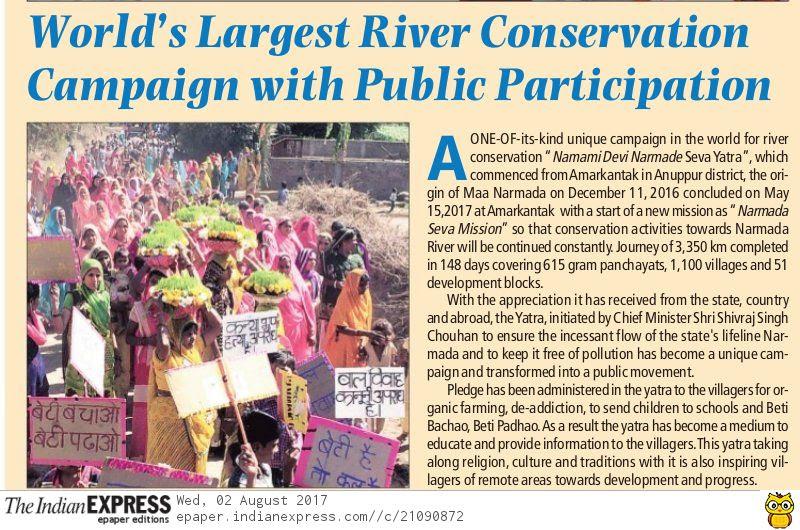 I was outraged, because there have been such strong women led rallies in the past organized by the national peoples’ movement NAPM, to not only protect the river , but their lives, threatened by the raising of the height of the dam, as also its unique environment .

I was one of those who joined the Rally for the Valley in 1999. The height of dam was to be raised from 90 to 100 metres. Medha had said that she would drown herself in the rising waters if this was done. Many women from the households in the villages surrounding the dam also offered to drown with Medha. 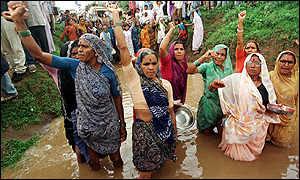 In joining the march I too had my moment. I had decided that I would also drown with Medha , if it led to that, as it looked criminal to destroy the enormous wealth of India especially when science and technology driven people, as well as experts from the World Bank, across the board, had shown how the benefits from raising the dam height would be drowned by the losses - loss of fertile land, inundation, salination, loss of crops - and for what? To build canals, to take water, to what was considered the arid region of Gujarat. The injustice was so violent that I thought there was no point in continuing with life, if such crimes could be enacted by the Indian State. 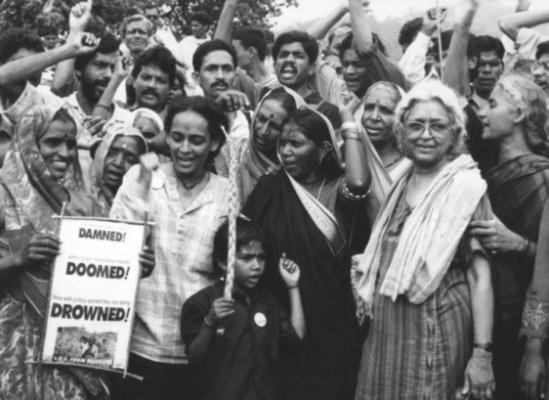 Arundhati Roy, Devaki Jain and Medha Patkar. The girl in the center is Dedlibai’s daughter.

Joining the rally gave me an unforgettable experience. There was Slogan shouting for creating mass unity, such as “hum sab ek hai” with hands raised, fists clenched; massive public meetings where lanes and roofs are choked with people, flags fluttering from everywhere including on flag posts in jeeps and cars,. Villages packed with people and mountains slopes completely filled with human beings almost like tiles on a roof, flags, clapping, slogan shouting “Awaaz do , hum ek hai”, “vikas chahiyay, vinaas nahin “; bandh nahin banega”. Posters and wall graffiti, “say no to the dam”, was also the atmosphere in every village and city through which we walked – Badwani, Pathrad,, Maheshwar , Anjad, Nisarpur, Chotta Badtha - all the way to jalsindhi, the villages which are notified as t o be submerged by the Sardar Sarovar project The difference was that the people assembled were neither mobilized by political cadres nor entertainers. They were drawn to discuss “vikas” development, their rights.

That threat by Medha that she would drown had its effect that time, in that the weir was closed and the water did not rise to drown us, as we were all in the water up to our neck. Joining that movement was an education. Not only were women extremely literate but also there was the issue of the impact, they had awakened to a kind of macro knowledge which in itself was a value.

But we lost. Then the issue of rehabilitation was taken up and for all of the next 10/20 years.. Those who had voluntarily surrendered and were promised rehabilitation found that the men ended up as rickshaw pullers and women as domestic workers or prostitutes - similar to the outcome for women of farmer suicides in Maharashtra.

At that time there was a very strong movement by a wide range of people, which included not only members of the Planning Commission, but also special committees formed by the Planning Commission to look at water resources. The late Ramaswami Iyer an expert on Water Resources was the principal civil servant acting for the Expert Group on dams.

Proposals were made by those who were for raising the height of the dam, which was already 90 meters to 100 meters. There were others who were arguing that there will be devastation as a result. That fields, homes, forests would be inundated and the displacement would be enormous. Further there was research to show that the land around the river, the valley had the richest alluvial soil in the whole of Asia.

The issue was a worldwide issue, going up to the setting up of the World Commission on Dams which was examining the benefit and cost of building large dams. The Commission’s review revealed the enormous costs not only to people but to the geographical wealth of an area , by high level dams.

For decades social leaders and the people of the valley have been agitating that even the promises made to rehabilitate , after destroying not only their livelihood but the natural wealth of the valley , have not been kept. They are now displaced persons. Now to suggest that Maa is being protected, with processions and pictures of tree planting are outrageous.

Unbelievable, if not unacceptable, that the very state that created that havoc should now put forward theatre/ drama of having women march to worship Ma Narmada? In fact how dare they mimic such an act after reducing the lives of all those who lived around Maa Narmada into impoverished agricultural laborers moving them from farmers to labourers? Maa Narmada has been betrayed.

This is the kind of shameless nature of development projects which are now engaging not only India but the entire developing world.

There were similar pieces of erudite advice given to the Chinese Government about building the three gorges dam and what it would do to farming and farmers. But the dam was built. In Brazil thousands of forest people are shot dead in order to build another dam. And for whom are all these dams built? For bringing power to the urban and for irrigating other people's land while depriving those who have them of farming for their livelihoods? Shameless cruel theatre by the Government.

(Devaki Jain is a well known economist and writer, who has worked mainly in the field of feminist economics. In 2006 she was awarded the Padma Bhushan for her contribution to social justice and the empowerment of women).

Devaki Jain is a well known economist and writer