NEW DELHI: Well he is a Guru begging attention. From humble beginings and yoga, Ramdev is clocking in Rs 10,000 crores and still counting. The monetary seven heavens have opened for this Haryana-Uttarakhand guru, ever since he decided to support Prime Minister Narendra Modi for Prime Minister in 2014.

The catchline of course, despite the big plans to move into the Rs 50,000 crores figure by 2020 remains: “we need the wealth to serve the people.”

Ramdev’s Patanjali has been such a mega success in such short span of time that it has attracted global attention. In fact the yoga that spurred his success, is now second to the big bucks of Patanjali that is taking on well established MNCs and surging ahead.As the Economic Times reported a few weeks ago, Patanjali is opening new production units in Uttar Pradesh, Maharashtra and Madhya Pradesh and once in operation these will place him in a new league altogether. According to ET figures Patanjali headquartered at Hardwar grew from Rs 5000 crore in 2015-2016, jumping to a straight doube of Rs 10000 crores in 2016-2017. Ramdev expects this to increase to Rs 50,000 crores by 2020, and of course insists that he will be creating five lakh additional jobs in the coming years.

Ramdev has never had the going so good, with even the Opposition’s few efforts to rein him in now giving way to resigned silence. CPI(M) leader Brinda Karat was amongst the first to bring his business to public attention in 2005 when she said that Divya Pharmacy, that he ran as part of his charitable trust but ostensibly as the business unit, was not paying workers well and was using questionable ingredients in the medicines. In fact, she had said that human bones were part of the medicines being sold. The Pharmacy did come under some scrutiny of repackaging medicines and selling these as its own, a charge that it denied of course.

In 2011, the Congress government at the centre reportedly ordered his arrest. He was surrounded by the cops, and escaped dressed as a woman. This was caught on camera and made him a laughing stock. And not just that various charges were filed against him, with money laundering and tax evasion being in the list.Ramdev, as per the media reports at the time, swore to take revenge and defeat the Congress. He backed Narendra Modi for PM, the latter won, and Ramdev emerged as the man with the plan, that now foreign journals are writing about with a visible sense of awe and bewilderment. The cases seem to be locked in files and nothing has been heard of these since.

For instance the big Forbes story on Ramdev---he likes the media, is accessible, runs five Patanjail television channels himself, and appears on local shows all the time----records his phenomenal growth. But raises questions about the supply chain, quoting experts as pointing to the disconnect between his super fast growth and the supply that is not expected to match this. In fact the Forbes article notes, almost as if in passing, a serious fact. That the reporter of the story visiting a Patanjali factory “spotted several cartons of Patanjali competitor Amul's ghee. (Balkrishna said his operation had run out, so it had bought these to mix in its products.)” Balkrishna, with Ramdev since their early days of 1993, has been quoted extensively in the Forbes article. The article further quotes

Arvind Singhal, chairman of Technopak Advisors, consumer products and retail consultants "When you have such an extraordinary growth, you need to build your supply chain for sourcing and procurement, and your vendors need to be compliant. Patanjali is not fully cognizant of the challenges of this. There's no way that you can grow at this pace and have your supply chain grow with you."

Ramdev is a dynamo, addressing business meetings where he strongly advocated their cause with , abusing businessmen should be banned in the Indian Parliament ... you want their taxes, you want their money to fund your political parties ...stop cursing them ... every businessman is not a thief.” Appearing on comedy television shows to banter with guests, display his extraordinary skills, and revel in the revelry. Digvijay Singh of the Congress party was direct as is his wont, “"Baba Ramdev is not a guru, he's a businessman. If Congress were scared of him, it would have put Ramdev behind bars. Ramdev is more of a businessman now. He charges Rs.50,000 for teaching yoga.”

Ramdev has not really been involved in women related cases. There was an 80 plus woman who insisted that he had winked at her at a meeting, a charge that was roundly denied as the yoga man’s supporters insisted that he had a problem with one eye that keeps flickering. There was celebrity Sofia Hayat who met him and later said that he was looking at her chest, but there was no touching or feeling: 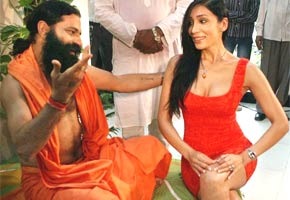 Ramdev himself has not shied away from women. He has developed yoga for women, he has addressed meetings of women entrepreneurs with advise as to how they should tackle business, and he appeared on television to discuss women and girlfriends. As in the following show where he spoke of kisses, and flying kisses, saying he does not know what even girlfriend means. Even as he said that despite being a sanyasi he was accosted by women all over India...babaji we love you... and the world but has stayed away, and cites the instance of a woman in Los Angeles who offered her everything to him, and how he literally ran away.”Never had a girlfriend, if I had anyone I would have been in jail like many of the babas today” and insisted he has never thought of having a physical relationship with anyone ever.

Politically Ramdev is finally on sure ground. His days of being hounded by the Congress and other opposition leaders seems to be over, as his relations with the BJP top leaders flourishes. After the BJP won the Uttarakhand polls, really the Himalayan base for Ramdev and his business, an exultant Finance Minister Arun Jaitley was quoted in the media as saying, ““The role played by Ramdev in awakening the voters is similar to the struggles of Mahatma Gandhi and Jayprakash Narayan who stayed away from power. He has no greed for any post... His motto is to strengthen the system. Ramdev’s campaign against black money and corruption is similar to those of Mahatma Gandhi and Jayprakash Narayan.”

The media has written extensively about the links between Ramdev and the BJP, how his business has flourished since 2014 with land discounts in states controlled by the BJP (the Huffngton Post placed this figure alone at $46 million), as well as access to land free of charge.Reuters reported on a video by a trust controlled by Ramdev where BJP leaders held an oath for nine pledges that included, protection of cows, swadeshi, amongst others.

Ramdev enjoys a special relationship with Prime Minister Narendra Modi, that is visible to all in government and outside, and opens doors that might have remained inaccessible otherwise. PM Modi in May this year inaugurated a research centre at Baba Ramdev's Patanjali Yogpeeth in Haridwar. “PM is Rashtra Rishi” said Ramdev.