NEW DELHI: The National Broadcasting Standards Authority has directed Zee News to issue a public apology and pay a Rs. one lakh fine following a complaint that objected to the channel branding Raza as part of an ‘Afzal Premi Gang’ for reciting his poems in the ‘Shankar ‘ Shaad Mushaira.’ The NBSA has awarded the highest punishment in its jurisdiction, reaffirming that big media houses cannot trample over the rights of citizens to freedom of speech and expression, which includes the right to dissent.

Raza was branded as part of an ‘Afzal Premi Gang’ on a Zee show Afzal Premi Gang ka Mushaira – which first aired on March 9 with multiple telecasts over the following days. The programme was based on the annual Shankar-Shad Mushaira that took place in New Delhi on March 5 -- it was a poet’s conclave where Raza had recited several poems. Raza says that the Zee programme telecast only selective portions of certain poems and went on to brand him as an “anti national” based on a prejudiced and baseless line of reasoning.

“Mr. Gauhar Raza, an eminent scientist and poet, was maligned, defamed and hate engineered against him by the malicious, concocted and motivated news telecast carried by Zee News in March, 2016. Mr. Raza was branded as a part of an “Afzal Premi Gang” for reciting his poems in the ‘Shankar - Shaad Mushaira’.

A complaint was then filed by Mr. Raza with the News Broadcasting Standards Authority against Zee News along with another joint complaint filed by eminent artists like Mr. Ashok Vajpeyi, Ms. Shubha Mudgal, Ms. Sharmila Tagore and Dr. Syeda Hameed. Advocate Vrinda Grover arguedf on behalf of Gauhar Raza and other complainants.

Upholding the rights of Mr. Gauhar Raza, ZEE news channel has been held liable for their false, malicious and distorted coverage. NBSA has directed that

A copy of the order is as follows: 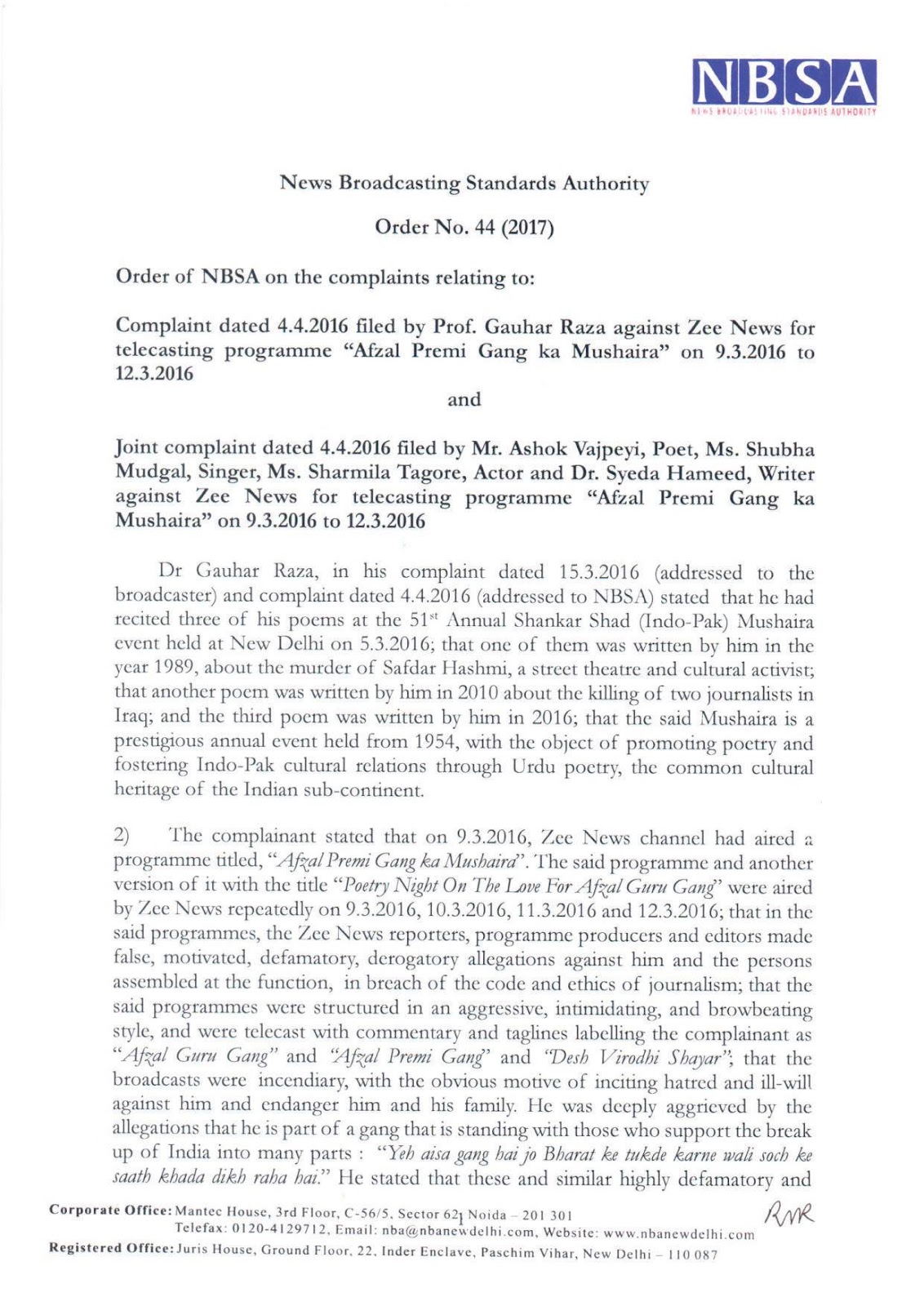 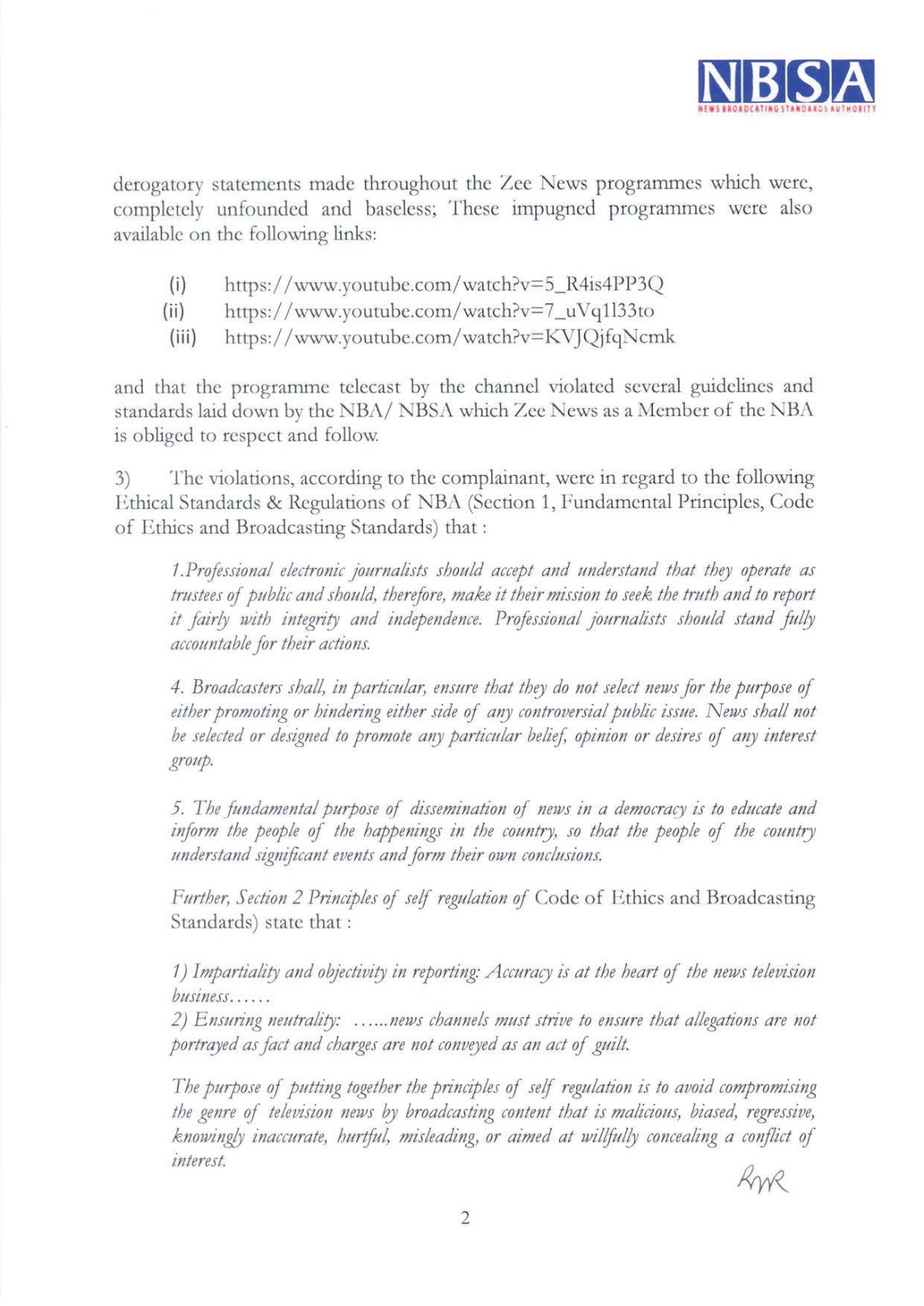 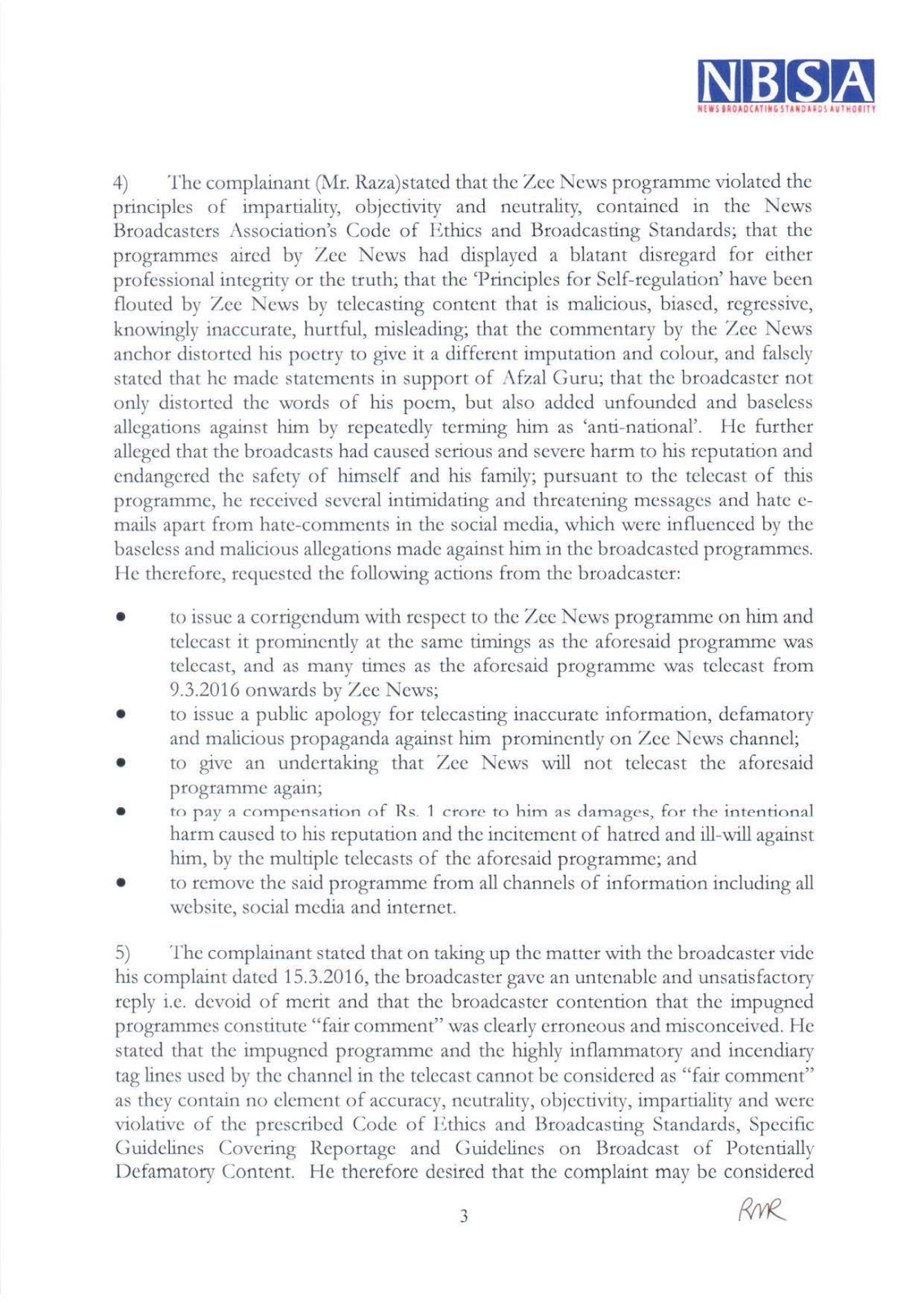 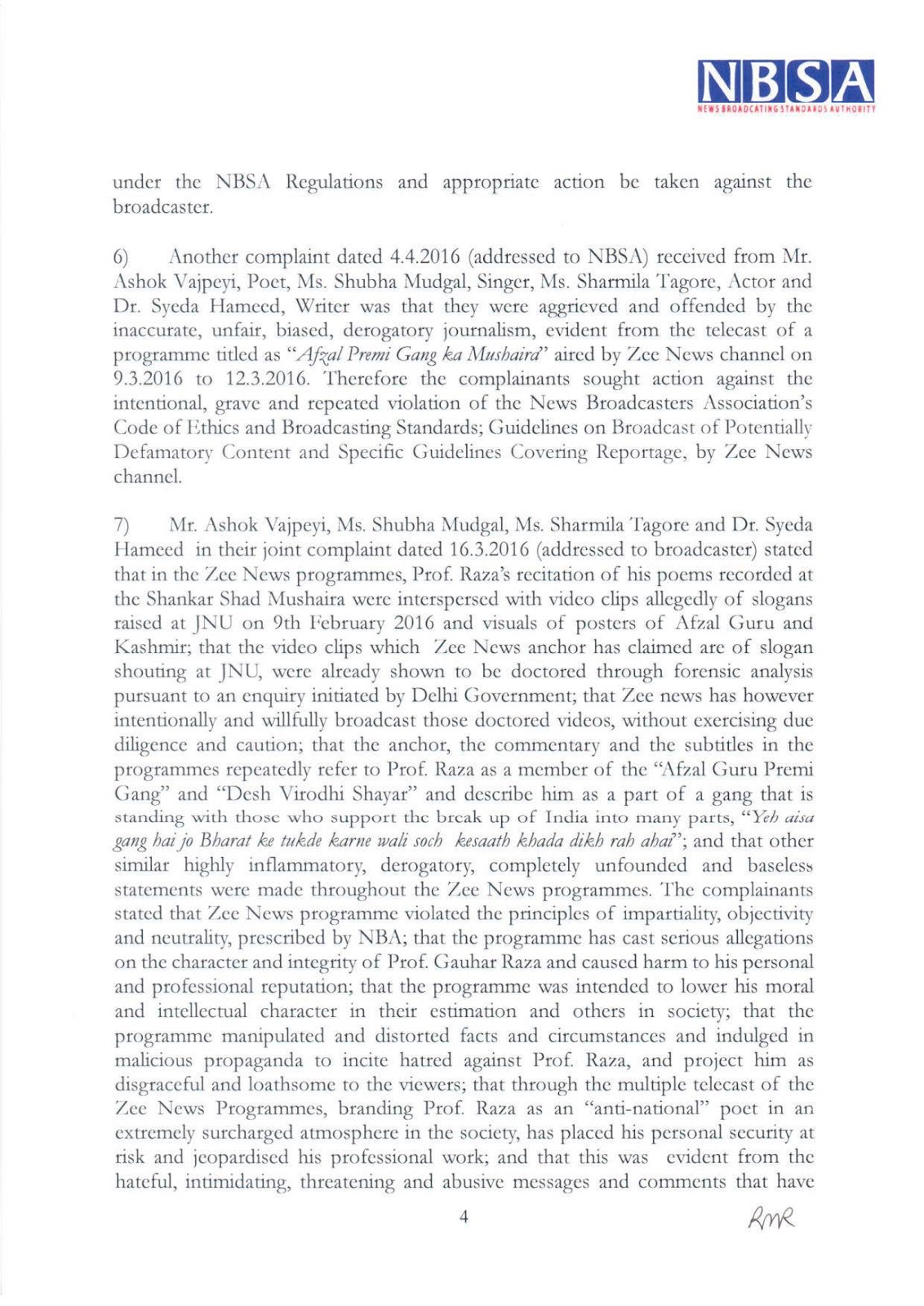 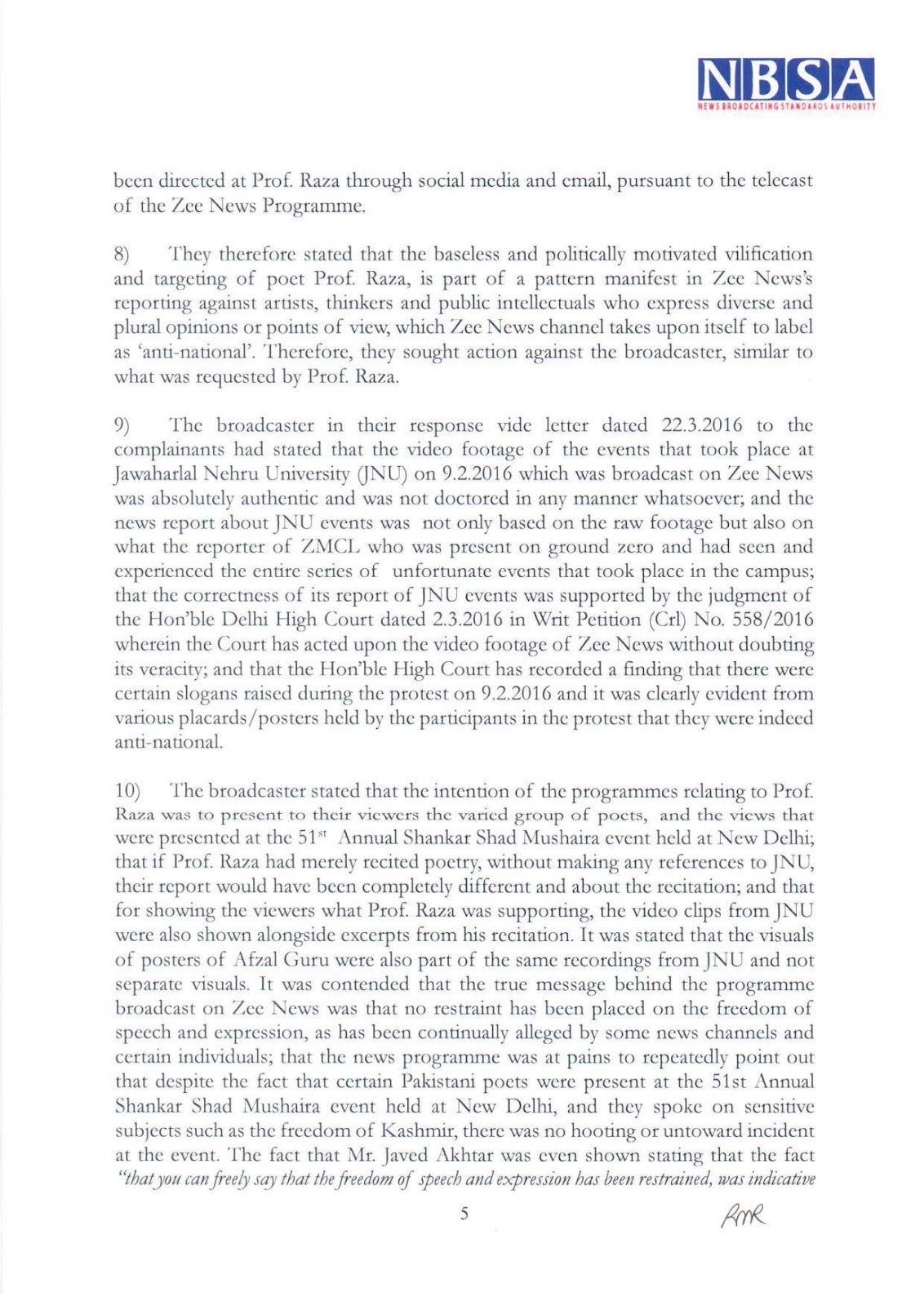 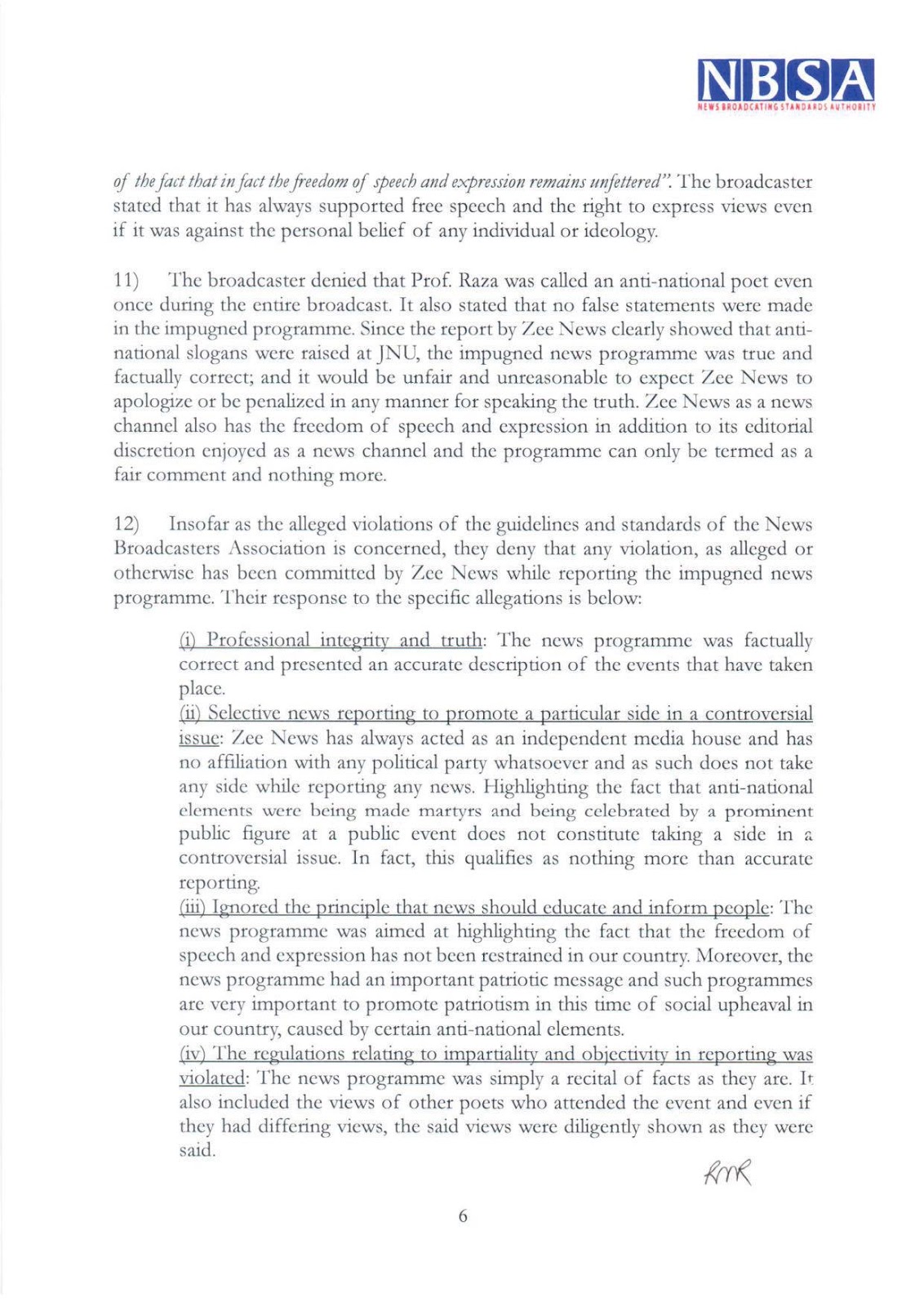 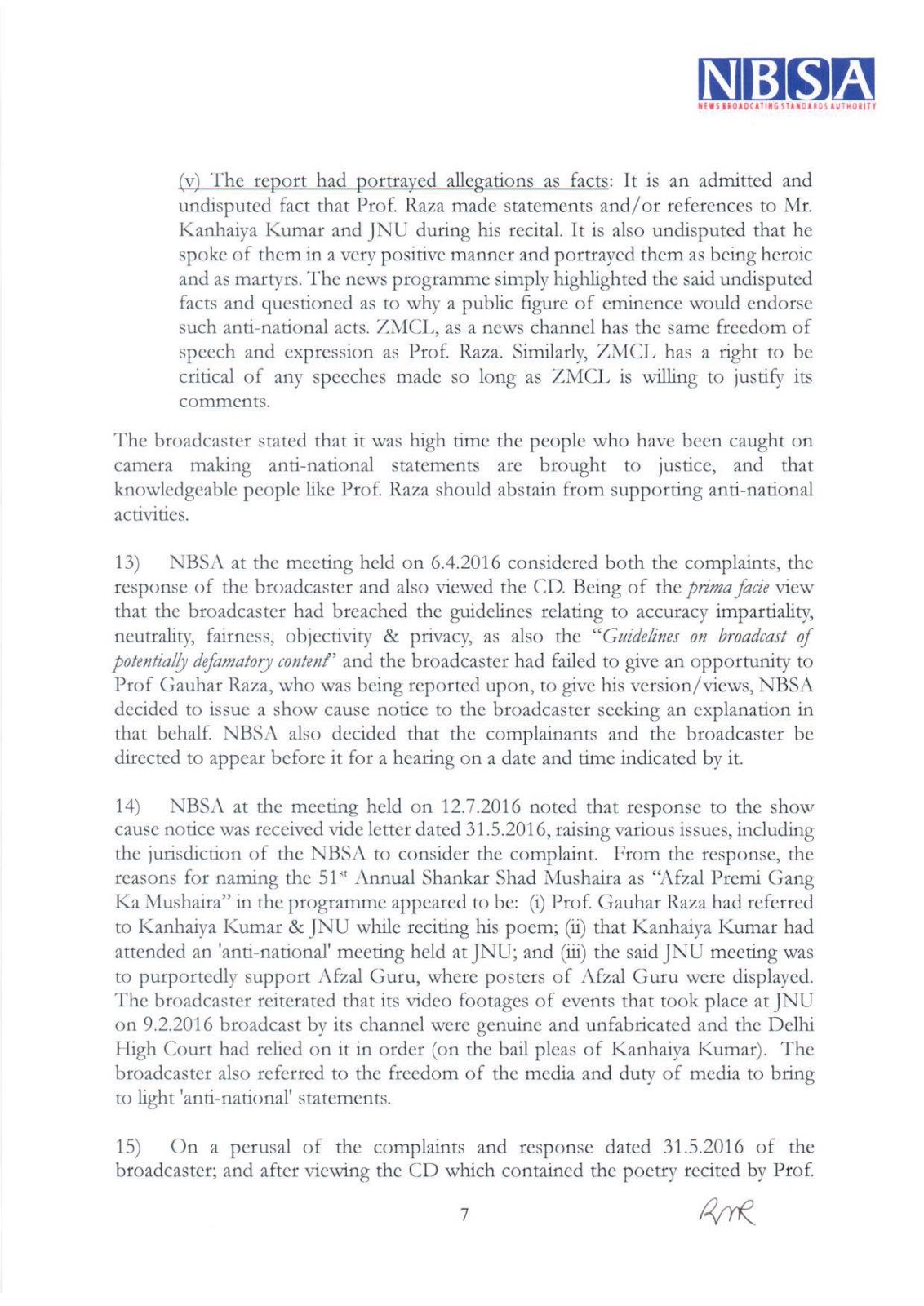 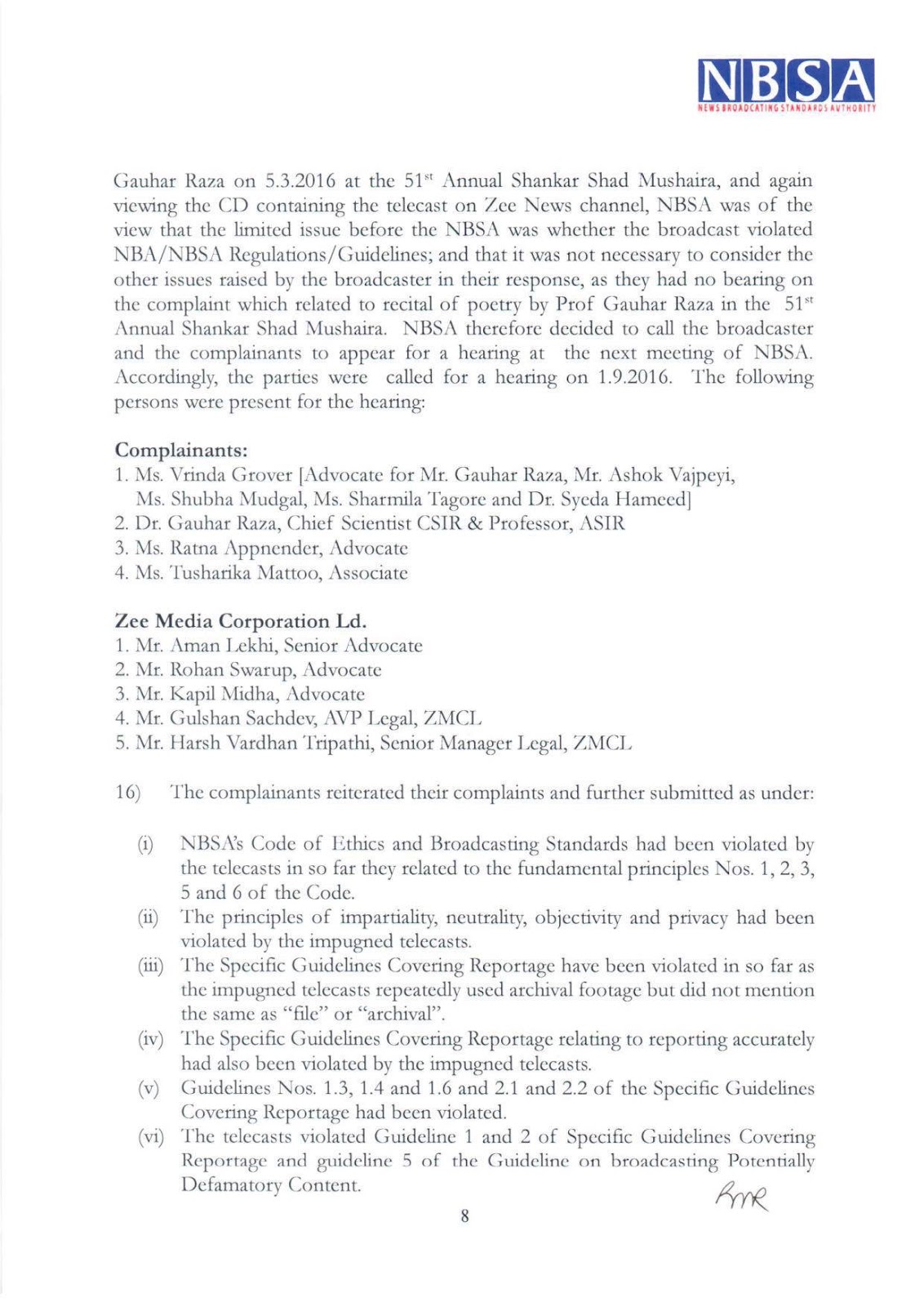 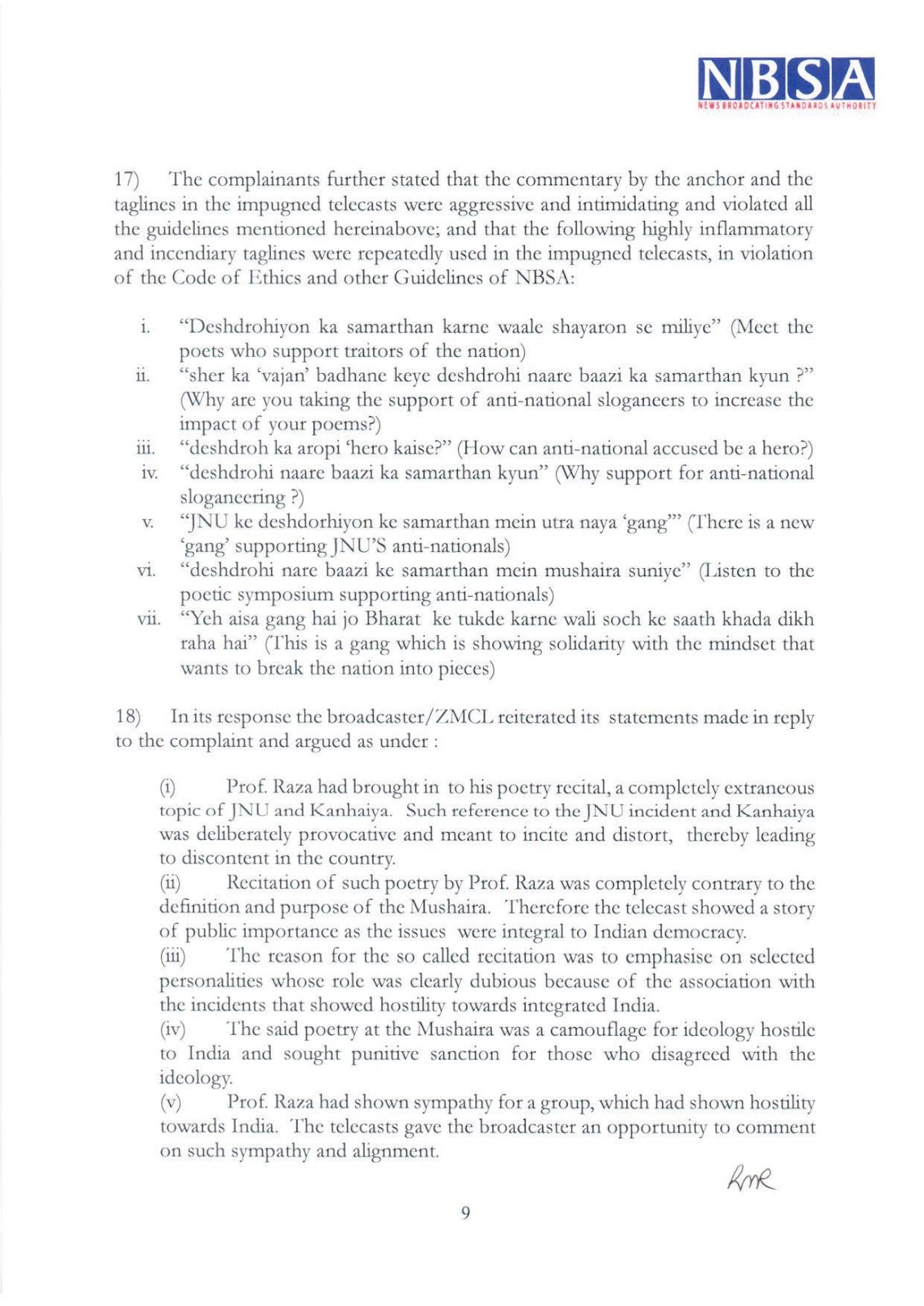 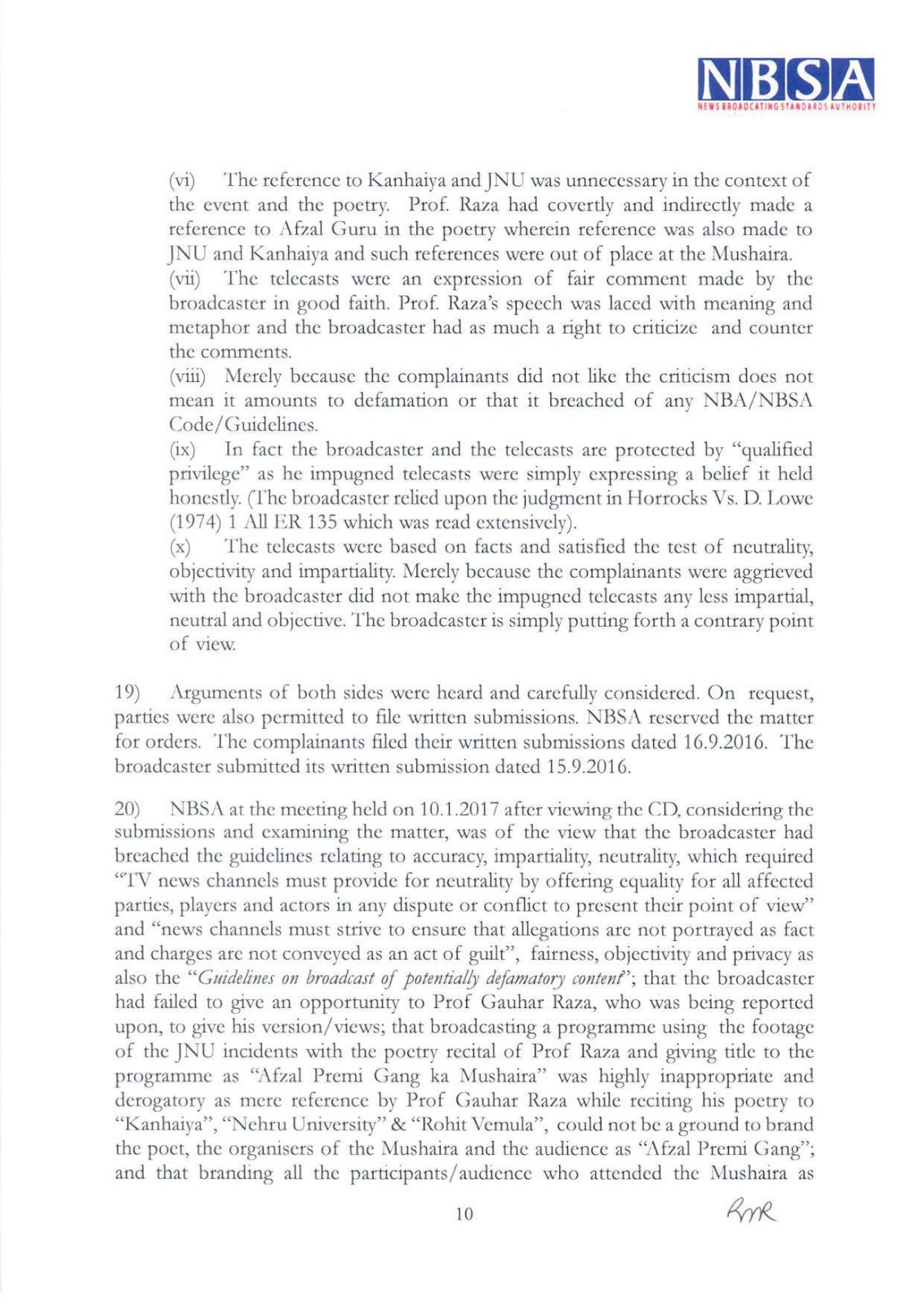 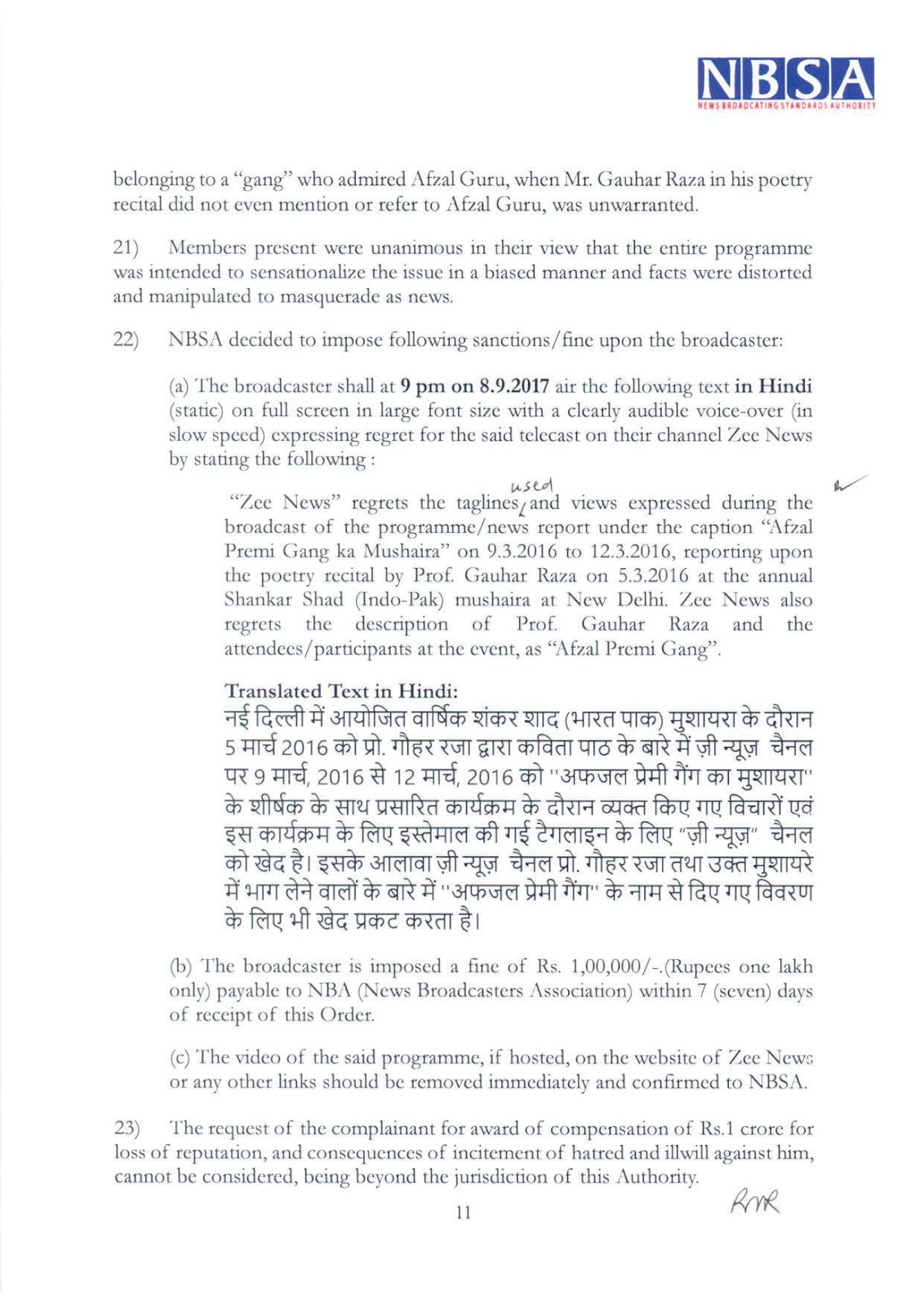 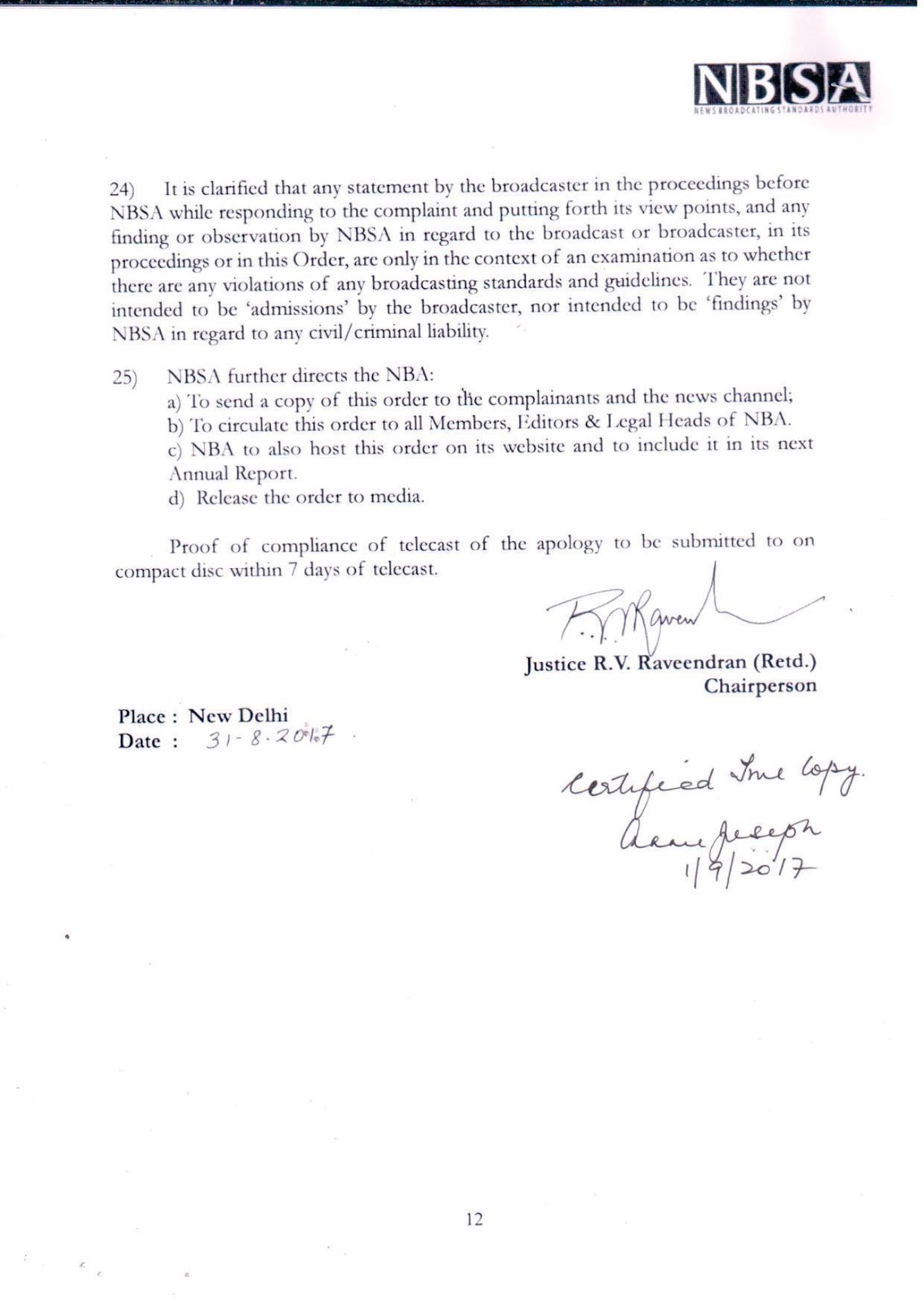