NEW DELHI: Prominent women organisations have penned a letter to the Jawaharlal Nehru University Vice Chancellor M.Jagdesh Kumar warning him against diluting the autonomy of the Gender Sensitisation Committee Against Sexual Harassment (GSCASH) today. Students have been protesting against a notice by the Registrar to put the elections to this body on hold, and substituting it with an Internal Complaints Committee.

The letter points out what the faculty and students of the University have always maintained that GSCASH has been a model institution, and has worked extremely well. 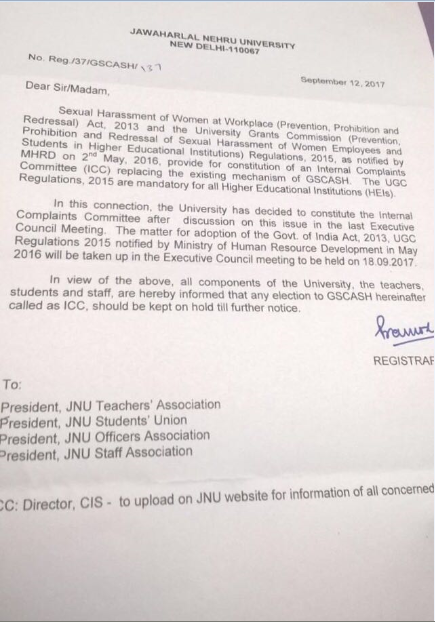 The text of the letter is as follows:

We, the undersigned women’s organisations express strong concern at the reports which indicate that the University administration is making serious and unjustified attempts to dilute and destroy the autonomy of the Gender Sensitization Committee Against Sexual Harassment (GSCASH) in the Jawaharlal Nehru University.

We would like to remind the University administration that the GSCASH has been a model institution and has served as an example to similar institutions in several other universities since its inception in 1999. In this sense it may be noted that the autonomous functioning of the GSCASH has been exemplary in ensuring that the victims of sexual harassment get justice.

However it is regrettable, that in the recent past, the JNU administration has made concerted attempts to erode the independent functioning of GSCASH and violate its norms and rules. This fact is particularly alarming because the administration has approached the Executive Council and tried to get some cases of sexual harassment removed against persons in positions of authority.

Such direct interference has always been resisted by the teachers and students of the University. In the light of such a history of interference the concerted attempt of the University to replace the election of members with the ‘nomination’ of members is a direct attack on the autonomy of the Institution and goes against the spirit of natural justice for victims of sexual harassment.

Today, the University is using the pretext to review and dilute the GSCASH norms and procedures. This disturbing trend is all the more worrisome because the Executive Council that is going to sit on judgement over the report recommending the dilution of GSCASH has members (for example Bidyut Chakravarty of Delhi University who is an external member) who have either been found guilty of sexual harassment themselves or are facing charges of sexual harassment at their own workplace. This is unacceptable to any organisation working for gender justice.

In the light of the above, the all women’s organisations express their solidarity with the protesting students and teachers and requests the Vice Chancellor and all members of the executive council to retract any attempts to dilute and reduce the effectiveness of GSCASH. Any attempt to change the character of the GSCASH will meet with opposition from all sections of society who are concerned about gender justice.