'Police Encounter' Witnessed By 3 Friends of the Victim Who Have Gone Into Hiding, Says Fact Finding Report

NUH: (Editors Note: Below is a statement and report of a fact finding team organised by the Citizens Against Hate, an amorphous group of professionals and activists. The Citizen is reproducing the report of the alleged encounter of a 30 year old man In Nuh District as sent by the organisation of recognised citizens, and has not independently confirmed the details)

In Nuh District of Haryana, a boy from Khadkhadi village - Munfaid @ Chauda s/o Islam - was killed in a police encounter on 16.09.2017.

Munfaid was a 30 year old man, who is survived by his wife and a minor daughter 3 years old. Munfaid belonged to the Meo Community and was engaged in the profession of farming.

The victim’s father has in a written complaint to Police (see Annexure - 1) alleged that in the evening of 15/9/2017, his son called him and his father in law (Khurshid s/o Rehmat) to village Dekadi, PS Nuh. There Munfaid told them that CIA (Central Investigation Agency, Haryana)1 Staff members namely, Vikrant, Shakti Singh, Satish and Siddharth had called him to Rewari to meet them, and told Munfaid that they will close all the false cases registered against him if he does some work for them.

The victim’s father and father- in-law, in order to escape the everyday harassment by the police, advised Munfaid to do whatever the police are asking him to do. Thereafter, on the morning of 16.09.2016, the victim’s father was informed that his son was shot at Kala Pahad ki Ghhati, Tauru Nuh Road at around 2-3 am. In his complaint, the father has alleged that the above named officials have conspired and murdered his son. He went to the Mortuary of Nuh Hospital, where he identified the dead body of his son.

As per official website of CIA (Faridabad police), “Main purpose of partition in these staff is to control specific crime by a specilised staff like anti Bangladeshi staff which arrests illegal immigrants of Bangladesh living in Faridabad & P.O. Bail-Jumper staff arrests P.O. & Bail-Jumper mostly.” Available at: http://faridabad.haryanapolice.gov.in/PoliceUnit_CrimeBranch.htm

However, in a blatant attempt to cover up the incident by the police, the FIR lodged by the Police, is not based on the complaint given by the victim’s father. The FIR is in fact based on the statement given by Inspector Mastana, CIA Staff, Nuh, Haryana.

The FIR bearing No. 0358, dated 16.09.2017, filed at 10.39am, in PS Tauru, District Nuh, u/s 302, 201 IPC and Section 25 Arms Act, 1959, has been filed against unknown accused persons. (See Annexure 2). The FIR states that Inspector Mastana, came across a white pick up truck (registration number of the truck not mentioned in the FIR) in the middle of the road near an abandoned mining Kanta in Tauru Ghhati, where he found an unidentified person grievously injured. The victim was taken to Nalhad Hospital, Nuh, where he was declared dead. It was found that the person was shot in his neck by unknown people. The CIA Staff contacted the police station, and the FIR was thus registered.

The Post Mortem was conducted Shaheed Hasan Khan Mewati Govt Medical College on 16th September, 2017 at around 4:35 PM by a board consisting of three doctors and the post mortem process was videographed.

As per the Post Mortem Report, a reddish contusion was found on the front right side of the chest and firearm entry wounds were found on the front right side of the neck. A deformed metallic bullet of size 1.5x1 cm was found over the right side of second thoracic vertebrae. The PM Report also states that along with the dead body, a black T-Shirt and a red baniyan were received, both of which were cut open from the front. After the Post Mortem, the police were handed over a sealed packet bearing two seals containing the bullet recovered from the body.

The members of the fact finding team met the victim’s father and father-in-law and visited the scene of crime. Some interesting aspects that came up during their interaction with the family have been summarised below:

? The residents of village Rozkemeo informed the fact finding team that Munfaid was accompanied by his three friends when he had gone to meet the police officers, who saw Munfaid being shot by the police. The eye witnesses have informed the residents of the village that the police officers came in a green Bolero Car which stopped right infront of their vehicle. Munfaid who was sitting in a car with his three other friends was shot at by the officers.The three friends, scared for their own life and limb ran away from the spot and informed the villagers about the murder. The residents of the village also informed the fact finding team, that the eye witnesses perceiving a threat to their lives have not yet given a statement to the police and are currently in hiding.

? According to Islam Hussain, the victim’s father, Munfaid was in constant touch with the police officers regarding a false case of rape that had been filed against him. He further stated that Munfaid from time to time, on the instruction of the police officers, used to carry out some work for them. On the eveining of 15th September 2017, the police officers were constantly calling Munfaid, asking him to do some work for them in return for taking out his name from the rape case against him. Khurshid, the father in law of the deceased mentioned the names of Vikrant and Shakti Singh, saying that Munfaid had even given one of them Rs 2000 a few days back to remove his name from the case.

? Islam, Munfaid’s father has alleged that the doctor along with the police officers were trying to tamper with the dead body of Munfaid, with an intention to erase evidence. He saw them tearing the clothes present on Munfaid’s body and trying to remove something from his body. When he objected, he was abused and asked to leave the room.

This is not the only case of police encounter in Nuh. The past few years has seen a surge in cases of extra judicial killings of muslim youths by police in Nuh and Faridabad Districts of Haryana. These are mostly on the suspicion of them being criminals.

A recently published fact finding report called “Lynching Without End”, by Citizens Against Hate, looks at religiously motivated vigilante violence in India. The Report states that a rapid listing of police encounter cases led to the identification of 11 such cases involving 15 deceased, in Nuh district alone. The list of 11 cases of encounters in Nuh District identified in the report ‘Lynching Without End’ has been presented in Annexure - 3.

According to the Police version, Munfaid’s body was found in a white pick up truck in the middle of the road near an abandoned mining kanta in Tauru Ghati. The place is basically on a short stretch of road running along a hill on the way from Nuh to Tauru, just after Shonk village (district Nuh). On reaching the place, we found that the road had been closed off just after Shonk village on the orders of Haryana government for repair and road construction. The people manning the check post there said that no cars were being allowed to go through. On being asked about the site where the incident happened, they said that the location was just a short distance before the other checkpost where the road block ended.

Villagers in Sonkh said that on the night of 15th September a Bolero with police lights had rushed past the village in the direction of the alleged site of the incident just after 12 am. The next morning between 6-7 am a PCR vehicle had also gone in the same direction.

• An FIR should be registered by the police based on the statement given by the deceased’s father.

• The four CIA Staff Members named by the deceased’s father in his statement should be immediately suspended, arrested and along with criminal prosecution, a departmental inquiry should be instituted against them.

• The guidelines laid down by the Hon’ble Supreme Court of India, in People’s Union for Civil Liberties & Anr. Vs. State of Maharashtra & Ors [Criminal Appeal No. 1255 of 1999] for investigation of police encounters should be followed by the police as the standard procedure for thorough, effective and independent investigation.

• The family of the deceased and the three eye witnesses should be immediately provided witness protection.

• The family of the deceased should be provided compensation according to the provisions laid down in CrPC. 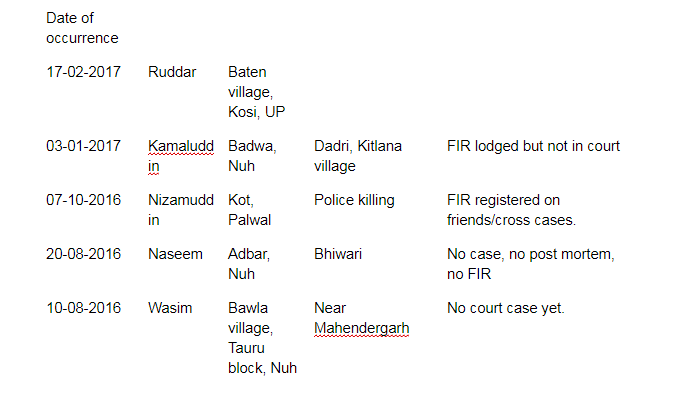 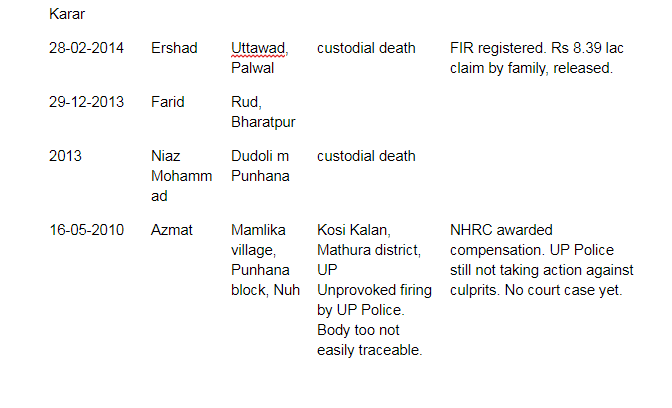