When Women Protest All India Joins In

Universities are a place of freedom, expression and centres of education and filled with young adults who are eager to learn, to test their ideas and skills and who dream of a bright future. But then how does a person learn when they are to busy fearing for their safety?

This past Thursday in Banaras Hindu University, a student was harassed by three men on a motorcycle, while she was returning to her hostel around sunset. They physically abused her and fled when she resisted. She alerted her warden, who with immediate action could have still caught the accused. The brief window of justice closed abruptly when the warden asked her why she was out so late in the first place. The incident was not forwarded to the warden’s superiors. 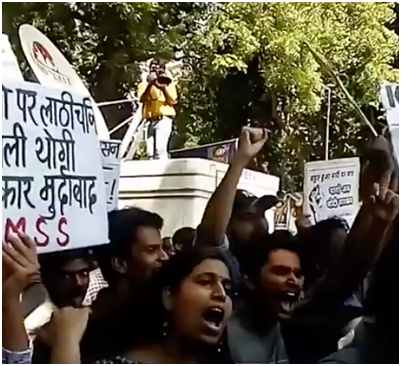 This is not the story of just one girl in just one university. The story is very personal for hundreds of women who gathered around the gates of BHU to protest the system which claims to protect them. It is also holds true for their sisters in other universities who are told to return to their rooms before dark, and are blamed for any problems that might occur outside the hostel after dark.

They are angry. They no longer want ignorance of the authorities on sexual harassment and moral policing on the basis of what they think women should do. The Pinjra Tod movement has been fighting this battle for years as well, against imposed early hostel timings for girls while their male peers have relaxed to no timings.

It is significant that girls have gathered to protest in BHU in such a ratio, and it encourages others to do the same. They refuse to be blamed for the actions of eve teasers, molestors and rapists. Unfortunately, a lathi charge against the crowd has left many of these women bruised with head and back injuries. It seems that nobody wants a woman to have her voice. 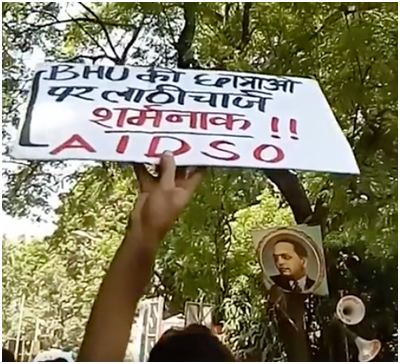 The Superintendent said he had tried talking to the ‘girls’ but their “demands are very weird”. It seems unfathomable that women want rights, respect and safety. The lathi charge opened against them with not a single female constable in attendance, despite the ratio of women.

Students of JNU attended in numbers to show their support and to fight against the dismantling of GSCASH. Dr. Syeda Hameed of Muslim Women’s Forum spoke at the protest and said “Ten years ago when it was established, the GSCASH at JNU was exemplary. The sexual harassment committee formed was an example for the rest of the country. But a decade later, we are seeing the dilution of the committee. The whole point of the Sexual Harassment Act, landmark achievement of National Commission for Women and Justice JS Verma, which mandated this committee, has been lost.”

Muslim Women’s Forum attended for solidarity with the cause and to assert that the issues of Muslim women go beyond just Triple Talaq, polygamy and halala. Our fight is one and the same.

Dr. Hameed ended her speech by saying, “Students should be able to dream.”