It's The Economy Stupid! 3 BJP Die Hards Turn on PM Modi And Jaitley One After The Other

NEW DELHI: Three BJP stalwarts, closest to what passes in the party as intellectuals, have had a drastic change of mind and no longer support Prime Minister Narendra Modi with the passion with which they had first embraced him in 2014. Journalist and author Arun Shourie had set the ball rolling, but was virtually isolated for at least two years in his strong criticism of the party.

In the past three months however, three more seen as fairly tall figures in the centre-right establishment have joined him, very much like skittles falling with slow precision in a bowling alley. The three are senior Supreme Court advocate and Rajya Sabha MP Ram Jethmalani, followed by Modi acolyte Subramanian Swamy and now most recently former Finance Minister Yashwant Sinha. They have all used letters and the media to give vent to their concerns and criticism.

In fact, there are are many commonalities between the three:

-They have all attacked the Modi government on the economy.

-They all speak from within the BJP.

-They have all been Ministers in one or the other BJP governments.

-They are all vocal and often brutal in their assessments and views.

-They have supported PM Modi with some passion, seeing in him a reformist when he first came to power.

-Economy is the common plank for the opposition now.

-They are function as independents, have a good rapport with the media, and are heard when they speak.

- And all are now are speaking with Sinha being the last to break his silence.

Shourie has been giving interviews and writing freely of his differences. He has given lectures, has spoken on television and at meetings and does not mince words. Sample of an interview: “ Yes, I would take it further and say that Modi falls in the category of something called the dark triad [which includes personality traits of Machiavellianism, narcissism and psychopathy] that’s the characterisation I would give him. But he also seems to be falling into what many of these persons do. You see a bully is very easily frightened. Just see what happened as a result of the Delhi elections and the Bihar elections. Modi gave up all talk of “vikas vikas” and immediately he embraced all the populist schemes. It showed how frightened he became just after an electoral defeat. And second, the only purpose is to win elections and for that any means are ok...this intimidation and abuse are one of the instruments.”

Ram Jethmalani fired the first recent salvo with his letter to the PM that he released to the media last month. The first page of the long missive sets the tone and the tenor of his criticism that runs into pages, and places him on the opposing PM Modi who he has criticised mainly for his failure to deal with corruption and black money as promised.Jethmalani had been confident that PM Modi would at the onset tackle this issue better than others in the past. 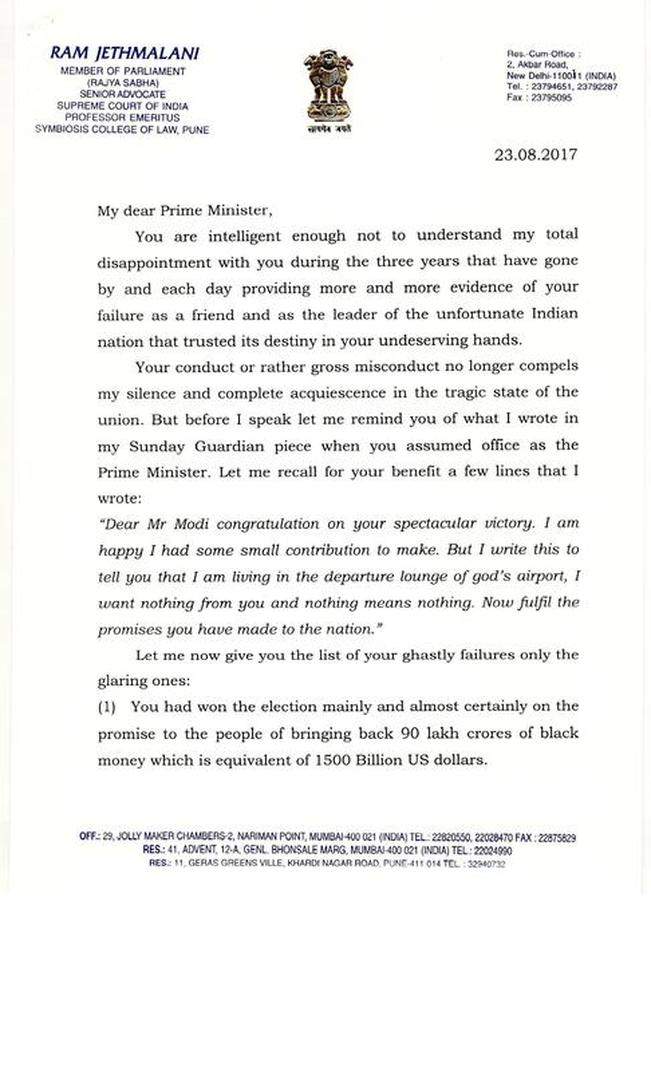 Subramanian Swamy has emerged with a strong criticism of GST. This, despite GST being dear to PM Modi’s heart who announced it in a midnight session of Parliament in a major media-BJP hype. Swamy has struck at the root of the projected economic reforms of the Modi dispensation. And in a series of interviews, backed as he disclosed with a 16 page letter to the Prime Minister he has stated categorically, ‘today, the economy is in a tailspin. Yes, it can crash. We need to do a lot of good things to revive the economy. Even a tailspin can be made to steady. If nothing is done, we are heading for a major depression. There will be mass scale… banks might collapse, factories might start closing.”

Swamy, ironically, is echoing the predictions of Left economists like Prabhat Patnaik who has predicted precisely such a recession, speaking of the adverse impact of demonetisation and GST. Swamy has been particularly critical of GST Swamy told CNN-News18. The BJP MP also revealed that he had written a 16-page letter to PM Modi in May 2016, warning the latter about the state of the economy.

Swamy has also claimed that India’s GDP rate is much lower than government figures. “It is lower than what is being told to you, and it is going to decline,” he said.

And now former Finance Minister Yashwant Sinha has written a lead article in the Indian Express with the title “I need to speak up now” in yet another blistering attack on the economy. He starts with, “I shall be failing in my national duty if I did not speak up even now against the mess the finance minister has made of the economy. I am also convinced that what I am going to say reflects the sentiments of a large number of people in the BJP and elsewhere who are not speaking up out of fear.”

And concludes with the even more devastating, “The prime minister claims that he has seen poverty from close quarters. His finance minister is working over-time to make sure that all Indians also see it from equally close quarters.”

In between somewhere was also RSS ideologue S.Gurumurthy who delivered a speech on “‘Demonetisation -Its role, Impact and Follow-up’ at Chennai. And he said, “I have a feeling we are hitting the bottom now. There is no way this situation can continue.” According to him demonetisation, GST, blackmoney all amounted to “too many disruptions too soon.” And were badly implemented.

Prime Minister Narendra Modi, possibly in response to this scathing criticism from within, has appointed an Economic Advisory Council. One of the first decisions by the Prime Minister after coming to power in 2014 had been to disband this Council functioning under former PM Manmohan Singh. He has not re-appointed it for macro-economic advise, with Member of Niti Aayog Bibek Debroy at the head of the five member Council. Economists are still sceptical about the outcome, and none of the three BJP critics were seen jumping with joy. At least not yet.