BHOPAL: Madhya Pradesh government launched a fresh attack on farmers, this time in Bundelkhand where those protesting against drought were forced to strip down to their underwear and sit for hours in a police station.

The photographs released also by the opposition in MP show the farmers sitting without clothes, and also leaving the police station with their clothes bundled in their arms.

The ruling party in MP insists that the protest was organised by the Congress party, with the farmers submitting a memorandum with a list of demands to the district administration.

When the protest turned violent, the police allegedly used batons, teargas and water cannons. The farmers allege that they were finally detained at the police station, beaten up and forced to strip. Thousands of farmers had joined the protest and according to the state Congress, when they started leaving for their homes a tractor trolley was allegedly intercepted by the police from Dehat thana, with the formers stripped and beaten. 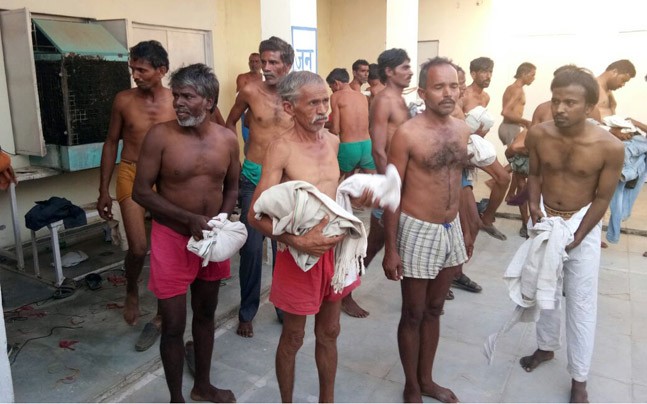 Although The Citizen could not get independent confirmation of the beating, there are sufficient photographs to prove the humiliating treatment meted out to them by the cops who made them strip and sit for hours. Local farmer leaders said that the state government was anti-farmer and this attack by the cops after Mandsaur where at least five farmers had been killed merely strengthened this perception. The Congress alleged that the farmers were humiliated and assaulted; the party has vowed to take the case to the state human rights body with photographs and other evidence. The police claimed their men were injured in stone throwing by the farmers.

Chief Minister Shivraj Singh Chouhan said his government "cannot tolerate violent protests" and accused the Congress of trying to stir trouble. "The Congress unnecessarily created a situation in which lathis and stones were used and vitiated the atmosphere," he told reporters. On the stripping charge, he said he had asked for a report. State home minister Bhupendra Singh said he had asked the police chief to investigate whether the farmers were forced to strip or they did it voluntarily.

"It was a congress campaign and there was stone-throwing. We have heard about the stripping, we are waiting for an inquiry report. We need to know whether the allegation is political and whether the police disrobed them or the farmers stripped in protest," he added.

Farmers in drought hit Bundelkhand have lost their crops and have been demanding loan waivers and some compensation. In Mandsaur the farmers were fired upon, with five being killed. At least one tenth of the farmers suicides in the past 16 years in this state have taken place in just one year February 2016-February 2017---nearly 2000 farmers according to official figures--- where agriculture growth has stagnated dramatically.

The state government under Chouhan has claimed national agriculture awards, but has not met the demands for compensation and loan waivers being raised by protesting farmers. As many of them have said to local reporters, “we have nothing left, and nothing now to lose except our lives.” In Mandsaur the irony was a bumper onion crop with no buyers, with the government refusing to intervene even when the farmers were being forced to sell onion at just about Re 1 per kilo. The same had happened with tomato and potato crops, with the farmers incurring heavy losses.

The stripping comes after police firing. The state government tried to placate sentiments after the Mandsaur incident, but clearly little has been done on the ground. Farmers protests, that do not make media headlines despite the distress and the intensity, continue with the Madhya Pradesh government still hostile as the recent incident indicates.