Project Inauguration Delayed: Adani Group Responds To Coal Mine Protests In Australia With A Loud Video

NEW DELHI: The Adani group has been the focus of a public campaign in Australia, with people coming out in protest against Adani Mining’s $16.5 billion investment in the proposed Carmichael coal mine.

The project has drawn immense controversy leading to a widespread ‘Stop Adani’ campaign in Australia that disputes the claimed economic benefits, financial viability, and environmental impact. Broadly, these have been described as the mine’s potential impact upon the Great Barrier Reef, groundwater at its site and its carbon emissions. The issue has snowballed into a major political controversy in Australia, and while most political parties there defend the project, public criticism has become increasingly vocal.

As the movement against the mine gains momentum, the Adani group is clearly taking note. The group posted a video titled ‘Truth About Adani's Abbot Point Coal Terminal’ to its Facebook page a few days ago, through which it directly addressed the allegations levelled against it -- albeit in a very unconventional way.

The video is entirely composed of flashing text, accompanied by fast and upbeat music. The word “Lies” is repeatedly thrown at the viewer, with the video putting forth “allegations” followed by attempts to set the record straight. The video also misspells “Abott Point” (correct spelling is Abbot Point) -- its coal terminal.

The video ends with the instruction “support progress in Australia” and while it does not detail the environmental impact of the project, it does try to defend the Adani group’s financial record.

The video is accompanied by an equally bizarre long post that states that “trying to stall pro-job developmental projects to further their own hidden anti-development agenda is a sad but true picture of these so called activists and their funding organisations. These ‘anti-development’ ‘anti-job’ campaigns affect job creation and the economic growth story of a nation. Some of them are spreading #Whitelies and misleading people in Australia and India to defame Adani's image besides sabotaging the progressive growth of Regional Queensland in particular and Australia in general, to be brought by Carmichael Coal mine. The entire baseless accusation on Adani is based on just one screenshot of random text with no mention of its origins or reference. Time to see facts and hear the truth. These allegations about Abbot Point Coal Terminal viability and Adani Group finances are absolutely baseless and far from the facts.”

Of course, the protest and accusations levelled at Adani are most certainly not “based on just one screenshot of random text.” An extensive coverage of the criticism and allegations levelled at the Adani group appeared in ABC’s Four Corners programme, wherein the Institute for Energy Economics and Financial Analysis made the claim that Adani’s ventures were largely unprofitable, and the group needed the Carmichael mine to bail itself out. 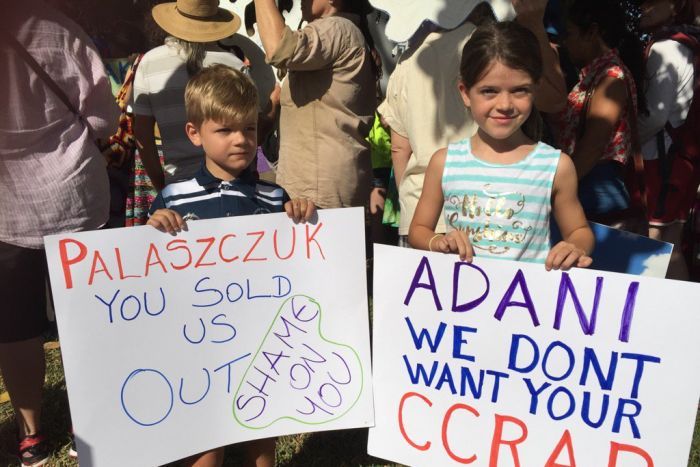 The institute has also published a detailed report which said that the Adani group’s push to develop the Carmichael mine was a desperate attempt to save its unprofitable and debt-ridden Abbot Point coal terminal.

The report also detailed the allegations of financial and environmental crimes committed by the Adani Group and its senior executives.

Additionally, the report accuses the Adani group of tax evasion, using a leaked investigation from the Indian directorate of revenue intelligence. The report can be seen here.

The Guardian has published a detailed article that refutes the points made by the Adani group’s video. It notes that despite the video’s claim that “the Abbot Point Coal Terminal has consistently delivered 100% of supply-driven throughout and is not a low utilisation of Asset,” government data from the North Queensland Bulk Ports Corporation – collated in the Ieefa report – shows the port has averaged just over 50% utilisation since the beginning of 2015. 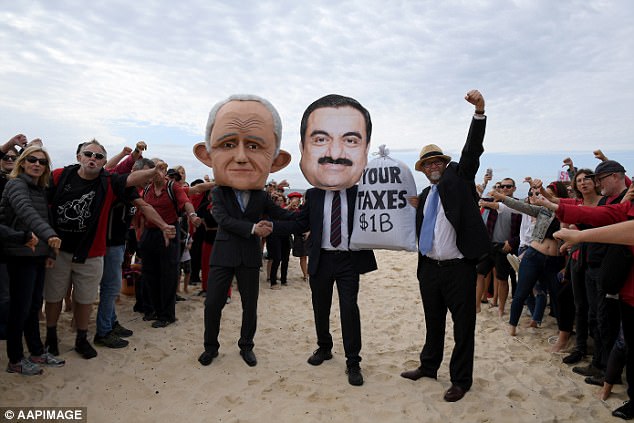 Further, the advertisement attacks the idea that Abbot Point is unprofitable by making an unusual claim: “The capital structure of Abbot point is rated by rating agencies and has investment grade rating from S&P (BBB-),” it says. However, BBB- is the lowest investment grade rating, below which assets become known as “junk bonds”.

Perhaps not surprisingly, Four Corners journalists who had traveled to India for the story were questioned by Gujarat’s police. Four Corners reporter Stephen Long said that he had been in Mundra, in Adani’s home state in Gujarat for less than 24 hours when the police turned up at the crew’s hotel. He said that their main concern was to safeguard the interviews and footage they had filmed on the story they were investigating.

Long said, “We were questioned on and off for about five hours, the senior policeman kept on going outside and talking to someone on his mobile, and whenever he’d return the questioning, the hostility, would ramp up.” “It was obvious they knew why we were there but everybody was avoiding the ‘A’ word: Adani.”, he added.

The Four Corners story can be viewed here.

The allegations levelled at the Adani group and the seemingly desperate video response are indicative of the scale of protest engulfing the group’s proposed mining project in Australia. In a widely reported incident, Annastacia Palaszczuk -- head of government of Queensland -- was accosted by a group of Australians as she walked out of Bhuj airport in Gujarat in March this year.

Palaszczuk was in Gujarat to visit the Adani group’s Mudra port in an attempt to reaffirm commitment for the Carmichael mine project. Before she could get into the car that was waiting for her at the airport, four angry Australians confronted her -- expressing their opposition to the mine. They argued that the project would cause irreparable damage to the Great Barrier Reef.

The activists had travelled all the way to Ahmedabad to hand deliver a letter directly to Gautam Adani at the group’s headquarters. The meeting -- unsurprisingly -- never took place, but the letter gained widespread media attention as it was signed by 91 distinguished Australians, including cricketers Ian and Greg Chappell.

The letter stated that “the Carmichael mine would be the biggest coal mine ever dug in Australia. Once its coal is burnt, it will contribute more climate-changing pollution to the atmosphere than the entire country of New Zealand does every year.

Last year record-breaking ocean temperatures triggered a devastating coral bleaching event on the Great Barrier Reef – a natural wonder that visitors from every nation love… coal is a killer. Coal is the biggest single cause of air pollution in Australia… this mine proposal does not have wide public support in Australia and does not have the support of the Traditional Owners of the land where the mine would be dug.”

Additionally, activists pointed out that the project could contaminate the groundwater farmers in the region rely upon. Coal mining is one of the most water-intensive methods of generating electricity. About 200 litres of freshwater is used for each tonne of coal produced.

A few weeks after the letter was made public, Australian Greens party announced a coalition of environmental groups that were coming together to protest the mine. The objective was evident in the name, “Stop Adani” and the movement quickly gained momentum.

The Carmichael mine project was to be launched last week, with Deputy Prime Minister Barnaby Joyce due to attend, but the ceremony was cancelled because of rain -- or so said an Adani spokesperson.