Yogi Adityanath Turns UP Into a State of Encounters: 433 Encounters In 6 Months

NEW DELHI: India, no alien to police brutality, has witnessed a major rise in police ‘encounters’ in its most populated state - Uttar Pradesh.

The meaning of Encounters According to Human Rights Watch(2009), the term ‘encounter’ refers to a specific type of police conduct — a spontaneous, unplanned “shootout” between the police and alleged criminals, in which criminals is usually killed, with few or no police injuries. The term is widely used in Indian media, public, courts etc because of its widespread practice by governments and police for allegedly curbing crime. However, as investigative media reports have revealed with many cases being tried in courts, it is known that many encounters in India are staged(fake) by the police and the state.

The Rise of Encounters in UP: Yogi Adityanath, the chief minister of UP, won the recent state election(2017) on the mandate of curbing the rising crime rate in the state. His declared policy is focused on implementing a zero tolerance stand where police forces are given full autonomy to use any means necessary to achieve a lower crime rate. This has led to a rise in encounters to a level of 433 in the past six months in which 19 criminals have been killed with 89 other injured and 98 officers wounded, with one death of a Sub Inspector Jai Prakash Singh.

The rise in encounters is taken by the ruling party of the state as one of their achievements in the past six months: 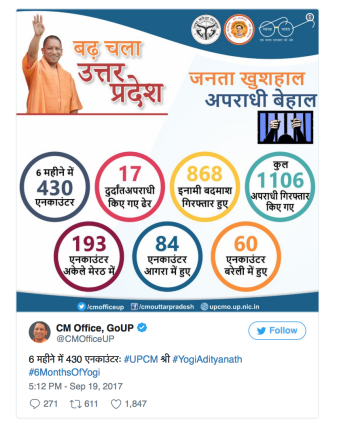 The chief minister has advocated stands like - "Goliyon ka jawab goliyon se hi denge (We will counter bullet with bullets).” and "Agar apradh karenge toh thok diye jayenge (if they commit crime, we will knock them down) to stress his position in using any means necessary to achieve a lower crime rate in the state.

His stand is reflected on the police force of the state where people like Rahul Shrivastav, Additional Superintendent of Police and public relations officer at the state police headquarters, tweeted the following when announcing the encounter death of Sushil Kumar, an alleged fugitive, near Lucknow: 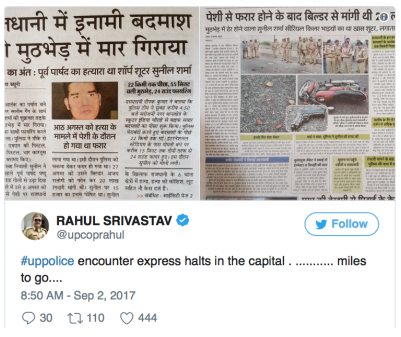 According to NDTV, the police is incentivised by the state to conduct encounters by rewarding the team who carries out an encounter with Rs 1 lakh.

Anand Kumar, ADG Law and Order, said the police action has rattled criminals. The encounters were conducted in the interest of society as per the “desires of the government, expectations of public and according to the constitutional and legal power accorded to the police,”

Inspector general (law and order) Hari Ram Sharma told the Indian Express - ““Police is accountable to the executive, judiciary, media and people. Every encounter is probed through a magisterial inquiry. The National Human Rights Commission has been informed about the deaths,” Here, the magisterial inquiry process is followed by the 16 guidelines issued by the Supreme Court in People’s Union for Civil Liberties & An V. State of Maharashtra.

The Idea of Encounters to curb crime It is evident from the aforementioned details that the idea of ‘encounters’ has become a state of normalisation by the UP chief minister. The police force also consider this procedure necessary and a way of curbing crime. The question arises — why the state has to act in such a draconian way to reduce crime?

According to research done in the field of criminal sciences, it is found that due to the ineffective Criminal Justice System of India(multiple delays in courts and buying out the defendant), the police prefer to take law into its own hand. Public pressure also plays an important role in making the police find innovative ways — read encounters— to reduce criminal activities in a short span of time. This is normally to win the support of the people by political parties.

These reasons not only point to the failure of the justice system but also reshapes the image of the police force, where encounters are encouraged without a thought for rights and the law.. As an anonymous police office said to a BBC reporter, "Well, encounters only gave some brownie points to the cops, but failed to give any credible testimonial to the government. In fact, encounters led to undermining the law of the land.”

Violence is being legitimised as an instrument of the State to eliminate crime.

Opposition party(BSP) leader Mayawati has claimed that the encounters are sectarian. Giving a breakdown of 19 encounters by the police she said, of these eight were Muslims, two Yadavs and two Dalits. This does not help the image of the ruling party which has been accused consistently in the past on taking a hardline against the minorities and the weaker castes.

A Defunct System? Rise in encounters is not a new phenomena in India, as it was widely practised in Mumbai in the1990s again to “curb crime”.There were reports of staged encounters, with the accused being killed by the police without even carrying arms, or fighting back. The same menace has taken over UP, alarming as the state has normalised the idea of encounters in public perception and incentivised the police force to carry these out in increasing numbers.

Rights groups insist that the numbers are far higher than the 433 given out by the government but are still in the process of collating evidence.