Hadiya Does Not Crack Under Pressure, SC To Hear Her on Nov 27

NEW DELHI: The Supreme Court has decided to hold an open hearing, open to members of the public, on November 27 in what is now popularly known as the Hadiya case stating that her consent in this was “prime.”

The apex court examined the Kerala case where the young girl, Akhila Ashokan, changed her name to Hadiya to marry a Muslim man of her choice Shafin Jehan, and directed her father to ensure her presence in court on the said date.

The apex court that examined the case today has in effect left the 24 year old girl in the custody of her father for almost another month. This after she has, in a video taken by activist Rahul Easwar, spoken of a threat to her life.

"Get me out of here. Today or tomorrow, I am going to die. I am sure about this. My father is getting angry, I can make out. He pushes me," she has said in the video that Easwar has since submitted before the National Commission of Women and has also spoken of giving it in to the court.

This was taken just last week indicating that both Hadiya and her husband our facing up to the full weight of not just her family but the state with India’s top counter terror agency, the National Investigation Agency in charge of this case.

Hadiya’s father Ashokan KM claimed that Hadiya’s husband was part of Islamic State, and running a recruitment agency for the terrorist outfit. The Kerala High Court ruled against the young couple directing Hadiya to return to her family. Her husband has subsequently filed an appeal, with the apex court now deferring the case to November 27 for an open hearing. Ironically the Supreme Court gave the sanction to NIA in August to determine whether the marriage was part of the alleged pattern with Muslim men luring women of other religions into the IS.

Ashokan has denied his daughter's allegations of there being a threat to her life. Easwar who met her and recorded the video is of the view that her voice should be heard in this case. 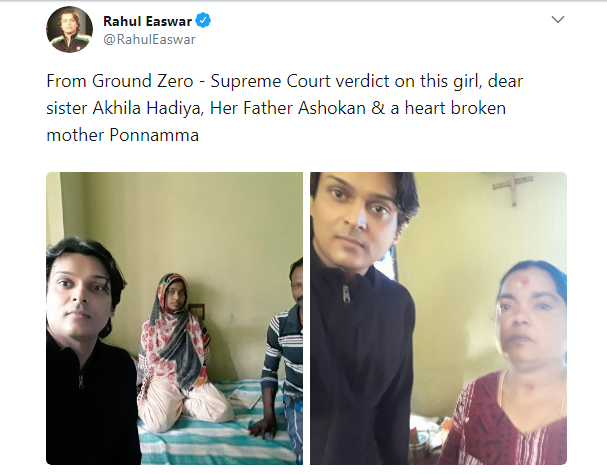