Pidi Becomes A Star! Trends on Twitter, Makes it to BBC

NEW DELHI: Little Pidi (stress added) has now the distinction of being the most trolled dog in India, indeed the world. Ever since she came to the rescue of her friend and Congress vice president Rahul Gandhi she has been trolled, attacked along with him of course, for just being who she is---a happy dog who likes her treats.

“Ppl been asking who tweets for this guy..I’m coming clean..it’s me..Pidi..I’m way (emoji) than him. Look what I can do with a tweet..oops..treat!” is all Pidi said in the video released by Rahul Gandhi’s official Twitter handle and she has become a celebrity.

She was only answering a question that was all over the social media: Who is responsible for Rahul Gandhi’s new makeover? So she said “I am” which is probably true as even the moron knows that dogs do inspire creativity, and psychologists often recommend dog therapy for children and even ageing adults. So Pidi took the credit, in what was perhaps humour for Rahul Gandhi, but serious for her.

Fortunately she is not aware of the storm she has created, and continues to live in a simple world, happy and free, unaware of the trolls who have ripped into her and her friend, wagging her little tail, and smiling through the viciousness. Even as serious adults debate over the tweet, hurl abuse at Rahul Gandhi, and wonder at a humour that they clearly do not understand.

The trolls continue attacking Pidi along with her master----that is certainly not fair---with Assam Health and Education minister Hemant Biswas Sarma who had left the Congress for richer pastures in 2015 tweeting, “Sir @OfficeOfRG, who knows him better than me. Still remember you busy feeding biscuits 2 him while we wanted to discuss urgent Assam’s issues”.

And Union Minister of state for Home Kiren Rijiju responded to his colleague with, ““Many Congress(I) leaders also have similar stories but @himantabiswa ji had the spunk to point out & walk out”.

Pidi does not mind being the dog responsible for the exit of Sarma and others. Although the now BJP leader’s problems had been with the Assam Chief Minister Tarun Gogoi who had a good rapport with the central leadership, and probably if Pidi could speak then she would woof out a loud “unfair” for being blamed for a political.

But for those with a sense of humour, and the social media reflects this, Pidi has very effectively laid the speculation to rest. The trolls have moved from Rahul Gandhi’s supposed makeover to Pidi, and being a loyalist clearly she can settle back with a sense of the task being well done. She has joined her master on the social media, and she draws comfort from the fact that he is no longer alone.

As one tweet puts it, “Did a lot of research & convinced that BJP is the only political party in the world that has ever trolled the pet dog of a political opponent.”

And another declares, “Makes it to BBC! Meet Pidi. The political dog inning Twitter in India.”

No question of it, stardom is Pidi’s.

One wonders why South Asia has this beef with political dogs. Former Pakistan President General Pervez Musharraf’s two dogs were perhaps as famous as him all over Pakistan when he assumed political office. While in the Army his dogs led fairly innocuous lives but after he became President they became famous! The conservatives attacked Musharraf for keeping dogs, for being a non-believer, with the attack spiking after photographs of him carrying his dog in his arms appeared in the newspapers. 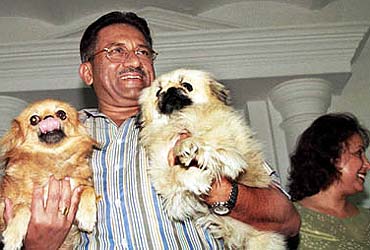 It was intended to portray a happy, casual military man without the shackles of the uniform but it had the fundamentalists up in arms questioning a Muslim for carrying dogs that have been dubbed as ‘impure’ leading many a political opponent in Pakistan to question him and his politics. The dogs soon disappeared from view with politics bringing it home to Musharraf that life as Pakistan’s President required photographs without his two little companions.