'From Separate Struggles, We Are Today a Mass Movement for Dissent in University Campuses Across India'

NEW DELHI: The Citizen embarked on a journey three years ago to restore dissent in an increasingly servile journalistic world, and raise the flags that should define the fourth pillar. Independence, courage, honesty, irreverence that come easily to mind are getting lost with an increasingly corporatised and compromised big media speaking for the rich and powerful, and factoring out the poor and the marginalised.

During this journey The Citizen has evolved, turning from a small enterprise into a large organisation in terms of readers and contributors. This has been done with no funds at all, except help from Citizens like you in different ways. We can report with some pride today that despite the problems, and believe us there have been many because of a lack of funds, The Citizen has not compromised on its independence and boldness. 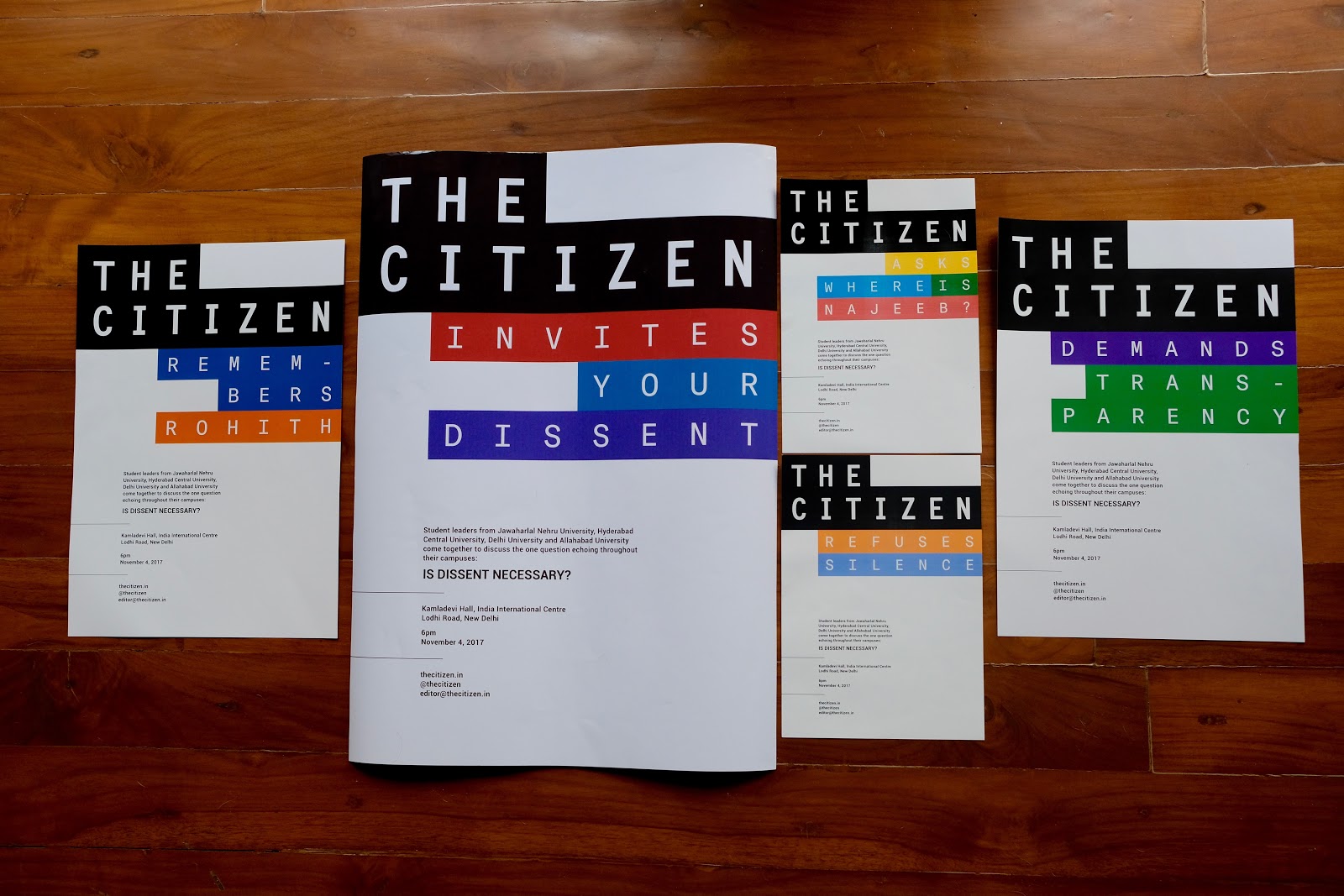 (Posters for the event) 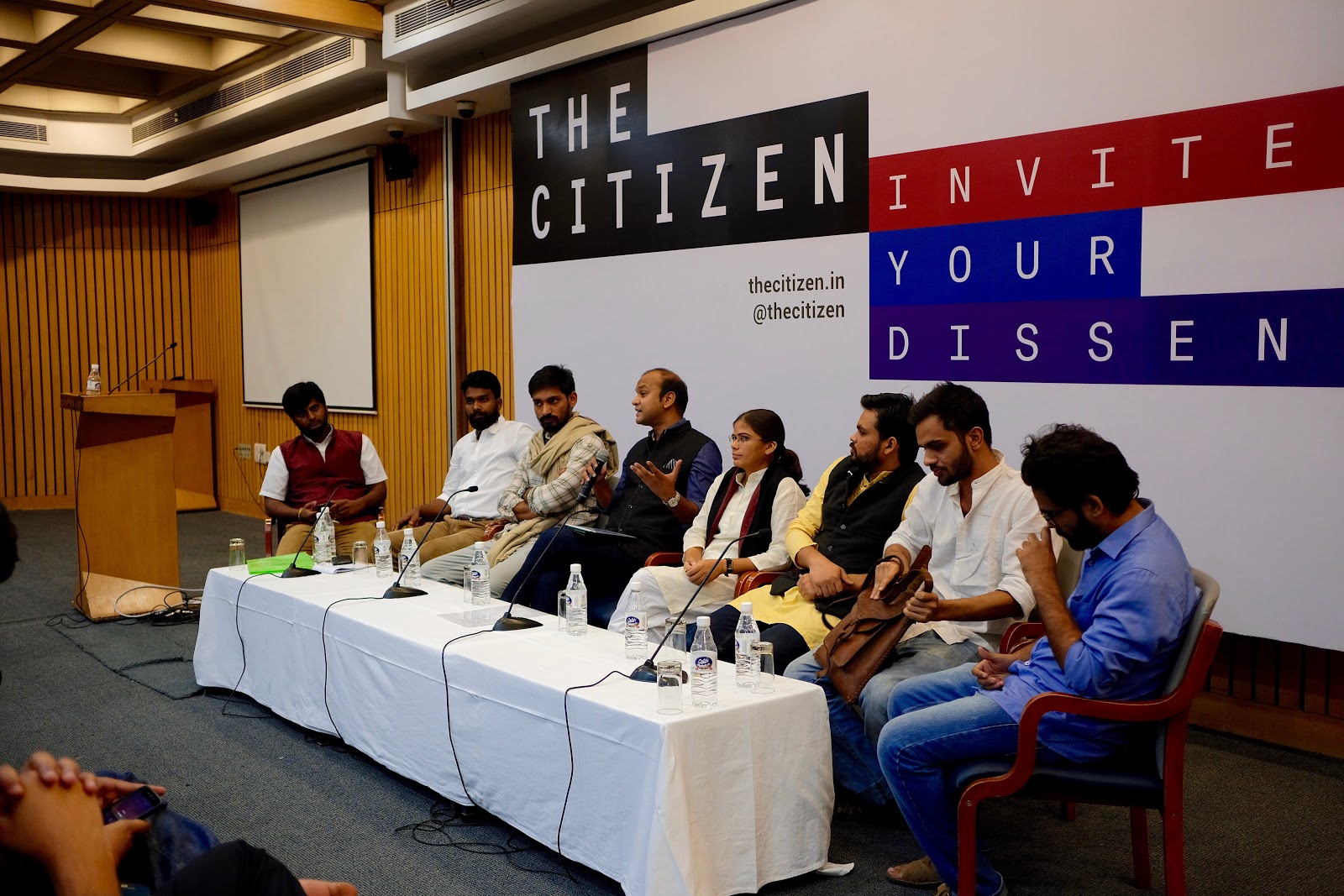 (The panelists at the event. The panelists are: Sreerag Parayil and Dontha Prashanth of HCU, Richa Singh of Allahabad University, Shubhanshu Singh, Pradeep Narwal, and Umar Khalid of JNU, and Amber Fatmi of Jamia Millia Islamia)

We have also taken a decision that The Citizen will NOT take grants of any kind, or investments from the corporates. We know from experience that there is nothing like free corporate money, and the funds being made available today will extract a price tomorrow. Instead we have worked out a new revenue model with you at the Centre. In that we will only accept money from YOU and hope you will contribute generously.We have started a Sport Page and a Hindi section that we are all very excited about. 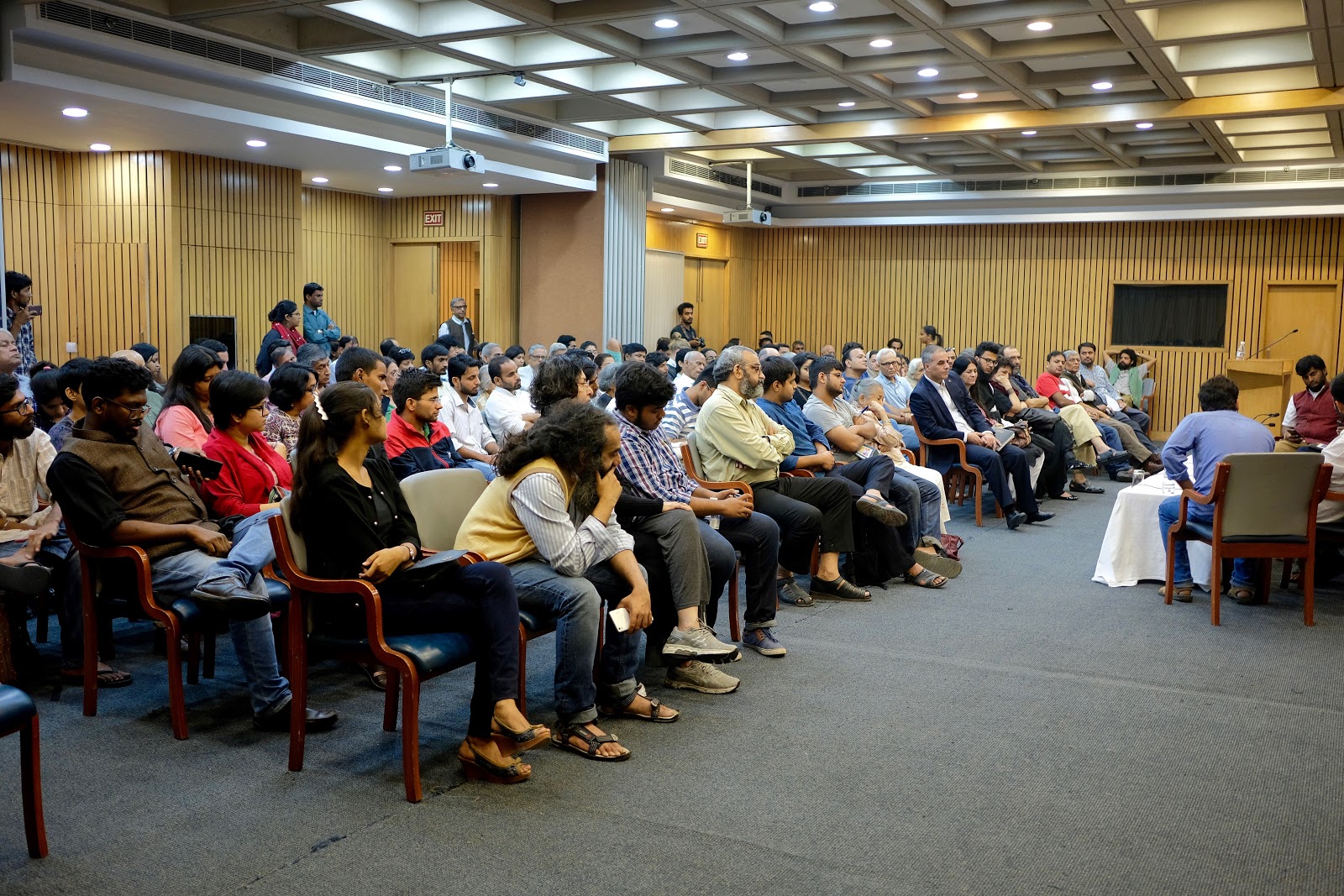 (Packed hall at the IIC) 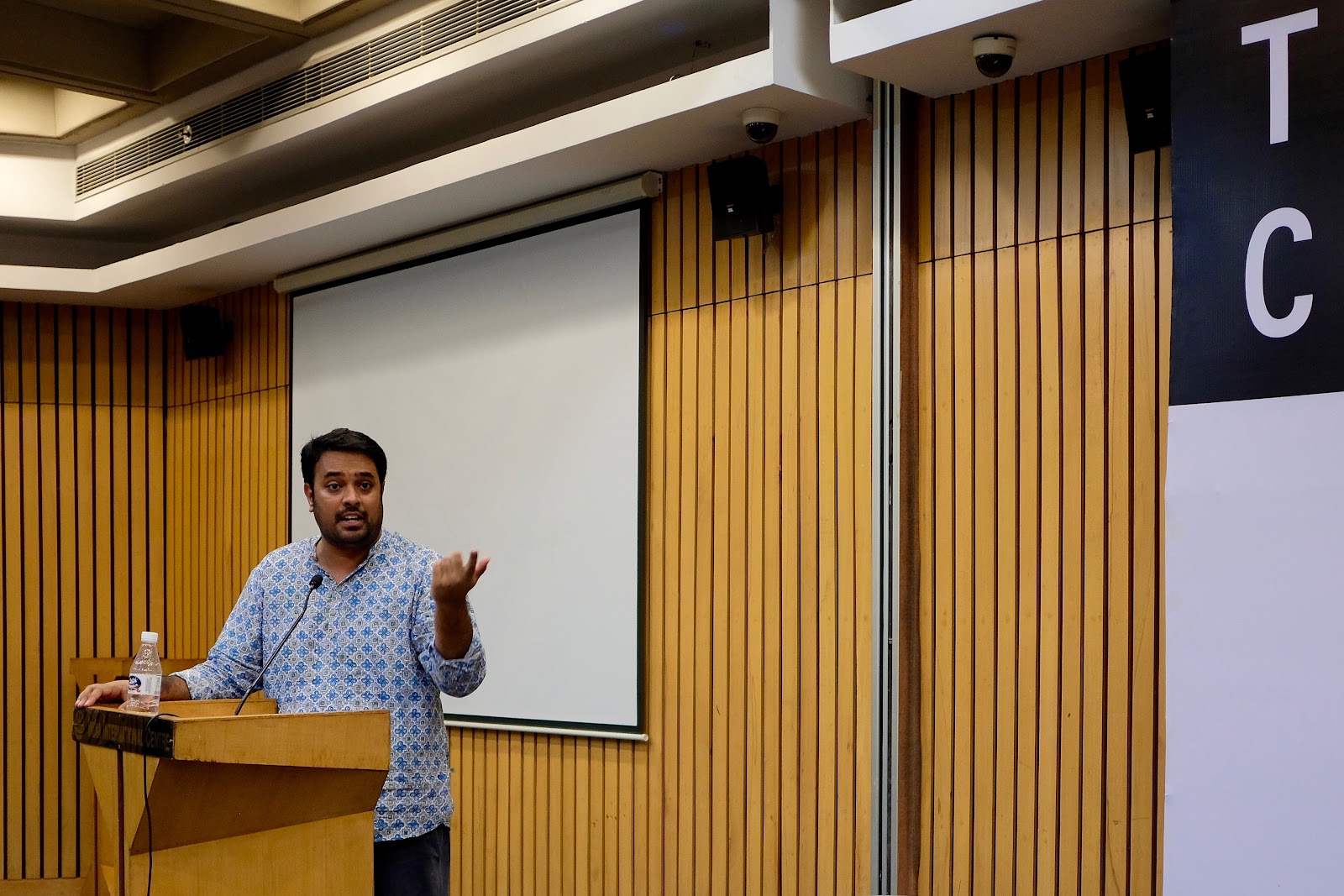 To launch the new site, the new pages, we could not think of a better event than a discussion on Dissent with student leaders who have fought hard battles, and are still fighting to ensure that university campuses across India do not lose this space despite the full effort of the ruling establishment. And that the atmosphere of debate, dissent is encouraged to ensure a vigorous and healthy pursuit of academics. 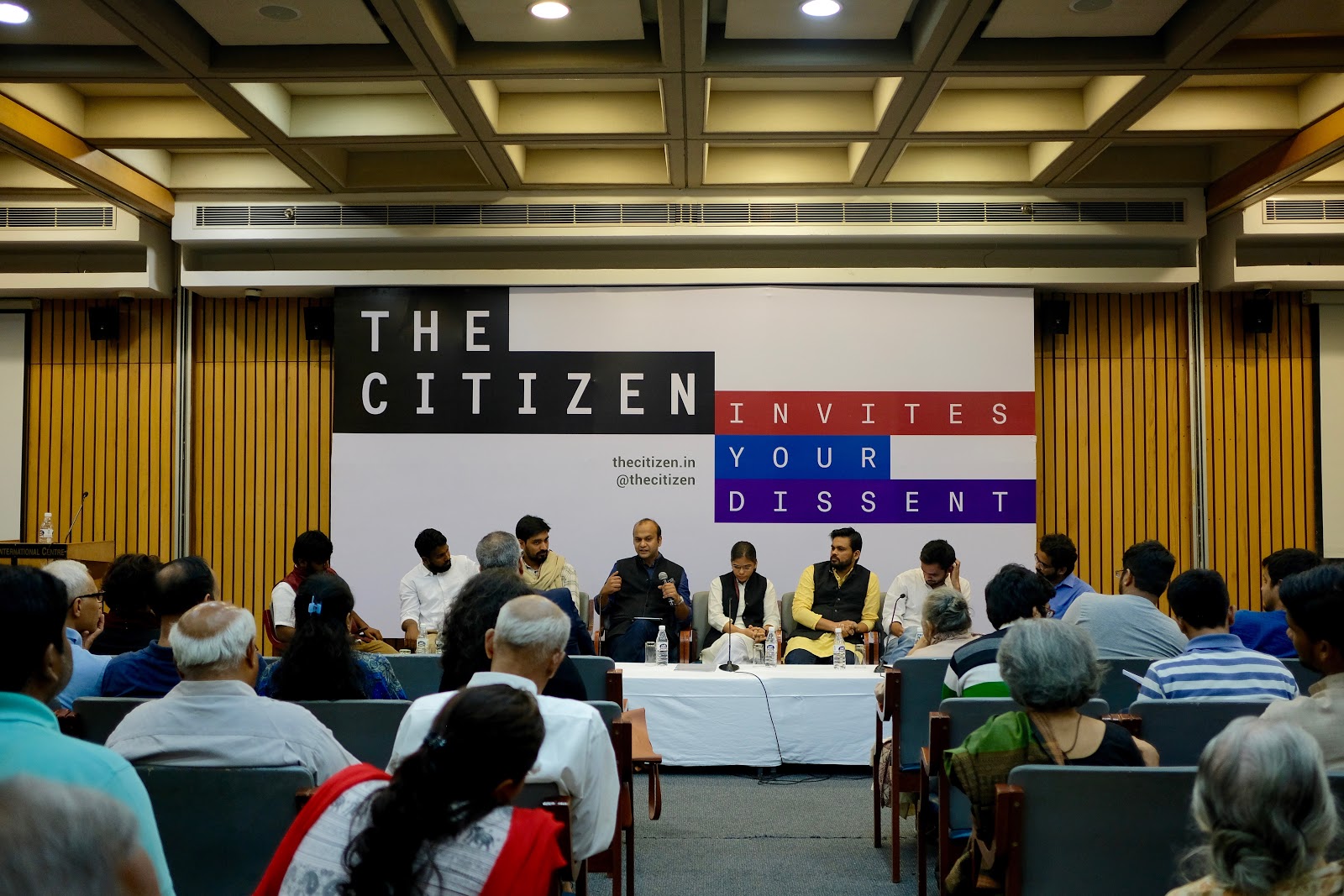 (The panelists in discussion with moderator Ishan Russell) 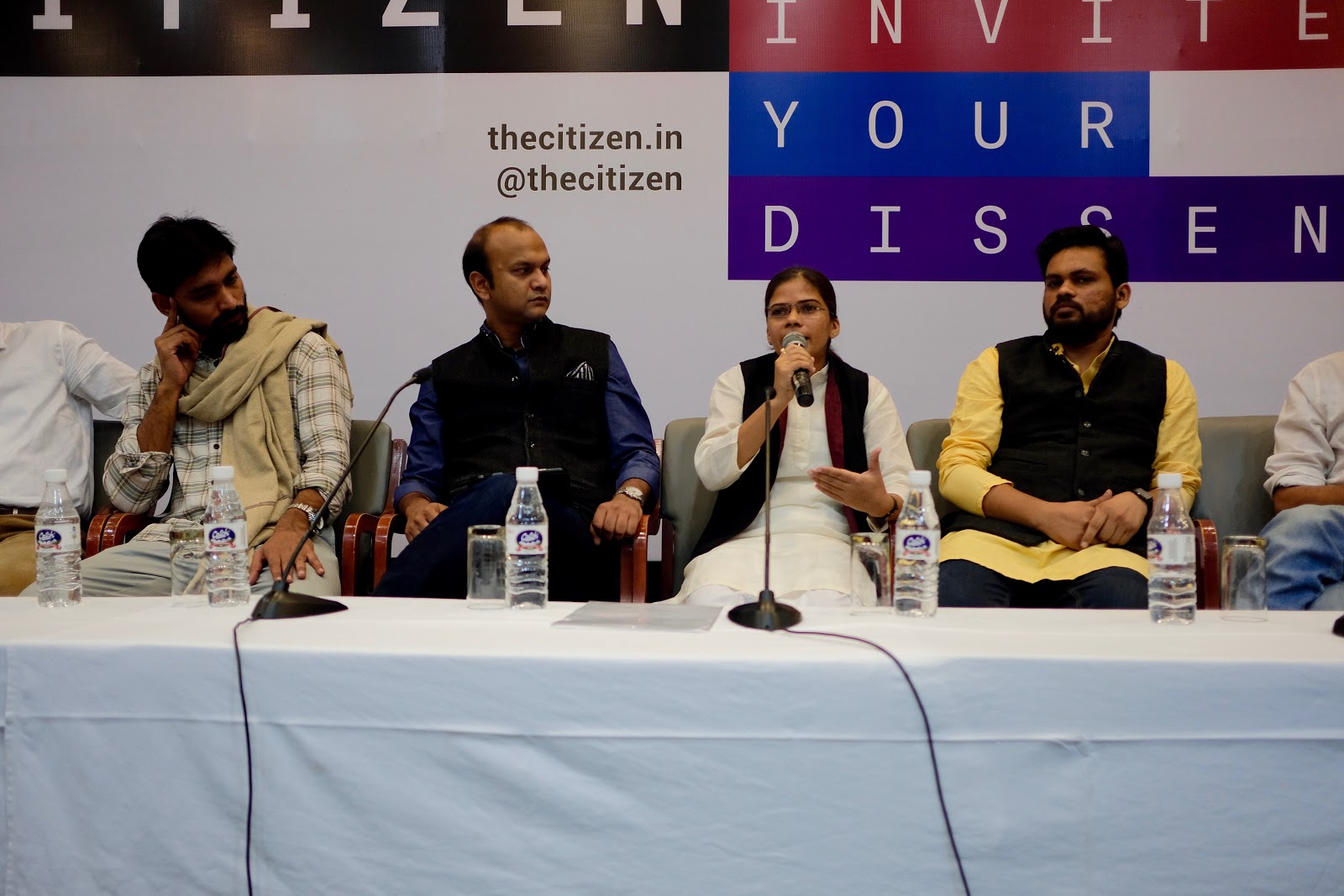 The India International Centre halls were packed to capacity, more with the young than the old which in itself is quite a change for this venue. This was because the speakers were student leaders, every single one of them emerging from a struggle to lead yet another struggle for campuses that allow freedom of dissent, and do not brand those who question as anti-nationals who need to be placed behind bars. Former News X and Rajya Sabha TV anchors Bilal Zaidi hosted, and Ishan Russell moderated the discussion to make the evening lively and interactive. 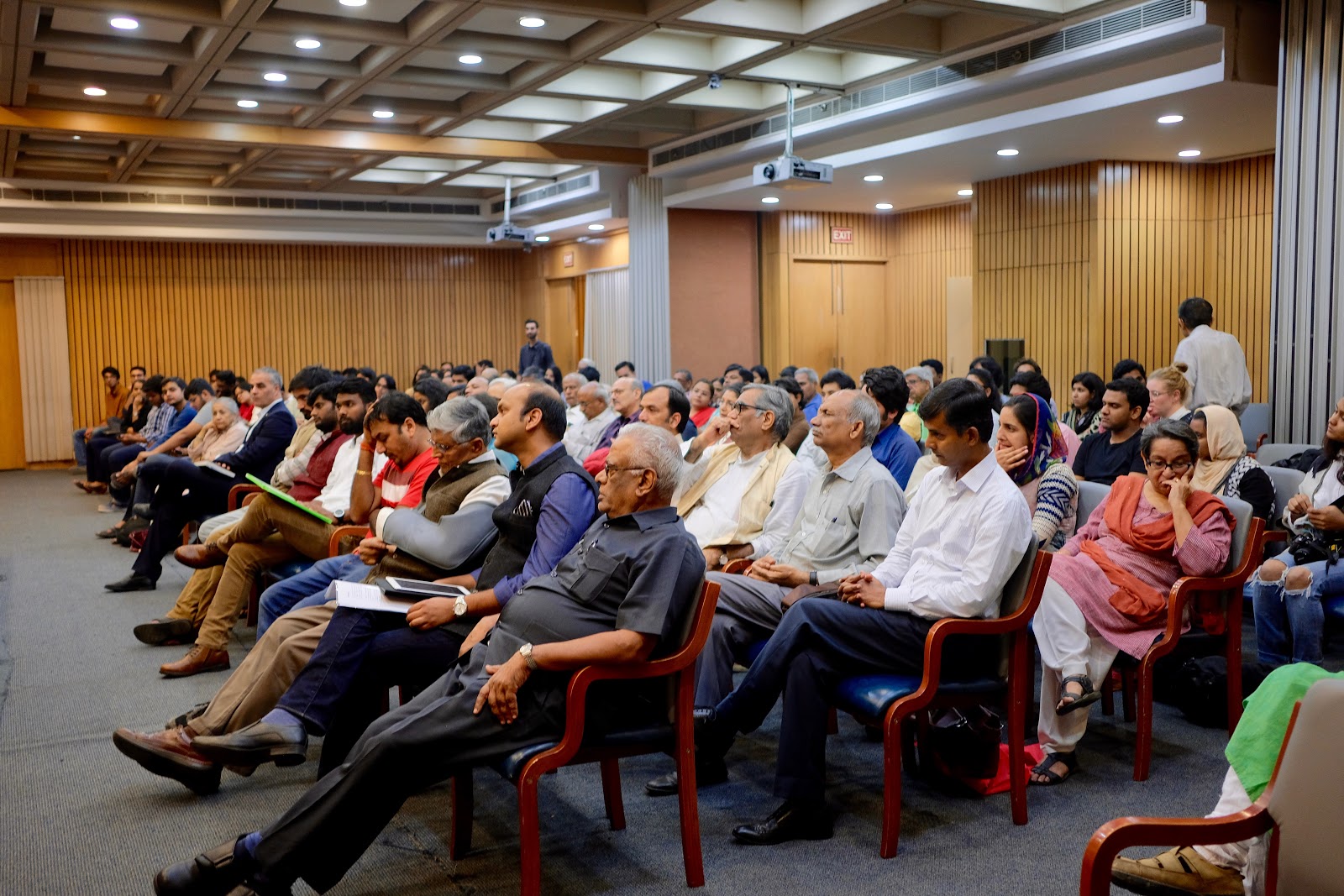 There were Sreerag Parayil, President of the students union of Hyderabad Central University, Dontha Prashanth former HCU students president who had been one of the five to be ostracised by the administration with Rohith Vemula and who have struggled against the might of the entire establishment to win the elections just recently; Richa Singh, former President of Allahabad University who fought not just for students rights but also for gender rights, facing deep patriarchy even amongst the progressive sections; current JNU students union office bearer Shubhanshu Singh along with Umar Khalid who was branded as anti national by the right wing, a terrorist by media channels and has been waging a constant battle for the freedom of speech since; Pradeep Narwal who left the ABVP in JNU and has been slapped with cases since, being picked up by the cops recently while on the way back from a Bhim Army meeting, and threatened with an ‘encounter’; and Amber Fatmi, student activist from Jamia Millia Islamia who is part of the ongoing struggle in this campus for the restoration of the Students Union that was dissolved 12 years ago. 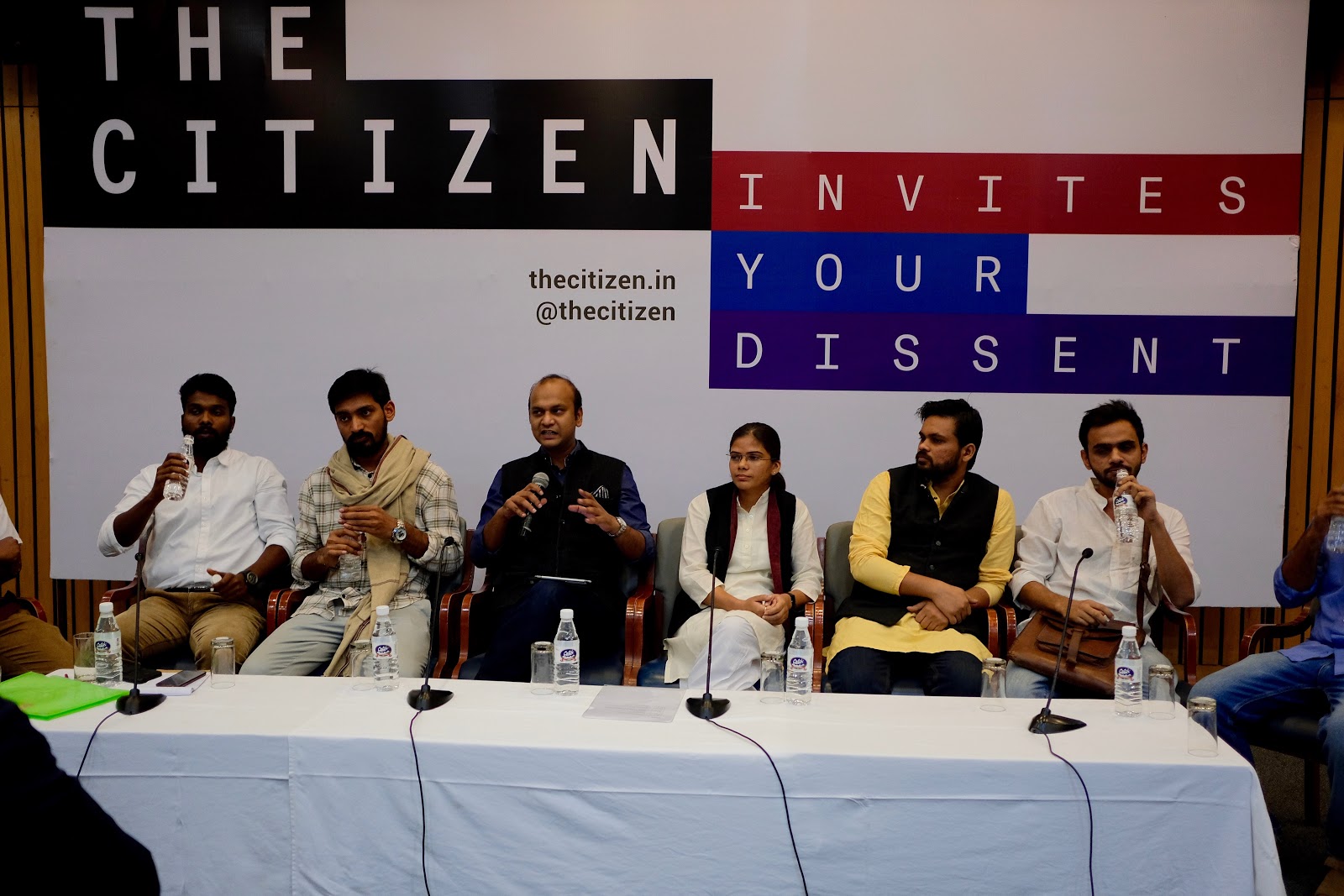 They came with experience, a lot of it crammed into their young lives as they live on the opposing end of the fence, and with personal stories. Richa Singh for instance broke the glass ceiling of Allahabad University to become the first woman students union president ever, but found that there was resistance from within, and from those who were on the same side of the fence. Her battle for her right to speak out, to dissent was thus tougher and yet it did not crack her belief that there is no way forward but to oppose those seeking to shackle freedoms and subvert the Constitution. 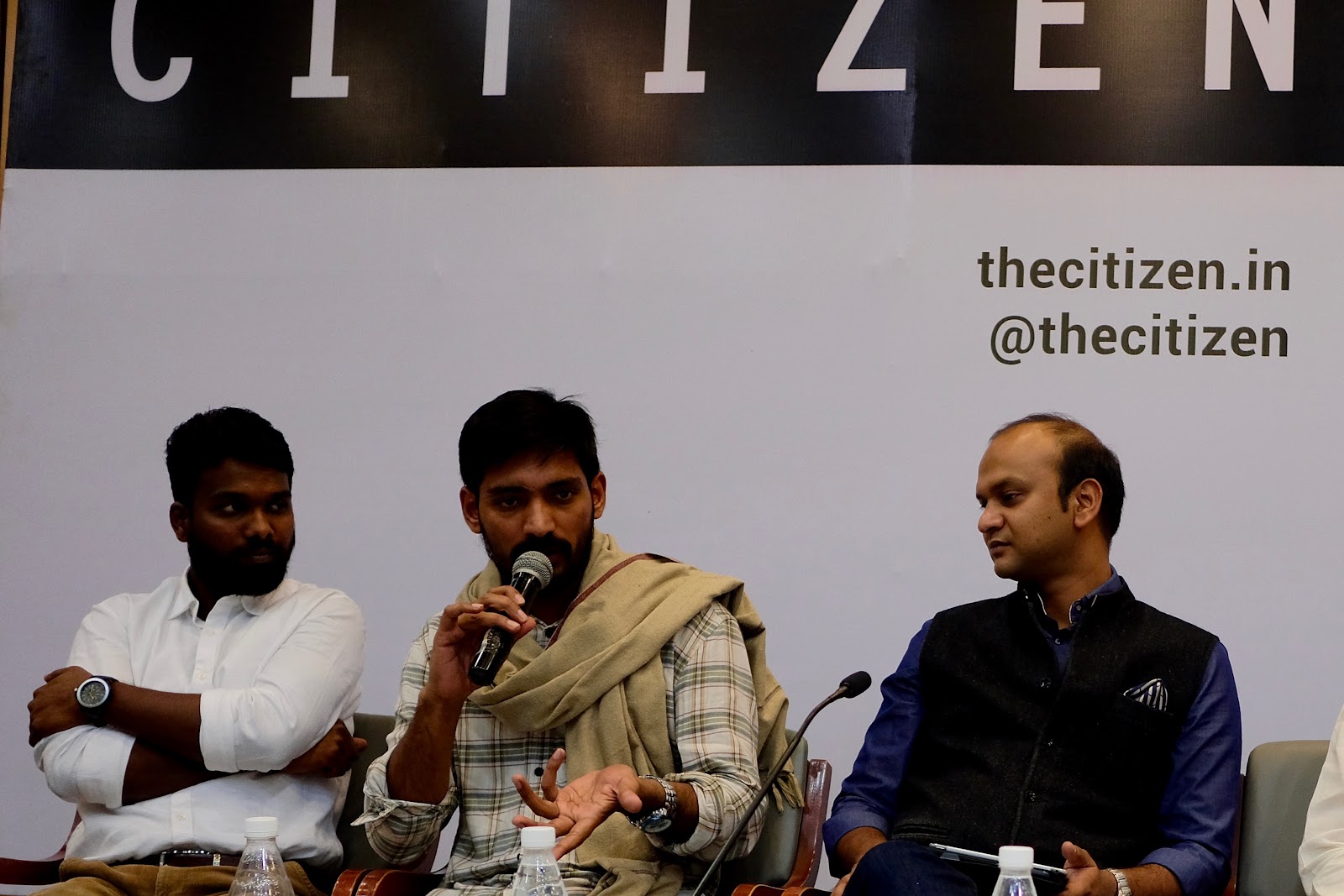 Narwal made an important point, that as an ABVP member and part of the establishment his life had been one of privilege. As he accepted the status quo without question. But the moment he started questioning what he had been led to believe---for instance, that encounters were justified----he has a case and a proctorial enquiry against him. And was interrogated by the cops for five hours at gun point. He is now conscious of his Dalit identity, and the fact that all is not as it seems to be, but there are wheels within the wheels that ensure a certain servility and a conformity that is crippling for democracy. 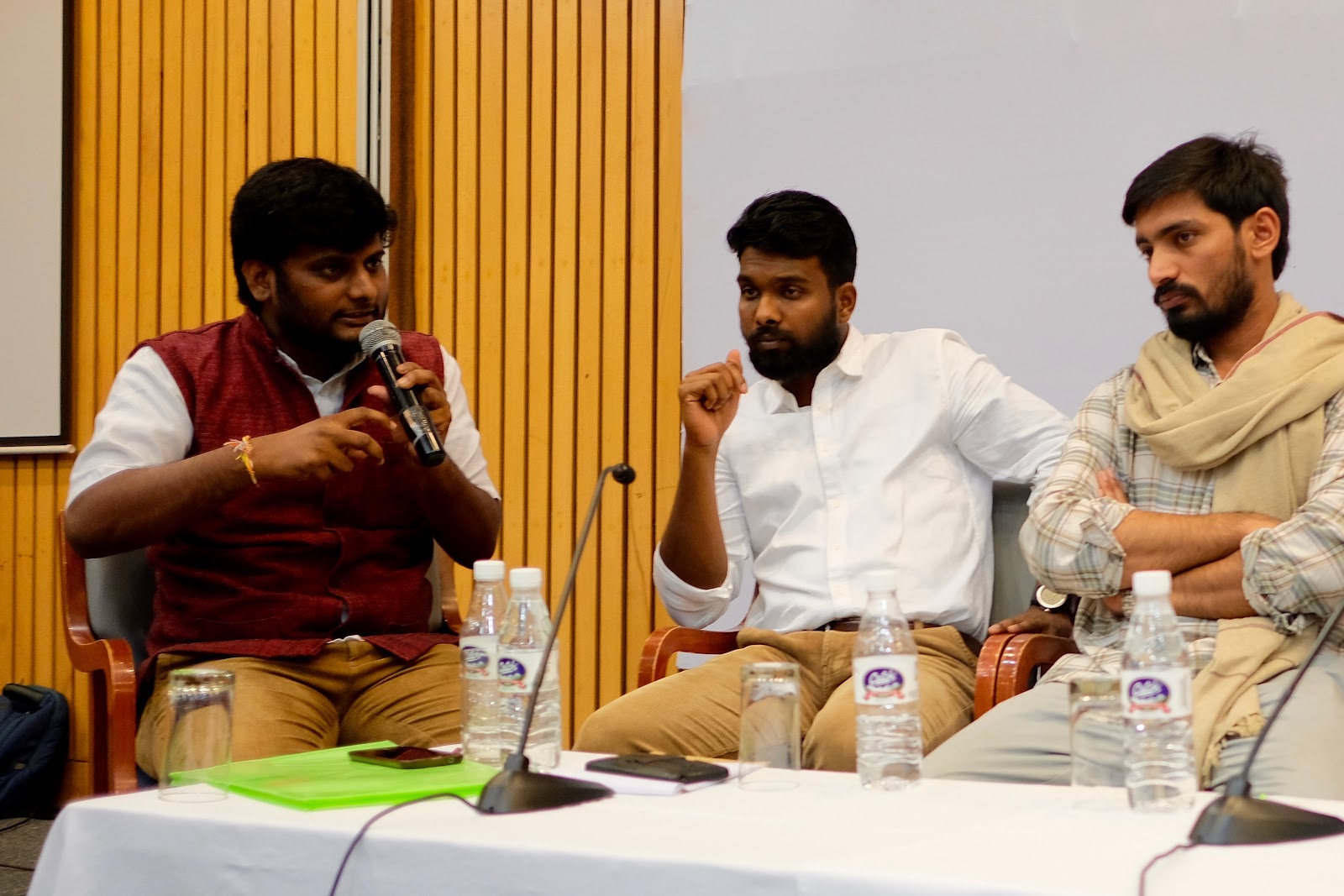 (The panelists from Hyderabad Central University speak of their struggle)

The two students of Hyderabad Central University are a clear example of how struggles can succeed, and how a tough battle can suddenly deliver encouraging results. As both Payaril and Prashanth said, the very fact that they were in University was because of those who had struggled before them to create this space. And that after their colleage Rohith Vemula’s suicide, they emerged from the tragedy with a new determination to continue the fight. And soon were joined by more and more individuals and organisations, to a point where this time they captured the Students Union despite the huge money power and state might behind the ABVP. All progressive forces came together in the campus with the long movement vindicated with victory. 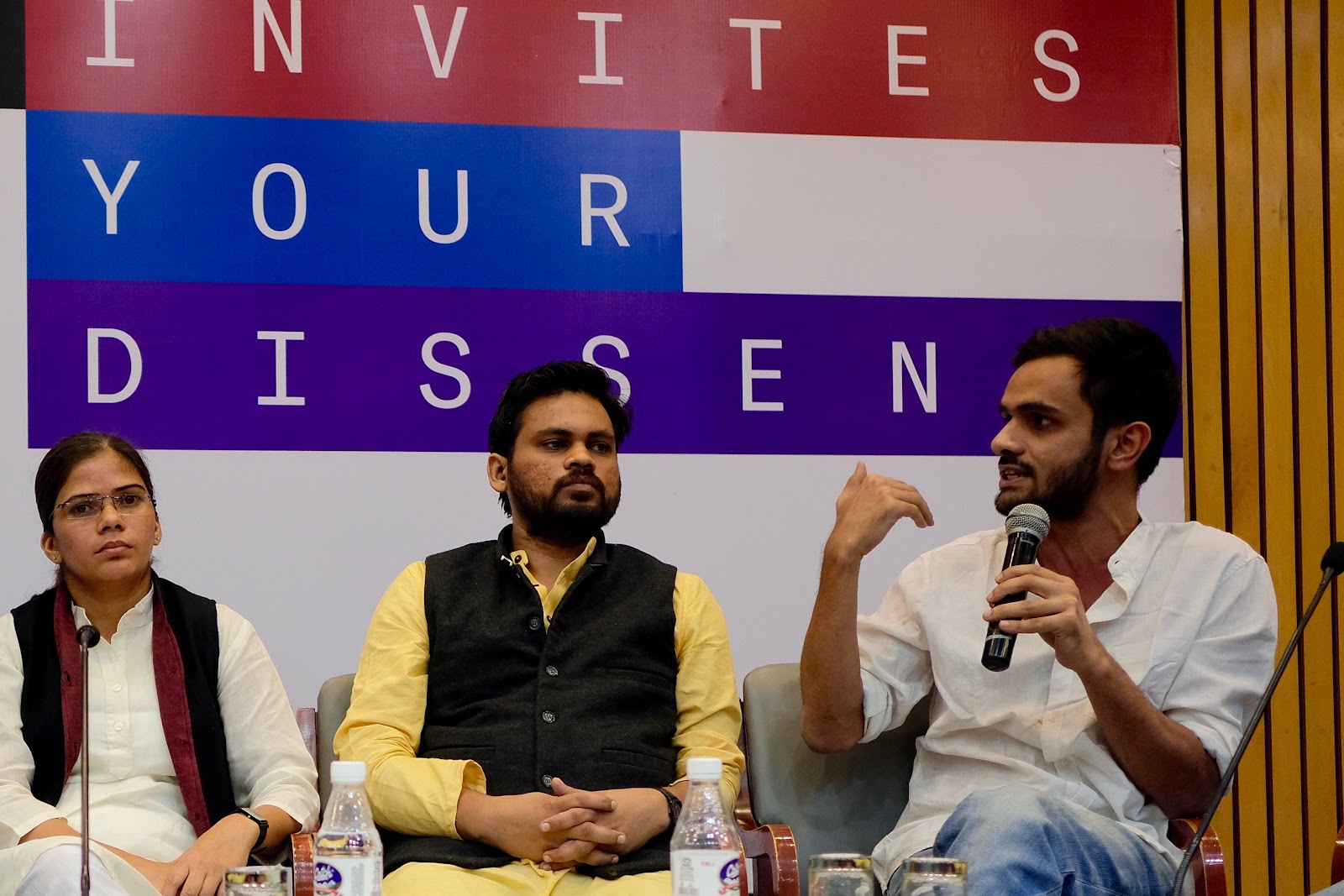 The students, speaking frankly and without hesitation, spoke of how now the movements restricted to individual campuses had merged into a mass movement and “today we are all together, in contact, connecting and struggling.” Dissent of course for all of them was key to the struggle, and to the freedom of Indian Universities, indeed India itself. 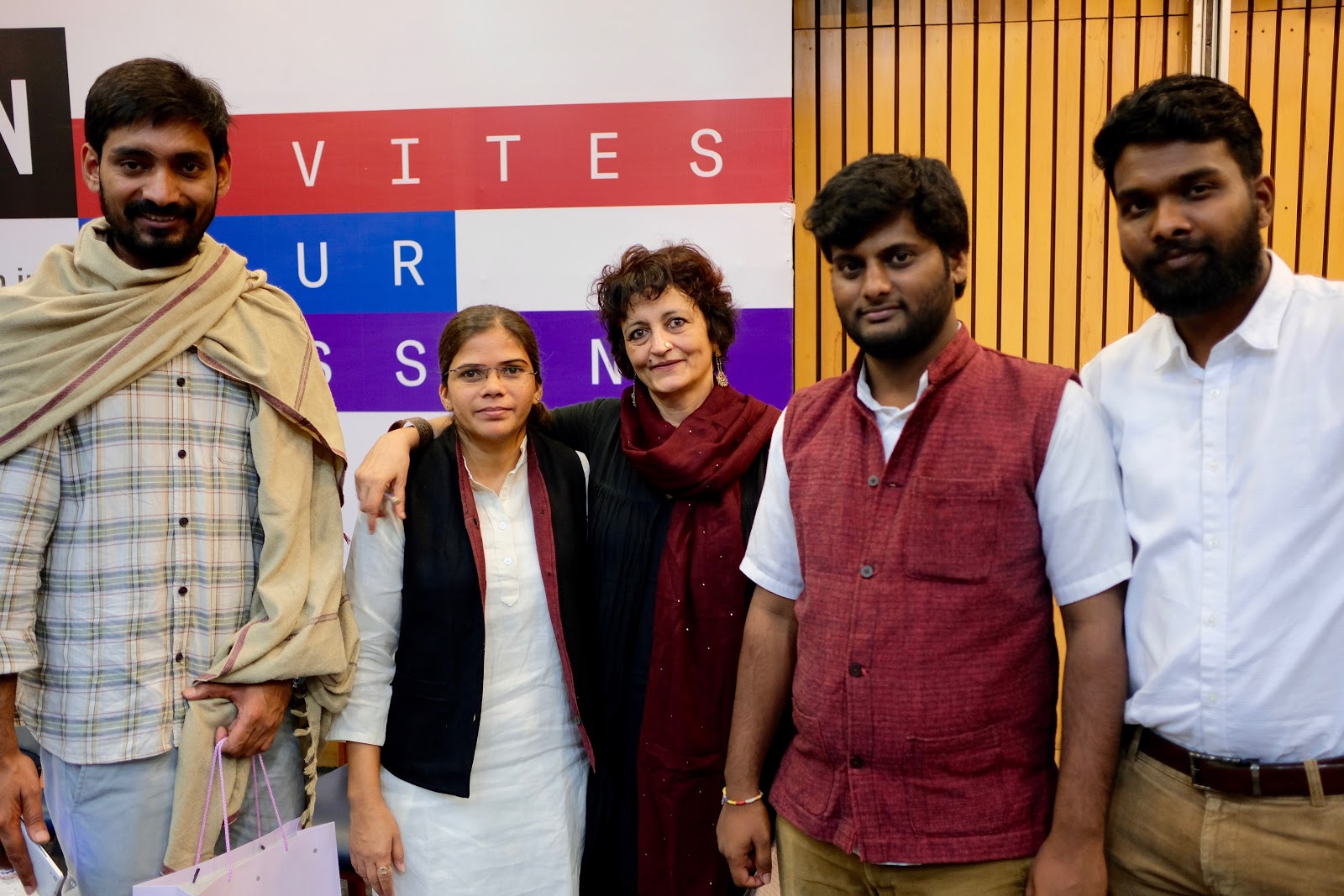 (Our editor Seema Mustafa with some of the panelists)

The Citizen screened a video at the event, announcing its newer design and identity. The Citizen’s editor-in-chief Seema Mustafa spoke of The Citizen’s journey, and the fact that the organisation is committed to retaining its independence. As such, it is free from political or corporate funding.