HYDERABAD: “Keeping in view the situation prevailing in the campus”, the Registrar of Hyderabad Central University, has issued an order “authorising the Chief Security Officer to take photographs of the activities, videographing, checking of ID cards, confiscation of banned substances, questioning the suspected activity, peventing the unauthorised entry, inspection of hostel rooms/play grounds/open areas in the campus on suspicious grounds, unlawful activities and any other activity against the rules and regulations, to safeguard the interests of the University , until further notice.”

“This order will come into force with immediate effect”, that is November 10,2017. 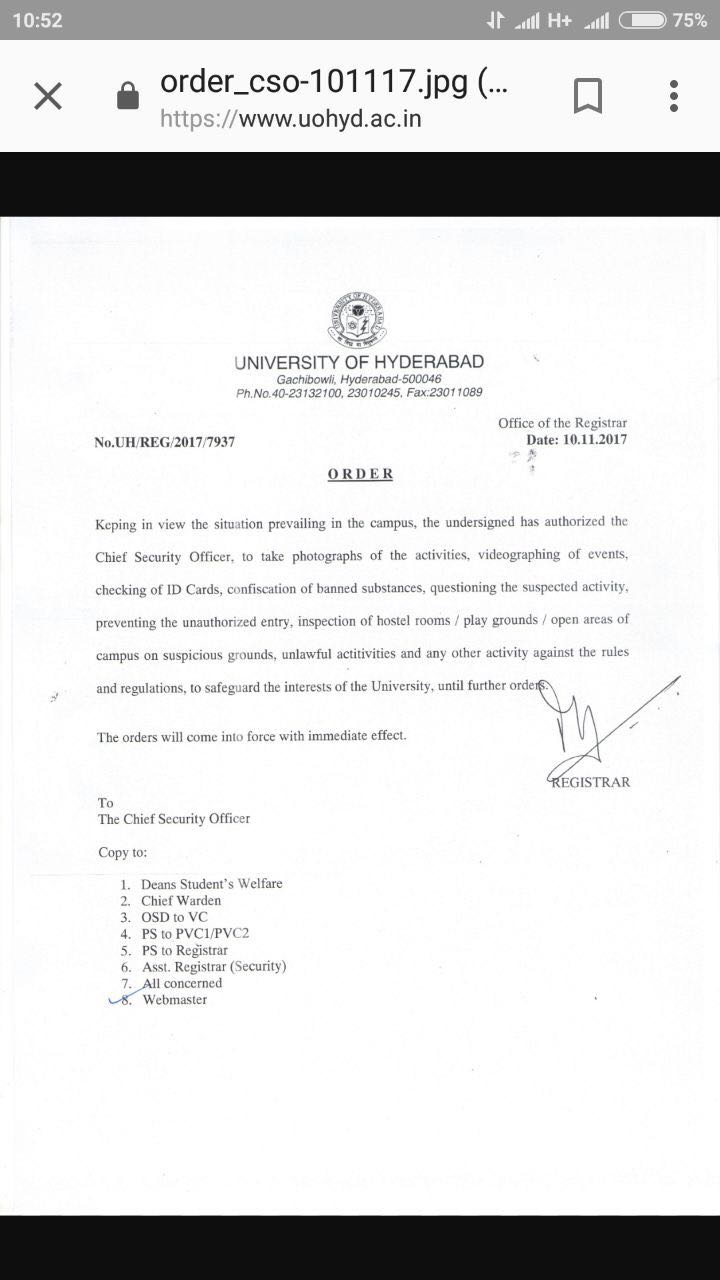 The order, effectively converts HCU into a fortress with security being given full authority to stop and check students, stop their activities if found ‘suspicious’, enter the hostels and keep a very close eye on the HCU students.

That this has come after the new Students Union has been elected to power is not seen as a coincidence by the students in the campus. Despite using all “their power” as Students Union President Sreerag Poickadan, a PhD scholar told The Citizen, the authorities were unable to ensure a Akhil Bharatiya Vidyarthi victory. He said that the students organisations decided to sink their differences, and come together under the Alliance for Social Justice (ASJ) banner for the Union polls and “this model worked.”

Poickadan said that it was a tough fight as “we did not have money power or the support of the University administration.” He said since then the pressure has increased on the students, but “at least we have a representative body.”

This order refers to “the situation in the campus” as being the trigger to increase surveillance and checks on students. Students themselves describe the campus as peaceful, except aware and assertive of its rights.

Scholar Dontha Prashanth, who was amongst the five with Rohith Vemula, who had been thrown out of the hostel said that the struggle for them has not been easy. He said that Vemula, like the others with him, were all targets of a social boycott in the university and by making the students leave the hostel, the authorities were basically enforcing this discrimination. He said that Vemula’s suicide was a result of this humiliation “and after that we are determined to reclaim our space and continue the struggle for equality.”

The control of the students by all the groups, other than the ABVP and the NSUI that has a marginal presence, is clearly irksome with the Vice Chancellor Appa Rao Podile being seen as hostile to their interests by the Students Union. Rao was the VC when Vemula committed suicide, sparking off protests against him in the campus. He was removed briefly, and then reinstated with the students close to Vemula and the other organisations declaring their intent to continue the struggle for his “removal and arrest.”

Significantly Appa Rao received the “Millennium Plaques Honour” from Prime Minister Narendra Modi earlier this year as one of eight scientists recognised for their contribution in January this year. The Joint Action Committee issued a statement criticising the award and describing Appa Rao as “plagiarist” and “substandard scholar.”

The statement at the time read, "Post-Rohith Vemula's Socio-Politico-Institutional Murder on January 17, 2016 and the subsequent Dalit-Bahujan Uprising across the country gave birth to many stooges who helped in suppressing the movement. Appa Rao Podile is one such stooge who is now being rewarded for the services to his masters in BJP. Let's not forget that this man was chosen out of turn and by overlooking several eminent scholars. This was done by the Government clearly to suppress Dalit student assertions on the campus. It was only after Appa Rao took charge that things on the campus went on to precipitate. This has been a trend of Modi Government, appointing people out of turn and promoting stooges is nothing new to the BJP, as it has been seen in the out of turn appointment of the Army Chief, appointment of Chairman, FTII, and so on... The greatest tragedy about the conferring scientific award on Appa Rao is that he is a disgrace to the spirit of scientific temper. He is not only a believer in the unscientific caste system but also is a proven plagiarist and a sub-standard scholar. Appa Rao Podile has been a disgrace to the scientific community.”

Clearly with the new order the confrontation deepens.