Farmers to Take Delhi by Storm on November 20

Farmers to Take Delhi by Storm on November 20

NEW DELHI: Five days from now, on November 20, thousands of farmers will descend on Delhi. Travelling across the country, leaders of 184 farmer organisations have traversed 10,000 miles and addressed over 500 public meetings to bring the issues-- that have crippled kisan households and led countless to commit suicide--to the national capital.

And they will stay here, outside Parliament, until their two basic demands are met by the central government that has been running away from farmers problems. The umbrella organisation, the All India Kisan Sangharsh Samiti, has decided to press for two major demands--- one, waiver of all loans; and two, crop remuneration price to be hiked to one and a half times the cost of production.

State governments as in Maharashtra where the stir spread through the state, with farmers laying siege to the highway, started talks but these have led to ‘nowhere.’ Farmers spokespersons said that the dialogue was little more than delaying tactics, and “we have seen through the.”

One of the AISS leaders Hanan Mollah told The Citizen that the farmers were now fed up and tired. They have become the victims of these neo-liberal policies, he said, with their distress now real and intense. Mollah said that the 184 organisations all had a list of local demands specific to their areas, but for the purpose of November 20 they had agreed to focus on the above two demands that form the core of the farmers unrest today. He said that most supported the implementation of the Swaminathan Commission recommendations, but to ensure that headway was made they had all zeroed in on the two related to loans, and remuneration, both being major issues spiking agrarian distress.

The farmers are expected in lakhs. Over a lakh workers have just left Delhi after three days of demonstrations with women occupying centre stage. The kisans, however, are not likely to leave although officially the demonstration is for two days November 20-21. This was to coincide with the Parliament session that begins usually in the third week of November, but has been postponed by the government worried about the Gujarat elections.

The Tamil Nadu farmers who had come to Delhi hoping for central intervention in giving them relief from crippling drought have had to leave because of the decision to move the protest site from Jantar Mantar to Ramlila grounds. These farmers who made two extended visits to Delhi, using novel methods to bring attention to their plight, had decided not to leave. They will, however, be returning to join the big rally. 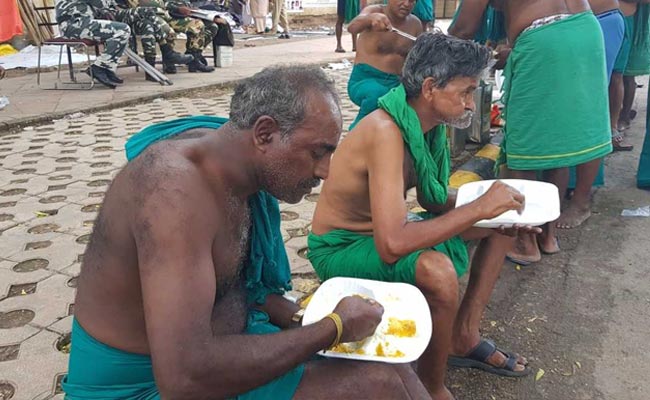 The Delhi Sikh Gurudwara Management Committee in a welcomed gesture of solidarity organised langars for the protesting farmers from Tamil Nadu, here on meagre resources. They were victims of the worst drought in their state in 140 years, and were demanding a loan waiver and help from the government that has remained indifferent to their plight.

Farmers protests have been continuing over the past couple of years in different parts of India. Hundreds and thousands of farmers have been coming out on the streets seeking redressal of their grievances but as in Madhya Pradesh, they were first fired upon resulting in death and injury and again made to strip in a police station. The anger is thus, widespread and the mobilisers report “great enthusiasm and support” that they expect will bring out large crowds for the chalo Delhi rally. This will be converted to a claim the space demonstration with Mollah saying, “yes of course, the farmers might just decided not to go back and stay here indefinitely until their longstanding demands are met.”

This comes while the campaign for the Gujarat elections is gathering momentum, with farmers from the election bound state also expected to join.