JAIPUR: The eight point note below, called the SP Alwar note, circulating in the media, on the killing of Umar of Ghatmika, Kaman Pahadi, Bharatpur district due to cow vigilantism, tries to showcase it is an ordinary (everyday) fight between two gangs of criminals, one of which are habitual cow smugglers and the other anti-social elements, in which one person was killed. It is also important to understand that they are trying to show it as gangs of two communities the Meo Vs Gurjar, without taking the names of either community. 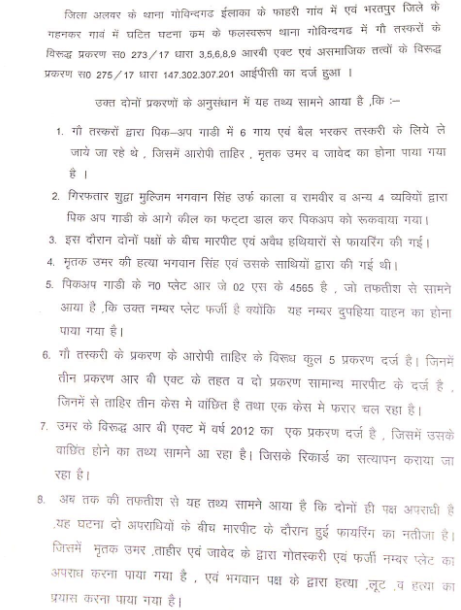 This is a clear indication of not only protecting the killers, so called cow-gaurakshaks, but also an attempt to wipe out their links to the Sangh parivar( Bajrang dal etc) . The effort is to divert attention and the increasing heat on the government of Rajasthan, nationally and globally.

What is very disturbing is that the refrain through the cops note, from the first point itself, is that Umar Mohammad and his colleagues are cow smugglers for which they were wanted in various cases of Gau taskari, the term “alleged” is also not used and instead it is stated that they were smuggling cows again this time in a pickup truck with a fake number and that both sides fired at each other, like mere gangsters involved in a fight.

It is also observed throughout the note that they have tried to show a history of cow smuggling by Tahir and Umar, however, have not mentioned the history of criminality of Bhagwan Singh and others in the murder case, two of whom have been arrested. So while downplaying the crime of murder, the police has also tried to defame the now dead Umar and his seriously injured associate Tahir and the driver Javed.

The note is completely silent on the most critical part of the crime, which is mutilation of the body, transporting the body to the railway track in another police station area , tyres being stolen from the pickup truck, and the role of the police through all this.. There is no mention of what has happened to the cattle.

The note states that the police investigation in the case shows that the “ Cow smugglers” were carrying 6 cows and bullocks for smuggling in a pickup truck naming the accused Tahir, the deceased Umar and Javed. That the pickup was stopped by the arrested accused Bhagwan Singh alias Kala and Ramveer along with their four colleagues by laying out by a nail ridden board. Both sides fired at the each other and beat up each other, although Umar happened to be killed by a bullet fired by Bhagwan Singh and his colleagues.

The note goes on to state that the vehicle carrying the cattle that night had a fraudulent number RJ02SK 4565 as this series is of two wheelers and not four wheelers.

Tahir, the alleged accused for cow smuggling had 5 cases against him, 3 of cow smuggling, and two relating to simple brickbats. Of the 5 cases, he was wanted for three and was absconding in one, according to the cops.

For Umar the note states that verified records show that he too had a case of cow smuggling in 2012, for which he was wanted.

So it concludes that both the sides were criminals and this incident should be looked upon as a fight between two criminal groups in which one death happened due to the firing that ensued. In which the deceased Umar, Tahir and Javed have committed the crime of cow smuggling, moving in a vehicle with a fake number plate and Bhagwan and others committed a crime of loot and murder.

By not looking at it squarely as yet another case of cow vigilantism which is targeting Muslims, by showing them as cow smugglers and criminals the State has decided not to provide justice and protection for those under threat. Thus the plan of providing safety to the Muslim dairy farmer is a non-issue with the state government and the cow vigilantes have absolute impunity to go on with their killings.

The Peoples Union for Civil Liberties reiterates its demands that for justice:

· The case be transferred to the SIT or CBI for fair and just investigation.and all the accused by arrested, including the police.

· The criminalising and defamation of Umar and others should stop. Stop calling them Gau Taskars, in no case have they been convicted.

· The deceased’s family be given Rs. 25 lacs including a Government job for one member

· Tahir and Javed be provided protection and compensation.

· The Raje Government come out with a safety plan for the safety of Meos in Alwar, Bharatpur and Muslim dairy farmers. The protection of the life and liberty of the Meos and all the other Muslims of the state is a Constitutional obligation.