NEW DELHI: Driven by sheer distress and a spate of suicides, over a lakh farmers from all over the country reached Delhi to raise a united voice for just two of their many demands, loan waivers and remunerative prices for their crops.

Shouting slogans for farmer-worker unity, for justice, for rights, against the government the farmers marched from Ramlila Maidan to Parliament street in a two day mass protest being addressed by kisan leaders and activists from all over India. 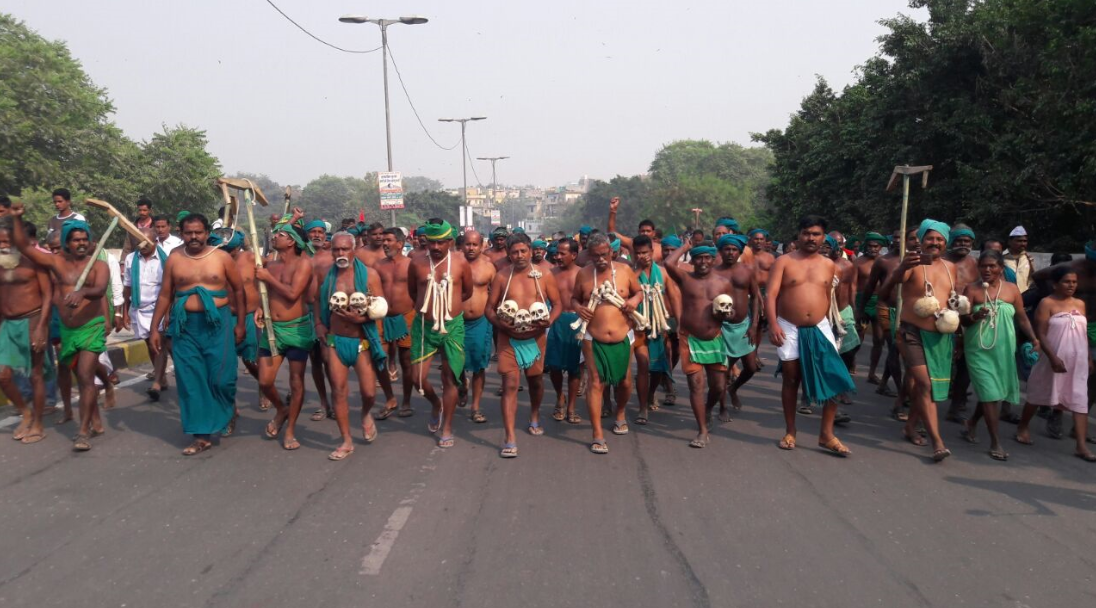 The Kisan Mukti Sansad, outside Parliament that has delayed its winter session, will be underway for the two days, with 184 farmer organisations drawn from 29 states of India under the common banner All India Kisan Sangharsh Coordination Committee (AIKSCC). They are demanding the remunerative price for agricultural products recommended by the National Agricultural Commission which was the poll promise of the Modi government, and loan waivers. Both these issues have contributed to severe agrarian distress, being the identified two causes for a large number of kisan suicides.

Medha Patkar, Yogendra Yadav and others addressed the rally today. Widows of the farmers who committed suicide were also present in large number. The Tamil Nadu farmers who were in Delhi for 141 days were also in the forefront of the procession, having returned to Delhi for the big event today.

Sudha Sundaraman, AIDWA told The Citizen, “this rally is very significant as it has brought together the debt driven farmers, widows of suicide committed by farmers and agricultural labourers from 29 states of India. They are bearing the brunt of Modi government’s economic policies. If the demands of the farmers are not met, it is going to be a national crisis. This unprecedented huge gathering of farmers sends signal to the government to reverse the economic policy of the government.”

Annie Raja, CPI told The Citizen that “Agriculture in India has received a back seat under the Modi regime. The farmers are forced to commit suicide due to crop failure, non- profitable agricultural price policy and subsequent mounting debt. The government is still not serious about the concerns of the farmers. Agriculture sector is the major employment sector in India, which is under crisis. So, the government needs urgent policy correction.”

Yogendra Yadav, Swaraj Abhiyan said in response to a question from this reporter, “ this rally is a historic opportunity because it has brought together numerous farmers organizations from all over India first time. This kind of huge gathering is unexpected and shows the level of discontents from them. The government should step in to redress their grievances.”

P. Ayya Kannu, President of National South Indian River Interlinking Farmer Association leading the Tamil Nadu farmers to this march said, “that despite 141 days of protests at Jantar Mantar, the government ignored our genuine demands. We are back again with our skulls, begging bowl to take part in the All India rally. Modi government should protect us from the impending our livelihood crisis. This is the only option left.”

The farmers will attend the second day of their parliament tomorrow. A decision will then be taken whether they will go back at all, or stay on until the government finally decides to hold the winter session that has been postponed because of the Gujarat polls.