On The Campaign Trail: Following The Patel Vote In Mehsana

A multipart series on the Gujarat voter and trends, beginning with Mehsana.

MEHSANA: (This is the first in a multi part series that focuses on the voter in Gujarat. The Citizen examines key trends in the Gujarat Polls, speaking directly to the people)

Much of the analysis predicting whether the BJP will gain or lose seats in Gujarat this time around is centred on the role and impact of three young men.

Alpesh Thakor has emerged as a Kshatriya OBC leader, formally joining the Congress and contesting from Radhanpur. Patidar leader Hardik Patel has grown to be a thorn in the BJP’s side, taking on the party and the Prime Minister head on in rallies and speeches. Amongst the Dalits, Jignesh Mavani stands out -- having led a yatra from Ahmedabad to Una and building that into a movement for the upliftment of Dalits.

The Congress has attached itself to all three leaders, with Thakor formally joining the party; Mevani being given the seat of Vadgam, as the Congress pulled its sitting MLA for the Dalit leader; and Patel - finally - declaring his support for the Congress.

The political impact of these three men is crucial to the final electoral story in Gujarat, and The Citizen team set out from Ahmedabad to find out whether there’s a bite behind the bark.

We headed toward Mehsana -- a Patidar stronghold where, as the local Patels proudly tell you, Hardik Patel’s andolan first began. Patels are 28 percent of the population here. 18 percent are Thakor, 17 percent Scheduled Caste and 5.4 percent Muslim.

The BJP candidate, Nitin Patel, clearly commands respect, but the general consensus is that this time around, there’s the sense of a fight. Hardik Patel -- who has been spearheading rallies across Gujarat, has been banned from entering Mehsana by the Gujarat High Court. The andolan from which he emerged, however, lingers on…

We stop at a chai stall on the outskirts of the central market in the area. (A chai and paan store in Mehsana)

A small group of people quickly gathers around. “This is a BJP area,” says a vocal middle-aged man named Desai Babubhai. “This time, however, fissures in the Patel vote are a complicating factor.” “Some of the Dalit and Muslim vote in the area will go to the Congress, but the party’s success will depend on how much of the Patel vote they are able to get in the end.” He offers his political analysis. “The BJP will win; the Congress will increase its seats and vote share.”

Bhupendar Panchar chimes in. “This has been a BJP seat for twenty years, that’s not going to change. Yes, Rahul Gandhi has done well,” Panchar says, “but Nitin bhai has worked hard and will win this seat.” Panchar’s observation of Rahul Gandhi is the first indication that the Congress leader has been well received in Gujarat this time around. As we travel through the state, we hear favourable comments regarding Rahul Gandhi, even from staunch BJP supporters. The electorate, it seems, is beginning to take him seriously.

Neither Panchar nor Babubhai think Jignesh Mevani has a shot. “The chunk of the Dalit vote will go to the BJP,” they say. “Mevani isn’t known in this area.” We immediately put Vadgam -- Mevani’s constituency that’s just under a 100 kilometers away -- on our map. 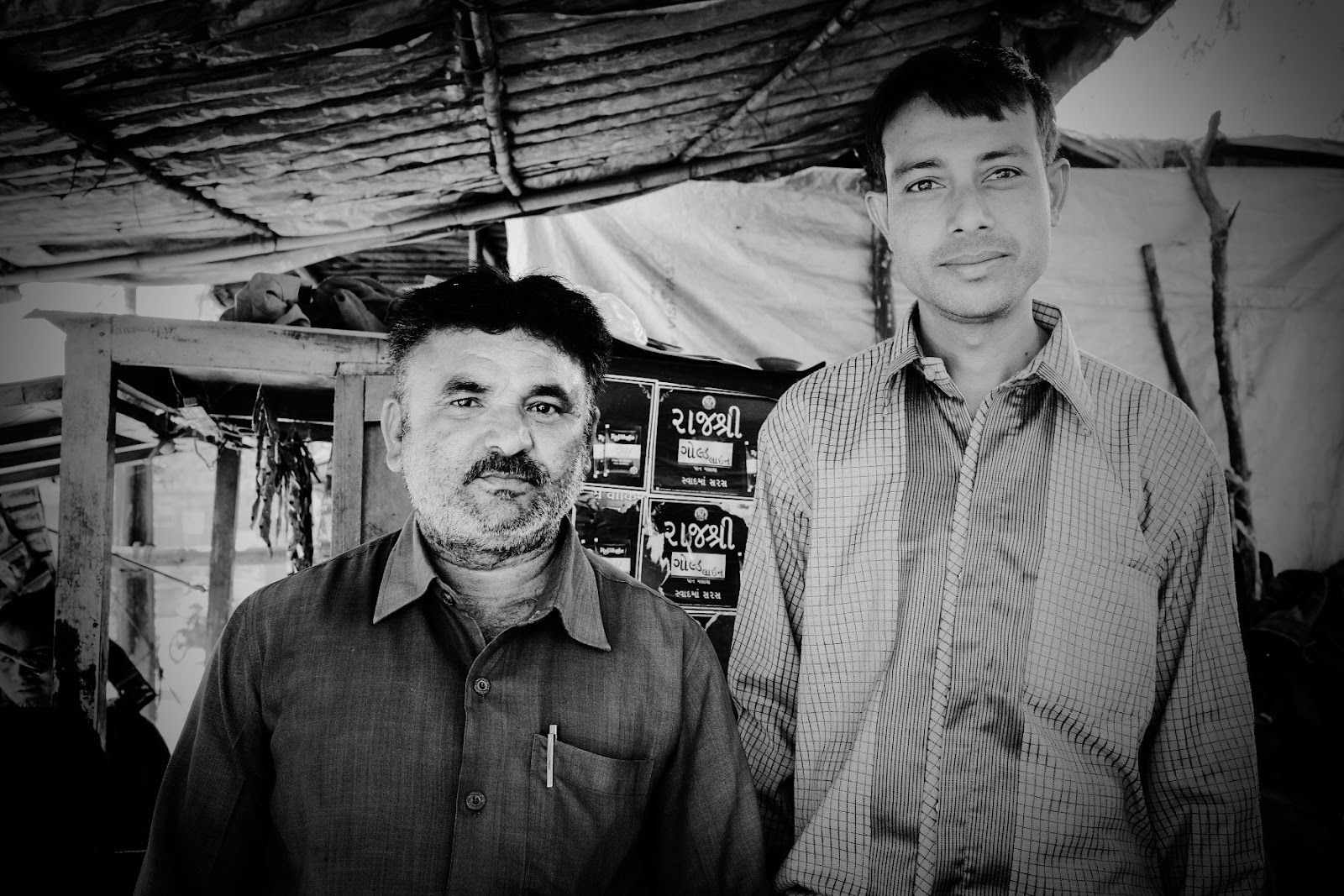 (In Mehsana, Desai Babubhai and Bhupendar Panchar chat with us over a cup of tea)

Next door, a Sindhi shopkeeper is even more certain of a BJP victory. “The Patel vote isn’t shifting,” he says. “Look, inside the main market there’s mostly Patels. They’ll tell you that they’re all voting for the BJP.” Ishvar bhai, as he identified himself, seemed so convincing that we almost decided to take his word for it, and skip the interiors of the main market. In the end, we decided to see for ourselves. 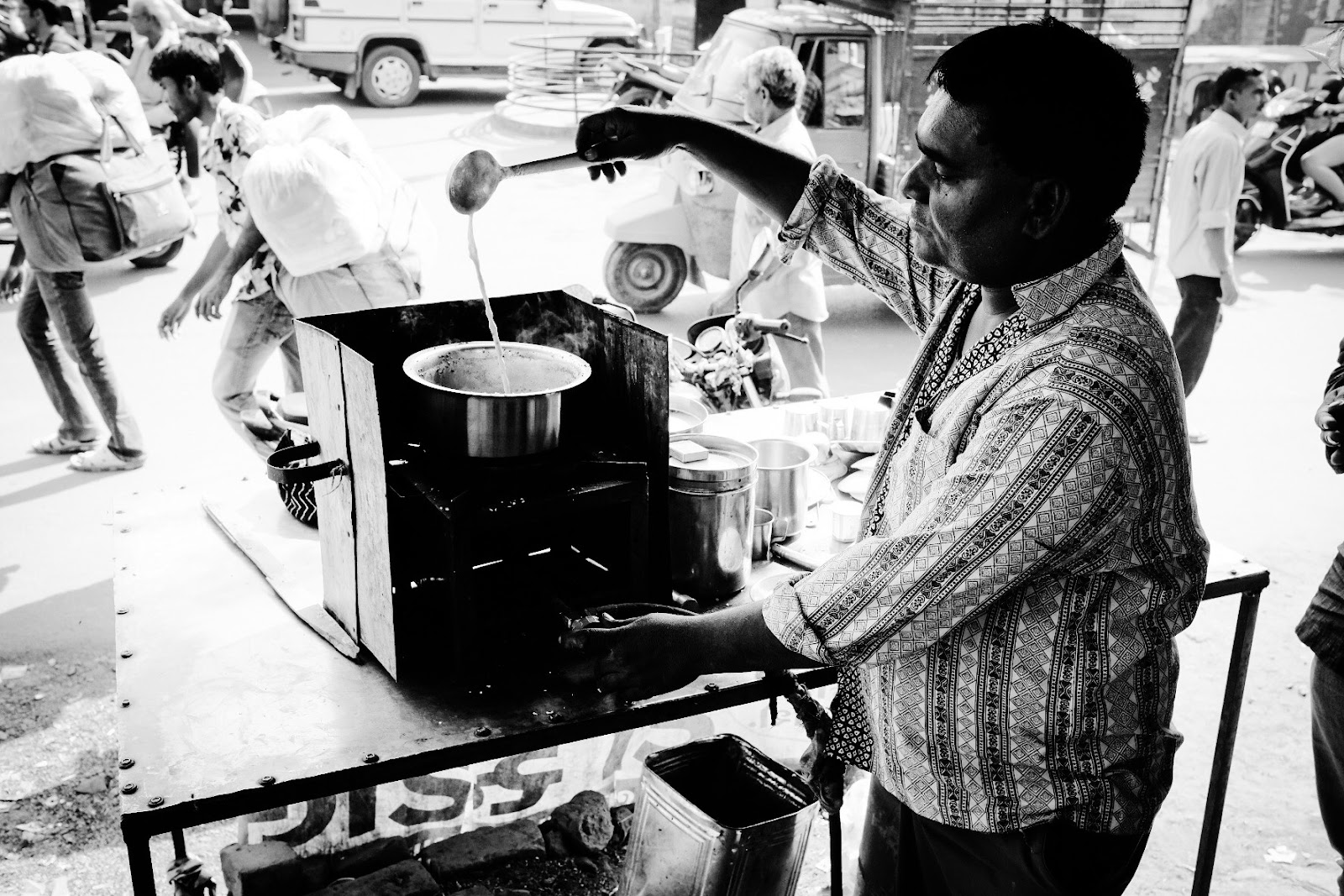 (Chai stalls are a common sight across Gujarat, as they are in other parts of India. Stopping near a stall immediately prompts locals to offer tea)

The first person we spoke to immediately gave a counter view. “The Patel vote is entirely divided. The young blood is with Hardik,” he said. “I don’t think the Congress will give us reservation either,” Rajinikanth, who identified himself as a Patel, continued, “but we’re so angry with the BJP that we’re willing to vote for anyone else.” An older man in a purple shirt walked by. “Record my opinion too, he said, it’ll be BJP.” The man identified himself as an RSS supporter, and walked away.

A little further in, we stopped outside an edible oil store and struck up a conversation. The men sitting there were even more vocal in their anger toward the BJP. “This was a BJP area, but it’s now a Congress seat,” said Ishwar Bhai Patel. “After the Patidar andolan, things have changed.” Parvartan ka mood hai (there’s a mood for change),” he added. “After twenty years, the Patels will bring a Congress government… mark my words, change is imminent.” 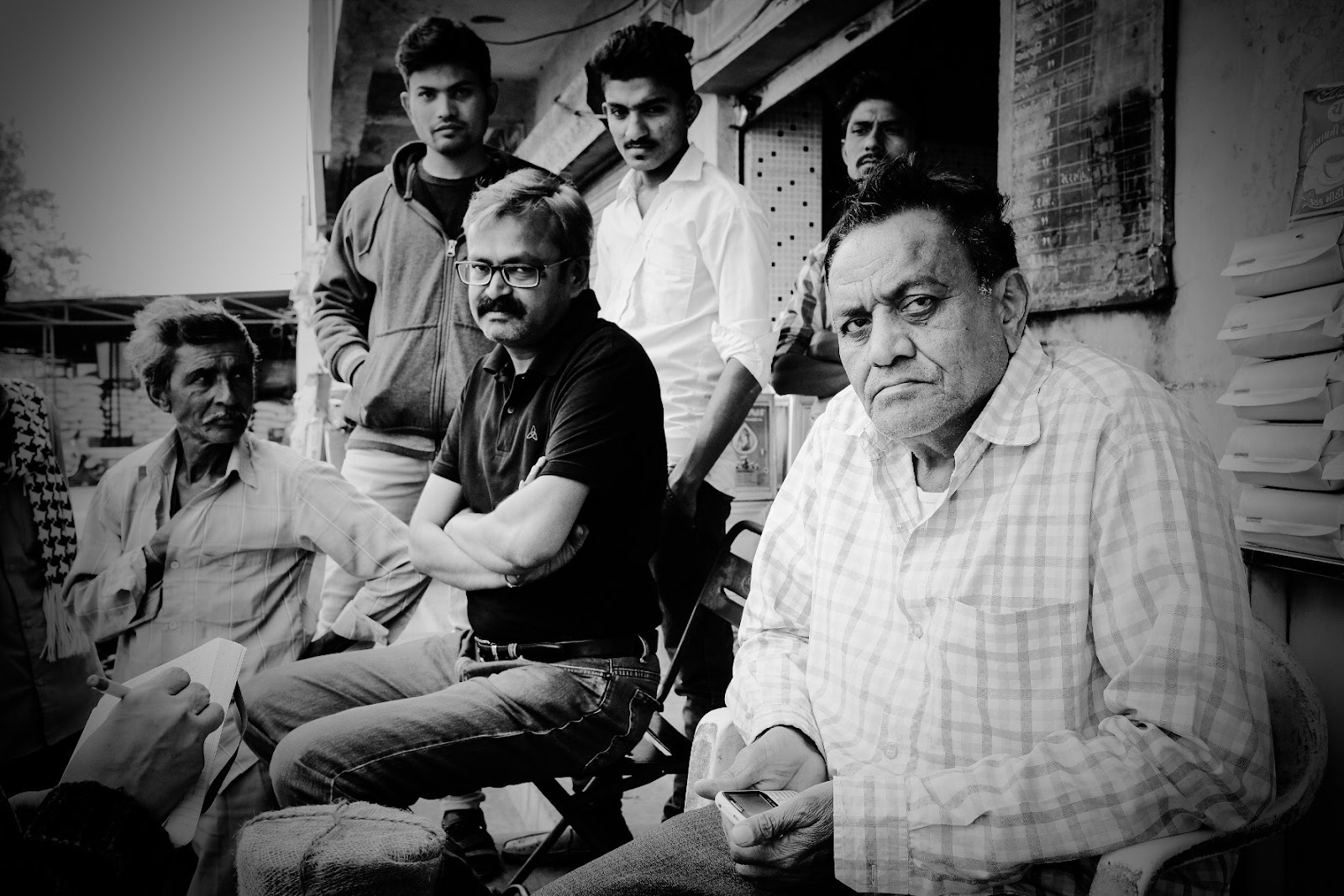 (In the Patel dominated part of Mehsana’s central market, we speak with Ishwar Bhai Patel (right) and others)

A man dressed in jeans and a t-shirt seated next to Ishwar Bhai chimed in. “For me, it’s less to do with the andolan and more to do with the terrible impact of GST now, and before that demonetisation.” “That said, the Patels are upset. Meet this boy,” he points to a young man behind him. “He’s got a postgraduate degree, but couldn’t get a job. He’s working in my store.” We speak to the young man, who corroborates the story. “I thought I’d get a good job, but things have turned out very differently,” he says.

At another small shop nearby, the divisions in the Patidar vote become even more conspicuous. “We’ll vote for the BJP,” say two older men. “What about you?” we turn to a younger man in the store. “Hardik,” he says. “All my friends support him.” “Will you be able to change his mind?” we ask the older men. “Impossible,” they say. “They know their own mind.” 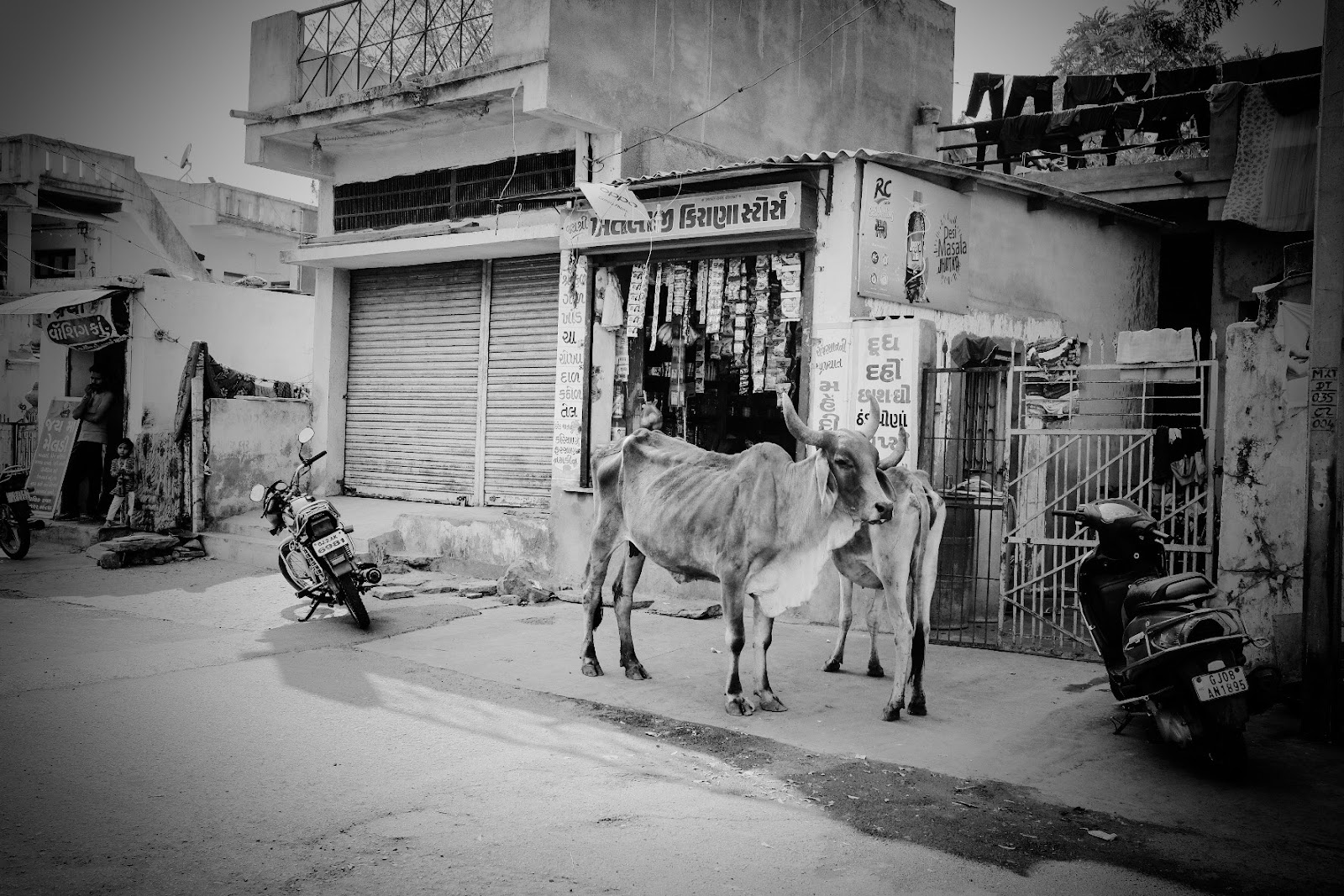 (A small shop near Mehsana)

As we head toward the car, a smartly dressed man in a checked shirt rushes to us. “There’s a division in the Patel vote,” he says. “Hardik Patel has done well, but he hasn’t been able to take the whole community with him.” Ashmuk Patel says he will vote for the BJP. “They might lose a few seats, but the extent of that loss will depend on how much of the Patel vote Hardik will be able to fracture. Only one thing is certain, the whole community isn’t with him… there’s a division.”

As we travel through Gujarat, the division in the Patel vote becomes clearer and clearer. There’s an age divide, with the younger voter clearly in support of the Patidar leader. The “sex CD” seems to have had only a limited impact, with only few bringing it up. Hardik Patel himself has taken on the controversy head on, accusing the BJP of dirty politics and maintaining that his private life is no one’s business. 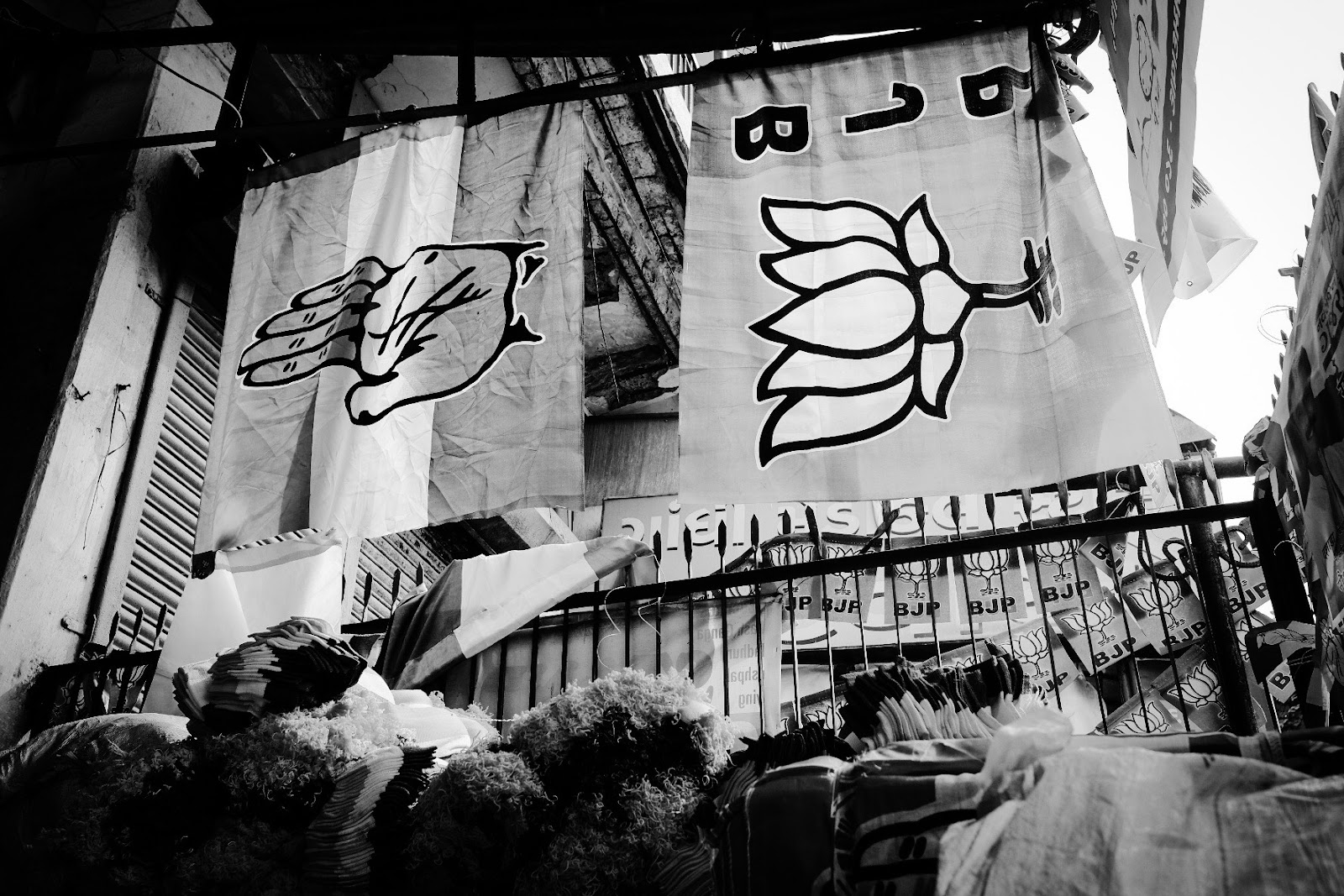 (Party flags in Ahmedabad side by side)

“The BJP has been very smart in creating divisions in the Patidar vote,” an Ahmedabad-based activist says. “The Patels have been divided into three, with the BJP focusing on Saurashtra, as it’s here that Hardik Patel’s influence is greatest.” “The final results is anyone’s guess. What we know is that the Patels are upset; to what extent that will impact their vote for the BJP remains to be seen,” she says.