On The Campaign Trail: 'The Communal Card In Gujarat Is Like A Used Condom'

A multipart series on the Gujarat voter and trends. Has communalism worked?

AHMEDABAD: (This is the third article in a multi part series that focuses on the voter in Gujarat. The Citizen examines key trends in the Gujarat Polls, speaking directly to the people)

Our last stop in our journey through north-central Gujarat -- having traveled through Vadgam, Mehsana and in and around Ahmedabad -- was a small seventh floor flat in a large building in the heart of the capital. Exhausted by hours on the road, we were stopping at an activist friend’s place for a cup of tea.

We were greeted by warm hugs and palpable excitement, as the friends prodded, “tell us, what did you see?” We offered a quick analysis of the factors at play in the parts we had traveled to, and pointed out that communalism -- a key component of recent elections -- was surprisingly not at the forefront of election machinery this time around.

“It’s overplayed,” one of the activists said. “The communal card in Gujarat is like a used condom; overused in fact.” “People are sick of it; it’s not going to work here anymore.”

“Fingers crossed it remains this way,” another friend interjected. “So far, this has been the best election Gujarat has had in recent years, but there are two weeks still left, so let’s not get ahead of ourselves -- communalism might just rear its ugly head.”

Thus far, however, communalism hasn’t been a major factor this election -- despite attempts to divide the vote along communal lines. In Vadgam, for instance, whatsapp messages were being circulated amongst villagers highlighting Dalit leader Jignesh Mevani’s statement, that if he had two sisters, he would marry one of them off to a Muslim. The attempt seemed to have a limited impact, with only a handful of people we spoke to referring to it.

The absence of overt communalism does not mean that voting isn’t polarised, as areas with a large Muslim population are considered Congress ‘safe’ seats, and the BJP government’s 2008 delimitation exercise attempts to cut into precisely these voting dynamics. 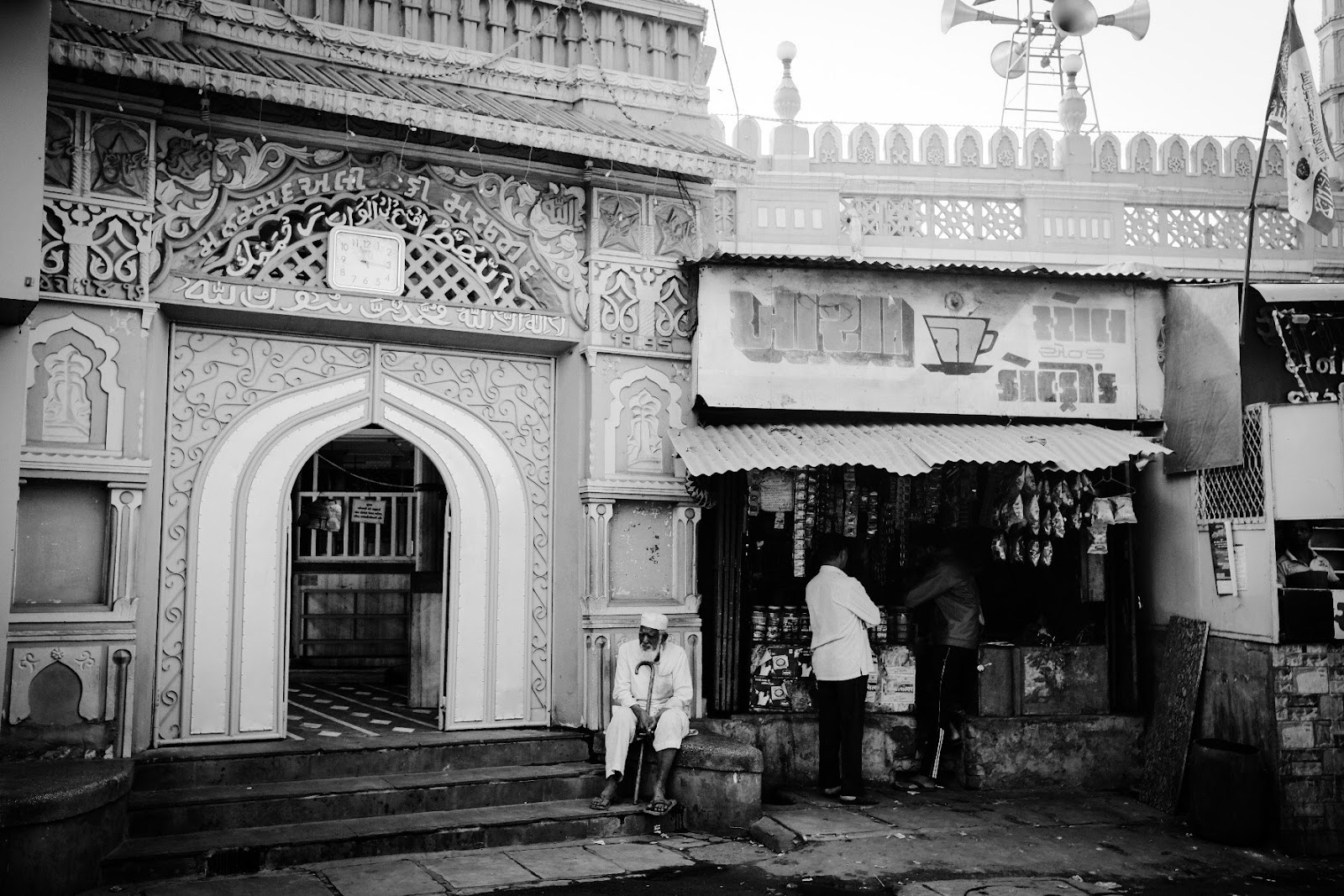 (A masjid in Jamalpur)

In Ahmedabad, the Jamalpur-Khadiya assembly constituency is a case in point. Jamalpur sticks out like a sore thumb in the Gujarat Model of Development story, completely at odds with the the glitzier parts of Ahmedabad. Small, run down dwellings dot either side of tiny, cramped lanes. “This a Muslim area,” our driver says, pointing out the obvious as a quick glance at this area’s inhabitants gives away its demography within milliseconds.

We stop at a tea stall, and a man dressed in pants and a shirt immediately comes up to us. Nawab bhai tells us that even though for 22 years the BJP has formed the government in Gujarat, this time around things might be different. “The Patels are angry,” he says.

There’s no question about it. This area is hopeful of a Congress victory. Three ladies making fresh rotis at a stall nearby chat with at length. “The BJP has a sitting MLA here, but this time the Congress has a good shot.” 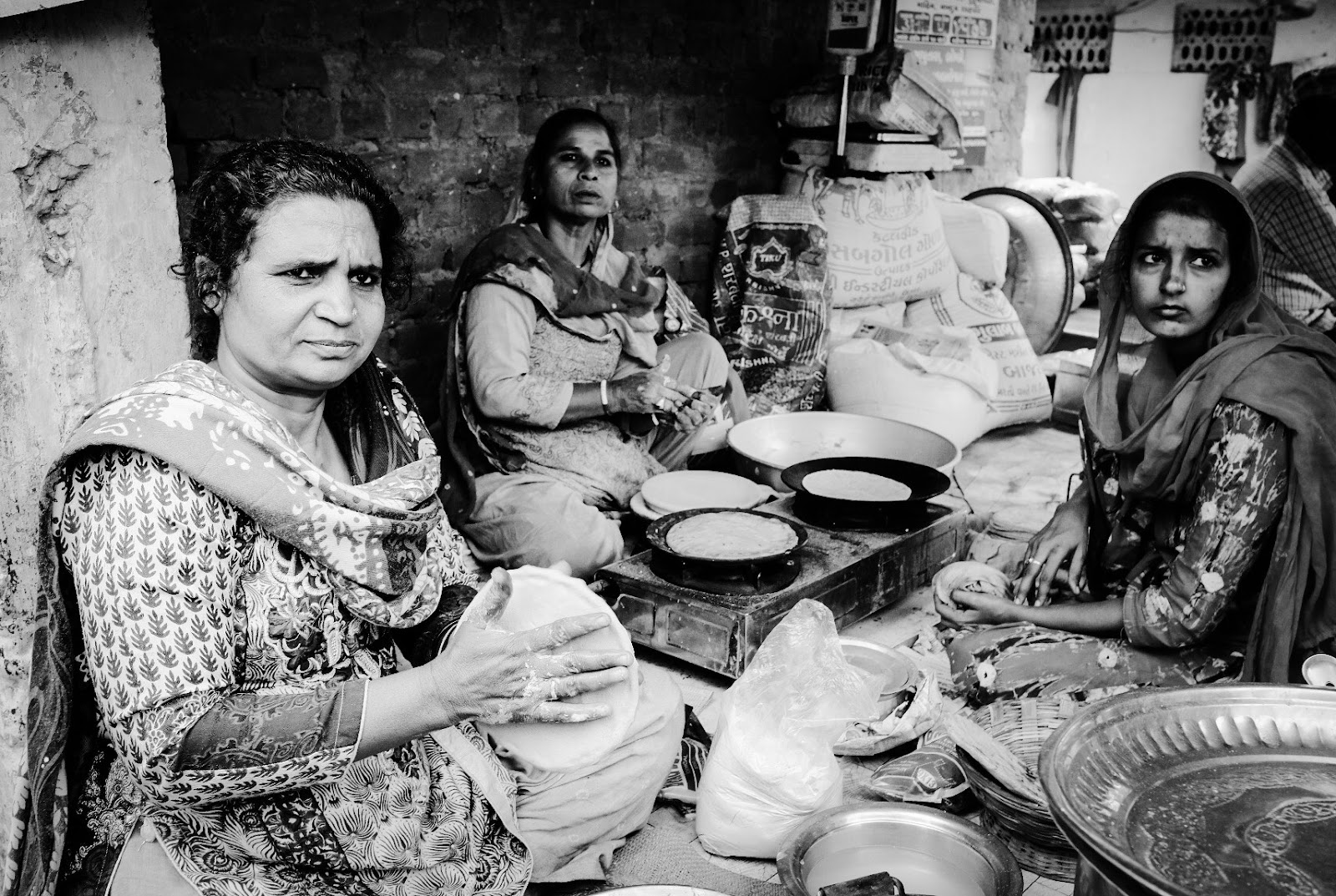 (Razia and her friends making fresh rotis in Jamalpur)

It turns out that Jamalpur used to be an assembly seat, but in 2008, it was combined with neighbouring Khadiya. Prior to delimitation, the area was a Congress stronghold, owing perhaps to its heavy Muslim representation. In 2012, Bhushan Bhatt of the BJP won from the Jamalpur-Khadiya seat, but this time, residents of Jamalpur think a Congress victory is possible. 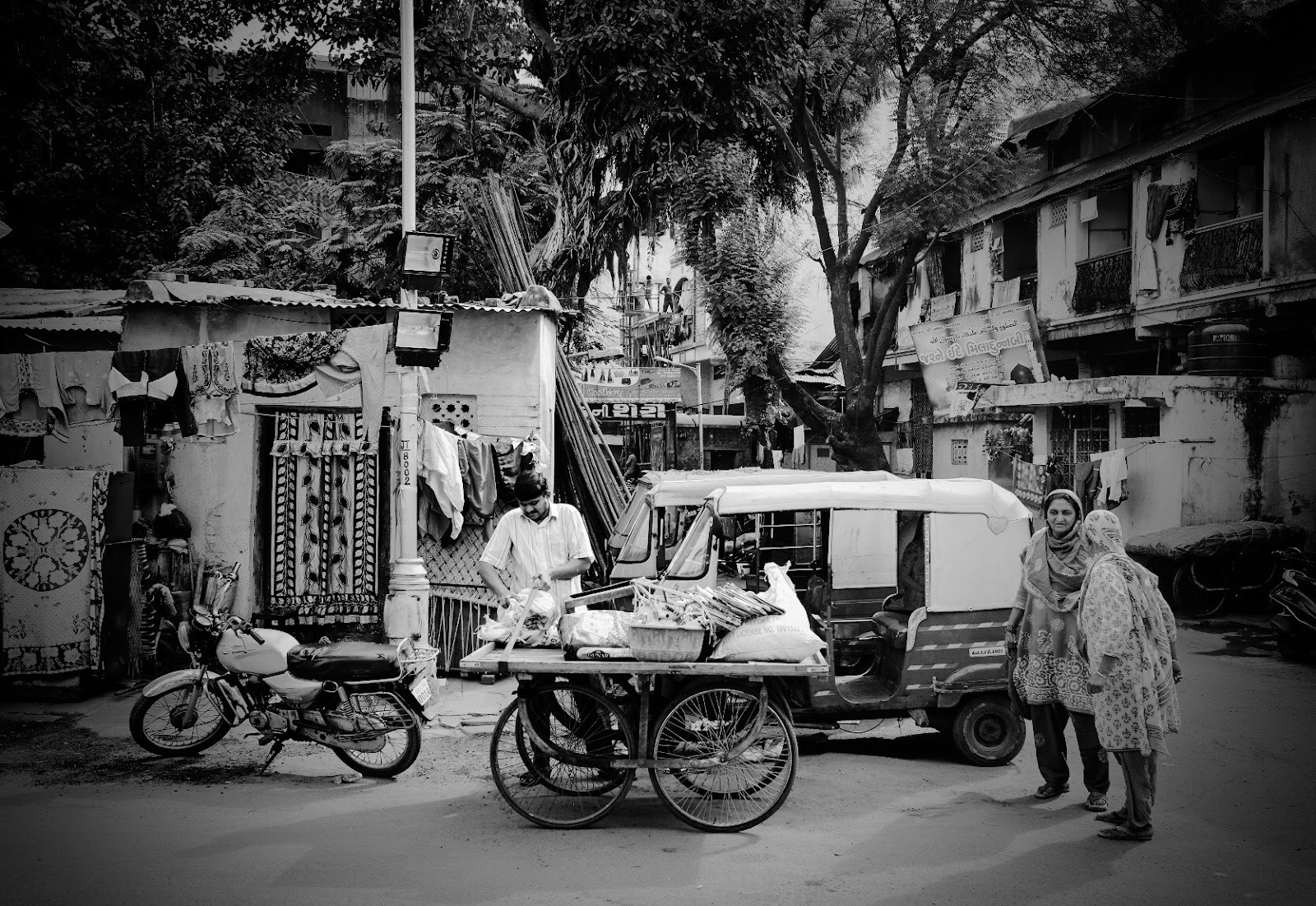 (The Congress office is located on this tiny road in Jamalpur)

At a Congress office located opposite a masjid in a tiny lane of Jamalpur, the office manager, Vijay, explains the scenario. “There were two Muslim candidates last time, so the vote got divided. This time there’s only one; Imran Khedawala is standing from the Congress.” “2012 was the first time the BJP won here, otherwise it’s always been Congress,” he said.

“What’s the cornerstone of the Congress campaign here?” we ask. By this time, a number of Congress workers had gathered in the cramped office. “It’s obvious isn’t it. The vikas (development) that the BJP goes on about isn’t at all visible here; we’re fighting for development.”

The Congress workers corroborate the assessment that communalism, this time around, isn’t working. “The BJP isn’t playing the communal card,” a worker says. “Any way, this area hasn’t seen rampant communalism.” 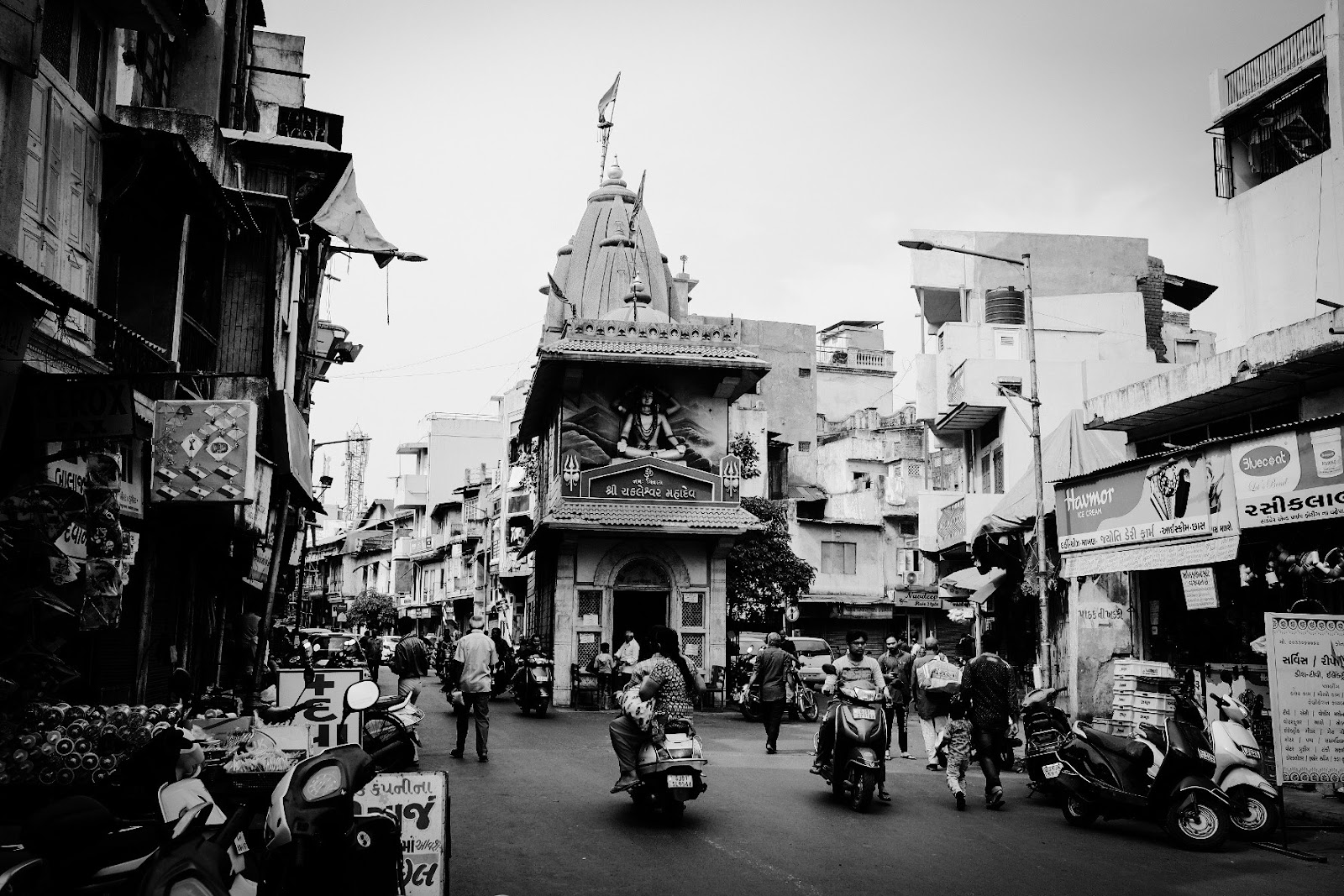 (In Khadiya, a temple stands tall)

In neighbouring Khadiya, the small bylanes gave way to a temple, and the small store fronts are adorned with religious emblems and figures. Bharat Patel runs a shop in the area, which was set up by his grandfather and has been around for 50 years. “There’s no communalism here,” Patel tells us, “but identities do form the basis of voting. This time the Patel vote is complicating things; it’s fractured in areas. There’s a level of resentment targeted at the BJP. Reservation was not given and there’s a protest vote that wants to teach the party a lesson.” “I will vote for the BJP,” Patel, however, offers in the end. “Bhatt is a good candidate.” 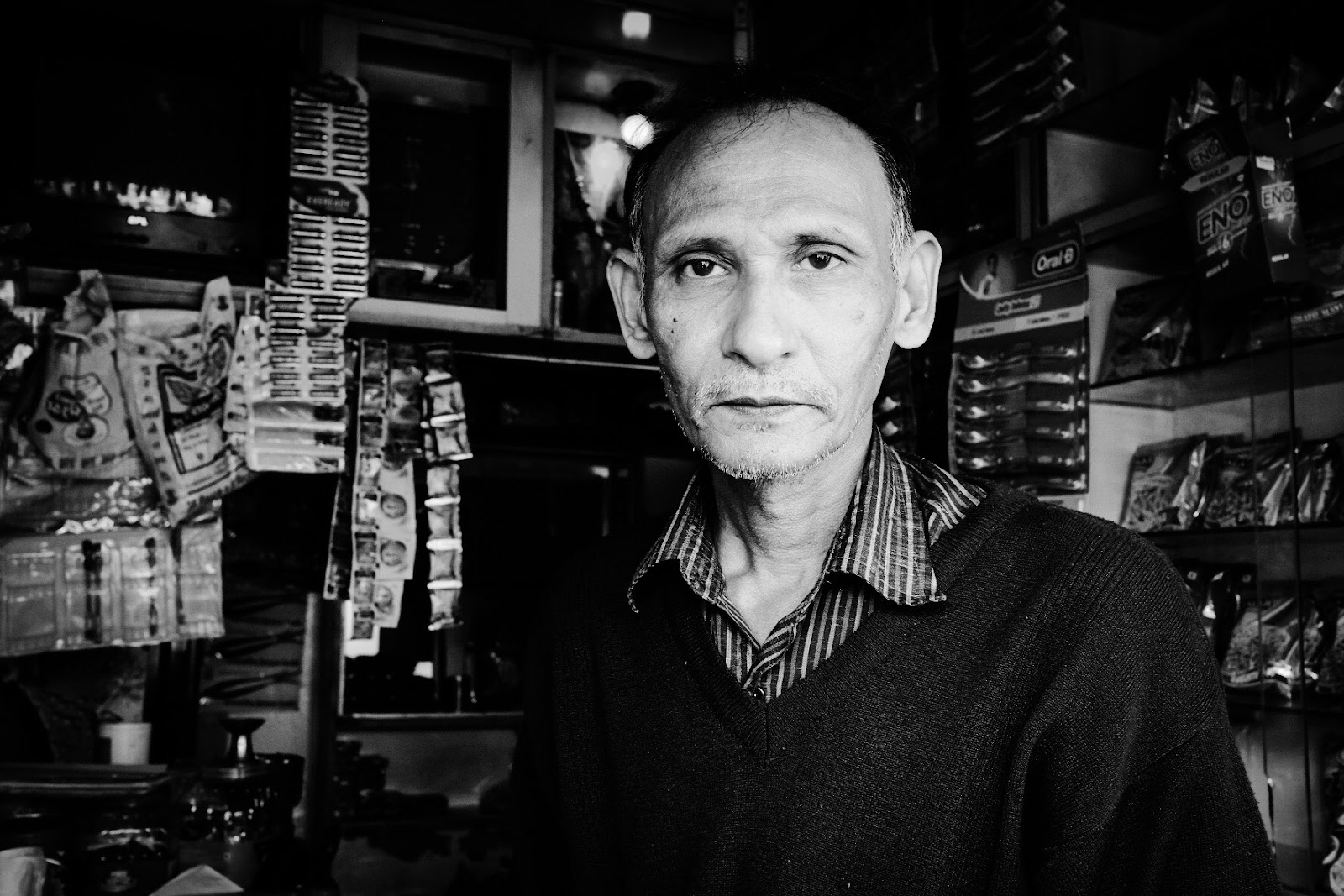 (Shopkeeper Bharat Patel speaks to us at length)

A few meters away, a group of men sit in what looks like an office space. “This is a BJP area,” they say. “There’s been a lot of development under the BJP. Gujarat is now a safe place; girls can walk around at night without worrying.” The men say that GST’s impact isn’t a factor “because no one understands GST.” “Generally, we all lead a comfortable life, so we have no complaints.”

The group, however, admits that the BJP might lose a few seats this election. “The Patel vote is divided,” they concur. “This might help the Congress a little bit.” “All this agitation, these andolans, they are part of the Congress plan,” one of the men says. “The BJP will win, but perhaps the Congress will do better than last time.” 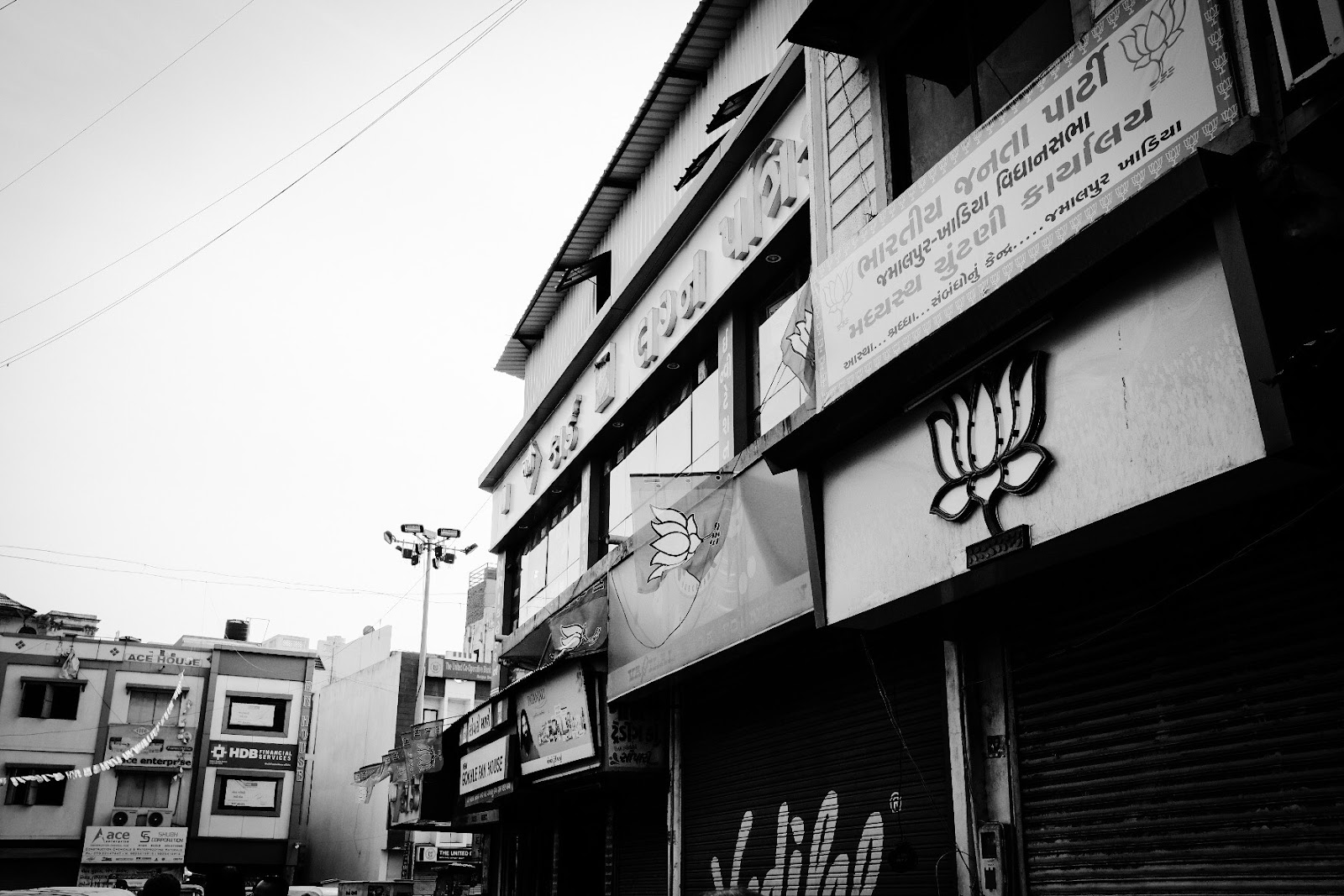 (BJP party flags are visible in every corner of Khadiya)

“Who knows what the exact numbers will be,” one of them concludes. “The Patidars are talking, but what they’ll do in the end, no one can guess. The final numbers will depend on how they vote.”

The men, wearing tikas and sitting in a bare space adorned only with posters of Hindu deities, say that communalism is not a factor. “Muslims, anyway, will vote for the Congress,” they say, in a comment that reiterates that deep segregation exists and identity based polling is the norm, but communalisation hasn’t taken hold this time around. 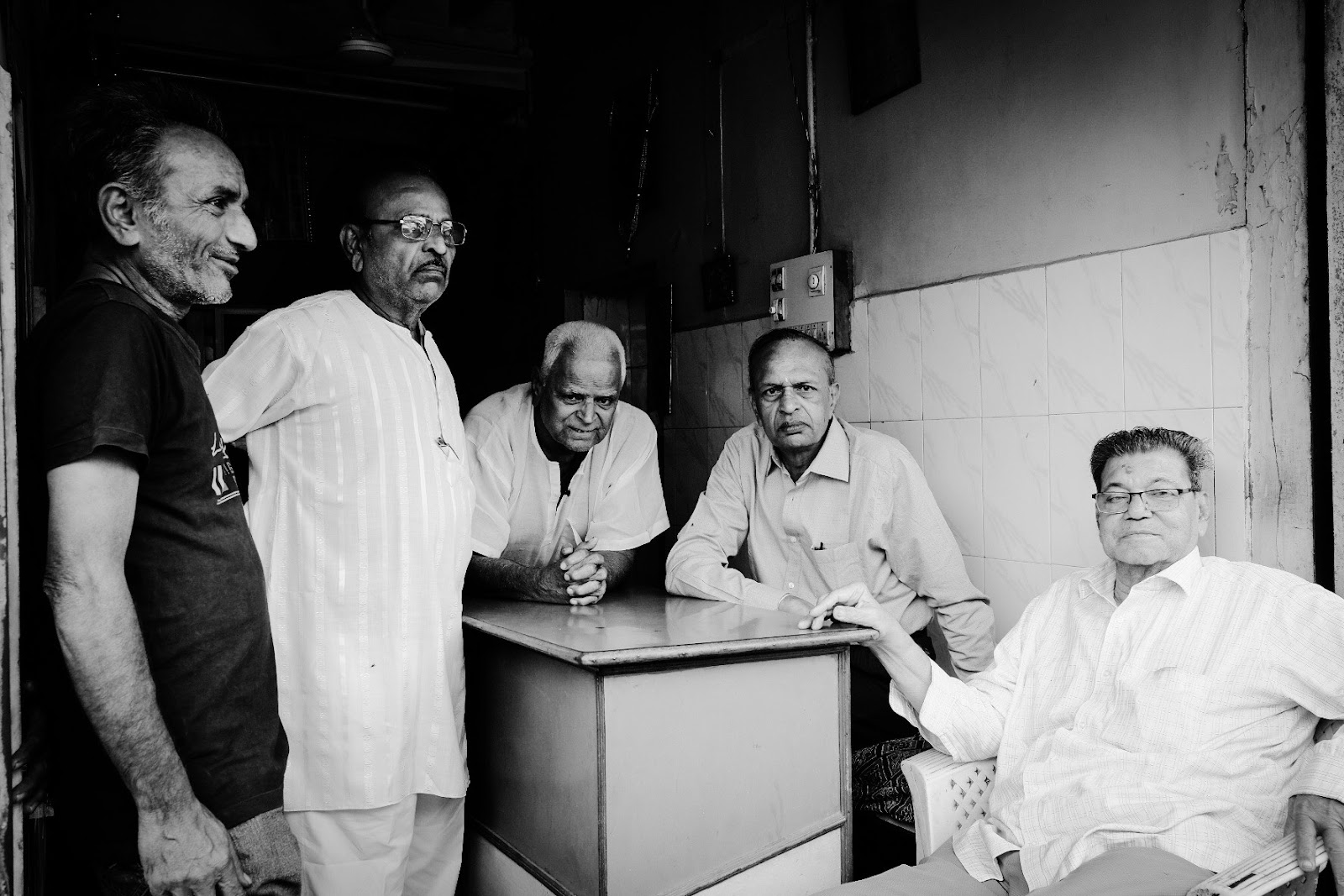 “Why will communalism work?” the activist friend later points out. “Segregation of society has been achieved in complete terms.” “In this area itself, you hardly see Muslims -- they are relegated to what people describe as ‘Muslim areas’. They are no longer a factor here.”

“Whatever be the reasons, we’re thrilled that communalism isn’t being employed this election; it’s a first in recent memory,” another colleague interjects. “Let’s hope it remains that way.”