'In Process of Making CDs, BJP Has Forgotten to Write the Manifesto":On Eve of Polls, Hardik Patel Holds His Own

GANDHINAGAR/MEHSANA: Hardik Patel’s meetings have been getting larger, cutting into the scepticism of the elder Patidars and consolidating the young. As well as the women who are turning out in large numbers as the video below shows, to listen to him, sex tape notwithstanding.

In a series of tweets he has dismissed the Mani Shankar Aiyer generated controversy over the term “neech” for the Prime Minister by pointing out that for this the Congress has taken action, but was it right when today’s PM as the Chief Minister used the term ‘bar girls’? 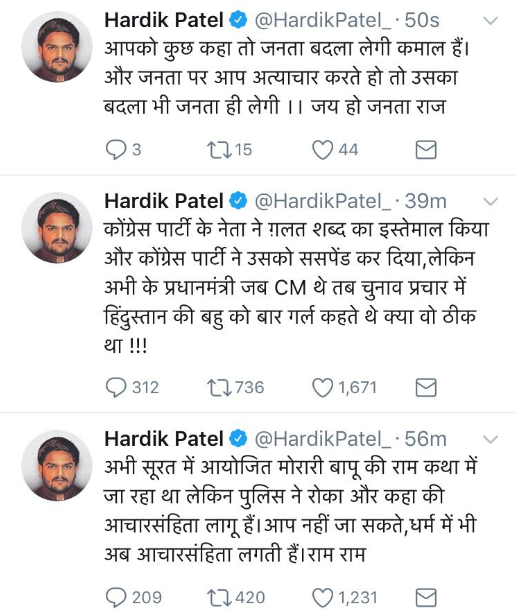 And gone on to question the BJP’s failure to come out with an election manifesto saying it was to busy making sex CDs and had forgotten to write the manifesto even though the voting of the first phase was tomorrow:

The BJP has not even come out with a vision document for these elections, as clearly it cannot do so without raising the issue of reservation and employment for the Paridars, and cannot do this without alienating other forward castes whose votes it is relying on. Hence the silence that has Hardik Patel and the other Opposition parties ridiculing the ruling dispensation that is so nervous about these polls that it is unable to “write” a manifesto as the 25 year old Patidar leader puts it.

The crowds are becoming increasingly responsive at Hardik Patel’s meetings with the Deputy Chief Minister of Gujarat Nitin Patel facing problems in Mehsana, his Assembly constituency. Nitin Patel had supported the agitation when it first began from Mehsana itself---a fact that the local Patidars remind you of constantly--- but has since had to ‘mend his ways’ as it were. The Patidar vote bank that has been hard core BJP is showing signs of strain now, with the youth behind Hardik Patel and the elders tending to follow. Rather than the other way around. If this happens, as RSS sources told The Citizen, this seat might be lost to the BJP.

In fact of the three younger leaders--Jignesh Mevani, Alpesh Thakor and himself--Hardik Patel seems to have played it best by staying away from the elections, not entering into an alliance with the BJP, and at the same time drumming up a campaign against the ruling party that creates the space for a pro-Congress vote by the Patidars. All over the Patels willing to ditch the BJP this election, said they had no problem voting for the Congress party as a “change” would be welcome.

Mevani is caught in a difficult election with little or no Congress support on the ground. Alpesh Thakor has tied his fortunes to the Congress party by joining it, although his vote bank is not averse to this move, as the Patidars would have been at this point. Hardik Patel is clearly on a wicket strong enough to joke about the sex video that ordinarily might have damaged him considerably, but in this election has not at all. Instead he has convinced the Patidars that he is with them first, with the little show of violence attacking the Congress party for giving wrong tickets going down well with the Patidar community in general. This was a demonstration for them that Hardik Patel would turn against the Congress party too, and his understanding was based entirely on its assurance that it would give the community reservation.

Interestingly, even those supporting Hardik Patel said fairly cynically that like the BJP, the Congress would not fulfil its election promise. But added that they were with Hardik Patel, and wanted to see whether the change might prove worth the while. RSS sources said that there was clear resentment against BJP president Amit Shah and the Chief Minister Vijay Rupani, although PM Modi remained a popular figure. However as two young Patidars Nirdesh Patel and Janak said, “we will vote against BJP in these elections and for Modi in the 2019 Lok Sabha polls.”

"This time,the BJP will not get en block votes of Patidars.This is not only because the BJP is opposing our reservation demands and the government policies are working against farmers. And most of Patidars are farmers," they said.