NEW DELHI: A young man’s mysterious death has prompted violence in Karnataka, spurred on by unconfirmed reports that claim that the death was communally motivated. Paresh Kamalakar Mesta was found in a lake in Honnavar Taluk, after being reported missing on December 6. Before the cause of death could be ascertained, fake news that claimed Mesta was tortured and killed because of his Hindu identity began doing the rounds. The BJP stepped in the say that Mesta was a “Hindu activist” killed by “jehadi elements.” The Congress retaliated by accusing the BJP of playing “politics of cadaver.”

Yesterday, violence spurred on by the incident spread to another town in Karnataka’s coastal Uttara Kannada district as the BJP sought an NIA probe. Violence was also reported from nearby Kumta, where an IGP’s car was set ablaze by protesters seeking justice for Mesta.

In the violence that’s ensued, facts have been replaced by unconfirmed news that have purposely painted the murder as a communal incident, saying that Paresh was targeted because he was a “Hindu activist”, tortured and mutilated. A fake news website went on to describe exactly how he was tortured, without citing any credible evidence or source to confirm how it acquired this information.

The news then spread on social media, including by BJP politicians who have termed the murder as “the handiwork of jehadi elements.” It was also circulated by prominent news channels, who repeated the canard that Mesta was “castrated”, and “flung into a lake,” his “head cut open.” “Boiling oil poured on his face,” was repeated by the mainstream media. A police report that debunks these claims was released, yet the fake news has continued to spread and gather steam…

A timeline of the events is as follows:

8 December: Allegations that Mesta was killed because of his identity as a ‘Hindu activist’ began appearing.

9 December: Unconfirmed reports saying “Boiling oil poured on his head, castrated, his head split open” began accompanying news of Mesta’s death on social media. No sources or evidence for the claims were provided.

11 December: The rumours were picked up by others, and were circulated widely on social media. 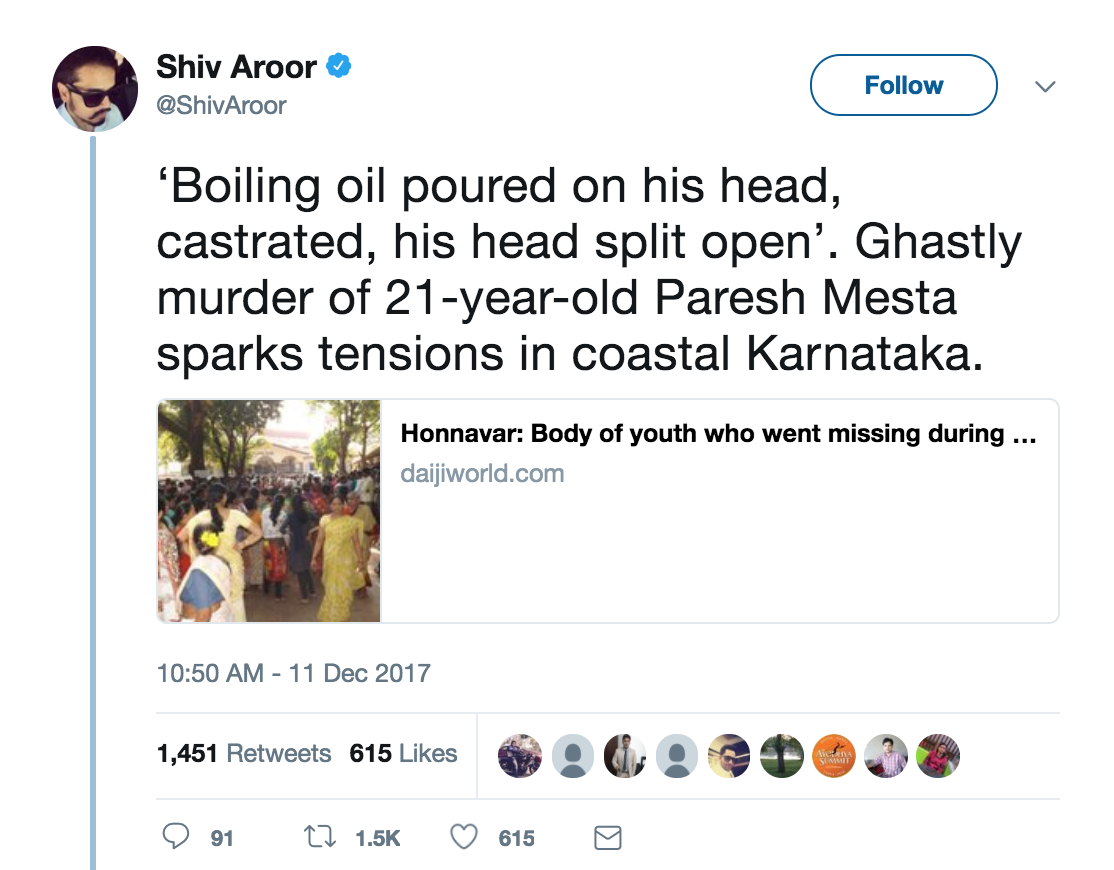 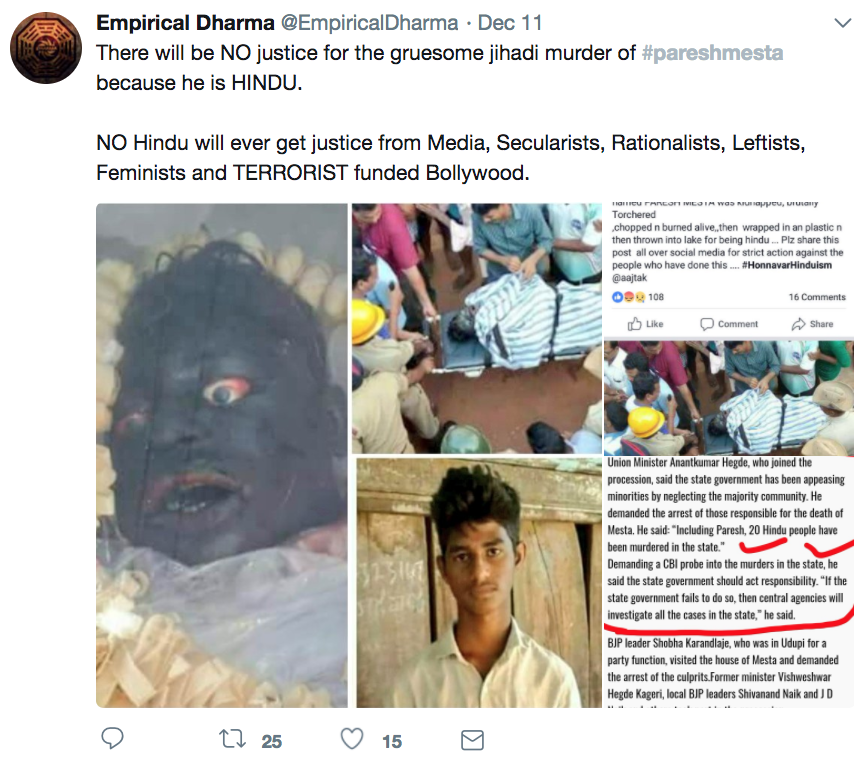 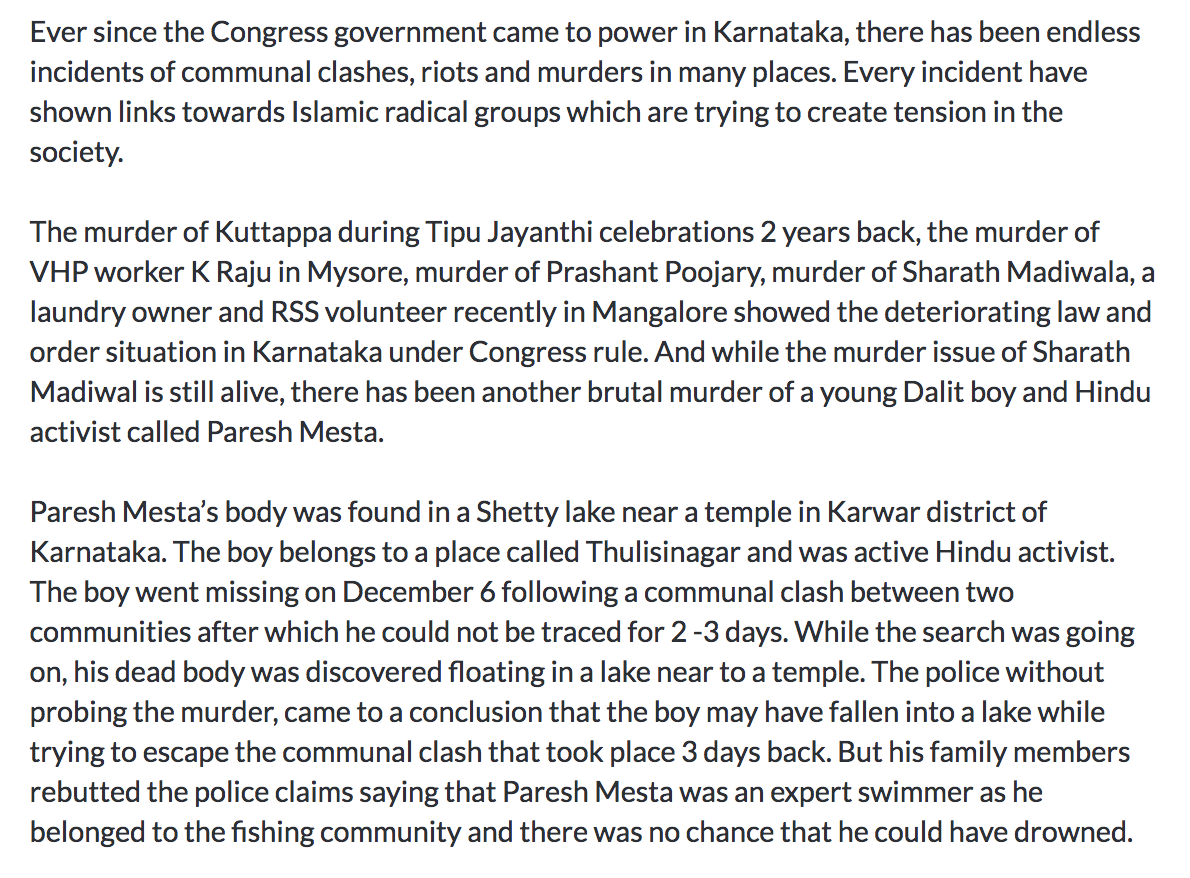 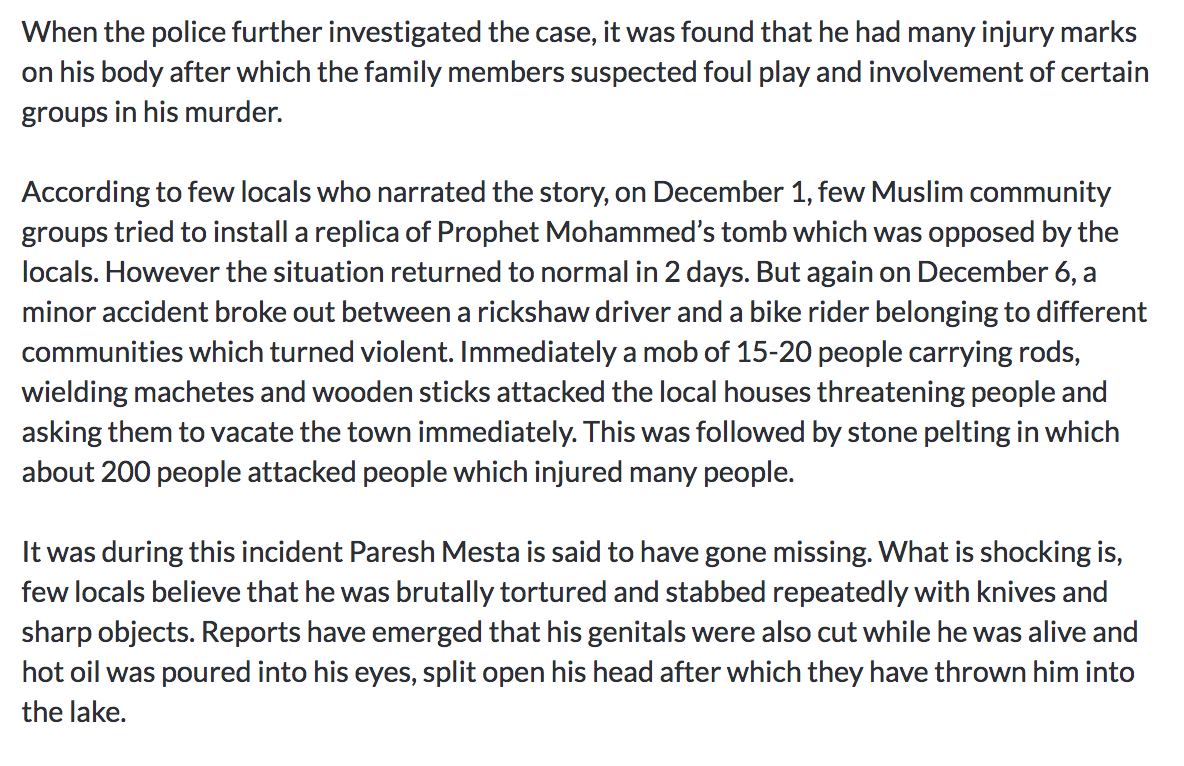 The Postcard News link was widely circulated on social media. 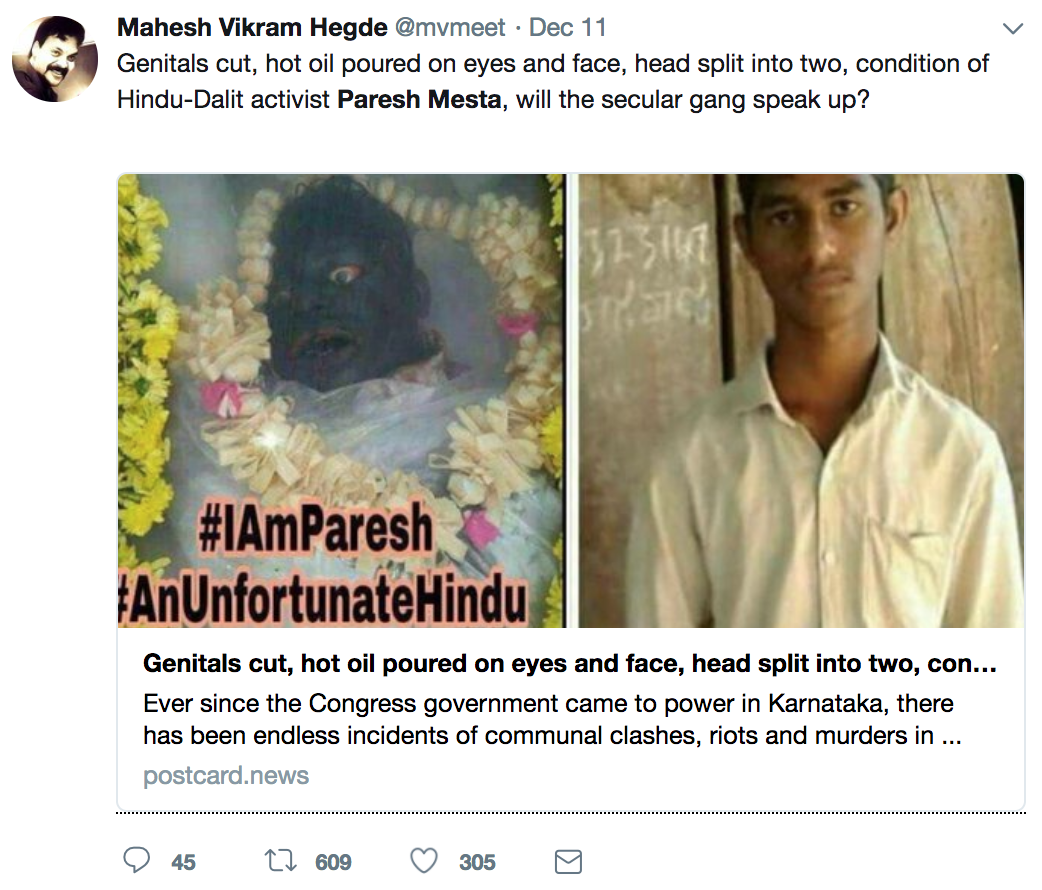 11 December: A mainstream media organisation used the fake news in a promo: 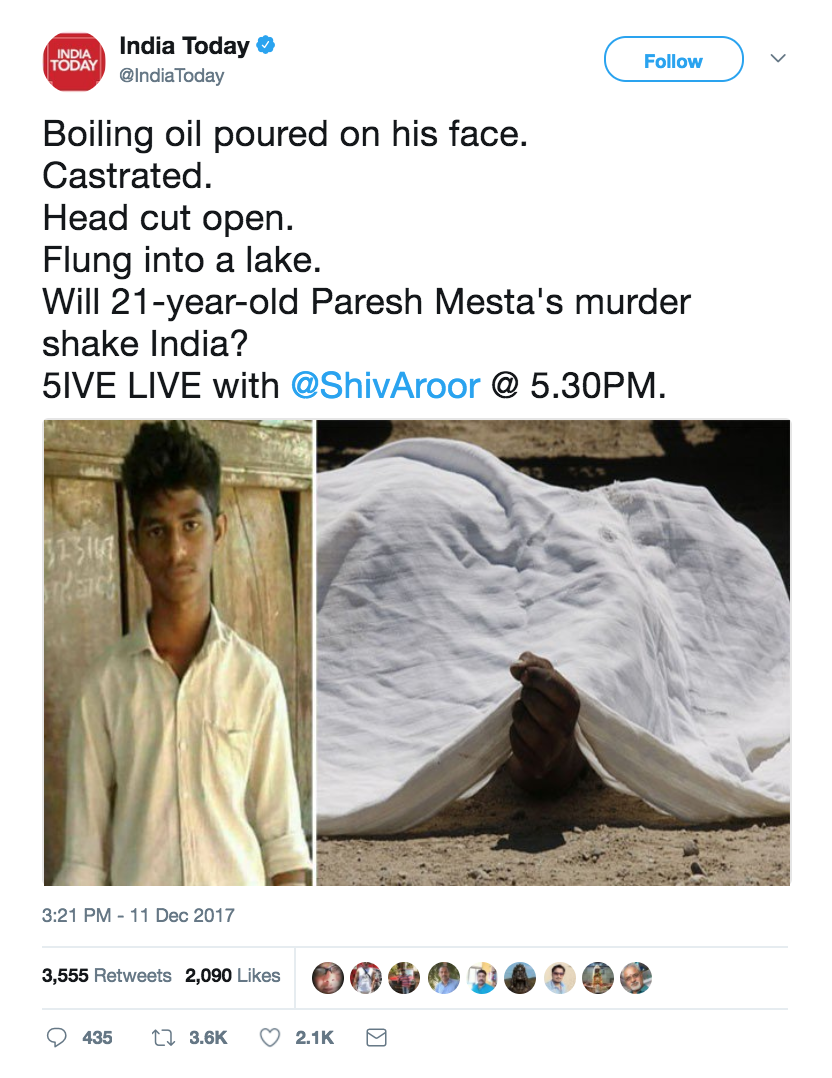 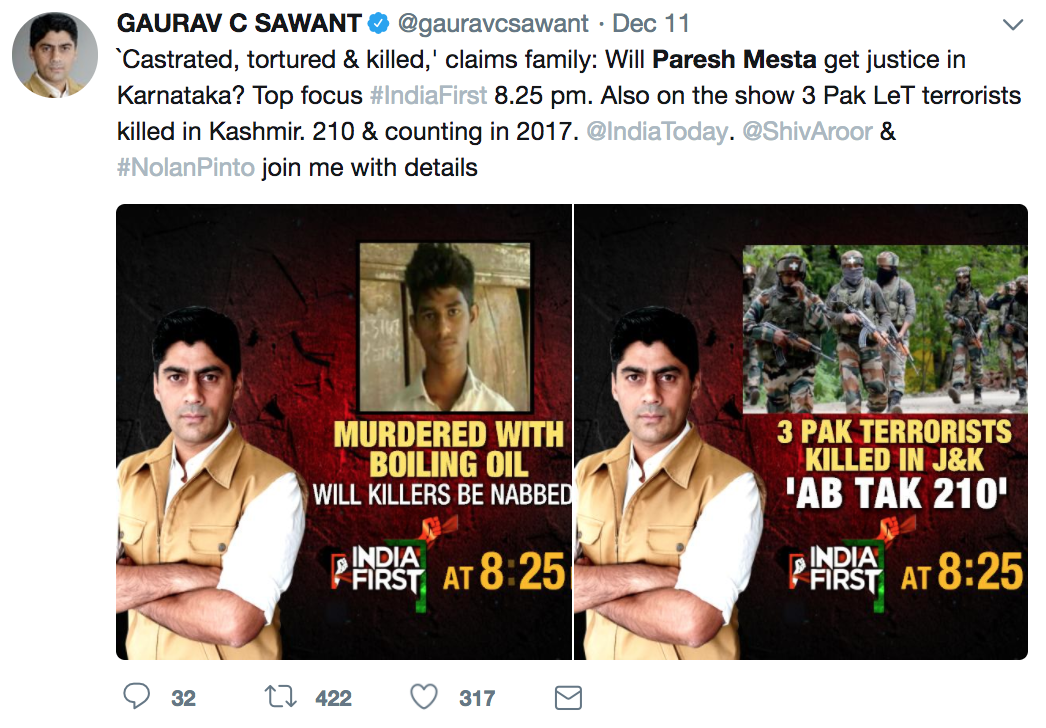 A photo with the caption “Murdered With Boiling Oil” was used despite any proof of the same.

11 December: The police released a report, which explicitly states that there was no evidence of injuries caused by weapons, no mutilation, nor any mention of hot oil being poured on the body. 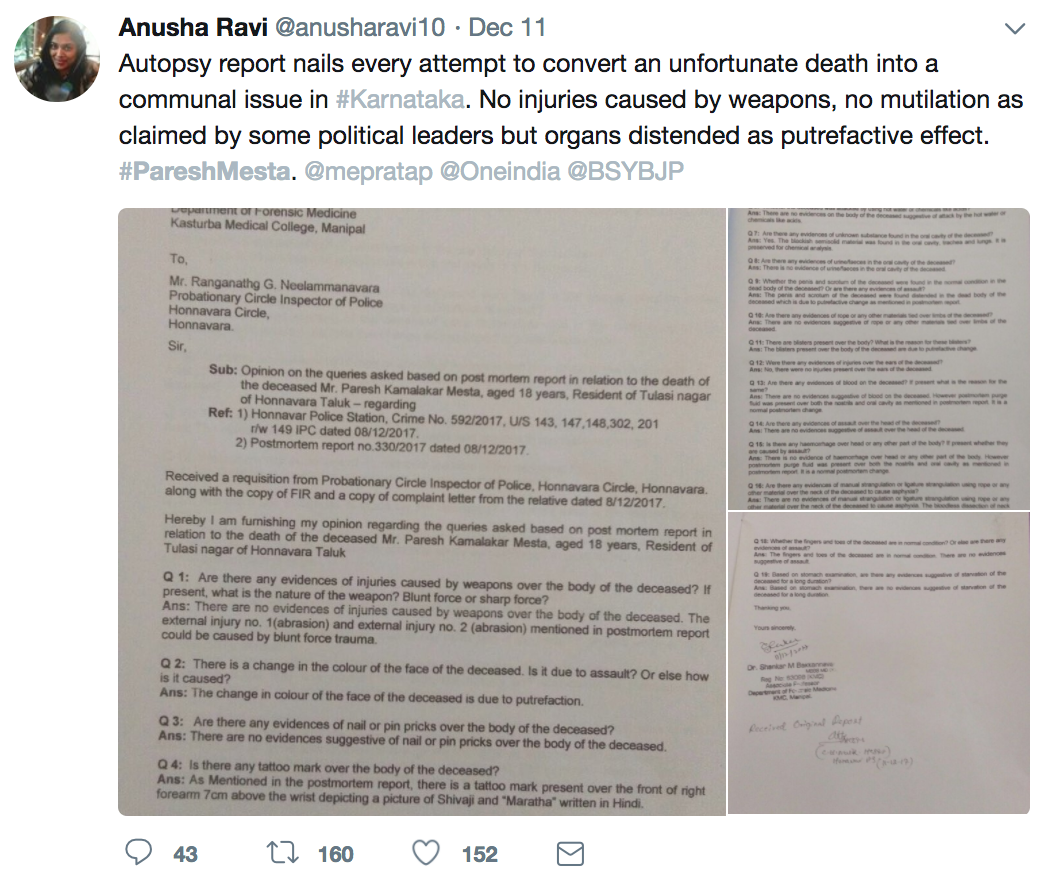 The police report is as follows: 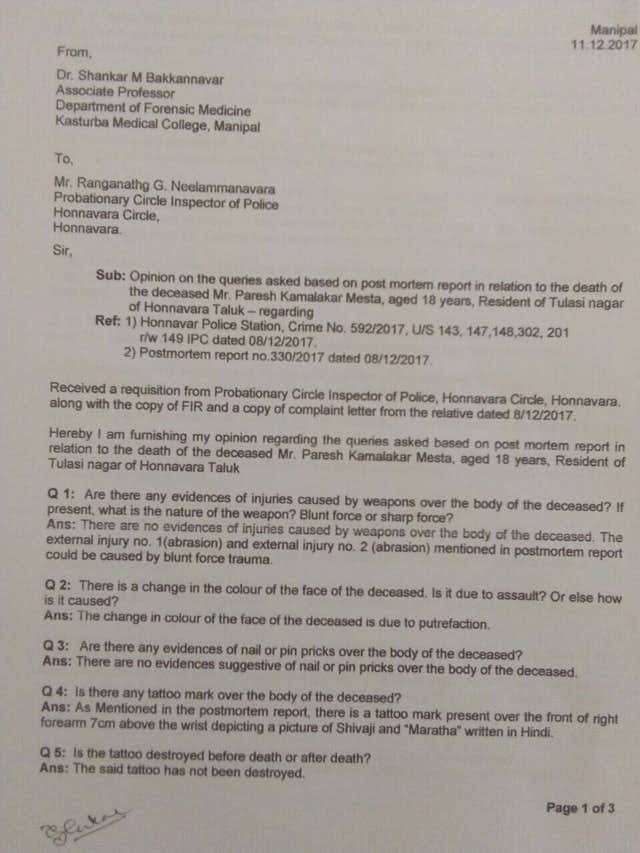 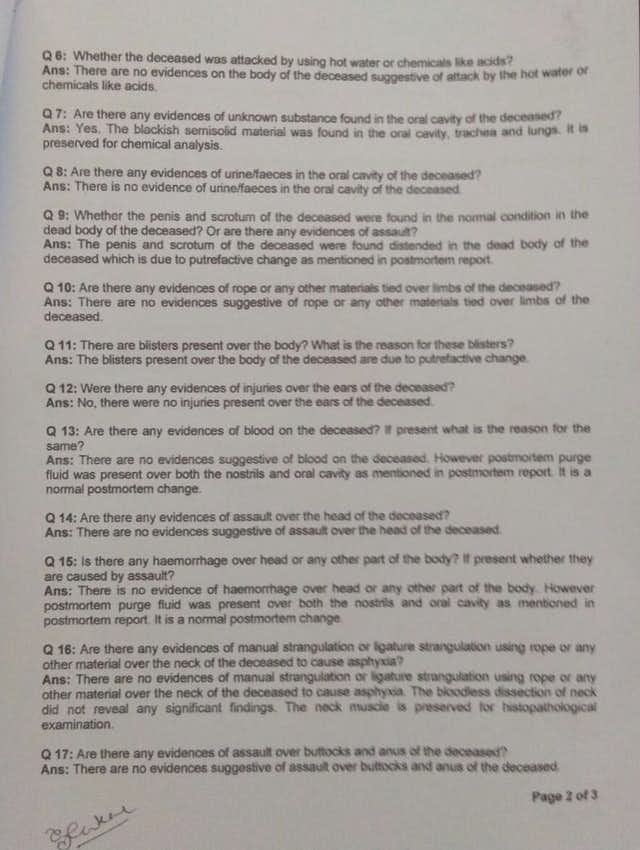 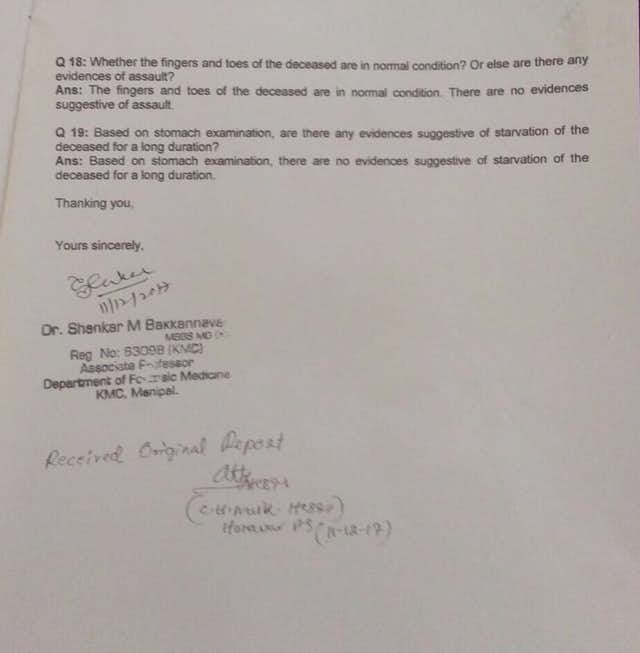 12 December: Despite the police report that debunked the claims, violence spurred to other parts of the district. Uttara Kannada remained tense as protesters gathered in Sirsi, bringing the town to a standstill.

“Siddaramaiah has been trying to shut down the murder case of Paresh Mesta, who was brutally murdered in Honnavar. That is why they have produced a report claiming that his death was normal and it was not a murder. The Bharatiya Janata Party has called for a bandh ... It is the people of the district who have gathered to force the government to reveal the truth behind Paresh Mesta’s death,” said Union Minister Anant Kumar Hegde, accusing Chief Minister Siddaramaiah of covering up the cause of death.

Meanwhile, BJP MLAs and MPs led by the Leader of Opposition in the Vidhana Parishad, KS Eshwarappa, carried out a march from Vidhana Soudha to Raj Bhavan. Eshwarappa alleged that police and doctors (involved in postmortem) had been “utilised” by the government to “close the case”.