Arrest Bhide, Ekbote For the Violence Against Dalits: Prakash Ambedkar

Maharashtra shuts down in protest against attack on Dalits

MUMBAI: It was as if it was a normal day. Bharipa Bahujan Mahasangh leader Prakash Ambedkar, sipping his morning cup of tea, had a conversation with The Citizen calm and totally unhurred despite being the main organiser of the Maharashtra bandh. In fact even as this is published reports from the state speak of success, with public transport off the roads in Mumbai, trains being stopped at different points in the state, with sporadic protests all over.

Ambedkar said that a host of Dalit organisations, Left mass organisations, as well as peoples groups had joined and supported his call for a state wide bandh after lakhs of Dalits, gathered around Bhima Koregaon near Pune to commemorate the 200th anniversary of the Battle of Koregaon were attacked, with a young adult killed on Monday. Within 24 hours the Dalits staged protests in Mumbai, Pune and other districts calling for action against the assailants, insisting they were targeted deliberately. 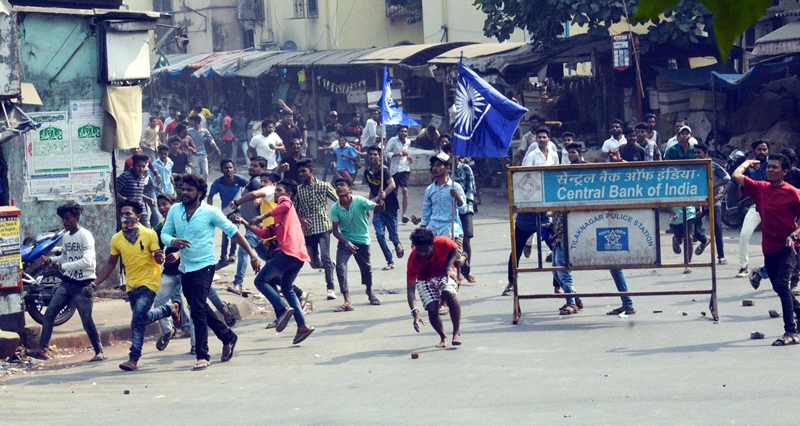 Ambedkar insisted that it was completely wrong to give this a Maratha versus Dalit hue, saying that this was being done deliberately by the BJP and the media. He said that the chief of the coordination committee for the event was retired Justice P.B.Sawant (former Chairperson of the Press Council) who had been elected by all the participating groups to coordinate the anniversary celebrations. He said that Sawant was himself from the Maratha community, and clearly this event held annually but with more gusto this year because of the 200th centenary attracted people of all communities.

Ambedkar said: “we are asking just one question of those who assaulted the people and pelted stones, why did you do this?” Asked if this was motivated, the Dalit leader hedged the question maintaining, “we are in the process of gathering the evidence and will speak once we have all the facts together.”

Ambedkar, however, made it clear that two persons were responsible for the present crisis and demanded immediate action against them. Sambhaji Bhide, 85 and Milind Ekbote, 56 are being charged by the Dalit groups of stirring this current phase of violence by desecrating a Samadhi of a Dalit icon in Pune. Both have a history of involvement in incidents of violence usually directed against the Muslim community.

Ambedkar said that the two should be arrested This incident, he said, was created and Chief Minister Devendra Fadnavis was merely trying to cover it all up. The Dalit leader was categorical that this was not a Maratha versus Dalit issue, but the result of a political conspiracy.

Local media reports point to the desecration of the samadhi of a Mahar Govind Gaikwad who is said to have performed the funer of Shivaji’s son Sambhajiraje Bhosale as no one wanted to do so for fear of incurring the then Mughal rulers wrath. Bhide and Ekbote have a problem with this, as they insist that the last rites were performed by the Marathas and not the Dalits. The reports suggest that December 29 was deliberately chosen to desecrate the samadhi situated in village Wadha, Pune district as they were fully aware that thousands of Dalits would be gathering at Bhima Koregaon over the next couple of days.

A procession of right wing activists then reportedly attacked the Dalits in Bhima Koregaon. A FIR has been registered against the two, but they have not been arrested. Prime Minister Narendra Modi has visited the residence of Bhide in Sangli. Ekbote is from the RSS and was a BJP corporator.

Ambedkar said that the one question he wanted to ask these men was: why did you attack the Dalits gathered peacefully for their celebrations? And wanted the government to answer: why have you not arrested Bhide and Ekbote till now?