NEW DELHI: Jignesh Mevani, slapped with FIRs for a protest he did not attend in Pune, appeared before the media in Delhi for a quick, short press conference. The questions too were crisp with the newly elected MLA from Gujarat receiving a ‘kind’ press as it were, without the haranguing that the Delhi media is capable of.

Mevani made it clear that he was being targeted because he had won the elections, and the BJP was worried about him in the run up to the general elections in 2019. He denied being part of the Pune demonstration where the Dalits had been allegedly attacked for celebrating the 200th anniversary of the Bhima Koregaon battle, after which the protesters were attacked and a young adult killed.

Mevani asked ‘do the Dalits in India have no rights to put forward their demands through a peaceful protest, abiding by the law as per the Constitution? He mentioned Rohit Vemula’s institutional murder, the Una movement and the Shaharanpur violence questioning the Prime Minister’s stand and his silence on the same.

Mevani, hitting hard and mincing no words in countering the “propaganda” against him raised three questions directly for Prime Minister Narendra Modi during the course of his press conference:

1. Why are you silent on the caste violence in Maharashtra?

2. Can Dalits no longer rally peacefully in the country without being attacked?

3. What are you following Manusmriti or the Constitution of India? 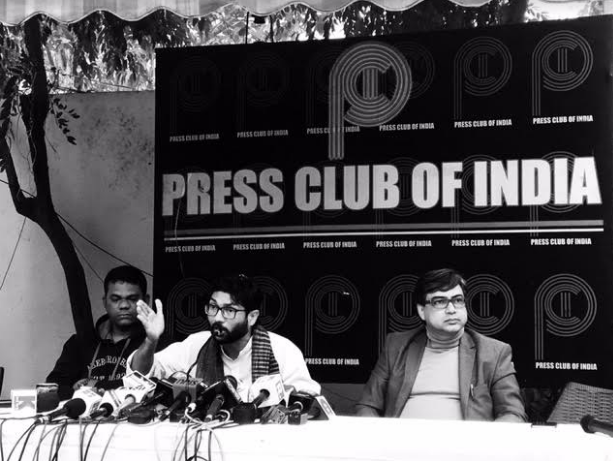 Jignesh Mevani questioned the Prime Minister’s stance on the Uttar Pradesh government’s arbitrary stand on keeping Dalit rights activist, Chandrashekher Azad in preventive detention. He stated the importance of annihilation of caste with ‘it's time the Central government ends the age old oppressive practise of caste discrimination and formulates policies to uplift the status of the marginalized, in India’.

Mevani spoke of how he is being targeted by the present government, even after he significantly clarified that his speeches were not provocative or incendiary. He requested the citizens to have a look at his speeches posted on social media platforms. To PM Narendra Modi, he said ‘you can go ahead with your communal politics, but we will face you in the 2019 elections. We follow Ambedkarite politics and will continue our movement’.

Mevani ended the press conference by openly inviting every citizen of the country to be a part of the protest march on January 9, 2018 on Parliament Street.