Shyam Divan, counsel for S.G Vombatkere ( one of the petitioners) opened the hearing with a strong argument against Aadhaar based on privacy and the rights of a citizen under the Constitution of India.

Divan said ‘’The petitioners are certain that if the Aadhaar Act and programme is allowed to operate unimpeded it will hollow out the Constitution, particularly the great rights and liberties it assures to citizens.’’

The Constitution balances rights of individuals against State interest. Aadhaar completely upsets this balance and skews the relationship between the citizen and the State, enabling the State to totally dominate the individual. The Constitution of India is not a charter of servitude. Aadhaar, if allowed to roll out unimpeded reduces citizens to servitude, he argued. 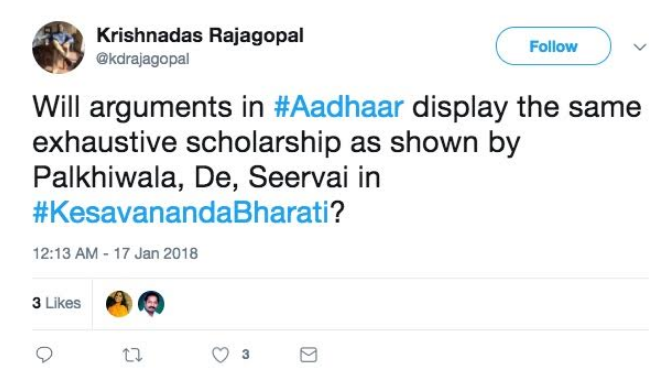 - whether Aadhaar conflicts with the Constitution and the rule of law

- whether the vulnerability of the Aadhaar database compromises national security

The case for the abolition of Aadhaar made out in the opening statement before the Supreme Court today is:

- The case is unique. No democratic society has adopted such a program. Closest foreign cases have all been decided in favour of the citize, repelling the invasive program by the state;

- The new technology is not beneficial, statute and material discredits governments tall claims;

- If allowed it will hollow out the Constitution, rights and liberities it ensures to the citizens;

- The threat here is far more insidious. We do not have a frontal attack on the Constitution by amending it. Instead, through a succession of marketing stratagems and by employing smoke and mirrors, the government has rolled out a little understood programme that seeks to tether every resident of India to an electronic leash. This leash is connected to a central data base that is designed to track transactions across the life of the citizen. This record will enable the State to profile citizens, track theirmovements, assess their habits and silently influence their behaviour. 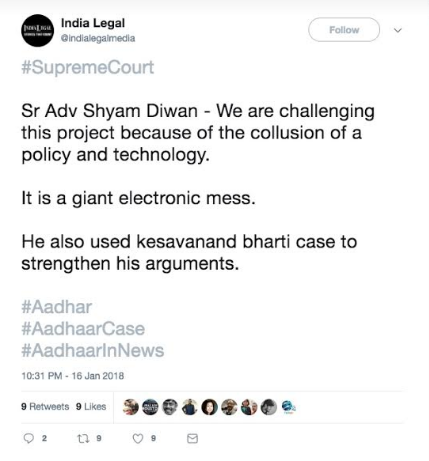 Several State governments have started using the Aadhaar platform to build profiles of residents that is reminiscent of totalitarian regimes.

- At its core, Aadhaar alters the relationship between the citizen and the State. It diminishes the status of the citizen. Rights freely exercised, liberties freely enjoyed, entitlements granted by the Constitution and laws are all made conditional. Conditional on a compulsory barter. Unless the number is seeded in databases of the service provider, the citizen is denied access to these most essential facilities. Inalienable and natural rights are dependent on a compulsory exaction.

- The State is empowered with a ‘switch’ by which it can cause the civil death of an individual. Where every basic facility is linked to Aadhaar and one cannot live in society without an Aadhaar number, the switching off of Aadhaar completely destroys the individual.

- Could it ever be envisaged that under this Constitution which ‘We the People’ have fashioned after a long freedom struggle steeped in sacrifice, the State can arrogate to itself so much power that it can ‘extinguish’ a citizen or be willfully blind with respect to a citizen who would like to identify himself in a manner other than Aadhaar? 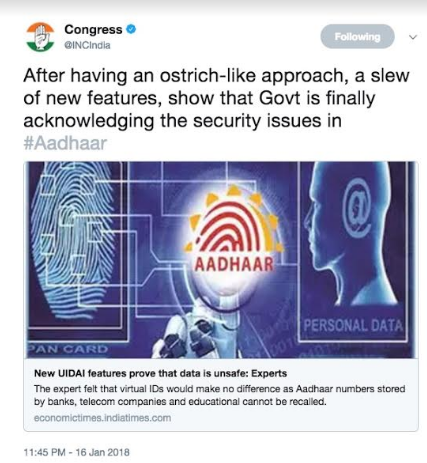 Following this the questions that the petitioner against Aadhaar raised today were:

1. Does the Constitution of India sanction the creation of a surveillance state and surveillance society where routine andregular every day transactions are recorded by the State;

2. Whether the personal autonomy of Indians extends tobiometrics such as finger prints and iris scans and consequently whether citizens of India can be required to use their bodies as markers wherever demanded;

3. Whether the Rule of Law, a basic feature of the Indian Constitution mandates that where demographic and biometric information is collected from citizens at the instance of the State, the exercise is (i) backed by law, (ii) carried out by government alone having regard to the verysensitive and personal nature of the information, (iii) preceded by a meaningful process of securing informed consent. Whether the Aadhaar project conflicts with the Rule of Law and constitutionalism?

4. Is the Aadhaar Act, 2016 a validly enacted law, having been passed as a Money Bill?

5. Whether the right to privacy guaranteed under Part III of the Constitution, especially dimensions such as ‘the right to be let alone’ and ‘the right to be forgotten’, entitle a citizen toprotect her personal identity, her movements, her social interactions, etc., without being forced to part with personal information to the State and without being forced to embed her information with government departments and private entities?

6. Whether in a democracy, the citizen has a choice for establishing her identity.

7. Whether the coercive power of the State under the Aadhaar project can extend to children?

8. Whether in a digital world the right to personal autonomy extends to informational self-determination? Whether anindividual can protect herself by controlling the information she chooses to put out?

9. Whether the vulnerability of the Aadhaar database compromises national security?