NEW DELHI: Gem dealer Nirav Modi who is supposed to have fled the country before an FIR issued against him on January 31 a la Vijay Mallya, surfaced at Davos to meet with Prime Minister Narendra Modi. A photograph of him and others with his namesake is now in wide circulation.

How? Ask Congress President Rahul Gandhi and CPI(M) General Secretary Sitaram Yechury, with the government silent, even as Nirav Modi’s residences and offices are being raided, and sealed for a Rs 11, 363 crore fraud in which he and others were helped by the Punjab National Bank to get loans without guarantees.

Nirav Modi,48, a Gujarati enterpreneur, has blazed a trail from politicians to celebrities in Bollywood to brands across the world with his Firestar Diamond. His dream of a global empire was moving ahead at break neck speed with models sashaying on the ramps in his diamonds, even as Modi broke new ground through Christie’s auctions and tie ups with global multinationals. Modi’s rise has been phenomenal and clearly protected as the huge fraud involving taxpapers money in PNB demonstrates.

As the Opposition leaders point out, PM Modi controls who he is seen with let alone photographed with so clearly Nirav Modi is a favoured individual. He is seen grinning in the first line standing behind the seated Prime Minister, fourth from the left, clearly a part of the business Who’s Who. This despite the fact that the jeweller has been under Enforcement Directorate investigation since last year for a lesser Rs 280 crore scam. 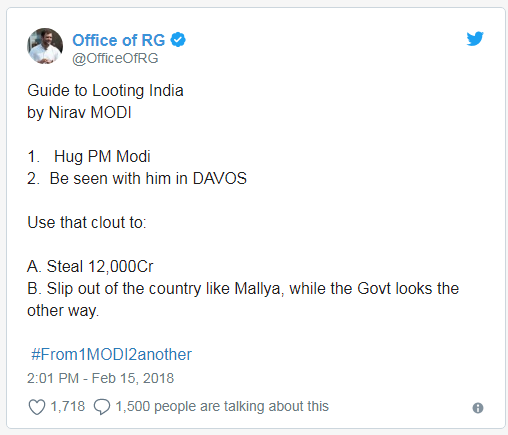 “Is it possible to believe that he or vijay mallya left the country without active connivance of BJP govt?”

PNB bank has appealed to the media for some more time, maintaining that the fraud has become known because of its own internal probe. PNB Managing Director Sunil Mehta said., “we dteced the fraud on January 3. We got to know that two of our employees did some un-authorised transactions. The bank initiated criminal action against our staff members.”

Modi also got wind of this and left the country well before the January 31 FIR. He met PM and posed for photographs with him in Davos a week before the FIR and now the subsequent raids. Sources said that Modi has given a power of attorney to a Non Resident Indian to deal with the scam. He has offered to return Rs 5000 crores it is learnt. Nine properties are being searched, the list including Nirav Modi's home in Mumbai's Kurla, his jewellery boutique in Kala Ghoda, and showrooms in Chanakyapuri and Defence Colony in Delhi.

The modus operandi was simple: Nirav Modi basically worked with bank officials to illegally obtain Letters of Undertaking, which were then cashed overseas from different banks, in both the public and private sector. The CBI has been told that 8 such letters were issued to the billionaire in January, and were not entered in the books so as to allow buyers credit for making payments to overseas suppliers. Modi not satisfied with this, asked for a fresh loan but since the officers who had helped them earlier ---and this is the bank version---had retired PNB insisted on guarantees for these Letters of Understanding. This is when the investigation that has now led PNB to squeal started.

Significantly, this scam has followed that of Winsome Diamond fraud case with a three year CBI enquiry into owner Jatin Mehta ending just last year. With not a penny recovered since. In an almost similar case as the PNB scam, the amount involved was Rs 6500 crores with the intention to take the money out of the country or divert it to other projects. Winsome Group, again into diamond trading, had accumulated defaults of Rs 6581 crore on loans from a consortium of 15 public sector banks, that included the Punjab National Bank as well. No money has been recovered despite the guilt being reportedly established by the CBI enquiry.

All India Bank Employees Association leader Devidas Ramchandra Tuljapurkar said that there was clear complicity by the entire system in this fraud. As he pointed out there was no way this level of fraud could have been fixed and gone undetected by the annual and monthly audits, bother external and internal, that are carried out on a regular established basis. Either there is political complicity, Tuljapurkar told The Citizen, or there is a major fault in the system for which the Reserve Bank of India is responsible. There is a systematic failure, a major lapse as this fraud has gone undetected despite the regular financial scrutiny for seven years, he pointed out.

Tulkapurkar, referring to the Winsome scam wondered how the system had remained so apathetic and not addressed the loopholes that led to the fraud. As Tuljapurkar said the taxpayer has been hit yet again as it is their money that has been used for nefarious ends, for funding and that too totally illegally a billionaire with every rule in the book violated. In effect the capital given to PNB under the recapitalisation scheme of the government has now gone into lacing the coffers of a big private high roller in the gem industry.

Three men guilty of big fraud but with close political links that matter have escaped the law of India, and found sanctuary abroad. Lalit Modi with a fraud of Rs 7000 crores, followed by Vijay Mallya with Rs 9000 crores and now Nirav Modi with Rs 11,400 crores have escaped the dragnet with total ease. As Tulkapurkar said, “the BJP blames the Congress, the Congress blames the BJP but in the end the taxpayer suffers as does the country.” These men have all got away.