NEW DELHI: It pays to be connected. To money and power. Nirav and Neeshal Modi’s phenomenal rise in the diamond industry is a direct consequence of their political and top business contacts and relationships that catapulted into a world of high glitz with US President Donald Trump inaugurating their showrooms (before he was elected) and world celebrities amongst their clients.

Except for an unconvincing attempt by two unrelated Ministers to defend the fraud by basically trying to turn the tables on the Congress, the top leaders are completely silent. Prime Minister Narendra Modi despite speaking in Mumbai recently did not refer to the Rs 11,400 crore fraud, and Finance Minister Arun Jaitley normally vocal has had nothing to say even in his famous off the record sessions. The Reserve Bank of India has fallen completely silent as if this will make it invisible.

Why? Because the connections are too deep?

Nirav, a Wharton Business School dropout, joined his maternal uncle Mehul Choksi in the diamond business in Gujarat. Choksi had good connections with PM Narendra Modi. The Congress party has released a 2015 video clip where Prime Minister Narendra Modi is seen laughing refering to “mere bhai Mehul ji yahan hain” while addressing a meeting on the Gold Monetization Scheme. The event, which took place on November 5, 2015, and PM Modi said, "People should take advantage of the golden opportunity to help India march to a golden period.A buyer will go to the biggest showroom to buy jewellery but will get it checked by his family jeweller.Our Mehul Bhai is sitting here. He would know, the buyer would go to his own jeweller to get it checked (the last with a light laugh).” 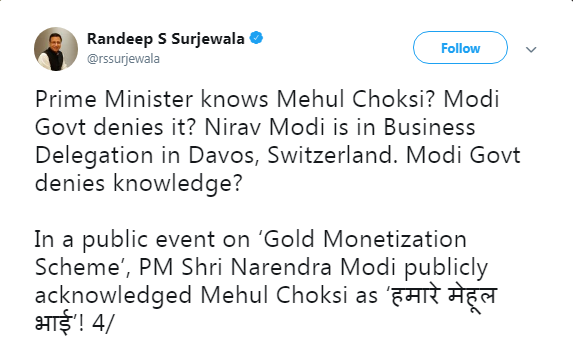 In 2010 Modi got his big break. His international moment so to speak where his pink and colourless diamond creation got him on to the cover of a Christie’s catalogue, and was sold for a record $3.56 million at an auction in Hong Kong. Two years later, in 2012 Modi;s Riviera Diamond necklace got him $5.1 million at a Sotheby’s auction, and placed him firmly on the global map. He has never looked behind, and in 2014 was placed on the worlds billionaires list by Forbes.

Nirav Modi became part of the very important people of the world, opening showrooms across the globe, dressing celebrities, and wining and dining with the Who’s Who of western capitals. He remained lowkey in India, but was well known in the closed and secretive diamond community of Gujarat, and the business cronies of India of course. In 2016---by then his business was booming, Nirav Modi hosted a big bash in Jodhpur’s Umaid Bhavan, with industrialists, businessmen, celebrities specially flown in from different parts of the world, all part of the guest list.

The video below gives an idea of the bash, quite beyond the imagination of the taxpayers with accounts in Punjab National Bank

His brother Neeshal married the granddaughter of Dhirubhai Ambani. She is the daugher of Mukesh and Anil Ambani’s sister. Mukesh Ambani threw a huge party for them, and the connections remain deep and tested.The Ambani’s have tentacles that reach deep into government corridors and political parties. With the big media being a direct---or indirect---beneficiary as well. By conservative estimates the Ambanis are amongst the best connected business families of India, with one or the other brother usually part of a Prime Minister’s business entourage, regardless of political party.

Nirav Modi, as is now widely known got wind of the trouble before the trouble hit him and quietly fled the country with his entire family. He appeared at Davos---a week before the FIR was filed---to meet and be photographed with Prime Minister Narendra Modi and other special guests. The photograph was released at that time by the government of India as part of the PMs visit coverage. The FIR against Modi and the others was filed a week later, on January 31, 2018.

In midst all these landmarks of a huge success story Nirav and Neeshal Modi used the Letter of Understanding scheme to draw guarantees from the Punjab National Bank over and over again. The 2017 records of PNB show: 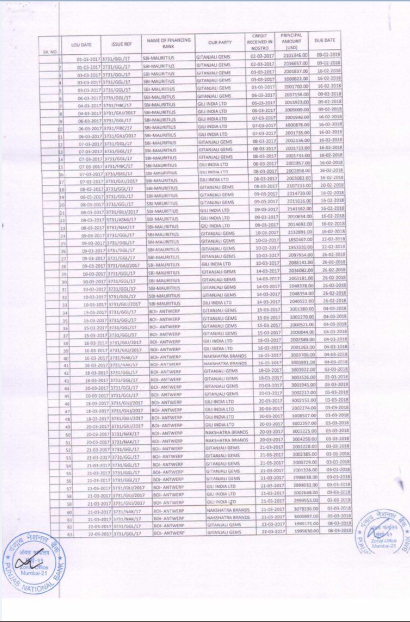 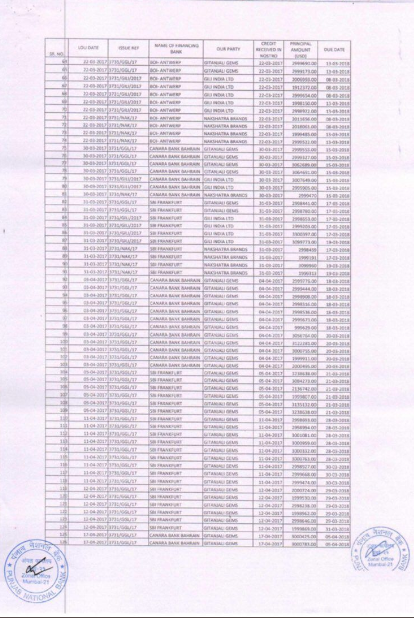 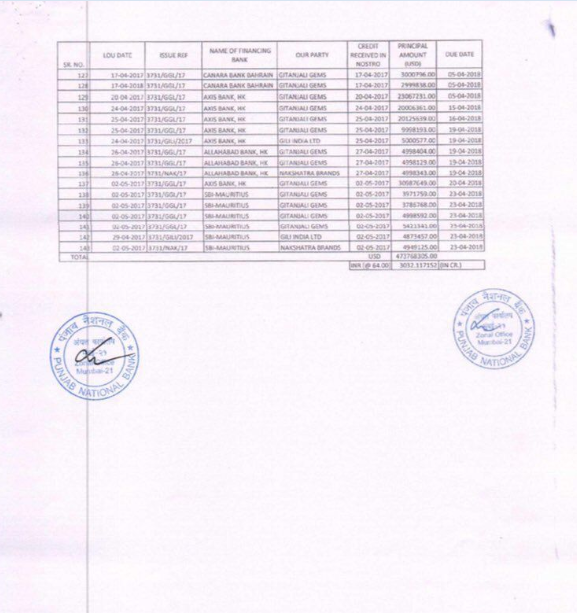 Meanwhile the Bank employees who are not part of the privileged circle have been struggling to be heard. In a statement the All India Bank Employees Association has pointed out that the scam involves far more agencies and persons than the supposedly “two delinquent” employees of the Punjab National Bank alone. And pointed to the fraud involving the larger banking establishing, the regulatory authority namely the Reserve Bank of India, and the persona of Nirav Modi himself with his connections and hence “protection” guarantees.